Drew: Many fans were dismayed when DC spoiled the end of Batman Incorporated 8, but it really wasn’t just that they had made those spoilers available — it was that they made them unavoidable, popping up when you accessed their website with no way of avoiding the information. Sure, you could argue that the cover to that issue (which had, unfortunately, already been leaked) gave the ending away, but it’s not exactly like comic book covers have to be representing actual events in the issue. Case in point: Batman R.I.P., which — contrary to what the title suggests — [SPOILER] doesn’t feature the death of Batman. In fact, the well-known hyperbolic nature of comic book covers is precisely what made me so skeptical that Animal Man 18 would actually feature “the most TRAGIC DAY in the life of BUDDY BAKER!” (Spoilers after the jump)

Turns out, I was wrong about that one, much to my reading pleasure. Any fans doubting DC’s ability to not spoil character deaths need look no further than this issue, which arrived with exactly no fanfare, in spite of the incredibly tragic (and surprising) ending. Granted, “Cliff Baker” isn’t the household name that “Robin” is, but his death is every bit as heartbreaking — especially when his father just spent countless months trying to get back to see him.

The issue picks up as Buddy and Alec are leaping into the time portal created by the Parliament of Decay, landing Buddy back at the precise moment where Maxine was giving herself over to the Hunters Two. Buddy successfully prevents that from happening, but Socks is quick to point out that Buddy can’t defeat these monsters alone. Maxine steps up, and heals the Hunters back to human form, revealing them to be Taproot agents, and NOT former Avatars of the Red, like everyone thought. The villains vanquished, the Baker family heartwarmingly exchanges hugs and noogies.

That happiness is short-lived, however, as Ellen takes Buddy to task for putting them all in danger. Unfortunately, William Arcane shows up to put a rather fine point on her argument, killing Cliff.

That kind of post-climactic out-of-nowhere death scene is always a big surprise — I’ll spare listing any memorable ones for the obvious reasons — but it also runs the risk of feeling totally tacked on and arbitrary, a cheap ploy to turn a happy ending into a tragic one. What really sells it here is just how well we’ve gotten to know Cliff (stupid haircut and all) over the past 18 issues — and the fact that his death will have a profound effect on the series going forward.

Earlier in the issue, Buddy reminisces about Cliff’s early childhood, specifically about a how-to book of finger paint animals that Cliff loved. At the time, it seems like a clever (and effective) way to tie Buddy’s powers to thoughts of his family, as he drew strength from those memories to call forth animal abilities. In light of the ending, however, those memories take on an added poignancy. It’s a beautiful idea (one I suspect may have some autobiographical significance for Jeff Lemire), but I’m most impressed by the subtle way it emphasizes Buddy’s relationship to Cliff just in time for the unthinkable. It’s a key structural component of this issue, but it’s so well disguised as a character moment (and so well complicated by that foreshadowing) that I didn’t even notice.

Buddy will obviously be devastated by Cliff’s death, but I suspect that might not be the only family member he’ll lose as a result of this issue. Ellen had already had it with the danger that seems to follow Buddy everywhere before this tragedy, so it seems clear she’ll blame him for Cliff’s death. The prospect of loosing Ellen and Maxine — in addition to Cliff — is particularly devastating for a man (and a series) so defined by his family. More importantly, Buddy’s experience in Rotworld found him placing a renewed emphasis on the importance of his family, asserting that “they are all I care about now.” I’m not sure what Buddy (or this series) will look like without his family.

What I am sure of is that shutting Buddy out of her life won’t solve Ellen’s problems. Sure, Buddy often speeds headlong into dangerous situations, but Maxine is the one with the target on her back. In spite of all that has happened, Ellen hasn’t quite been able to accept just how important (and powerful) her four-year-old daughter really is.

Maxine is the most powerful animal on Earth, but Ellen can’t help but see her little girl. She wouldn’t let her use adult scissors, let alone fight undead monsters. It’s a large, operatic tale of parents learning to let their children take risks, which I’m maybe also sensing some autobiographical significance for.

Okay, Shelby one last point before I turn it over to you: Steve Pugh is an absolute rock star — the horror is appropriately horrible, the layouts are propulsive, and the acting is spot-on. I could single out every single one of his panels for something I loved, so I’ll just point out how expressively anxious Ellen’s hand is in the above image. Colorist Lovern Kindzierski deserves equal praise for the subtle, detailed colors that make this issue such a pleasure to look at. Shelby, I know this is a super down issue, but maybe I can set you up on a positive note with the artistic team? Aren’t these guys nailing it?

Shelby: Absolutely. I feel like the whole creative team, both here and over at Swamp Thing, really brought out their A-game for these issues. Pugh has always impressed me with both his gore and his expressive characters, but I would be remiss to not point out the guest artist on the cover, one Jae Lee. I was actually pretty disappointed to see the text of the “most tragic day” added; the image alone is so haunting and so powerful. 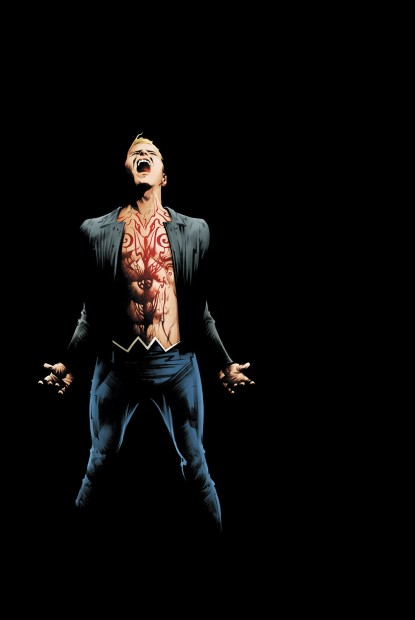 I’m most familiar with Lee’s style through his work on Ozymandias, where Adrian is depicted as haughty and cold. But here, the power of Buddy’s anguish is visceral and moving. It leaps off the page and cuts right through you. The empty background that Buddy is fading into, the tribal tattoo map to the Red, everything works together to create a depiction of a father’s grief which is awesome in every sense of the word.

As powerful as that cover is, I don’t think it’s enough to really depict what this is going to do to this family. Drew is completely correct; I did not for a second see this coming. I also don’t get the sense that Cliff’s death was tacked on just for the sake of drama; like Swamp Thing 18, I think the ending here grew very organically out of the Rotworld story, and provides the appropriate, though heart-breaking, closure that story demands. While I’m satisfied with the ending from a story-arc standpoint, I’m so concerned for the Baker family. Will Ellen and Maxine really leave Buddy? Or, perhaps sadder, will Buddy take this as a “lesson learned” moment and leave them for their own safety? Most importantly, where will this title go from here? We have been working towards Rotworld since issue one; now that it’s over, where will Lemire take this character next? I had never heard of Animal Man before this title, and if you tried to explain him to me, I would probably have thought he was stupid. “His name is Animal Man, and he has the power of …uh, animals!” But Lemire, you crafty dog, you win; I am a die hard Butter Baker Blondie Man convert, and I cannot wait to see what’s in store for him.