Taylor: Sidekicks are a staple of the superhero myth. Basically every superhero at one time or another has employed a trusty ally to help them battle evil and protect the innocent. The function of the sidekick can essentially be pared down to the idea that they help the titular hero off the comic pull of amazing stuff from week to week. And while it would be easy to think of this simply in terms of how a sidekick affects a storyline, they serve the dual purpose of making a comic more interesting to read. Just look at (SPOILER ALERT (kind of)) the recent death of Robin in Batman, Incorporated. This event came out of nowhere and shocked its readers, instantly making for a riveting issue. It can be argued that Batman, as a superhero, doesn’t really need a sidekick, he’s basically as tough as they get. But throw in the occasional sidekick (two of which who have died) and the story of Batman becomes instantly more interesting due to the wildcard that is a sidekick. However, in a comic entitled Dial H for Hero (my emphasis on hero) is it appropriate to explore the mythology of the sidekick? Dial H 10 answers that question with a resounding “YES.

Nelson, dialed as The Glimpse, is deep behind enemy lines trying to figure out exactly what the Canadian military’s interest in the dials is all about. However, the Centipede and a Canadian soldier dialed as the Bristol Bloodhound are onto him. It seems as if Nelson is about to be caught when he realizes that Bristol Bloodhound will listen to anything he has to say. Using this to his advantage, Nelson escapes from the evil clutches of the Canadian special ops and flees to safety. He and Roxie learn that the reason Bristol Bloodhound listens to Nelson is that he has a special sidekick dial which dials sidekicks instead of heroes, which forces him to obey those dialed as a hero. Using both dials, Nelson and Roxie go out to fight crime together for the first time. Meanwhile, the Centipede is busy uncovering more about the dials and divulges some intriguing clues as to their origin along the way.

Whereas previous issues of Dial H have primarily focused on exploring the mythology of superheroes, issue 10 is all about the role of the sidekicks in our collective psyche. Using what has become his typical finesse, China Mieville chooses to explore the role of sidekicks in a way that does not bludgeon the reader over the head with ideas. Nowhere does Mieville come out straightforward and say “this is what I think about sidekicks,” it just happens within the narrative he has constructed. Again, I think we have Mieville’s background as a novelist to thank for this artistry. As is frequently the case with Dial H, the primary interest in this issue lies in what is not directly stated. For instance, the character of Bristol Bloodhound is part dog, obviously.

While it would be easy to write that off as just another genius pun, there’s more going on here than we would first expect. Canines have been mankind’s sidekick since time immemorial and it’s fun to see that fact expressed here in Bristol Bloodhound. Not only is he a sidekick, but he is perhaps the prototypical sidekick. This seems to be a statement that sidekicks are not just something that came along with the invention of tights, capes, and masks. Rather, sidekicks are something humans have been familiar with since before we can ever remember. Boom – genius. And who says comics are just for entertainment?

The relationship between Roxie and Nelson is a further exploration of the sidekick. After learning that the dial they stole from the Canadians is a sidekick dial, Roxie decides that it would be good for both her and Nelson to try dialing at the same time. This obviously creates a source of tension for the two since both are used to dialing the hero. However, Nelson agrees to dial the sidekick since he recognizes that Roxie is probably the better fit to lead any dynamic duo outfit. 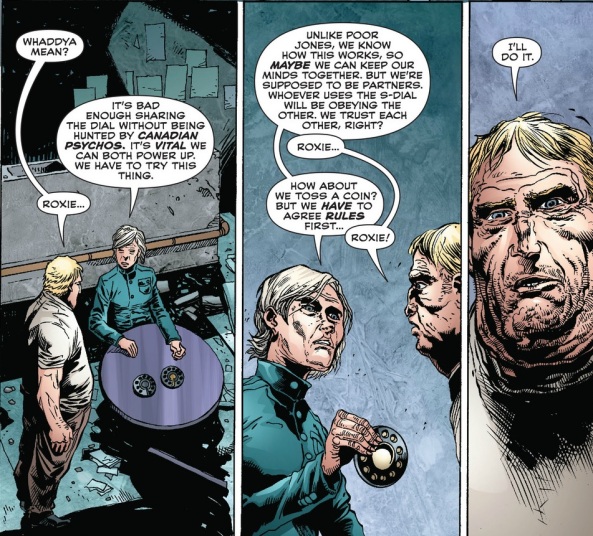 While this is admirable of Nelson and goes to show just how much he has grown both as a hero and a person, it makes for an interesting point regarding his role in the Dial H narrative. In theory, Nelson is the hero of Dial H. He’s who we’ve been following the entire series and in most cases he’s the one doing heroic and adventurous stuff. But suddenly here he is as a sidekick, willingly following Roxie and enjoying it greatly. If you quickly look back and catalogue the titles you are reading right now, how many of them are following a sidekick (this doesn’t include spinoff titles)? Right, none. Heroes have their own titles for a reason and no one is all that interested in what a secondary character has to say. If they did, then they would get their own series. In issue 10, however, Nelson essentially gives the hero reigns to Roxie, which is confusing given that the whole time we thought he was the hero. This raises the question, however, of what exactly is a hero? Is it the character performing the heroic deeds or is the person who is most interesting and which the comic focuses on? Wait, when did we stumble into a class on literary theory? China Mieville, you old dog! You’ve done it again – created another issue that is not only entertaining but also a commentary on comic books and storytelling. Fuck, I can’t wait to see what happens in the next issue. What will be asked to consider next? Speaking of which…

SHELBY! As a sidekick in my personal narrative I’m curious to see what you thought of this amazing issue. Can you believe that kiss at the end?! What effect will this have on Nelson and Roxie’s relationship? Also, all that background information that the Centipede dug up on the dials is pretty incredible and I didn’t even talk about it. What’s up with all that?

Shelby: I know the surprise kiss in the last panel is a pretty standard cliffhanger. It creates that “what the WHAT?!” reaction that keeps the reader on pins and needles until next month. I know all of that, but I still fall for it every time. There’s been a weird tension building between Roxie and Nelson for ages. They’ve grown close as colleagues  and friends, and there’s definitely the adrenalin rush that comes from fighting together as costumed heroes; in retrospect, it’s really not so surprising after all. I do find it interesting that Mieville decided to wait for them to finally kiss until they had dialed into traditional-looking superheroes. I think that was smart for a couple reasons. It gives the characters plausible deniability; they can claim it was the heroes who kissed, not the two of them. It’s a little weak, but it adds some extra tension to their relationship, makes things just a little bit more complicated, and I like that. Secondly, let’s be honest: Nels and Roxie are a super non-traditional couple. An old lady and a young, overweight man is definitely not something you see every day, and I’m sure there are readers who wouldn’t be able to get behind it. Giving us a more traditional comic book depiction of the two of them together is probably a better way to introduce this next step in their relationship.

I’m really intrigued by the mechanics of this sidekick dial. It makes sense (inasmuch as any of this makes sense) that whomever dials S-I-D-E would feel an innate drive to be obedient to the hero; if you’re going to have two dialed-up supers working together, you’d have to have that obedience built in as a safety, to prevent the two from just butting heads and creating havoc. But what I really like is that the sidekick is unable to operate without a hero to guide him. This is really where the the sidekick dial departs from the standard hero/sidekick relationship. In any other comic book, the sidekick is able to function on his own; he’ll probably get himself into some sort of scrape that the hero needs to rescue him from, but he can make his own decisions. Maybe that’s the point Mieville is trying to make: sidekicks may make for an interesting story foil, but the only way they are truly efficient as a team is when the hero calls all the shots and the sidekick has to follow.

Mieville keeps raising the stakes of this story. For me, my main point of interest is still in the heroes dialed and the worlds they come from; adding the sidekick dial has basically doubled the things I am most interested in in this book. How fun would it be if Roxie and Nelson dialed up an actual team? More importantly, if there’s a sidekick dial, is it possible there’s a villain dial out there? What sort of rules of engagement would a villain have to follow?