Patrick: You can’t understand Rorschach. Sorry, it’s true. The character is designed to defy your analysis and your close reading. So why attempt to explore the character’s past in Before Watchmen? What do we stand to gain from exploring the abyss? Brian Azzarello and Lee Barmejo bring the Rorschach mini-series to a close without answering these questions, leaving us to ponder what we expected of this whole experience.

Last time we saw Rorschach, he was engaging in a full-frontal assault on Rawhead’s goons at their disco club / criminal hideout. One of Rawhead’s more capable henchmen, a blonde man referred to as simply “Lucky P,” subdues the rampaging Rorschach. They take Rorschach up to an apartment above the club, tie him up to a bed and remove his mask. Lucky P’s a little unnerved about the rioting and looting that’s going on in the streets during the blackout, so Rawhead makes a strange decision: he puts on the Rorschach mask and decides to fight crime. With Rawhead gone, Lucky P beings to torture Rorschach, asking repeatedly for his name. But as we’ve seen before, Rorschach doesn’t just give up that information. It’s at this point — as things look hopeless for our hero — that Rorschach’s luck turns on a dime. A brutal, hyper-violent dime. Rawhead’s tiger comes into the room and mauls Lucky P, giving Rorschach the opportunity to escape. Meanwhile, on the other side of town, Rawhead (wearing the Rorschach mask) is beaten to death by the very criminals he was trying to stop.

And if it sounds like Rorschach was inactive in the resolution of that story, get a load of this. The waitress is attacked by the Bard, but for all of his flesh-carving and throat-slitting, she survives and identifies the killer to the police — turns out that the Bard was a regular at the diner (just like Rorschach). The waitress leaves town, and the Bard serves three years in jail before being let out on appeal. In tidy epilogue, Rorschach finds the former-Bard and kills him, a full five years after he committed his last crime.

This issue is dense with some fairly complex thematic issues. It’s so thick, that I’m sort of at a loss as to where to begin. Brian Azzarello explores concepts of identity and the animal nature of man in really interesting ways. Just as a quick example: the rioters are animals — not only do characters in the story make multiple comparisons between the mob’s actions and that of wild animals, but the scene of Rawhead’s murder is mashed up with a scene of a tiger eating a man alive. It’s pretty clear: men = animals. But that’s also flipped on its head by issue’s end as those same rioters help the waitress as she stumbles free of the Bard’s clutches. I don’t want to undersell how powerful these in-narrative themes are, but I do want to steer the conversation back toward commentary on Before Watchmen in general.

At the heart of this issue is someone pretending to be Rorschach. Rawhead puts on the mask and feels emboldened to play the role. We talked about Rawhead’s disappointment at meeting Rorschach in issue 1 as an analogue for everyone who was disappointed at reading new Watchmen titles. There’s no denying that these are compelling characters, and it must be invigorating to suddenly be giving the keys to this universe. Azzarello — and the rest of the writers on Before Watchmen — are like Rawhead in that they see these amazing possibilities for new stories and new insights into the characters. 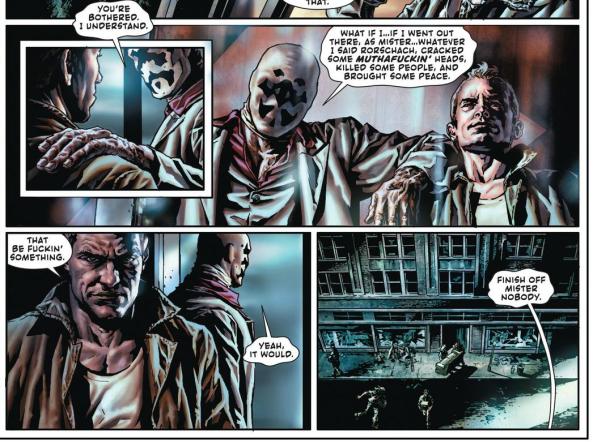 Look at that, Rawhead’s basically pitching a Rorschach story to his henchman. It’s also interesting that Lucky P tries to get Rorschach to explain why he fights crime. I mean, that’s the ultimate goal of these little character study pieces, right? In particular, that’s the promise of a prequel — you’ve seen the actions, now witness the motivation! This mini-series remains consistently obtuse in defining Rorschach’s motivations, and we’ve argued about what drives him in the comments of all three write-ups we’ve done so far. It’s important to us that we think we understand Rorschach, even as the character resists being understood. That’s how Moore wrote him, and that’s how Azzarello writes him here as well, as a damaged mind that he can never fully know. Lucky P expresses frustration with this character-type as though he’s an editor screaming about what this mini-series should be.

Lucky never gets an answer, and neither do we.

There’s another thing that Azzarello does — both here and in Comedian — that serves as interesting commentary on the whole Before Watchmen concept. Moore and Gibbon’s Watchmen tapped into the Cold War mentality that was present in the zeitgeist at the time the series was published. When we read Watchmen now, we do so with a safe distance from that period in time, and we have to bring in outside historical perspectives to really internalize the whole Doomsday Clock concept. We are forced to view Watchmen as a historical piece, with a specific historical perspective — that of the 1980s. Rorschach is a 1970s piece and Comedian is a 1960s piece, though there’s no world where we could have been reading these things in their appropriate decades. So when Rorschach encounters DeNiro’s character from Taxi Driver, or when Rawhead strikes a pose from Saturday Night Fever, we see a slice of history, and not a reflection of our current culture. Of all the writers on this project, Azzarello seems uniquely interested in the period during which his stories takes place.

There’s not time or space enough here to really do that subject justice, so I’m going to turn it over to you, Drew. What do you make of the whole Bard / Waitress story essentially resolving by itself? Or how about Rorschach’s new journal-writing practices? And what do you make of Rorschach’s criticisms of the waitress leaving to be a victim somewhere else? How’s this for an impossible prompt: what does Rorschach mean here?

“You d serve me.” It may be the last narrative Rorschach test we get to argue about — is he saying “you’d serve me” or “you deserve me” and what’s the difference?

Drew: I’m not sure we’re supposed to read those as separate — in Rorschach’s black-and-white view of the world, tolerating evil is commensurate with being evil, so “serving” is the same as “deserving.” Of course, it’s the notion of a narrative Rorschach test that really got my attention — I’ve always been too distracted by the black-and-white and symmetrical symbolism of Rorschach’s characterization to realize just why his ambiguity is so fitting. In my defense, I tend to assume the the audience is the one bringing an interpretation to a work of art, but I’m only now realizing the importance this has for Rorschach himself.

In hindsight, it’s always been there, staring me in the face. Rorschach is a grim guy, which gives him a grim outlook on the world. Part of why I missed it may be the pains Moore took to explaining why Rorschach is so grim in the first place — he sees the worst in people because he assumes the worst of people because he’s seen the worst in people. It’s a causal loop, but it kind of excludes Rorschach from the equation — it’s not about who he is, but about what he’s experienced.

Curiously, Azzarello does little to turn the camera back on Rorschach. Instead, the story is told from Rorschach’s perspective, as it was (uniquely) in Watchmen proper.

The voiceover from the journal does most of the work, but Azzarello and Bermejo can’t help but make it more explicit by giving us that binoculars view. We’re seeing the world through Rorschach’s mind, but more importantly, we’re seeing how Rorschach views the world.

Actually, that may explain why we saw Travis Bickle in the previous issue — it wasn’t that Watchmen and Taxi Driver share a universe, it was simply a reflection of the way Rorschach views the world. It could be that Rorschach has seen Taxi Driver, or it could be that this is simply a shorthand so we can understand the very specific private life Rorschach assumes of his cabby. Either way, I think Rorschach’s perspective played a bigger role there than we discussed.

I suspect that the last reason I was slow to appreciate Rorschach’s outlook as a reflection of himself was that closeness to his perspective. While Rorschach is quick to notice everyone’s unhappy recognition at the world around them, he seems utterly undaunted by his own emotional baggage. He never stops to question whether the bad he sees in the world is simply a projection of the bad he sees in himself. But then again, he doesn’t need to — that vicious cycle makes sure that he only ever sees the worst the world has to offer, such that his world really is full of violence and depravity.

Ultimately, that may be the reason Rorschach does what he does. Rorschach’s assumption that everyone around him is up to something wouldn’t be validated if he got a decent job — or even if he just allowed a kind-eyed waitress to be nice to him. He needs to be around criminals because he needs to believe everyone is as fucked up as he is. It’s a bit more willful than we tend to think of with Rorschach tests, but we’ve always known Rorschach was particularly willful.

Of course, the brilliance of Azzarello is that these are by no means definitive interpretations. I love Azzarello’s ability to write unwaveringly in the gray areas, but it’s particularly appropriate here, where our interpretations are the subject. It makes me especially glad, then, that I have a place like this to discuss our interpretations. I normally shy away from prompts for the comments, but with the emphasis here on Rorschach tests, I simply can’t help myself: what do you see?

18 comments on “Before Watchmen – Rorschach 4”