Mikyzptlk: Ah families, they come is all shapes and sizes, but they all have one thing in common. At the end of the day, they’ll always have your back. The Fantastic Four have always been Marvel’s First Family. Series writer, Matt Fraction, makes sure to keep that in mind as we go into issue 5. But how exactly does a family of space faring superheroes interact with one another and work out their problems? As it turns out, the same way that everyone else does.

In issue 5, The Fantastic Four head over to Rome circa 44 B.C.E. to drop in on Julius Ceasar. Unfortunately, it happens to be March 15th…yes, that March 15th. The Ides are upon our old pal Ceasar, but he’s prepared. As Johnny, Ben and the Richards kids head over to meet the famous emperor, Reed and Sue stay behind in the space-camper for “Mommy-Daddy Time.” Which, unfortunately for our couple, turns out to involve researching Reed’s illness and putting laundry away. Meanwhile in Rome, the remainder of the Fantastic Family meet Ceasar only to find out that he’s dead! It turns out that an alien time traveler went back to study Ceasar first hand but inadvertently caused his untimely (Pun? Pun.) death. In an attempt to prevent any further damage to the time stream, the alien being (who conveniently seems to be composed of energy) possesses the body of Ceasar and effectively takes his place. Once our heroes are caught up on who the new “Ceasar” is, they are ambushed by the Senate guard. As Johnny, Ben, and the kids are thrown to the lions-sorry-I mean fire demon, Ceasar meets his historically appropriate death at the hands of the Senate. After the Ever-Lovin’ Blue-Eyed Thing takes out Cacus, The Son of Vulcan, the gang meet up with Ceasar who is secretly not dead (‘cuz a the whole actually being an alien thing). Sue and Reed have been able to patch things up from their spat in the previous issue, and have agreed to truly work together to help find a cure for Reed. However, one major question now plagues Sue. 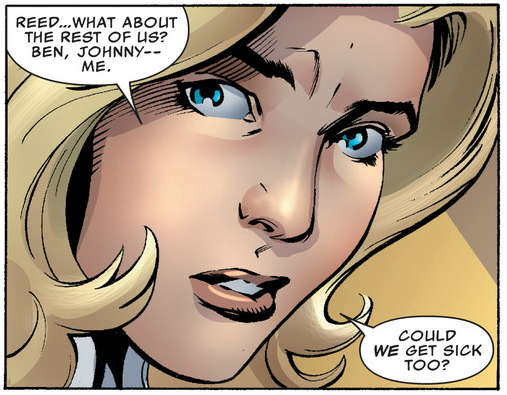 This series, and this issue in particular, is starting to remind me somewhat of one of my absolute favorite shows, Doctor Who. While it doesn’t quite succeed as well in the humor department as the British phenomenon, I’m really starting to enjoy seeing the Fantastic Four zipping around all of time and space. With this new premise, you never quite know where we’ll find our intrepid heroes next and I think that’s helping to keep everything fresh. To take that a step further, while I find the mystery of Reed’s illness interesting, I’m not sure I even need the plot point to enjoy this series. I don’t think I’d mind one bit if this book was about the family going out and exploring the frontier of space/time just for the hell of it. However, Fraction explores Reed’s illness further in this issue and wisely expands the threat to possibly include the others as well.

One of the reasons this book is working for me is because Fraction is making sure to tell us that, at its heart, this is a completely normal family that experiences the same kinds of problems, triumphs  and emotional highs and lows of any other family. Sure, they happen to be a family of geniuses and superheroes who can just as easily take a road trip throughout all of time and space as we can to the Grand Canyon, but Fraction ensures that we relate to these people by keeping them down to earth even though they are literally out of this world. The following scene cracked me up and is a good example of what I’m talking about.

The kids are chained up with Johnny and Ben and even though are presented with something that should be exciting and/or scary seem to be completely bored with it. It’s like they are saying “Are we done gladiator fighting yet? We’re bored.” I couldn’t help but be reminded of those times when my parents took me somewhere that was supposed to be fun, but, being so young, I just wanted to go home to play with my Ninja Turtles or SNES.

The overall tone of this book is fairly bright, cheery and optimistic. Artist Mark Bagley continues to be a good fit for that. His action is clear and easy to follow and I’m really enjoying his portrayal of Ben Grimm. Colorist Paul Mounts is also giving us some great work as well. His colors are bright and detailed and bring Bagley’s pencils to life. Just take a look at Rome below. Really makes me want to get out more. Well Jack, how did this issue strike you? I know you were behind on this series initially, but did you have a chance to catch up? Or did you even feel that you needed to? You seemed pretty content with this series beginning with issue 4, does that contentment continue with this issue? I didn’t touch on this too much, but how did you feel about “Ceasar’s” introduction in this issue? There was an epilogue bit at the end that suggested we may not be seeing the last of him. I’m certainly intrigued by this, but I’m not sure what to make of it as of yet. Any thoughts?

Jack: Mike, it’s interesting that you should mention Doctor Who. I had been thinking of exactly that comparison in the last issue. I think this series captures exactly that kind of pseudo-historic whimsy, to great effect. It’s a really liberated framework that doesn’t need a lot of extra context: simply take a moment in all of space and time-past and time-future that you think it might be fun to explore, and then plug your heroes in and watch them have fun adventures and narrowly escape re-writing history. There’s a fearless, indefatigable curiosity and wander-lust that keeps them eager to explore dangerous times and places, and, as you’ve suggested, Reed’s illness as a plot device is almost beside the point. To be sure, we don’t see comedic gold in every frame, but you know who’s as funny in print as David Tennant is on camera? No one, sorry.

Like Doctor Who, this series is meant to be experienced sequentially, but it doesn’t seem to matter that much if you don’t. Issues to stand up by themselves, and the larger story arc is almost impossible not to follow: the genius super-heroes traverse history in a space-ship ostensibly for fun, but secretly for urgently needed medical research. We don’t lose too much of our fun adventure-time on this larger picture, but we see just enough of it to squeeze in some character development. Reed Richards doesn’t know how good he has it, because I think in this single moment Susan trumps Rose Tyler and Martha Jones combined. 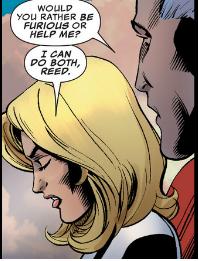 The alien-time-traveling Caesar was a trip, and the Shakespeare-based reveal was a very nice touch. The whole time-paradox plot device (“How do we alter the past without creating a rift in space-time?”) has been done to death, so it’s nice that although fake-Caesar has a healthy respect for the astrophysics of his predicament (and is willing to get stabbed a bunch of times for it), we don’t really need to build an episode around solving the problem.

I also just love how that portion of the story closes:  the kids show the same kind of enthusiasm they might use to describe a really fun day at an amusement park or the acquisition of some quirky new friendship. We have befriended another time-traveler, and he’s going to continue gaping at the Roman Empire from afar, while we move on to sample some other cosmic fare, and that same sense of the whimsical remains for the next adventure. 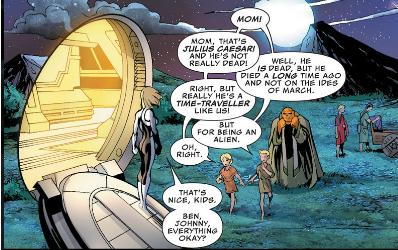