Jack: It’s hard work to start a sequel off with a credible voice. The expression that most often comes to mind is “Space Mutants IV:  the Trilogy Continues.” This is essentially the beginning of Batwoman’s second major story arc, and I am proud to report that J.H. Williams has risen admirably to the occasion. The grim mystery of Gotham’s missing children solved, this series hits the ground running with a new set of problems for our heroes, or at least a set of unsettling complications of all of their old problems.

Kate and Bette –- the newly revitalized but still green “Hawkfire” –- hit the trail against Mr. Freeze. Kate secretly has Agent Chase in her ear, as she is still being blackmailed into working for the D.E.O. in order to protect her father. Similarly, Bette has Jake Kane in her ear, and he can’t help but notice that Kate is acting downright fishy. Hunting Freeze is, after all, really more of a Batman thing. After the smoke clears, the Bat-Patriarch himself arrives on the scene to voice his disapproval for the damage they have done to Mr. Freeze and for essentially meddling in his affairs, and he correctly surmises that the D.E.O. has its fingers in this mess. Chase and Bones concoct a pretty sinister-looking scheme to ensure Kate’s allegiance. Meanwhile, Maggie scouts out an apartment that seems to suit Batwoman’s needs and Kate Kane’s wallet – seems as though she was properly enamored with Kate’s Medusa-conquering stunt last issue and answered her proposal in the affirmative.

That’s a lot of disparate threads, but they all come together nicely. They all smack of a pattern that cannot hold, a tiptoeing toward disaster. Kate and Chase cannot continue to hold one another in check. The D.E.O.’s machinations make even Chase’s blood run cold, and even at their best they spell nothing good for the Kanes. Neither of our young heroines can keep the puppet-masters in their ear secret or satisfied for very long. Bette’s inexperience is another catastrophe waiting to happen, and although her competence increases with each mission, there is some totally valid question as to whether or not her raw, unadulterated ego is sufficient motivation for the wide and perilous world of crime-fighting. 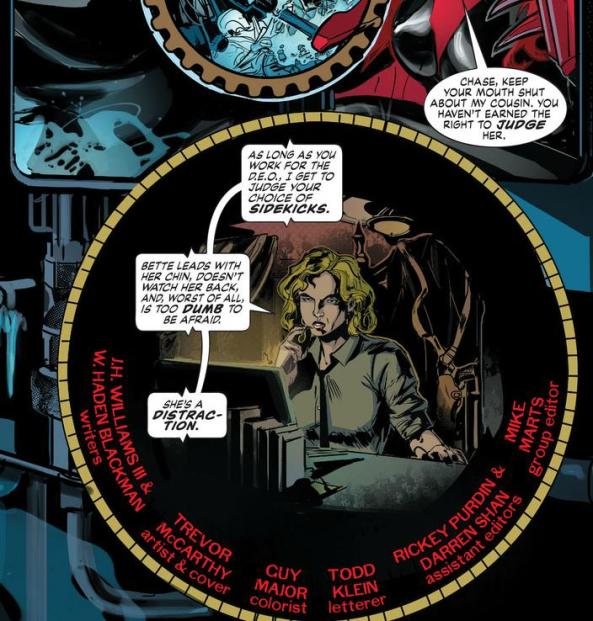 Even that sweet, apartment-hunting digression is kind of ominous. The property manager sympathizes with Maggie’s busy schedule, reflecting on the challenges of being married to a police officer. Kate’s own extremely dangerous, time-consuming obligations are waved away in a cautious understatement:  “She works nights.” It is hard to contemplate a future for them which does not draw Maggie into much greater danger than she would otherwise face.

Here, I’d like to turn things over to our guest-writer, Nate. How does the new thrust of the series strike you? What do you make of Bette’s progress? The current state of secrecy is, of course, unsustainable, but how do you imagine it collapsing? And is there anything in the future for Kate and Maggie besides crushed skulls and broken hearts?

Nate: Hi Jack—it is great to be guest writing with you, especially on Batwoman, which has consistently been my favorite title for, oh, 18 months now! Batwoman can go toe to toe with Batman and fight shoulder to shoulder with Wonder Woman, and has one of the best creative teams in comics. And even when J.H. Williams isn’t on art, Trevor McCarthy steps in with some fine work. What’s not to love about this title? And, yes, I am very excited about where this arc (and series) appears to be going. J.H. Williams has said this arc is going to really focus on family, and this issue is clearly just starting to put the pieces into play.

But first things first: I am totally bummed! This is the issue I have been most dying to read all month. After the big proposal in the last issue (take that, Orson Scott Card), I have been all giddy to see Maggie Sawyer’s reaction; that was the big reveal I have been waiting for forever. I so wanted to see how it went over. Unfortunately, issue 18 picks up some time after the proposal. I feel really let down, like when I was a little kid and wanted that BB gun for Christmas, and got Legos instead (though I bet I played with the Legos a lot more than I would have a BB gun…). But I REALLY wanted the BB gun! I do love that Maggie is looking for an apartment for her and her fiancé. Clearly she is all-in and has accepted Kate’s role as Batwoman. But I really want to see more of what has gone on with Maggie and Kate between the time of the proposal and the apartment hunt. 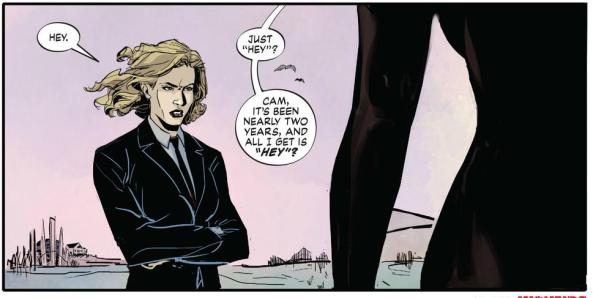 Speaking of time, it wasn’t clear to me how far in the future we have jumped. Has it been a few weeks? A few months? The last panel of the issue says it has been nearly two years, though it is not clear if this refer to time since the last arc, the time these characters have known each other, the time since they last saw each other, or maybe all three. Nearly two years seems like a very long jump for the story to have taken. And I would hope that Kate and Maggie have been moving faster than that (two years engaged, and only just getting an apartment together? Is Gotham in Utah?).

But then, who is the silhouetted woman in the image? Is this Alice/Beth (I assume she is the “party crasher” Bones sends Chase to retrieve), or a new player? And if it is Alice/Beth, and she knows “Cam” Chase as well (and for as long) as that panel suggests, what the hell does this mean? I wish I understood the timeline in the DCnU! Does this mean she knew Chase pre-Elegy? Did the D.E.O. set Beth up as the new High Madame of the Religion of Crime before the Elegy storyline? With all the serpent motifs around Bone’s big boat, who is Bones really playing with? Does the D.E.O. maintain a luxurious yacht called “The Serpent’s Wake?” If it is Bones’, I bet he didn’t get a boat like that off government pay. Are they all connected with the Religion of Crime? The mystery is getting thick, and now I am REALLY looking forward to the next issue to hopefully get some answers.

I loved seeing Bette back in action. Poor Freeze! It was a bit jarring seeing Freeze taking on The Birds of Prey team the same week that Batwoman was kicking shards of ice (is that what that was?) through his thigh. Batwoman and Hawkfire handle him pretty effectively, though, and it was a great way to show the two parallel “handlers” behind the scenes.

I also loved that Katherine busts Colonel Kane for what at first looks like an affair, but turns out to be his training of Bette. She also notes, “she is not the first, is she?” That her response is concern for the “girls” rather than anger or betrayal or anything else is actually pretty cool. I love the characters being developed here — the whole Kane family, which will hopefully soon include Maggie Sawyer, and may just include Bones, and Chase for all I know! So I am pumped to see where this next arc goes, and hope to see an epic family drama that stretches over another several arcs and really lets us see some of the (ahem) skeletons in the Kane closet.