Drew: Superheroes wear masks to protect their identities. The notion is that, by covering their faces, they will obscure who they really are. Of course, “who they really are” often has more to do with their actions than their names, which becomes readily apparent when another person steps behind the mask. The cops and villains of Gotham City all noticed a change in Batman when Dick took the reins, suggesting that much of the differences in Bruce and Dick’s personalities weren’t hidden by the cowl at all. At least Bruce and Dick are friends — imagine how apparent those changes might be if they were mortal enemies. That’s exactly the situation Superior Spider-Man finds itself in as the cracks in Otto’s facade continue to grow.

Issue 6 opens with Screwball and Jester — a pair of social-media-savvy pranksters — crashing a press conference at City Hall. The results aren’t so much threatening as they are embarrassing for J. Jonah Jameson, but he calls in Spider-Man, anyway. Otto isn’t inclined to devote his energies to something so trivial, but he does hate bullies, so he agrees to take the case. Bullying comes up again when “Peter” witnesses Anna Maria catching jeers from some lunkheads, which seems to bother Otto much more than her. Their meeting is cut short when he’s called away to apprehend Screwball and Jester, but he makes a pit stop to cram the lunkheads into the trunk of their own car. The folks in the area are rightly horrified, but not nearly as horrified as those watching Screwball and Jester’s live feed, where Spider-Man beats them mercilessly. Amongst those watching? The Avengers, who agree that they need to bring Spider-Man in.

Otto really flies off the handle at the end, but writer Dan Slott does a brilliant job of leading us there, step by step. Seeing Otto’s history with bullying makes his own actions more understandable (I was particularly enamored of his slip-up when he agreed with Jameson that Spider-Man is a bit of a menace), making him almost sympathetic. I can totally understand that Otto would have some revenge fantasies built up, but the thought of enacting them — or taking them out on other people — clearly crosses a line. Slott emphasizes this in the reaction shots to the video of Spider-Man beating Screwball and Jester. 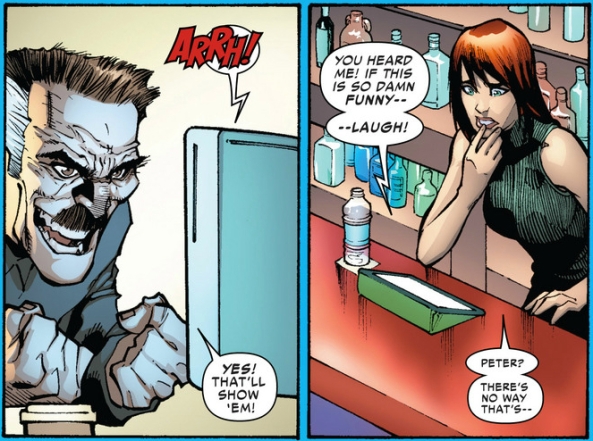 Jameson is totally cool with this, but Mary Jane is so disgusted, she seems to suspect that something is amiss. Anna Maria is also horrified at Spider-Man’s actions, though she doesn’t know he’s responsible (or that Peter is Spider-Man).

Actually, it seems that Otto’s impersonation of Peter isn’t holding up with the people that know him. On one end of the spectrum, you have Jameson, who doesn’t know or particularly care about Spider-Man, and who is willing to accept that everything Otto has done as the actions of the same man. On the other end, we have Mary Jane, who knows Peter well enough to know that he would never behave this way. Somewhere in between, we have the Avengers, who have noticed that something is up, but haven’t suspected anything close to a mind-swap — they seem to think he’s just a little unstable. In all the places where Peter’s personality might have shown through the mask, people are noticing that something is amiss.

What really fascinates me about this issue is the complexity of the morality at play. Yes, obviously Otto’s reaction is inappropriate, but he was actually pretty sympathetic for much of this issue. I don’t want to accuse all comic book fans of being victims of bullying, but I do think the kind of morality we’re used to getting from comics makes us empathize more with the victims of bullying rather than with the bullies — we respect the great responsibility that comes with great power. That is, Otto’s reactions here aren’t incorrect in type, just in degree, which is a lot harder to parse. Did he cross the line with punch one, punch ten, or punch fifty?

This may start to tilt at the limitations of superhero comics in proscribing moral actions — we might understand that violence is not an appropriate solution, but Superman’s got to punch something — but I think it also gets at a more universal moral of not becoming your own worst enemy. Otto agrees with Jameson that Spider-Man is a bit of a bully, but then goes on to become the bully himself, throwing around his power with little regard for the people he harms. It’s hard not to see the similarity between Otto at the end and the bully from his memory. 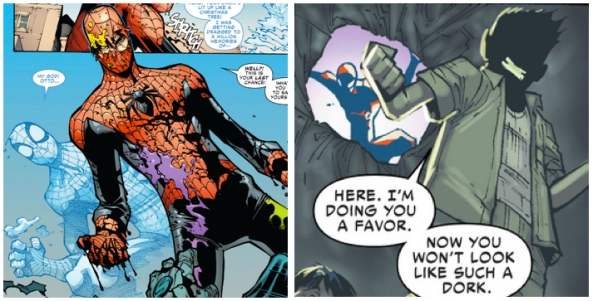 Penciller Humberto Ramos makes the comparison quite explicit — he shoots both from a low angle, standing over their victims, both are brandishing their fists, heck, they both even have ghost-Peter staring over their right shoulders. There’s no indication that Otto yet sees the similarities, but the chance that he might does offer some hope for his character.

With that, I’ll turn things over to guest-writer Freakin’ Animal Man, who you might recognize from his previous guest appearances on Grifter 0 and the Superboy Annual. While your writing was great on those, the comics themselves were not, so I’m excited to hear what you thought about this one, which I actually liked quite a bit. Did you have as much fun with this issue as I did?

Freakin’ Animal Man: I’ve written a few articles for you folks here, and despite even getting to write an Animal Man article, this was my favorite review. I’m going to say right away, my first read through, I didn’t like this issue. It was moving really fast for me, and the sight of ghost Peter always rubs me the wrong way. So I’m going to start with my negatives.

I could be wrong, but I feel like I’m in the minority when I say I liked the end of Amazing Spider-Man #700. It was really a fun dive into trying something radically new. I liked the idea that Peter’s consciousness came with the body and that we’d see a change in Otto. It’d also give way to a new Spider-Man. In many ways we’ve gotten that. It seems, Drew, that you seem to like the pacing of Otto being revealed to Peter’s friends. If so, we might disagree. I felt this could’ve been stretched for a much longer time. I felt a year of Otto trying to make Peter’s mind a home could show his transformation of the conflicted character at the end of #700 to everyone’s favorite Octo-jerk hiding in Spidey’s tights. The thing is, we’re 6 issues into this series, and I’m skeptical we’ll get to 10 issues before good ole’ predictable Peter Parker is back in action.

And when it came to the inevitable return of Parker, I wanted to give the series some credit. When Peter died in Otto’s body, I can name a dozen people who called that he was hiding in the back of his own body’s mind as a spirit of some sort to hang around and find his way to gain control again. 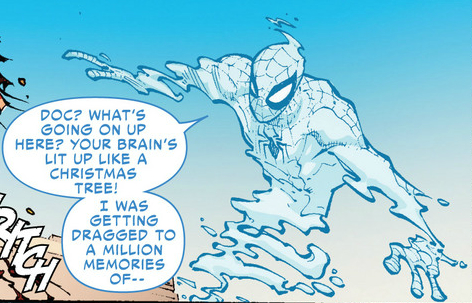 The only reason I didn’t share that prediction was that with such a neat twist at the end of #700 they wouldn’t go for such a obvious cop out. I feel he’s been the weakest aspect of the Superior series so far.

It’s time to stop being negative, because I sat down, read this issue a few more times after my initial look through, and I have to say this is probably my favorite issue of Superior Spider-Man. For the most part, Drew says a lot of why this is brilliant, but let me try to add some of my little touches. First off, I said before I’ve disliked Parker following along behind like he’s trying to get Otto to know the true meaning of Christmas. So, as if he was reading my mind, Dan Slott takes our bothersome ghosty and puts him through Otto’s mindscape. Instead of being a dull obvious narrative of admitting that Doc Oc’s Spider-Man is more clever but is definitely more immoral (to which every decent fan out there rolls their eyes and cries “duh”) he’s  deep in Doc’s memories of being a chubby nerdy kid. Using Ghost Parker as a device to reason with our criminal mastermind instead of being Captain Obvious to Doc’s every movement is an incredible improvement. It even makes the reveal of the broken and bruised villains at the end to Peter even more entertaining.

You talked about the necessary violence in super hero comics, Drew. This is true, you go too far, and you begin to sympathize for the enemy. In books like Punisher MAX, the goal is to realize why Punisher is so damn scary is no matter how little you were involved in the crime at hand, you’re boned. Spider-Man as a series has been great to remind us what separates people like Spidey from others like Punisher. Peter only fought as hard as he needed. To what I remember, Spider-Man’s enemies only really got bloodied if they caused him to spill any. Otto has gone too far and that ratio is greatly altered, which really shows that he’s gone off the deep end. In fact, look at that scene where Otto stands over Screwball and Jester. The imagery there is remarkable. Doc’s hands are caked in their blood, and he himself is covered in playful prankster paint, but otherwise untouched.

On the topic of imagery and art, I want to touch on this quickly. I used to dislike ASM art, I found it somewhat childish and a little too cartoony. But I’ve really come to realize that Humberto Ramos does two brilliant things at once. One, Spider-Man is in a different demographic, as he definitely appeals more to the younger kids as well as us older coots. This art is definitely less serious than, say, Fury MAX or Sin City, but Ramos keeps it stylized for us and approachable for the younger folk. Second, I constantly find myself complaining about the lack of expression in comics. It’s usually easy to find scorns and shocks of surprise, but finding a comic that can deliver laughing faces as expressive as the pissed off scowls deserves praise, and you find that in spades in #06. 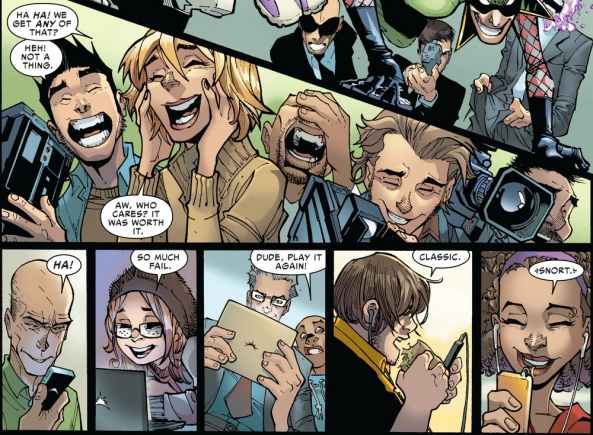 Building on that, I want to end on this on my favorite part of this issue, the pacing. This issue really gives us a full platter. If you kept up with the series, then you start off very uneasy aware of Otto’s previous execution. Then we’re watching Hobgoblin brood like he’s getting ready to get his sinister on, followed immediately by Jameson getting a pie in the face. I’ll cut the overview short and tell you to read it. Try to recap it to someone and you’ll realize how much Mr. Slott and the gang were able to cram into this issue, and yet I never felt it was rushed. Any sense of being rushed was more because the life of Spider-Man is in constant motion, and that felt natural in this issue. I’ve had my gripes every now and then with this series, but really this is an incredibly satisfying issue.

Freakin’ Animal Man is a superhero with too much time on his hands. If he’s not saving the day from animal zombies, he’s reviewing comics and pretending to be vegetarian. You can read more of his material at @FreaknAnimalMan on the Twitter.

18 comments on “The Superior Spider-Man 6”