Today, Shelby and guest Pivitor are discussing New Guardians 18, originally released March 20th, 2013. This issue is part of the Wrath of the First Lantern crossover event. Click here for our First Lantern coverage.

Shelby: Be true to yourself. It’s the sort of lesson a pre-teen protagonist would learn at the end of an after school special about peer pressure or cliques or something like that. Disney Channel-sentimentality aside, the idea of recognizing who you are at your core is an important one to me. It took me about 28 years, but I think I’m finally figuring myself out, finally learning what really motivates me to be the person I am. Is this core me something that I’ve always had inside me, or has the life I’ve lived shaped it? If my life had taken a number of very different turns, would I be a completely different person, or would this core me be the same?

This issue is divided into three chunks as Volthoom plays with Carol, Saint Walker, and Larfleeze. He gives them each what he thinks would make them happy, kind of. Carol’s alternate reality has her never giving up her dream of piloting jets, but that means Ferris Air was liquidated and her father blamed himself and took his own life. As a Green Lantern, Saint Walker was able to save his planet and family, but that didn’t stop the Guardians from unleashing their Third Army. Larfleeze got his family back, but he was still a greedy bastard, so Volthoom tried making him a Blue Lantern instead. No matter how hard Volthoom tried, he couldn’t convince any of them the reality he made for them was real, so he decided to bail and get all emotionally powered up from Attrocitus instead.

My biggest complaint with Green Lantern Corps 18 was that it was treading water with the whole “look how your life would have been different” schtick. While that is basically what’s happening here, I think Tony Bedard has executed the idea in a much more interesting way. Instead of Volthoom just rifling through all the New Guardians’ life options, he’s actually trying to find one to stick with. Bedard is making more of Volthoom’s motives; he’s not simply trying to torture our heroes, he is just looking for some good tastin’ emotions to munch on. The idea that there would be various flavors to the emotional spectrum is interesting, I think it better explains why Volthoom is manipulating everyone the way he is. He could just feed off the emotions they provide, but he would rather have something stronger and tinged with despair. I like the idea, not only does it make sense that avarice would be the grossest emotion, we also get this hilarious sequence of Larfleeze being unable to give his son a birthday present.

Another reason I think Bedard is successful with this issue is that he’s exploring a little bit more of what makes these characters who they are. It’s all well and good to see how John’s life would have been different if his mom hadn’t been assassinated, but I’m much more interested in seeing how Carol will always be motivated by love. That’s where Volthoom is failing with these three; no matter what he does to their reality, he can’t change who they are at their very cores. If Carol isn’t motivated by her love of Hal, then she’s motivated by her love of her Air Force unit. Saint Walker may have the strength of will to save his planet, but when it comes down to the wire it’s always hope that gives him the most power. And Larfleeze is just a greedy bastard, and there’s nothing in the ‘verse to change that. I like the idea that, no matter how differently these people’s lives would have been, they would have always been driven by these same emotions. It’s a comforting thought, actually: the idea that no matter how turbulent the world around you, the one thing you can always count on is yourself. It makes me a little interested in how Volthoom’s encounter with Attrocitus will go down; would Attrocitus have ever become a Red Lantern if the Manhunters hadn’t killed his family? Is he the exception to the “be true to yourself” rule? More importantly, do I really care enough to sit through a whole issue of Red Lanterns?

Even though Bedard isn’t breaking any new ground with this issue, I don’t feel our time here has been wasted. We’ve gotten a better grasp of our villain’s motivations, as well as learned more about what really drives our main characters. This issue doesn’t totally restore the Wrath of the First Lantern momentum that we lost in GLC 18, but it’s definitely a step in the right direction. What do you think, Piv? Were you interested in learning more about Volthoom’s plan as well as what drives the New Guardians, or did you think this issue was just treading water?

Pivitor: Well Shelby, I’d have to say that my answer is a resounding, decisive…both. In terms of the larger Wrath of the First Lantern story-line this issue is definitely treading water, but in a way, I feel like the entire crossover has been treading water. We’ve  only gotten one issue that attempted to move the actual plot to defeat Volthoom forward (Green Lantern 18); the rest have largely come across as stand-alone issues, and while some of them have been quite successful, they’ve done little to progress things.

This slow burn can be frustrating, and I’m a little worried about the crossover’s resolution being rushed as a result of its slow start, but for now I’m trying to just sit back and enjoy the ride, because the actual stories contained within this issue are a lot of fun.

While I enjoyed all three stories, the Star Sapphire segment is easily the most meaty. Even if we ignore the subtext Shelby explored so well and its connections to Volthoom and his machinations, it still stands alone as a competent Independence Day-style war story. The conflict between Carol and Hal lead to an interesting conclusion—Carol’s sacrifice and the motives behind it—and while I’m on the subject, how cool is it to get so many stories told from Carol’s point of view recently? Even though I’ve never been a huge fan of Hal Jordan, his and Carol’s relationship has been growing on me as a result.

What I am a big fan of is Hendry Prasetyo’s art in this segment. His anime-esque character designs are quite dynamic (just check out Hal’s profile above), and he gives us a large variety of effective facial expressions, from Hal and Carol’s intense frustration to the goofier, more amused expressions of their onlookers. Meanwhile, Javier Pulido’s art on the Saint Walker segment features a few inventive layouts, and even reminds me of Darwyn Cooke in places, and that’s a high compliment. His energetic and bright style fits Saint Walker; likewise, Jim Calafiore’s grittier art suits Larfleeze and his story.

Dividing the three artists’ work between the three different story-lines prevents the shifts in style from being too jarring, but I was slightly distracted by the various artists’ drastically different interpretations of The First Lantern himself.

I’m sure most of this can be chalked up to the artists’ different styles, and no doubt Volthoom isn’t easy to draw, but still, these are all some oddly diverse versions of the same character. As a villain who can manipulate the world around him to his whims, it would be interesting if his abilities made his body a little unstable or something, though I admit I’m just guessing wildly here.

As for Volthoom himself, I’m honestly not too interested in him as a character yet. So far he’s been a more of a plot device than a character, and his plans are about as deep as a Sailor Moon villain’s; “I need to absorb emotions to power up for my final plan!” isn’t very far off from “I need to absorb energy to release the Negaverse!” after all, and the episodic nature of this crossover isn’t helping the comparison. I appreciate the thought Tony Bedard put into Volthoom’s methods—different emotions tasting better than others—but I’m actually more confused about his power set than ever. Up until now I had thought Volthoom was actually changing reality, but if so, than how can the New Guardians keep breaking free? How can he rewrite the past into three different realities for Carol, Walker and Larfleeze simultaneously? I’m almost starting to think that he’s just messing with his victims’ memories of the past more than anything. It should be interesting to see if any of this will be addressed in the future.

Anyway, Green Lantern: New Guardians has been mired in endless crossovers for months now, and has more than compensated by changing into a fascinating character study of Kyle Rayner. This month’s issue is no different, focusing its attention on what makes the other cast members tick. It’s more than worthwhile to pick up for that reason alone, but I still don’t know how relevant any of this is going to be when it comes time to take down Volthoom.

In the meantime, we’ve all been missing the most important event of this issue: the return of a long lost friend. 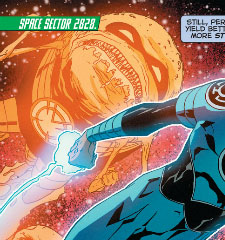 Pivitor has been obsessed with superheroes since he first saw the Adam West “Batman” series as a child. He spends way too much time online, especially on Twitter and Tumblr. You should also totally check out his potentially embarrassing old fanfiction, his “Flash Family: The Animated Series” pitch, and his band’s music video (he plays bass!).