Ethan: How do you handle a dangerous idea? When the structure of the atom began to unfold, when the concept of converting mass to energy began to surface, what went through the minds of those in the know? Looking at the far edge of the equations, where the numbers start to get really dramatic, what was it like to be one of the people who stopped and superimposed the idea of a fission reaction onto reality — the machines that might be built, the weapons that might be forged? The history of nuclear power and the tragedy of nuclear weapons is all around us now, but it wasn’t so long ago that all of these ideas were just scrawls on chalkboards and napkins. In fiction — and specifically the Marvel universe — big and dangerous ideas are molded into reality all the time, and whether the result is a marvelous new tool or a terrible doomsday device is entirely dependent on the person who controls that “a-ha” moment. In Indestructible Hulk #6, Mark Waid plays with his own microcosm of an arms race and drops the Hulk straight into the middle of it.

The issue picks up in the aftermath of the battle with Attuma’s forces. The Hulk sinks ever further towards the ocean floor, the Dreadnought (the Chinese underwater counterpart to SHIELD’s heli-carrier) is forced to pull away leaving only token surveillance. Attuma — the clear victor of the conflict — doesn’t seem quite as happy as you’d think he’d be; it seems the battle was just a distraction for him. Watching the Dreadnought limp away, Attuma reveals his primary goal: he is trying to reclaim Atlantis. The Lemeurian attacks on the surface world turn out to have been nothing more than the warlord flexing his newfound magical muscles as he looks for some gift, some idea, that will put him back in Atlantis’s good graces. While the villain lays out his vision, the Hulk is picked up by the Lemeurian resistance. After Bruce Banner awakens, he quickly gets up to speed on the situation with some help from his new allies. Looking through stolen intelligence, Banner discovers that Attuma’s ticket back home comes in the form of a weapon: the “quantum alchemy” product called alkahest is a substance that can eat through anything. Banner then leads the resistance fighters on a targeted assault to liberate their city, defeat Attuma, and secure the new weapon.

If all of this sounds a bit like a condensed version of your average blockbuster action flick, I’d say you’re probably not too far from the mark. While I think that there is some substance to be enjoyed in this issue, it took a little too long to get there. In the first few pages, it was the art by Leinil Francis Yu that kept me going, as he skillfully continues to explore the underwater themes of this arc. I love the kind of “undersea-punk” direction that Yu pursues with the vehicles and costumes. Comics have been a great medium for designers and artists to create fantastic spacecraft and spacesuits and space-habitats, but I haven’t seen as much innovation on the aquatic side of things. Yu has definitely hit the ground running though — the detail is wonderful: from the spiral contrails of bubbles streaming out the back of the rebel’s conch-shaped submarine to the badass armor worn by the rebel leader.

Now, Yu could have just slapped a basic streamlined spacesuit on this character, given him a harpoon-gun, and called it a day. Instead, we get a more thought-out, fully formed concept of what you might wear when traveling and doing battle underwater. The tubes and golden rings echo the hoses and brass of scuba gear; the overlapping materials on the thighs and shins look like gills; a circular structure on the belt is reminiscent of a pressure gague. Oh, and he’s got fin structures on his calves and he’s wearing a cape that looks like some kind of fishing net. Everything about this guy screams 20,000 Leagues Under the Sea taken to the power of Awesome.

With this kind of stellar visual support, Waid’s job is a little easier. Which is a good thing, because I get the impression that he ended up spending about one issue more than he wanted to on this whole Attuma thing. We get a bit of an overdose of some silly scenes between Banner and the buxom sea-queen Mara, I’m not really sure what the field of study called “quantum alchemy” is supposed to be, and the final fight between the Hulk and Attuma is pretty slapstick. The main reason that the issue ultimately holds together for me is the fight over the universal solvent alkahest. As soon as Banner figures out that Attuma is trying to produce this stuff, he immediately realizes that because it’s also buouyant, it’s intended function is most likely to wipe out the surface world. Obviously, such a threat can’t stay in the hands of a clear antagonist like Attuma, so Banner leads the charge to bust up Attuma’s lab. What’s really interesting to me is that A) from the conversation between Director Hill and Banner, we already know Banner already wanted to pursue research on Lemeuria, B) the new chemical weapon is a product of Lemeurian magic, and C) Banner exits this issue with the formula firmly in hand. 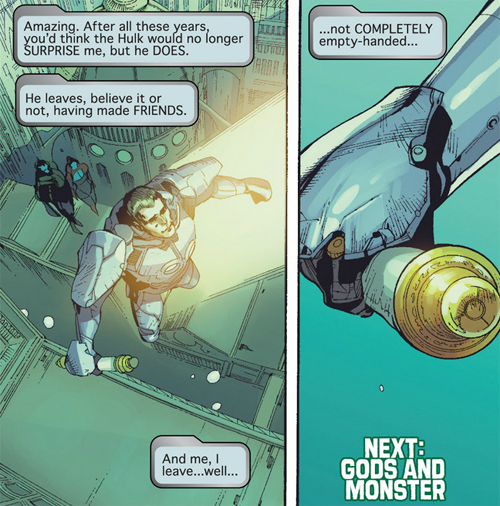 Even after recognizing the incredible damage that could be done with the stuff, Banner chooses not to destroy the details of how to make it. Maybe I’m being paranoid, but given that he was interested in exploring Lemeuria from the get-go, it seems like he got what he came for. But what practical application is there for a chemical that can eat through ANYTHING? How does that knowledge fit into the “Hulk Breaks, Banner Builds” mission statement? Even if we can trust Banner with the alkahest formula (which seems a bit iffy), can we trust his brand-new research assistants, too? What do you think, Drew?

Drew: You know, I hadn’t really considered the implications of having such a dangerous weapon, but  all of those people already have access to a big, green weapon, anyway. Sure, this Alcahest has the potential to end all surface life on Earth, but Banner specifically mentions transmuting the top mile of the Earth’s oceans — approximately five and a half trillion gallons. I feel like somebody might notice before anyone ever got that far.

Moreover, the successful execution of such a plan would be sufficiently horrible to deter anyone from actually pursuing it — including Attuma. Granted, we don’t know much about the Lemurian food chain, but if it’s like essentially anywhere else in the ocean, that topmost mile is vital to their survival. In fact, sunlight — the source of virtually all energy in marine ecosystems — only penetrates about a half mile, meaning the plan would effectively end all life on Earth. Sure, there are some chemotrophic ecosystems, but it seems unlikely that societies as large as Lemuria and Atlantis could survive on such slim pickings. I mean, what are we to believe, that this is some sort of a magic xylophone or something? Boy, I really hope somebody got fired for that blunder.

Sorry, I was having a little fun there, but the point I may have overstated there was that this is a very silly issue. Ethan, I totally understand how you might feel this Lemuria business might have overstayed its welcome, but I’m pretty sure Waid is going out of his way to make this issue as absurd as possible. The silly apocalyptic plot, the half-assed love triangle, hell, even the fact that he refers to the Dreadnought as an “underwater hellicarrier” all point to a very conscious effort to write in this protracted comic book-y style.

And what would the point of that be? Why, to comment on other comics of course. I can’t help but see this whole arc as a direct comment on Aquaman‘s recent Throne of Atlantis event. Both events feature Atlantis, surface worlds in danger, really macho dudes vying for power, and warrior women named Mera — er, Mara, but I guess you can only be so similar. The abundance and specificity of these similarities make it clear that this is no coincidence — Waid is going out of his way to make the comparison abundantly clear. Is this a challenge to Geoff Johns, or just a reminder that this Atlantis stuff is really silly, and maybe we should all stop taking it so seriously? I’m still not sure, but I absolutely love how much fun Waid has along the way.

I mean, come on! A submarine that can launch other submarines? Yes, please. Waid basically buries the needle of absurdity on this issue, which gives him free reign to riff on comics strangest indulgences. And as Ethan said, Yu is with him every step of the way. Normally, drawing this much attention to the rotundity of Mara’s behind would come off as offensive, but here, it feels more like satire. 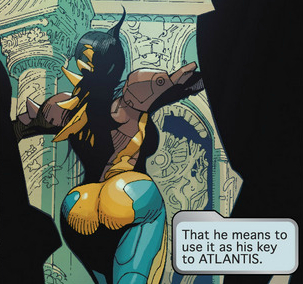 There’s never been any doubt that Waid has absolute control of the trappings of superhero comics, but I don’t think I’ve ever seen him embrace the zany quite like this. It’s a refreshing change of pace, and signals what I think is a great direction for a character like the Hulk — it’s not going to work if you take it too seriously.

Okay, but really, do you think the swipe at Johns here is good-natured, or what?