Patrick: How do you say goodbye? I believe that we don’t have a choice in matter — our goodbyes tend to come out in ways that most honestly get to the heart of our relationship with the person we’re saying goodbye to. There’s always a sense of obligation, like you’re trying to impart one lasting image of yourself in the person’s brain. Something to remember you by. While the rest of the Age of Ultron event seems interested in telling the stories of heroes pulling themselves up by their bootstraps, Fantastic Four lingers on goodbyes, and finds some touching honesty in the process. A point of clarification for anyone who might be reading Fantastic Four for its many charming virtues unrelated to the greater Marvel Universe: this is the Age of Ultron issue, and as such, it is anchored to this Terminator-esque future where the robots have essentially wiped up humanity and driven all the superheroes into hiding. This kind of story is going to — by it’s very nature — upset a few apple carts, but that upsettion is particularly pronounced in this issue. Matt Fraction’s secret formula of…

…is inverted, trading on tragedy and keeping the fun in the margins.

The issue starts with Sue waking her son up in the middle of the night to tell him that everything’s going to be okay. Then, while the children are asleep, Reed, Sue, Johnny and Ben return to Earth to help the heroes tackle the Ultron menace head-on. We only get snippets of their actual experience, but it’s mostly what we’ve come to expect of the Ultron occupation — a leveled New York City, heroes and villains alike murdered by machines. One by one, we see each of the Fantastic Four overpowered — everyone except Sue who is eventually rescued from the rubble by She-Hulk.

Back on the ship, Franklin and Valeria watch their family’s hologram-will. It’s unclear exactly what triggered the thing to play, but Frank and Val watch as it plays through goodbyes from Johnny, Ben and their father. Val notes that their mother didn’t leave them a message, but Frank knows differently. She did have a message: “Everything’s going to be okay.” Not only does this make for a heartfelt visual call-back, but we get one more great look at Franklin’s Human Torch PJs.

Sue is the only member of the original Fantastic Four that we know survives this encounter with Ultron. In Age of Ultron 3 (on sale now!), she specifically lists Ben among the dead, and she doesn’t elaborate on the fates of Reed or Johnny either way. That is a particularly gnarly turn of events given the up-until-now light ‘n’ fluffy nature of this series. As I mentioned above, it’s like the formula for this series is all out of whack. Incidentally, there’s also a new artist on the issue: André Araújo. Araújo’s art has a sketchy, almost impressionistic quality to it, that retains the comic realism of previous issues, but is decidedly softer. In fact, the whole thing feels and looks a little bit older, a little bit rounder, and a little bit more classic Fantastic Four. Part of this is because we’re actually seeing the core four in action at the same time — and in their standard uniforms — for the first time in this series. There’s also this delightfully soft tan gutter than appears on every page. The result is something so powerfully different.

But all these discrete changes serve to make this a very singular issue of Fantastic Four — I don’t expect to deal with the ramifications of this issue next month, and I don’t expect Fraction’s series to look or feel this way ever again. As a part of Age of Ultron, this issue ends up serving the opposite of its own self-stated purpose: “action/adventure with more adventure than action.” The stakes are never this high in the average issue. But that makes the deaths that we witness that much harder to swallow. If Age of Ultron is indeed ruin-porn (as Ethan suggested), then the loss of these three Fantastics is the antecedent to that indulgence of misery. The death of Johnny, Ben and Reed are decidedly NOT FUN events, no matter how appealing the concept of a robot apocalypse might be.

So: the goodbyes. That’s what we really have to talk about, right? They’re all remarkable in the ways they play to the strengths of the characters — and I find it fascinating that Reed has to write down “there is no god” for his kids. He’s never been good at expressing himself (much to Shelby’s constant frustration), but I always assumed it because of some weird emotional detachment. Here, it’s clear that he’s feeling too much to express it. The irony is, of course, that he built all this fancy hologram technology so he could deliver this message “in person” and still has to resort to the written word.

I found this issue to be oddly moving, but I suspect it’s because Fraction deftly shows the comforting reassurance of a mother’s love through Sue’s actually-in-person goodbye. She says that everything’s going to be okay, and when things are at their worst, that’s all you want — you want mom to say it’s going to be alright. It doesn’t matter how many enlightening life lessons everyone else will pass your way, “mom says” kinda trumps them all.

Jack! You’re not reading Age of Ultron at all! Pray tell: what was your experience reading this issue? Did Clayton Cowel’s ethereal colors sort of make this issue feel like some bad dream?

Jack: A bad dream, yes, exactly! And isn’t that the way all tragedies first occur to us? Every time that I have gotten catastrophically bad news — or even just moderately awful news — I have answered it with a full-throated, “That can’t be right.” Even as I prepare to deal with the fall-out, a large part of me is waiting to hear that it was all a nightmare, because these sorts of surreal rips in the fabric of my reality must not be possible.  This issue taps the “That can’t be right” impulse super-effectively.

Fallen skyscrapers strewn about like a tragic twist on an Escher sketch?  That can’t be right.  Super-heroes and super-villains laid to waste effortlessly?  That can’t be right. But the really troubling part, as we tremble in our fabulous Human Torch pajamas, is that the people we love don’t exist anymore, and while that elicits the fiercest, “That can’t be right” of all, that is the nightmare which is inevitable in all of our lives, and by which we have no business looking so surprised. 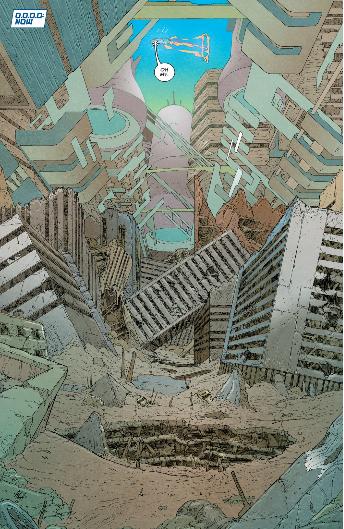 Johnny’s goodbye is cavalier, and in its own way, touching for its refusal to engage the gravity of the situation. It’s like a post-card from the 1920s or an advertisement from the 1950s:  it tells us the most about what the creator didn’t think was important enough to even mention. Apart from a token “Death is not the end” speech, he makes no attempt to pass on any greater wisdom. Life is already grand, y’see, and just because we’re at the end of the sidewalk, there is no reason to try to ornament it by superimposing extra meanings onto it.

Reed’s is unequivocally the heart-breaker, beginning with the matter-of-fact understatement, “How does a father say goodbye to his children?  Impossible.” His one-page epistemology equation is an interesting choice of final lessons, but I can’t say I could imagine a better one. Presence of mind and an urgent sense of accountability for the consequences of your actions — I am not sure that there are any better intangibles to share with the people we love.

And I think you’re right, Patrick. Val’s question — what will two shattered children alone in a spaceship, unsure of whether or not they’ve been orphaned thousands of light-years from home, do? — will not be answered in future issues. We will not live with the consequences of these plot points, because, well, comic books are not usually supposed to be that sad. This was a rockin’ stand-alone issue, but if I want to read something this sad in a relentless serial, I’ll go ahead and pick up a newspaper.