Today, Patrick and Mikyzptlk are discussing Green Lantern 19, originally released April 10th, 2013. This issue is part of the Wrath of the First Lantern crossover event. Click here for our First Lantern coverage.

Patrick: It’s hard not to see Volthoom as an author surrogate. This is a creature who feasts off the emotional turmoil of the Green Lantern characters and can alter their pasts with a snap of his glowing, iridescent fingers. So why is he the bad guy? Comic book fans are very quick to turn on creative or editorial teams when it seems like the choices they’re making threatens what the fans hold dear. Scott Lobdell mentions that Tim Drake was never Robin? “Oh fuck that guy.” Dan DiDio says the Crises never happened? “Well, he’s an idiot anyway.” Fans harbor such ire for creative missteps that it (unfortunately) makes sense to make the character who re-writes history the bad guy. But what about the writers we love – where are they represented? There are writers that live and die with these characters, why should they be solely represented by a universe-stomping big-bad? Green Lantern Corps 19 provides the antidote for just that.

The issue starts as basically every member of the Green Lantern Corps is trapped in the throws of Volthoom’s emotional attacks. Tiny rocks, sand and pieces of moss from Mogo — the sentient planet — cover the surface of Oa and all the Lanterns. Y’see, Mogo is using pieces of this own body to shield his friends, because you needed another reason to love Mogo. Once everyone is protected, Mogo brings all the Green Lanterns (plus Star Sapphire Fatality) down to his surface. Before they can bust out the keg and relax, Volthoom appears and creates Black, Yellow and Red construct-copies of all the Lanterns and sets them against the Corps. Exhausted, the Green Lanterns struggle for a while before finding the will to focus their attacks and strike back in a meaningful way. But then the construct-copies simply dissolve and scatter like dust in the wind. It turns out that Mogo was creating this scene to steel the GLC for the fight to come by pitting them against their worst character traits. Their will to kick ass restored, they all recite the oath (Fatality is evidently so excited, she forgets that’s not her oath). 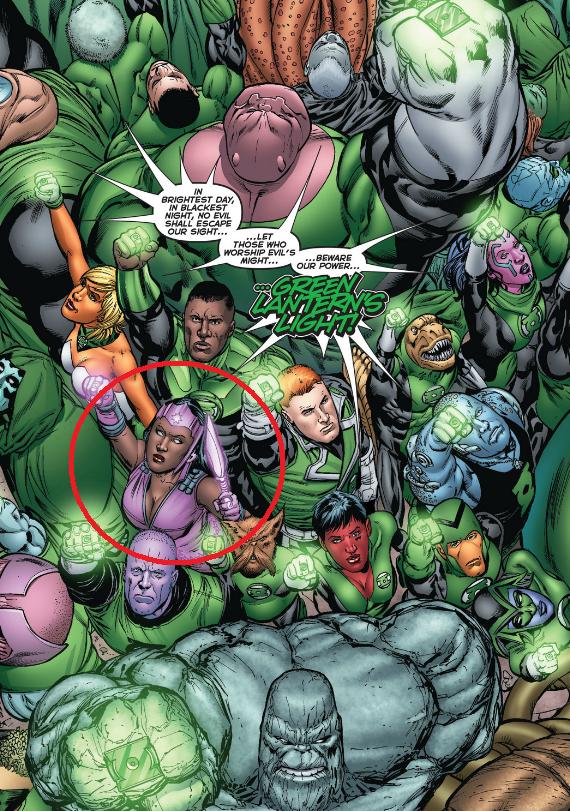 Artist Fernando Parasin and colorist Gabe Eltaeb effectively deliver a fireworks show in this issue. The central battle between Lanterns and construct-copies takes place over four consecutive 2-page splashes, and except for the beginning and end of the fight, the action is silent. Because the Lanterns are set-upon by copies that glow Red, Yellow and Black (which kind comes off more as blue here), these pages are non-stop spectacle – every panels is a violent burst of light and color. It’s also impossible action to follow the action. Occasionally, two or three consecutive panels will track the same encounter, but there are so many characters in play here — and every single one of them fighting a brightly colored version of themselves — that our best analysis of what’s happening here is “Oooooh!” and “Ahhhhh!”

These kinds of impossibly-busy splash pages have become staples of the events in the Green Lantern books. If you’ve read the Sinestro Corps War, or Blackest Night or even the Green Lantern Corps Annual from a few months back, then you’ve seen this sort of thing before. However, we’ve never seen this sort of thing for eight pages in a row. Writer Peter Tomasi may just be on a bit of a silent comic kick these days, but this mega-brawl seems like homage to the practice that’s been making Green Lantern fans gasp when they turn the page for over a decade.

My favorite part of this issue is the role that Mogo plays here. He’s essentially doing the same thing as Volthoom: presenting our heroes with horrible scenarios that may or may not be real. Unlike Volthoom, Mogo only has the best interests of the Corps at heart, and when he puts these guys through the ringer, he does so to strengthen them and prepare them for what comes next instead of wallowing in the past. I love that Tomasi’s still able to hit on big moments in several of these characters’ lives, but does so without having to literally reach into their past. Here are a few I saw (there are more I’m sure):

This very simple CHAINSAW FIGHT image calls to mind Guy’s brief history as a Red Lantern as effectively as any scene Volthoom dug out of his past. There’s no reason to explore why this period was bad – he’s literally confronting it right in this panel. And speaking of directly confronting something:

This one alludes to both John’s experience using the Indigo ring to channel the Black power of Death to kill Mogo AND snapping Kirtt’s neck. It’s a whole history of “doing what it takes” packed into this one panel. In confronting this head-on, in an active way where there are no negative consequences, John’s able get himself pumped for the final round of Lanterns vs. Volthoom.

And that’s exactly where I am right now: pumped. That’s what Mogo — as the new author surrogate — has done. Y’see, not all the writers are our enemies, some of them do have the best interests of our heroes in mind. Mikyzptlk, how did you feel about this issue? I get the sense that the big fight scene might be divisive – it’s a long time to go without anything “happening” — one could easily flip past those pages and fully understand the story. I see it as crammed full of character moments and pretty pretty colors. Where do you land on that spectrum?

Mikyzptlk: I did have that sense of “been there, done that” or, more accurately “seen this, seen that” but that didn’t stop me from enjoying all of the ring-slingin’ action that this issue had to offer. Nor did it stop me from marveling at certain, and I don’t think there’s another word for it, badass panels such as this one:

No, your eyes are not deceiving you. Kilowog is, in fact, pulling off his own head while simultaneously ripping out his heart. Now, I don’t know if this has any meaning thematically, as I don’t think that Kilowog really hates himself this much, but damn if that isn’t the most hardcore way to dispatch ones own self. So, Patrick, to answer your question, I did enjoy the character moments and the pretty colors, but I would also understand those who fault this issue for nothing “happening.”

However, for those of you who didn’t enjoy this issue for that reason I’d like to ask that you not fault Tomasi entirely for it. The reason being is that there are two common kinds of crossovers, those that use each issue of each series involved to advance the plot of the overall story, treating each issue as a new chapter, and those that only use the “main” title to drive the story forward, while using the “tie-in” books to explore the effects that the overall story is having on the ancillary characters. Geoff Johns and company has given us examples of both, but I think it’s safe to say that Wrath of the First Lantern fits the second kind of crossover I described. While there isn’t necessarily anything wrong with either type of crossover, it sometimes leaves the tie-in books feeling like filler, which can give the entire event a feeling of spinning its wheels. What keeps a tie-in from feeling that way is, often times, the quality of the issue. I think we’ve gotten a good mix of that in this event as, for better or worse, the premise has allowed us to dive into the minds of the main characters of each Green Lantern book.

So, while what we get here is ultimately more wheel-spinning in terms of the overall events going on in the main Green Lantern series, Tomasi pulls out all of the stops to give us one hell of a Lantern vs. Lantern fight that you almost need to wear sun glasses to see. Oh yeah, and we also get scenes like this:

Which brings us back to the idea of getting pumped that Patrick point out, because if Mogo doesn’t do it for ya then I don’t know what will! Tomasi has not only succeeded in getting Patrick and I excited for what’s to come, but he’s placed the GLC in the perfect position for the conclusion of this whole event. So, while we didn’t get much in the way of plot advancement for Wrath of the First Lantern (which I wasn’t expecting anyway), what we did get was a fun, action packed issue that has me ready for more. I’d call that a win.