Patrick: Before Watchmen: Comedian is so dense with historical and cultural references that it often comes off as clinical. It’s only upon peeling back the layers that the reader is rewarded with emotionally effective storytelling. The finale is no exception, so let’s cut the bullshit and unpack what just happened.

In light of his massacre of the village in Vietnam, Eddie is relieved of his duties in the war. When he gets home, Bobby Kennedy tells him that his actions are basically unacceptable and that he intends to blow the cover-up right after the election is over, win or lose. Eddie acquiesces, but only on the condition that he can make the confession himself. The next evening is June 5, 1968, and through the miracle of dramatic irony, we know that Bobby is going to be shot just after his speech. Blake also has this information because the night before, he met up with his good friend, G. Gordon Liddy.

The Brian Azzarello is careful to not ever definitively label this character as Liddy, but a bunch of key facts line up. A) his name is “Gordy” — not a particularly popular name. B) He left the CIA in 1962. C) He’s interested in Nixon’s run for the White House. D) That drawing really looks like the guy.

Liddy has a dossier on the assassin that’s set to kill Kennedy, and he shares the info with Blake — not because he has any affection for Kennedy, but because Kennedy’s assassination would / will effectively give the anti-war movement in America a martyr. When the assassin bursts out and makes his attempt at Bobby’s life, Blake takes him the Senator in his arms and shoots him himself.

This mini-series started off with a denial. The clues in Watchmen suggest (and the movie downright confirms) that Eddie shot JFK. Azzarello hit that rumor head on, saying that not that Eddie wouldn’t do that, but he just didn’t do it. In fact, he reacts to the loss the same way everyone did: he stopped what he was doing and asked “what’s this world coming to?” questions — and he was battling Moloch at the time. In effect, this series has been following Eddie’s trajectory from “incapable of killing a Kennedy” to “capable of killing a Kennedy” and all the political and psychological baggage that entails.

For all that we’ve seen of the development of Eddie’s raging nihilism, this is the moment that seals it. I might have prematurely called it in earlier issues — slaughtering a whole village of Vietnamese women and children sure seems like a total loss of humanity. That action — while obviously terrible — was part of what actually happened in the later years of the Vietnam war. The slog and fog of war led soldiers to make bad decisions. Eddie doesn’t even view the massacre as a mistake, after all: he was fighting a war. But when his last close friend asks him to come clean, admit his mistake and answer for his war-crimes, Blake strikes back.

And that’s actually where the motivations start to get fuzzy again. Is Eddie saving his own butt when he kills Bobby? Or is he offing him so Nixon can have an honest crack at the White House, and therefore utilize a more direct approach in Vietnam? Or or or, does Eddie see Liddy’s point about the assassination making his friend into a martyr? I trust that it’s kind of all these things at once — a perfect cocktail of Eddie achieving all of his concrete goals, and all he has to sacrifice is that last person who believed in him. I love how this is staged, with Eddie expressing his regret through pounding his head on the steering wheel to the sound of Dion and the Belmont’s “The Wanderer.” 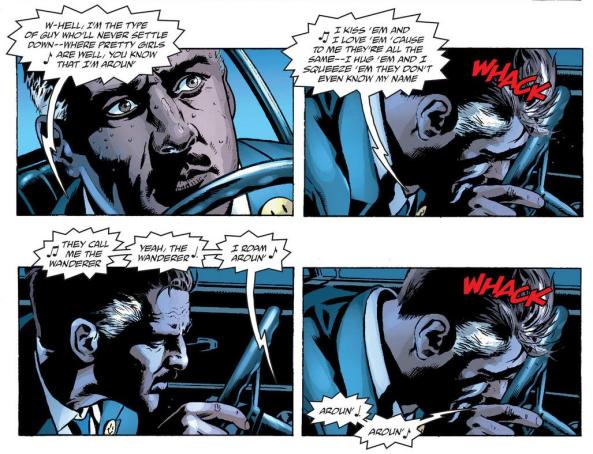 Drew, we’ve talked a couple of times about the use of music in these things, and we always have to shrug. You can make some connections, but more often than not, the songs leave a conflicting jumble of messages — particularly in issue 4, which straight-up combined lyrics to different songs. “The Wanderer” is poppy bullshit, with an underlying message about bopping around from girl to girl, and has little bearing on Eddie’s life, and no relationship with what just happened here. I can make a super-tenuous connection — that Eddie is also a man who refuses commitments to others — but that’s such a trivial slice of what the guy is going through. More likely, the point is that we always see movies and TV shows using music as a shorthand for specific eras — the 1960s in particular. But whatever good the songs do to place us in the correct date or frame-of-mind, they lack the nuance to actually explore what’s happening. This specific choice of song stands out as extra-irrelevant, calling attention to itself as inappropriate.

I’m going to pass it off to my esteemed colleague now, so he can have the final word on Before Watchmen. This series has been challenging, and though much of it has been maligned as “just another Vietnam story,” I’ve had an alarming amount of satisfaction picking this one apart. Both here and in Rorschach, Azzarello has proved that there are still deep, dark, messy concepts to explore with these characters. Oh, on that note — I haven’t mentioned the flashfoward to the 1980s (a decade which, oddly, gives the issue its title). I loved seeing Rorschach and Nite Owl, even if they’re really just there so Rorschach can ask the question we’ve been articulating for months: 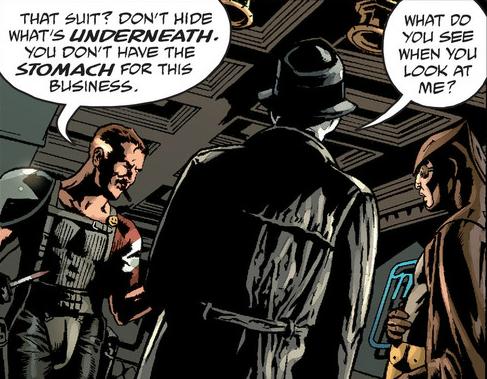 Drew: It’s a testament to how ambiguous this title is that we can’t agree on the facts of what we’re seeing. That scene can’t take place in the ’80s — Dan called it quits when the Keene act passed in ’77, and Blake would have that gnarly facial scar any time after ’71 (plus, it would be weird for Dan to think Blake should be in Vietnam when the war ended a decade ago). No, I don’t think this issue’s title has anything to do with the decade. Instead, I’m almost certain “Eighties” refers to the conspiracy theorists who maintain that the number of shots fired during RFKs assassination was more than could have been fired by Sirhan Sirhan’s eight round revolver, a theory that this issue (fictitiously) corroborates. Specifically, the eighties believe that Sirhan couldn’t have fired the fatal shot, which the coroner believed was fired from an inch from Kennedy’s head — just behind his right ear. 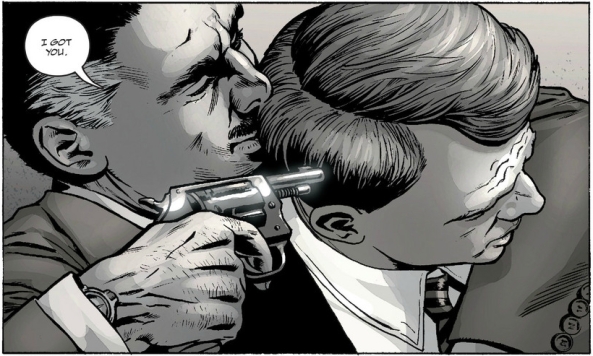 Actually, the assassination as presented here features elements of several popular conspiracy theories, from the CIA’s involvement to the idea that Sirhan was a brainwashed patsy. That synthesis is especially impressive when you consider that Azzarello is already beholden to both Watchmen universe history AND actual, non-conspiracy history. It’s no wonder we can barely keep our dates straight.

Of course, as we saw in issue 2, Azzarello is willing to take creative liberties with history when it suits the story. Or did we first see that in issue 1? Many fans were up in arms about the disavowal of Blake’s involvement in JFKs assassination, because, as Patrick mentioned, Watchmen kind of sort of suggests that he did. Just as a refresher, here’s the passage that makes everyone oh-so-sure Blake was the triggerman:

Blake sells it as a joke, which certainly doesn’t mean it’s not true, but what makes it important that it be true? That it reveals the blackness of Blake’s soul that he could openly joke about a man that he murdered? I think the notion of joking about the assassination of his best friend — one he was totally impotent to stop — is both subtler and darker. It’s darker still when you consider that Blake actually killed RFK, which would have to weigh on his mind as he jokes here — only five years after the events of this issue.

But why does he do it? Patrick, you list all of the reasons I can think of, but the thing that stands out the most to me is that none of them is a good enough reason to shoot your friend in the head. That’s the point. Blake so desperately wanted to get back in the fray that he sold his soul, which I think is exactly what we see as he bashes his head against the steering wheel. In that way, I think “The Wanderer”s theme of a man without allegiance is significant — though I think it’s a bit subtler than that. The song expresses its rootlessness with a kind braggadocio — Dion’s sluttiness is a point of pride. Blake — usually equally cocksure — is thrown into an existential dilemma at his own treachery, which I thought the song illustrated beautifully. Perhaps more importantly, it finds a through-line for the similarly existential crises we see Blake experience upon discovering Veidt’s island in Watchmen proper.  That is the piece of Blake’s characterization that never really fit, but Azzarello makes it clear that Blake hadn’t lost faith in all humanity, just his own.

Artist J.G. Jones makes some very subtle choices to illustrate just how significant this moment is to Blake. The whole assassination scene is set in sepia, which gives it an out-of-time feel, even when it occurs in sequence in the narrative. Of course, it doesn’t always appear in sequence — check out this side-by-side comparison of the flash-forward that opens the issue, and the same events when they occur later in the story: 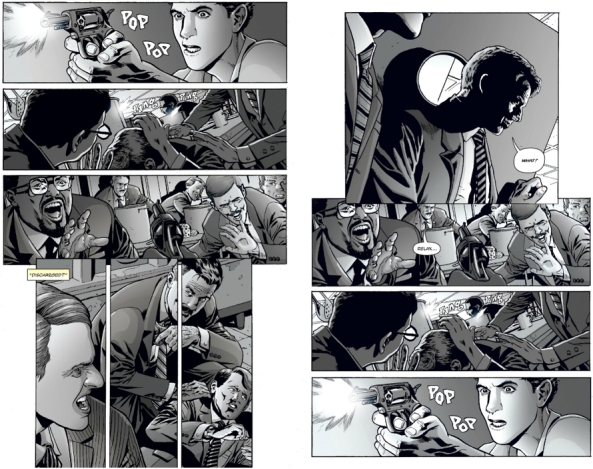 There’s an interesting reversal of the images, which can suggest the chaos of the moment, but the sepia coloring really drives home the notion that this is taking place in Blake’s head as he remembers and re-remembers the incident. It’s the biggest trauma we see Blake experience, and he’s almost exclusively responsible for it.

As we’ve seen elsewhere in Before Watchmen, it’s easy to botch this kind of character-focused prequel — how do you choose the moments that explain an entire character — but this series hasn’t missed a step. It was easy for us to declare each fresh horror as the genesis of Blake’s nihilism, but this issue finally gets us to the point where he might eventually break down in Moloch’s bedroom. Watchmen shows us he still has a long way to fall, but this mini does a great job of clearing that path. It’s a brilliant end to a brilliant series — one I can’t wait to read again.

16 comments on “Before Watchmen – Comedian 6”