Taylor: Cities are dirty places. Go to any major city and it’s pretty much guaranteed that you will see litter piled in gutters, blowing across streets, and randomly dispersed in unsuspecting front yards. It’s not that people in big cities like litter (does anyone?) or care about the environment any less than people in smaller urban areas. Rather, it’s simply a matter of when you throw a huge number of people together they create a huge amount of waste. Keeping all of this waste together can be a hard thing to do, thus in cities like Chicago, my base of operations, litter and dirtiness are just something you get used to. This grime that accumulates in big cities gives them an unmistakable urban feel which most people can easily recognize, whether they have ever lived in such an environment or not. Kevin Eastman recognizes this aspect of cities and it is reflected in issue 21 of Teenage Mutant Ninja Turtles, which he both wrote and drew. The result is an issue that realigns the series with a new plot while at the same establishing a dark and ominous tone for the future.

Having returned home to New York City from Dimension X, the turtles are back at work refining their ninja skills and patrolling the city. Each of the turtles is commenting on how tense the city feels when they are beset upon by a mysterious fighter. This figure, who is dressed oddly like a prankster god, is master of a seemingly bottomless well of fighting styles, all which the turtles are powerless to resist. He leads the turtles on a chase throughout the city, mocking them the entire time and promising to confront Master Splinter. Eventually this mysterious fighter leads the turtles back to their dojo where he reveals himself to be none other than Splinter himself. It turns out this has all been a training exercise to prepare the turtles for what Splinter predicts is an oncoming storm of violence from their enemies. Meanwhile in Japan, the Shredder, along with Dr. Miller, uncover the preserved body (and spirit?) of Kitsune, the demon who helped give rise to the Foot Clan long ago.

I enjoy this issue quite a bit and I think the main reason for that is the prominent return of Kevin Eastman as artist and writer. While I realize the previous issues of TMNT were written by Eastman as well, there was something about them that just didn’t have the normal flair I appreciate. Maybe it was the goofy Neutrino’s or maybe it was the epic scale of the battle taking place, but in the issues dealing with the war in Dimension X it was easy to forget that this is a TMNT series. While I enjoyed the wrap-up to those events in last month’s issue, overall I wasn’t too fond of that particular story line. So it is with great happiness that I see the turtles return to New York and dealing with what, to me at least, seems like much more Eastman-esque material.

Obviously, part of the reason for this shift in tone is brought on by the change in location. New York City is a far cry from Planet Neutrino what with one being a sleek and colorful future city and the other being dark, dirty, and brooding. Eastman’s artwork in this issue reflects the griminess of a big city so well and it helps set the tone for the entire issue early on. 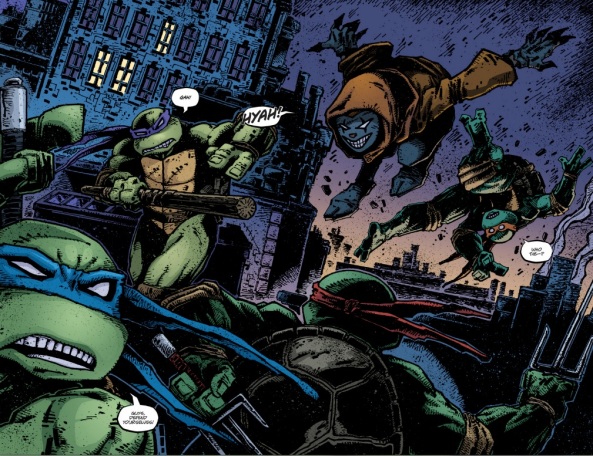 The gritty texture that is characteristic of Eastman’s drawing style is perfect in establishing a shift in direction for the series. From the splatter that pervades every panel (and the gutters), to the heavy outlines, it is clear that this is a different setting than where we last found the turtles. What’s neat about this abrupt change in styles is that it not only signifies a change in location, but also a shift to a darker tone in the title. The turtles are worried about how tense the city is and it would seem rightly so given that at the end of this issue we see that Shredder has found his old pal Kitsune. This will certainly mean trouble for our heroes and when you consider that another player from feudal Japan has entered the fray, it’s almost guaranteed heavy battle will ensue.

Despite all of this set-up, this issue is still mostly action oriented. TMNT somehow has always maintained a high level when it comes to portraying action despite the rotating cast of artists who have lent their talents to the title. I’m not sure how it’s stayed so consistent but I appreciate that the series has crafted fight scenes I always enjoy reading. 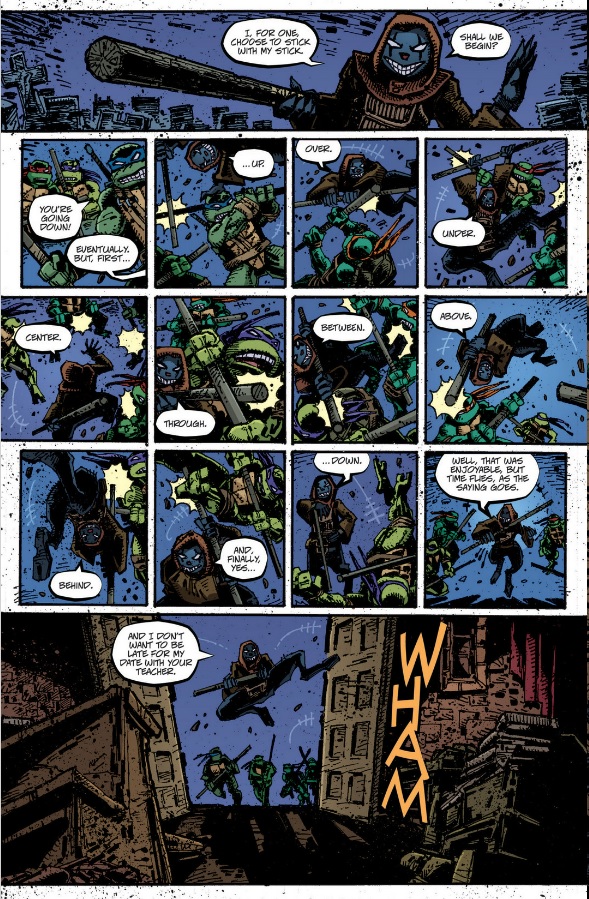 In the panel above Splinter, dressed in disguise, beats up the turtles with a volley of quick attacks, taunting them the entire time. It’s kind of a funny episode in retrospect, like maybe Splinter is tired of having to deal with four teenagers all the time, but on first read it’s quite engaging. You get a really good sense of the quickness of Splinter’s attacks due to the small and numerous panels that depict his actions. Also, you begin to realize how outclassed the turtles are at this point — twelve hits to zero is never good. Further, the page as a whole is visually pleasing, what with the twelve panels making up his attacks being bookended by rectangular panels. Overall it’s just a pleasing page to look at. And really that sums up my feelings about this issue in general — it’s just darn pleasing. I’m glad to see the turtles back in their old haunts and with it the new adventures they will embark on. It’s like coming back to a city that while dirty and dark, is still the place you call home.

Cowabunga Drew! What did you think of this second all Eastman issue of TMNT? Do you like his style as much as I do or do you like the cleaner style of other artists? Also, this issue is pretty cool in that although not a lot of exposition goes on, it held my interest the entire way through. What do you think made that possible? Lastly, is the Foot Clan responsible for the intensity in the city or might it be something else?

Drew: I don’t know if I can really start to guess why the city would suddenly shift towards more violent crime, but Shredder’s absence might have something to do with it. Perhaps the remaining members of the Foot Clan lack the discipline to carry on normally without direct supervision. Or maybe they’ve taken it upon themselves to enact some vigilante justice — Leo remarks that, while violent crime is up, petty crime is down. It could also be some kind of supernatural thing, where maybe there’s a river of ooze running under New York that makes people violent.

Ultimately, I’m less interested in any serialized aspects of this issue — it’s just such an effective one-off. It was hard not to guess Splinter was behind the mask — Eastman was very deliberate in the way he drew Splinter’s legs, and nobody else would know about their layer and relationship to Splinter — but it was still fun to see the boys asses handed to them. This effective, deceptive Splinter is a far cry from the withered sage I grew up with, but it makes for some fascinating possibilities. It also retroactively makes his decision to fight Shredder in Secret History of the Foot Clan 4 seem more plausible. He’s not only capable of fighting, he’s a much more skilled fighter than the Turtles. I’m not sure what that says about the abilities of the Foot Clan, which the turtles regularly rout, but it does earn a whole new world of respect for the old rat.

Taylor, I totally agree with you about the tone of Eastman’s art. The kinetic grittiness of the ink work perfectly matches the sense of unrest that the boys are talking about at the start of the issue. As much as I loved the art, I was surprised at how well it bore Ronda Pattison’s more modern coloring approach. 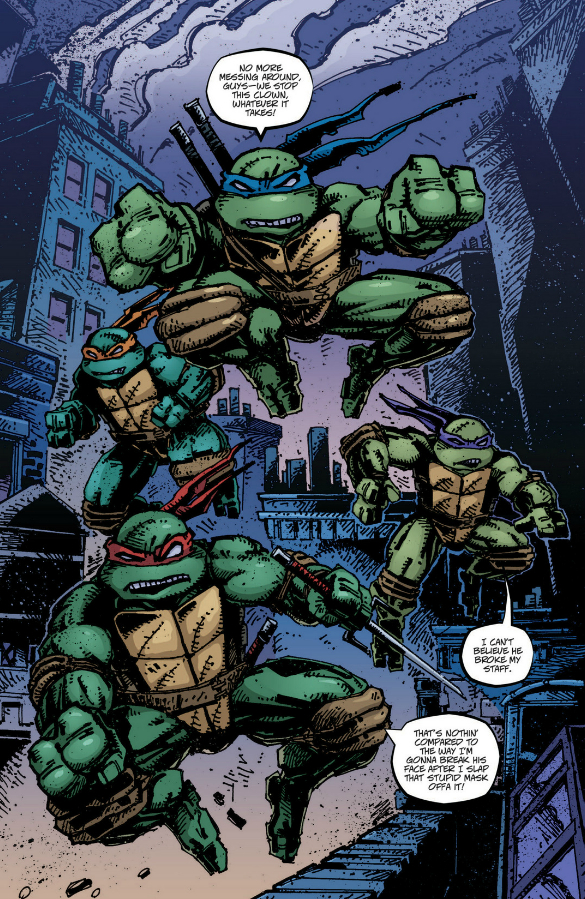 I might have thought that Eastman’s more angular style would require flatter coloring, but Pattison manages to add a great deal of depth without becoming distracting.

Man, I am so pumped for the City Fall arc, but I thought this palate cleanser was appropriate between the sci-fi wonkiness of the Neutrino stuff and what I presume will be the more street-level focus coming up. This series has no problem with fun, but this issue reminds us that we don’t need long, involved arcs to get there — all we really need is ninja action and the turtles being the turtles. This issue was a blast, and I hope we see more fun one-offs from this creative team in the future.