Today, Shelby and Mikyzptlk are discussing The Movement 1, originally released May 1st, 2013.

Shelby: Not only do I work in downtown Chicago, my office happens to be located near the Board of Trade, the Federal Reserve Bank, and a number of other federal buildings. That means I see my fair share of protests; just today, a May Day protest made it’s way past my office to the federal plaza a block away. Being across from the Board of Trade, Reserve Bank, and having my office located in a building primarily filled with bankers means I saw my share of Occupy protesters when that movement was in its heyday. They were on my mind as I read the first issue of Gail Simone’s The Movement; if Occupy protesters were suddenly granted superpowers  and were truly able to turn vigilante, what sort of implications would that have?

Coral City seems like your standard, crappy comic book city. The cops are more crooked than straight, the captain is trying his best, and there’s a horrific murderer on the loose. They call him the Cornea Killer, on account of how he likes to remove his victims’ eyes. Enter Coral City’s new super-powered vigilante team, The Movement! We’ve got Virtue, the team leader, who can “ride people’s emotions.” Not totally sure what that means just yet, but it sounds intriguing. There’s Mouse, a Pied Piper sort of character with the ability to summon and control rats; Tremor, who’s equipped with pretty standard earthquake powers; an as yet unnamed hooded figure, and winged fighter Katharsis, whom you may remember from Knightfall’s team The Disgraced way back in the day in Batgirl. Also, there’s Burden, a mentally challenged boy who believes he’s possessed by the devil and unfortunately has the powers to seemingly back up that claim. 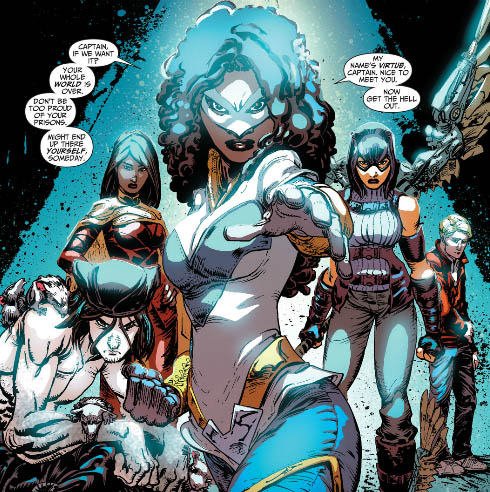 Virtue informs the captain that he’s on their turf; no one’s bothered to help them before, so now they were going to help themselves. He flees the neighborhood when the citizens he was trying to protect don the masks of The Movement and inform him he is no longer welcome. Leave it to Simone to introduce a new setting, story, and characters in a way that provides a ton of information without being merely expository. The crookedness of the cops is perfectly demonstrated by their trying to solicit sexual favors from a minor so she can avoid arrest. Oops, that’s the most terrible thing ever. Even our “good” captain isn’t so great; sure, he immediately suspends the crappy cops despite the union not giving him the authority, but his reaction to The Movement is to apply a bulldozer to the neighborhood. It’s the team itself that really has me thinking. They’re Anonymous and Occupy wrapped up into one neat, super-powered package. It’s easy enough to dismiss the vigilante aspect of superheroes. I get that what Batman does is illegal and dangerous, but it’s not something I think about when I’m reading a Batman title. Even when the GCPD starts to actively denounce the Bat’s actions, I always find myself siding with the god damn Batman; he’s the hero, and he’s in the right, and he won’t kill anyone, and things are better with him around than without, right? Simone cuts through that overly-forgiving fangirl attitude to remind us what vigilantism really means. These people are hard and dangerous, and they’ve been shoved aside and ignored for too long. They have the power to fight back, and they’re going to do so. 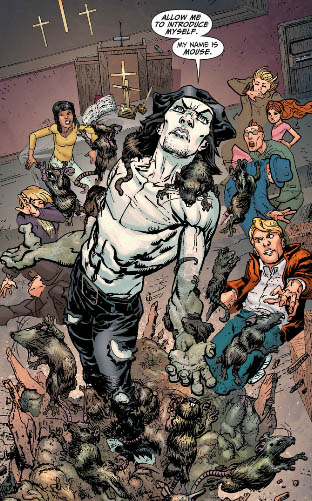 To continue the Batman universe comparison, Gotham City is gritty, but it’s comic book gritty. Batman fights shadowy secret societies and psychopaths in clown makeup; it gets pretty dark, but in such a fictional way. Simone makes The Movement and its members feel so much more real and so much more relevant. These people aren’t robbing banks or just being needlessly evil for the hell of it; they’re fighting for the right to not be sexually assaulted by police officers, to just be safe in their own neighborhood. It’s to both Simone and artist Freddie Williams II’s credit that these characters are already established enough that I didn’t even wonder about where their powers came from. The character design (both visual and otherwise) is smart and cleanly executed. I especially love their costumes, which seem to be composed of repurposed street clothes. Katharsis’ winged rig is pretty specialized, it’s true, but Virtue appears to be wearing jeans and a t-shirt over a long sleeve tee and a fancy belt. Williams’ style is especially suited for this book; his pencils walk the line between cartoony and realistic, which perfectly suits the comic book superheroes against the realistic gritty-city backdrop. I don’t think it’s outrageous to say this is one of the stronger first issues I’ve read in a while; Hawkeye springs to mind as the last issue one I’ve read that I knew was instantly very special. What do you think, Mike? Generally we wait to review a new title until three issues in, do you think there’s enough substance in this issue to warrant jumping right into the discussion?

Mikyzptlk: Well, it’s Gail! You’ve just gotta jump in right? There are a handful of creators out there that, regardless of premise or character, warrant giving them the benefit of the doubt. Gail Simone is definitely one of those creators and it’s obvious that we here at Retcon Punch are big fans of her work. Having said that, I wasn’t exactly 100% onboard with the premise of this series. When this, and its sister series The Green Team, were announced, my immediate reaction was…less than positive. However, the creative teams did strike me as something to keep an eye out for, and just as expected, Simone does not disappoint.

I was blown away by how effectively Ms. Simone set up the series in this one issue alone. In this day and age of writing for the trade and decompressed storytelling, some creators may have chosen to stretch out this introduction as far as they could take it. Thankfully, Ms. Simone jumps right in to deliver something fast paced and compelling. I’m not sure who these characters are or what they can do, but the one thing that is clearly established is what they want: to protect their city. More so, they want to replace the authorities who are established as corrupt and perhaps even useless. 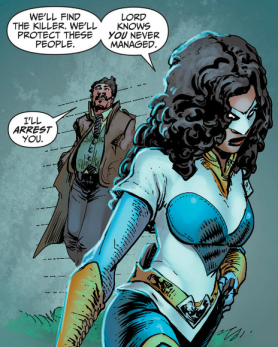 Most of the established superheroes in the DCU are looking to protect their cities and the world from dangerous threats, but rarely do they ever want to actually replace established authority figures. One of the things that’s fascinated me most about this series already is that The Movement has actually deemed certain parts of Coral City as under their protection only. Even Batman, who endlessly claims Gotham as his city, continuously works with the GCPD and is best buds with the commish! Gail Simone has taken the concept of a super-team to a new, interesting, and dangerous level.

How far is The Movement going to take things? Do they have plans on expanding their territory? I can’t help but wonder what the Justice League, with direct ties to the government, would feel about a team of young, superpowered activists positioning themselves against Coral City’s police force. Whatever happens, Simone has definitely convinced me that this is a series worth talking about. Lastly, take a look at how diverse this team is! The team is evenly split between men and women and the leader is not only black, but a woman! How many other super-teams can say that? It makes me want to give Simone a high-five, fist-bump, and hug all at the same time! Although, I should probably do those one at a time. You know, for safety.