Shelby: There are two sides to every story, even stories wherein our favorite, loveable auxiliary character is shot in the head by a new bad guy for seemingly no reason. Even though we’re all still a little sad about the loss of Grills last issue (Matt Fraction included, as indicated on the title page of this month’s issue), we have to remember it was a man who pulled the trigger, a man with his own story to tell.

Kazimierz Kazimierczak (Kazi to his American friends) has had it rough. His family owned a circus in Russia, or a country very similar to it, until it was burned to the ground during the war, leaving him and his younger brother Janek to fend for themselves. The two fell in with the Tracksuit Mafia, Motherland Branch, when Janek was killed in a raid. Kazi lost it, donned the clown paint he grew up with, and started his life as a killer-for-hire. We learn all this in a series of flashbacks while Kazi charmingly chats up Kate, at that “thing” she said she had last issue. After Kate kisses him, denying him his “Joe-Cool Guy exit” he follows her to Clint’s building. Kazi spies on a fight between Kate and Clint, and after Kate storms out and Clint has his heart-to-heart with Grills, we are left with an all too familiar scene.

Once again, we have an issue that focuses on characters that aren’t Clint, and once again Fraction delivers a lot of nuanced character work because of it. Kazi’s story is pretty straight-forward: a man with nothing left to lose turns to the darkside, nothing terribly exciting to report. The real interest is generated by the juxtaposition of Kazi’s terrible story with the charming pseudo-truths he tells to Kate at the party. Both he and Kate aren’t being totally honest as they talk about their work and whether or not they love what they do; knowing as we do that this is the man who kills Grills, and is going to probably going to try to kill everyone in that apartment building, the tension is so thick the scene feels like something out of a horror film. We’re all just waiting for something terrible to happen, for that scary shoe to drop.

When asked where he’s from, Kazi answers, “From Hell,” and I can’t imagine a better artist to tell that story than Francesco Francavilla. We last saw his lurid style way back in Swamp Thing 10; I loved it then and I love it now.

It’s a big departure from David Aja’s clean, graphic style, but Francavilla’s looser pencils and saturated inks serve Kazi’s story well. I’m on the fence when it comes to artist changes; there’s no denying how rewarding it is to read a title with just one artist, like Saga. Drastically different styles can break up the continuity of an arc, especially when we’re talking about multiple artists on one issue. On the other hand, when one talented artist hands pencil duties over to another talented artist whose particular style serves the story, it enhances my reading experience, and that is definitely the case here.

As much as I love/am in love with Clint, I’m so happy to see Kate developed more. She IS Hawkeye, after all; this is her book, too. Her encounter with Kazi is beautifully written. Considering she is a young woman flirting with a mysterious man, one we know to be exceptionally dangerous, it would be very easy to portray her as a victim, or at least a potential victim. But Kate is no victim, she’s the hero of this story, as she tells us very explicitly. She knows what she wants, and she has zero problems doing what she needs to do to get it. It’s that confidence that makes her such a good friend to Clint. She cares for him,  she’s there for him, but she’s not going to take any of his shit. 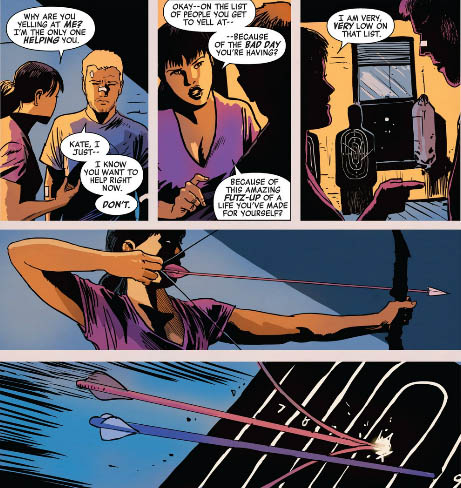 She knows he is a mess, she’s going to be there for him even though it’s really hard sometimes, but she has enough sense of self-worth to not let him dump his issues on her.

I want to talk really briefly about where Clint and Kate’s relationship is going before I turn things over to Ethan. Everyone loves a good will they/won’t they subplot. Spencer mentioned in the comments last issue that Fraction has said there will be no romance between these two. Honestly, I’m satisfied with that; everyone knows The Office wasn’t as good once Jim and Pam got together. It’s that tension that makes the story so delicious. Does that mean I can’t be super happy it’s Kate, not Jessica, that Clint needed relationship advice on? Of course not! I want the two Hawkeyes to continue on in their undefined, very close friendship for as long as humanly possible. With that, how did this issue find you, Ethan? Despite my high praise, I was a little disappointed to not see Clint’s reaction to Grills’ death just yet, do you feel the same?

Ethan: I’m definitely in the camp with you and Fraction – I’m still sad about Grills’ death. But at the same time, I have to say I was thoroughly sidetracked from that during this issue. Oh man, you guys are never going to let me write about Hawkeye again, but… despite all of the reasons to love our dynamic duo of Clint and Kate, I feel like Kazi easily stole the show.

Oddly enough, the first contrast that came to mind was Bruce Wayne, maybe because he’s the poster child for the “they killed my parents!” theme. But where Bruce grew up in essentially post-scarcity circumstances – he was caught by the insanely enviable golden-parachute-meets-comfy-mattress of his parents’ unspeakable wealth – Kazimierz grew up with 3 things: his life with the traveling entertainers, his parents, and his brother. The first time we meet him (chronologically), the first two are ripped away, and the bond with his brother is soon to follow. When you so directly juxtapose Kazi with superheroes as this issue does – no matter how down-to-earth they are – I can’t help but see him as a tragic thought experiment of what happens when you put a person through a trial by fire and then leave them without a shred of self or solace to cling to.

Before we continue, I feel compelled to mention that while Kazimierz is indeed a slavic name, please note that the spelling here is Polish rather than Russian. (No offense! I just get a little irked when people with funny names get chucked into the Russian-bucket!) Regardless of his actual country of origin, the name is an interesting choice, as Kazimierz / Casimir / etc translates to something in the neighborhood of “one who ends the world (assumedly the world of those who stand against him).” For a man who shoots and kills a living symbol of Clint’s integration into the normal world, it’s a rather fitting moniker.

As you mentioned Shelby, the tension between the flashback’s to Kazi’s past and his present skulking is terrific. Seeing his face in the window while Kate & Clint are off in their own little world of being pissed at each other is classic horror-flick fare, and it’s a classic image because of how FREAKY THAT IS. A killer looking into your bubble of safety and warmth through a ridiculously thin layer of glass… as an image, it’s got legs.

So Kazi had a traumatic childhood and does bad things now. While it’s a familiar narrative, I had more trouble understanding it in this presentation than in the usual throwaway explanations of how villains turned villainous, but it opens up some interesting questions. When the two most horrible moment’s in this guys life are steeped in death, how can he survive when carrying out his own acts of murder? When we get to this tableau of one of Kazi’s past hits, I still wasn’t desensitized; he’s walking up to someone, holding a shotgun, looking their terror in the face, and killing them without hesitation. 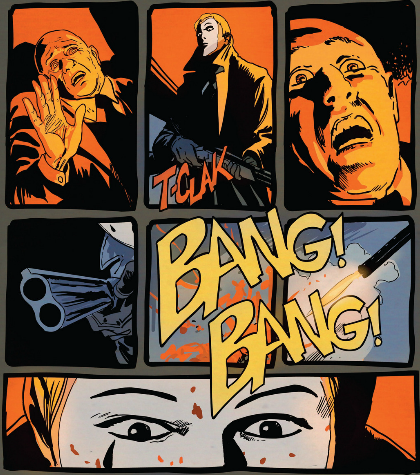 Maybe that’s why he does it – maybe those lightning-bolt moments of pain and fear and blood that took everything away from him have become his new family, his new friend – maybe he can only get back to the days before his loss by staring that panic and horror in the face of those he kills. Or maybe those experiences just broke him inside and took away those things that make us human when they took away everything else. Or maybe he’s just a weak person who turned to the mafia in order to get by after life dealt him a losing hand. I don’t know. Either way, when he says “I feel nothing” after hearing Kate’s love-letter to the city of New York, I think we’re meant to apply that statement to his current, lost existence. But I don’t know if I believe it. I really don’t know what’s going on inside his head for most of this issue, but that’s part of why I like him as a character.

Another  thing – I appreciated the parallel of Kazi’s circus origins, which I read as a nod to Hawkeye’s origin story, learning his legendary archery skills as a side-show (albeit in the Midwest rather than Eastern Europe) in the company of criminals. Again, Kazi is a “what if?” personified, or an anti-Hawkeye. What if the Avengers hadn’t been there to pull Clint out of a life of crime? And in a book about a decidedly “Not-Super” hero, a villain who commits his crimes with the most mundane of weapons fits. Clint doesn’t have radar-sense or telekinesis to guide his arrow to the target; he’s just good at what he does because of his training. Kazi is a hitman who’s survived into his mid-thirties, which speaks to his skill. Both of them are just normal people who are really good at one thing, and also really lucky.

After all of that rambling, I didn’t get the chance to give our protagonists the time they deserve, but let me end with this bit of silliness: Shelby, I too am happy – no, elated – that Clint and Kate are not hooking up. Seriously, stay with me here: Kate was a founding member of the YOUNG Avengers; Clint is a member of the Avengers (note the lack of the word YOUNG in that title). If ever you were going to define two people as not-ok for the snogging, there it is. I love ‘em both, but they make a great pair of friends and I would be sad if they veered off into being a (most definitely star-crossed) pair of lovers. Plus given Clint’s history with significant others, I’d rate him on par with spent nuclear fuel rods when it comes to a good choice for cuddling. Kate, I’m speaking to you as a ficitional person directly now: DON’T DO IT.