Today, Patrick and Mikyzptlk are discussing Green Lantern Corps 20, originally released May 8th, 2013. This issue is part of the Wrath of the First Lantern crossover event. Click here for our First Lantern coverage.

Patrick: It might be pure, dumb circumstance that this issue of Green Lantern Corps came out a full two weeks before this epic run of Green Lantern stories comes to a close. The cover of this issue brashly proclaims that the story within is an “epilogue.” And it is – in the strictest sense, everything that happens in this issue takes place immediately after the crossover has been resolved. Peter Tomasi and Fernando Pasarin’s preemptive coda challenges the very idea that a Green Lantern story could end and explores a deeper truth about what we want, what we need and what we expect from serialized storytelling.

The First Lantern has been defeated, the Guardians are dead. Even though Guy Gardner’s whole reality had been tied up in defeating these threats, he still has unfinished business: that dude Xar — introduced in the zero issue — still has a serious mad-on for Gardner’s family. Guy decides he’s not going to take any chances, so he grabs Saint Walker and zips towards Earth, Walker’s blue ring supercharging his green ring all the while. When he gets to Earth, Guy has more than enough firepower to simply obliterate Xar, rescuing his family in the nick of time. That sounds like a fitting Final Act for Green Lantern Sentinel Guy Gardner, so he decides to give up the ring and lead a normal life with his family in Baltimore. Boredom and restlessness set in after about a week and a half of mundane civilian-life, and Guy lights up his ring and takes to the skies again. Then Tomasi cheekily signs off: 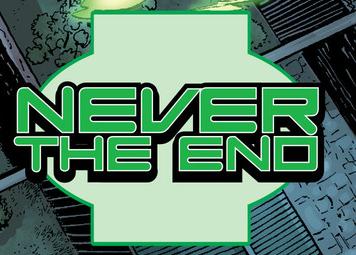 Yes, and why would this be the end? For all the pomp and circumstance surrounding the very public departure of Geoff Johns, Peter Tomasi and the rest from the Green Lantern family of books, there’s no way this was ever going to be the end of the adventures of Guy Gardner, John Stewart or the Green Lantern Corps. We wouldn’t want that – since Green Lantern: Rebirth, these series have been synonymous nearly neverending stories, each epic rolling into the next. Getting the reader excited for what was coming next has often been more important to this series than what actually happened in the issue. Think about it: how frequently did you find yourself saying “I can’t wait to see where this is going?” If you’re anything like me, it was basically every time you put down an issue. What Tomasi’s final issue does so effectively is remind us that we were never in it for the ending.

The issue begins with Salaak in the dark – both literally and figuratively. He has no idea what’s transpired in the final battle. Take a second to notice how the blackness of that opening panel extends all the way into the gutters, but the panels below have clean white gutters.

In that moment, we are Salaak: our perspectives are identical in that neither of us know what’s transpired. Guy and Kilowog offer an explanation of what happened, complete with some incoherent constructs to dramatize the violence. I absolutely adore Guy’s take on the events:

It doesn’t matter how they won, the point is they won. Tomasi is so wonderfully cavalier with the details, to the point where they could be copied and pasted from the “conclusion” of any previous GL event. War of the Green Lanterns? Yup. Blackest Night? Yup. Sinestro Corps War? You bet. Even as far back as Rebirth? Yes, even that far back. You don’t need those details any more – you already know them.

The same goes for Guy’s manhunt for Xar. The solution is obvious – just hit the bad guy really, really hard. The great thing is that Tomasi just lets this non-plan work. There’s no complication and no moment where it seems like Xar may have a leg up on our hero. Guy just nails him with a beam of solid Green Lantern energy, the construct doesn’t even take a creative form – it’s just pure, no-bullshit violence. 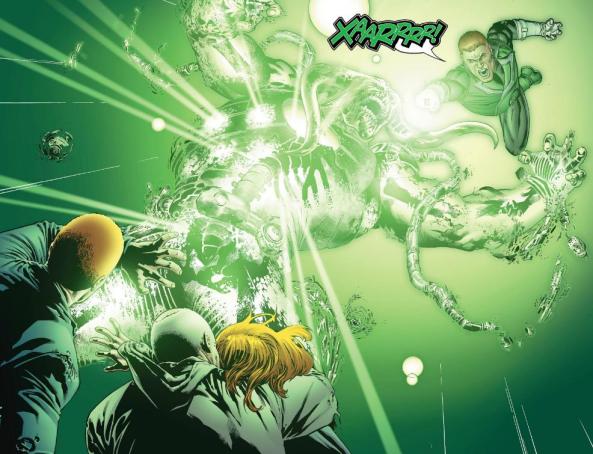 Again, the solution doesn’t really matter. Guy saves the day because OF COURSE HE DOES.

Mike, there’s been a lot of navel-gazing in all of the books in this event, and you and I talked last month about how that issue was a celebration of what’s always been so fun about Green Lantern. This issue is sort of the antecedent to that, gleefully reminding us that we don’t want conclusions in our space operatics. It’s a sly acknowledgement that Johns and Tomasi knew exactly what they were doing all along. So, I ask you: are you excited to see where this is going?

Mikyzptlk: Not only don’t we want conclusions to our space operatics, we don’t want conclusions to any of our beloved superhero properties. For all of the good and some of the bad that that entails, our colorfully-clad heroes are forever destined to fight the good fight until the cows come home…and then leave that home yet again. Since the birth of Superman, the very concept of the superhero is something that was destined to last far longer than any mere reader. By extension, their stories are meant, simply, to continue. Sure, they might get retconned or rebooted, but in the end, we’ll return to their adventures again and again. So, to answer your question: I will always be excited to see where this is going.

Circling back to this specific issue though, Tomasi was able to give his contribution to the Green Lantern mythos a sweet and satisfying conclusion. It’s extremely rare that our favorite ring-slingers ever get the time off they they deserve, so it’s always a treat to see them revel in it. Towards the beginning of the issue, we find John Stewart and Fatality finally getting down to business. By that I mean, well, just take a look for yourself. 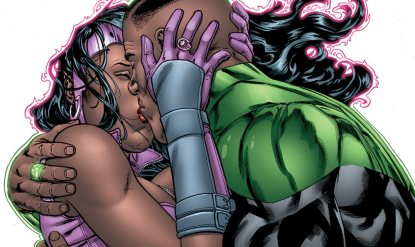 Awwwwwww yeahhhhh. Okay, that’s enough of that. It’s obvious that these two have been headed towards this…conclusion for quite awhile now and I’m glad that Tomasi was finally able to get them there. These two characters have been through A LOT in their lives ever since John accidentally destroyed Xanshi all the way back in 1988 (Cosmic Odyssey). Since then, John has been carrying the guilt of that on his shoulders and it has come to redefine him as a character. This moment feels like Tomasi is telling John that it’s finally okay for him to forgive himself as Fatality —sorry— Yrra, the last remaining piece of Xanshi, embraces him. More than that though, I feel like Tomasi is giving John over to a new writer with a clean slate, giving him the opportunity to take John to the next stage of his life, whatever that may be.

Patrick, you mentioned that Guy saved the day because “of course he does” and you are absolutely spot-on, but what I also liked about that speedy resolution was that it allowed us, or more specifically Guy, to get the resolution with his family that Tomasi wanted to give him. Guy hasn’t exactly had the greatest relationship with his family, but it’s always been clear that they share a great deal of love for one another.  Tomasi introduced a great deal of conflict between Guy and his family and seeing Guy spend some down-time with them was a nice way to close that particular chapter of Guy’s life. Yet again, Tomasi is passing the baton over to the next writer of Guy’s adventures.

In the end, that’s really all the writer of a run as long as this can do, pass the baton. There can never truly be an end to these characters (no matter how many times they die), so with that, Tomasi has been able to bow out quite gracefully as he concludes his contribution to these fan-favorite characters. He’s left a mark on these characters, and their lives, that will not soon be forgotten.