Today, Drew and Scott are discussing the Flash 20, originally released May 22nd, 2013.

Drew: Barry Allen is a man of contradictions. As a police scientist, he is beholden to rigorously examining every scrap of evidence before coming to a conclusion. As a speed-powered superhero, he is all about decisive action. I’ve always found the tension between those two extremes particularly relatable — who among us doesn’t vacillate between those poles? — even when the series itself has been heavier on the action. The scrutiny half of this equation has always come across in the subtext, as writers Francis Manapul and Brian Buccellato have hidden details throughout their runs that reward only the most vigilantly close readings. In The Flash 20, they graduate Barry’s detecting skills from subtext to text, but the results are decidedly mixed.

Fresh off of murdering Albert (one of the crew that was stranded with Iris in the speed force) Reverse Flash kills Marissa (also of that crew). When Barry gets the news, he’s also informed that Gomez (the last of the crew, besides Iris) has gone on the lam. Barry, suspecting that Gomez might be responsible, tracks him down. Gomez escapes, but swears to Barry that he didn’t do it, and that someone else is offing speed-force-powered individuals. Barry collects what evidence he can from Marissa’s body, but reaches a breakthrough when he discovers a that Albert managed to film his own murder. Barry isn’t able to make out the killer, but he does see the Reverse (of his) Flash sign. Which of course, can only point to…Kid Flash?

Okay, I get that Barry is not yet aware of the existence of Reverse Flash, but watching our hero fail to solve a mystery we already know the solution to is incredibly frustrating. It also turns Barry’s prowess as a detective into a laughable exercise in being wrong. The evidence points to…GOMEZ! No…KID FLASH! While all along we know what’s actually going on. The most frustrating thing is that I think this issue would have been really fun if Reverse Flash hadn’t been teased for two issues (and also shown committing both murders). We would have also seen Gomez’s flight as suspicious, and we might have been more willing to go along for the ride on the whole Kid Flash thing. Whoever is targeting these people in particular has some connection to the speed force, which really only leaves Barry, Iris, and Gomez. It’s actually a fun little mystery, but we’re left out of it completely because we were shown the answer ahead of time. 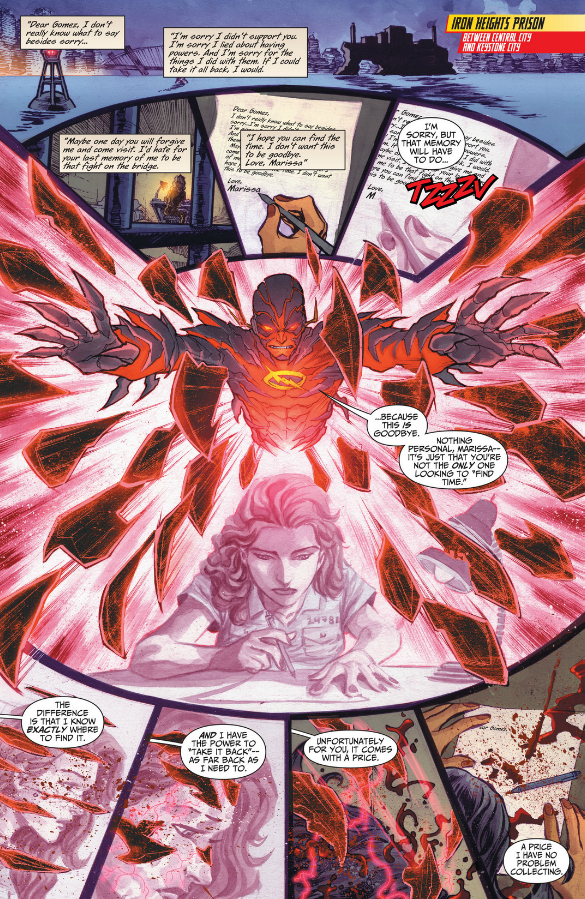 Plenty of crime stories — especially action-focused ones — reveal the villain up front, but the problem here is that we focus so heavily on Barry trying to figure it out. I’m particularly frustrated that the only two clues that yield any actual leads have nothing to do with Barry’s skills as a scientist. He finds Gomez through speed force magic (which I’m only giving a pass, because I suspect that this also means that Iris can tell that Barry has speed force powers), and he discovers the Reverse Flash sign because Albert made a magic speed force video recorder. He falls ass-backwards into both of these discoveries, which unfortunately doesn’t help his image as the detective that can’t figure out the one thing everybody already knows.

There’s plenty to be enjoyed besides the central mystery — I was particularly fond of Barry’s scene with Iris, and it’s always a pleasure when Manapul returns to art duties — but without that spine to hang the rest of the issue on, it all feels a little limp. It left my mind to wander onto those more absurd comics questions like “can the flash run down stairs quickly?”

More disappointing than not liking this issue is failing to come up with a meta-commentary to justify the narrative weirdness. Is it just that it’s a Reverse Flash story, so we start with the mystery’s solution? That would be fine if it worked, but this issue felt far more like it was just putting the pieces in place for this arc. I don’t know, Scott, am I missing something, or did this issue miss the mark for you, too?

Scott: It’s a head scratcher. It’s certainly frustrating to watch Barry fail to catch up to where we readers were at the end of the last issue. Some aspects of this “mystery” remain mysterious- I don’t understand Reverse Flash’s motivation for the killings or why Gomez is acting suspicious- but they’re hardly enough to make up for the fact that everything we really need to know is revealed on the first page.

My biggest complaint with this issue is that it feels so stagnant. Barry’s running in circles, and it’s hard to pinpoint any part of the story that feels like progress. OK, I’m not sure if this will make sense, but it’s hard to see this issue becoming part of the most rewarding path to the end of this arc. I’ll try to explain what I mean — Even if Barry’s meeting with Kid Flash leads him to a useful clue about Reverse Flash, we know he only got there because, like Drew said, he fell ass-backwards into that lead. It’s fine with me if Barry needs a lucky break to crack the case, but if he only gets that chance because of his bad detective work, it’s going to feel especially unearned. And if he doesn’t figure things out quickly, it’s going to stop being frustrating and start to feel kind of pathetic.

Still, I’m not ready to declare this issue a waste. While part of me thinks it could have been boiled down to just a few useful panels, there’s another part of me that thinks a lot of moments could pay off down the road. Like I mentioned above, I don’t yet know what’s up with Gomez. Then there’s the section of the issue devoted to Barry’s father, and the murder case that has nagged at Barry for years. He tells Patty that he’s ready to put it behind him, but in the process he’s essentially turned that box into a bomb that’s going to go off in a future issue. It’s a modified Chekhov’s Gun; “If a murder case is introduced in the first act, it must be solved by the end of the play.”

Drew, I can’t disagree with you, I think Flash 20 missed the mark. Maybe it’s fitting that the issue dealing with Reverse Flash feels like it should have been presented in reverse order, but given that we saw Reverse Flash kill Albert in Flash 19, I don’t think these pages could have been arranged in a way that would have felt like a satisfying revealing of information. It’s a surprising misstep, and I believe Manapul and Buccellato can turn this into something worthwhile. If not, they may have to reverse time and try this one again.