Patrick: This whole arc in Captain America  has been centered on one very bizarre story: Steve Rogers, trapped in Dimension Z, tries to make a life for himself with his adopted son, Ian. This is a comic book, so we didn’t spend much time watching Rogers change diapers or deciding what religion to raise his child or anything like that – most of those development moments were waved away with an issue-opening title card that read “Eleven Years Later,” way back in issue 4.We’re left to imagine that emotional groundwork, and hopefully our imaginations are pretty good, because Steve Rogers’ long odds (which grow longer by the issue) will net a pretty poor payoff if we can’t find a reason to care about Cap’s relationship with this kid.

Last we saw Cap, we had presumed that he murdered Jet Black in cold blood. I mean, he pointed a gun at her head and there was BANG, so… Turns out, that was a cheesy comic book fake-out, and he’s let her live to fight another day because he “(doesn’t) kill the helpless to get what (he) wants — especially the weak-minded.” Leave it to Captain America to zing his opponent while sparing her life. Anyway, the with the threat of an unarmed-and-naked-in-the-shower Jet subdued, Rogers scales Zola Tower to rescue his son. Soon, he’s face to face with Jet, and they square off on a catwalk over the Phrox smelting refinery. Y’see, Zola is preparing his castle and his army to traverse the interdimensional void and invade Earth, and this requires a lot of raw Bio Clay, which I take it the Phrox are basically made of. Cap appeals to Jet’s better angels (or at least, her desire not to feel the physical effects of guilt) and she turns on dime, agreeing to help Steve rescue his son and thwart Zola’s invasion plans. And just in time for a full-page reveal, Rogers takes a bullet through the chest, fired by (you guessed it!) Ian himself.

If I sound a bit flippant about Jet’s change of heart, it’s because I simply don’t believe it. Here’s the extent of Steve’s argument, and her subsequent thought process. 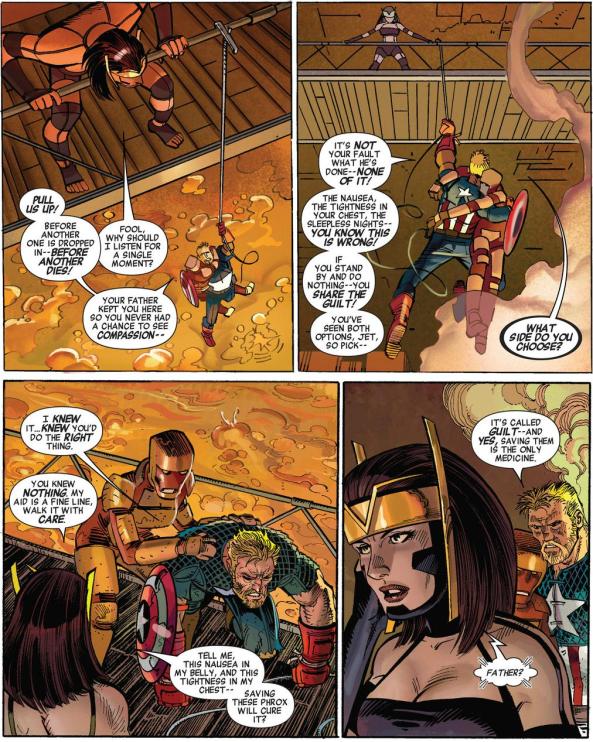 She betrays the only loyalty she’s ever known because the nausea’s too much for her? I know Rick Remender has been building this entire story based on narrative assumptions – chief among them that Cap and Ian have a relationship worth fighting for. That one may ring emotionally hollow (I know it does for me), but this second assumption — that Jet is fundamentally a good person whose never been given an opportunity to do good before — is straight-up bogus.

Basically, I’m tired of this series lying to my face. Cap kills Jet – except he totally didn’t. Jet is evil – except she totally isn’t. Cap’s lungs refuse to take in air – except he totally engages in some wildly aerobic activities. The number of times Rogers assesses his physical condition in this series and declares it impossible to continue, but then continues of his journey anyway, is ridiculous. I count two of them in this issue alone. The first one is so comprehensive that maybe we’re just supposed to believe that Captain America is so far removed from his training that he can no longer self-diagnose his own battle injuries. 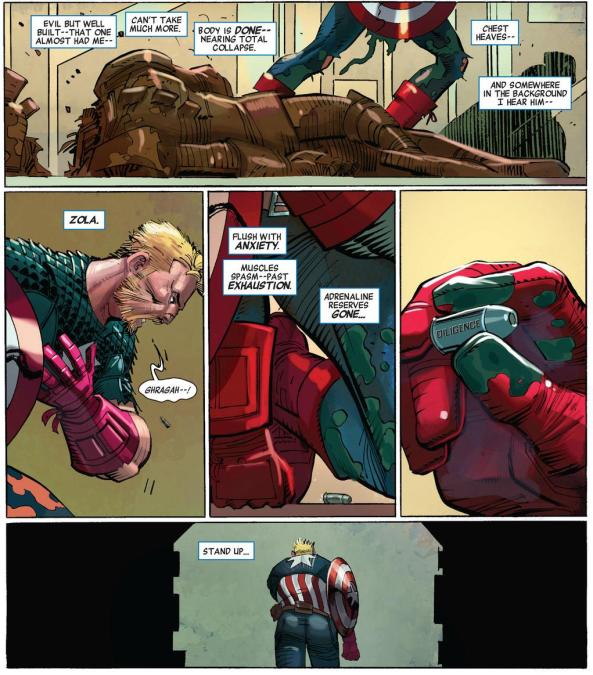 No strength, chest NEARING TOTAL COLLAPSE, no adrenaline… oh, I guess he can just look at some inspiring word carved on a bullet and everything will be okay. Look, I’m all for pushing a hero’s limits, but time and again Remender has more or less explicitly said “we’re way past the limit, but let’s keep going anyway.”

I think the part that frustrates me most about all these gaps in logic and emotional shortcuts is that John Romita, Jr.’s art style has really grown on me. Not only have his jagged edges served to highlight the whole dudes-made-of-clay component of this world, but he’s got a great eye for staging showdowns. This issue, especially, does a great job of pitching  the Cap / Jet catwalk duel as an epic battle, worthy of our baited breath. I’m particularly enamored with the top two panels that span this two-page spread. It’s like wide-screen action on steroids.

Shelby, I know you’ve been digging this arc more than I have, so I have to ask: are you moved by Ian shooting his father? I mean, let’s pretend you didn’t see it coming from the middle of the previous issue – did it have any emotional impact on you? If there’s one thing I liked about the story here, it’s the idea that Cap could win over his opponent by being so damned good. I thought that idea was largely undermined by Jet so obliquely trying to alleviate her physical manifestations of guilt, but we’re so close to a good idea, that I can’t tell if I’m being too grumpy about the whole affair or if the conclusion actually is unearned. I trust you’d weigh in on my grumpiness unprompted, but there it is anyway.

Shelby: Ian shooting his father did have an emotional effect on me, because I believe in their relationship. And I believe in their relationship because I believe in Cap. He is the ultimate good. If there is anyone who can physically and mentally carry on through this ordeal, it’s him. Some of it is built into his powerset; he does have abnormally high endurance and strength. That, combined with his sheer force of will (dude would be a Green Lantern in a heartbeat), sense of duty, and his love for Ian, and I believe he can soldier on.

That is where things are going to get interesting. Steve’s desire to get Ian out of there, to get him to a safe place, is really what’s driving him at this point. He’s physically running on fumes, with his parental drive the only thing pushing him forward, and he’s confronted with a son who seemingly no longer loves him? I don’t know what inner reserves he has left to call upon to get past this. More disturbing to me than the thought that Steve might not get his son back, is the question, “so what was the point?” If Ian stays with Zola, or heaven forbid is killed somehow, would this arc have been nothing more than a way to torture Cap?

You’re right about one thing, Patrick; Jet’s reversal is a tough pill to swallow. Maybe it’s a combination of Cap’s mighty goodness and her weak-mindedness? She has basically been brainwashed her entire life, after all. It’s a stretch of the imagination at best, and wholly nonsensical at worst. But her change of heart is my only big complaint for this issue; I have been enjoying this book immensely. I love the outrageous extremes of this science fiction environment, and I love seeing Cap (himself an outrageous extreme) thrust into that environment. It’s basically a pulp sci fi mag from the 60s, but staring Captain America, and that nonsense is right up my alley. What’s even more exciting is that, as things wrap up, I have no idea how this story will end, or where Remender will take it from here. No matter what happens to Cap and Ian, I haven’t a clue what kind of story this will be after. I do, however, believe I will enjoy it.