Scott: Obsession can be a very dangerous thing. For Superheroes, letting emotions dictate the decisions they make often muddles the line between justice and personal satisfaction. Dick Grayson is obsessed with Tony Zucco, a man he rightly feels deserves punishment for murdering Dick’s parents. But Dick has shown that he will go to any lengths to get to Tony, even if it means compromising many of the things Nightwing stands for. Nightwing 21 finds Dick Grayson venturing further into the realm of moral ambiguity, with implications as fascinating as they are frightening.

Chicago is no safe place for masked vigilantes. Several years after a series of mysterious killings known as “The Masked Murders”, Nightwing finds himself blinded and trapped in a vacuum chamber with an open flame, set to combust if he makes a wrong move, all thanks to Prankster. Dick smothers the flame, busts out of the chamber and has Prankster in his grasp just as the police arrive. Still in need of Prankster’s help, Dick distracts the cops and allows Prankster to flee the scene, but Dick manages to catch up to him soon after. Prankster agrees to help Dick track down Tony Zucco in exchange for Dick’s promise to stop hunting him, and in a matter of hours Prankster deduces that Tony has been working in the Mayor’s office under the name “Billy Lester.” Dick breaks into Lester’s house, where he finds confirmation but not Zucco, who has taken his family out of town to evade Nightwing.

After reading Nightwing 20, I was giddy about Dick’s move to Chicago, a city I know and love. Now, I’m just glad he’s somewhere other than Gotham. As the history of Chicago presented by this Nightwing story diverges from the history of the Chicago I’m familiar with, the identity of the city matters less and less. What matters is that the story takes place in a city that has it’s own past, with mysteries and villains that have not been mined for storylines over and over, and Kyle Higgins has done well to include city-specific details that add intrigue to the story. He could have just had Dick arrive in town, have a couple run-ins with the local police, make a sarcastic remark or two and then find Tony Zucco. Instead, he’s created a backstory using the Masked Murders, which creates an air of mystery and adds a sense of dread to the proceedings any time Dick dons his mask. Plus, I love the concept of Slipshift, the vigilate who can walk through walls, dying when he’s only halfway through a wall.

But the root of this issue has nothing to do with Chicago or the Masked Murders. It’s about the sequence of morally questionable decisions Dick makes in order to get closer to finding Tony Zucco. We knew Dick was entering risky territory when he decided to seek out the help of Prankster, a computer-hacking vigilante whose entire existence seems like one big ethical dilemma. Right after being “pranked”, Dick has a chance to turn Prankster over to the police, but he lets him go for strictly selfish reasons; before Dick can turn Prankster in, he needs trick him into finding Tony Zucco. Prankster probably deserves to be behind bars, but by threatening him and then reneging on a promise let him go, it feels like Dick is breaking some kind of vigilante code. I’m sure Prankster is eager to pay him back.

So Dick only gets his lead on Tony Zucco thanks to crooked dealings with a criminal. To make things worse, he breaks into the Lester home without any definitive evidence that Billy Lester truly is Tony Zucco. Dick has the detective skills to dig up more information about Billy Lester before clumsily breaking into his home, but he’s letting his personal interests get the better of him. I can’t say what Dick’s intentions were, but I doubt he was breaking into the house just to say “hi.” He has a lot of pent up rage, and seeing the photo of Tony Zucco’s happy family doesn’t soften him up.

That’s a look of pure hatred on Dick’s face. Higgins tries hard to make us sympathize with Tony Zucco — Zucco seems to only want a fresh start and security for his wife and son — but none of that sympathy rubs off on Dick. Dick wants only revenge. What he’ll do when he comes face to face with Tony is unclear, but it’s clear that in Dick’s mind, justice for Tony does not include having a family of his own, even if he is a changed man.

This issue left me feeling pretty uncomfortable. I’m worried about Dick’s safety in Chicago and afraid to see what he’s capable of when it comes to getting back at Tony Zucco. To Higgins’ credit, it all makes me eager to read the next issue. What do you think, Spencer, are you enjoying Dick’s trip to Chicago, or would you rather take a vacation from Nightwing altogether?

Spencer: Oh, I am definitely interested in Nightwing’s vacation, although perhaps it’s because I’m probably the only Retcon Punch writer who isn’t familiar with Chicago. Of course, this story isn’t exactly the Ferris Bueller’s Day Off guided tour of the city I’ve always wanted, but hey, it’s the next best thing!

Honestly though, this is the most I’ve been enjoying Nightwing in a while. After the darkness of Death of the Family and Damian’s death, this is exactly the kind of story the book needed to pick things up a little. Nightwing is such an optimistic person, and such a likable character, that after a while it gets difficult to keep watching him endure gut-wrenching tragedy after gut-wrenching tragedy.

Fortunately, despite the grizzly murders and complex morality, this still feels like a much more lighthearted storyline. Much of that is due to the fact that Dick is finally having fun again. 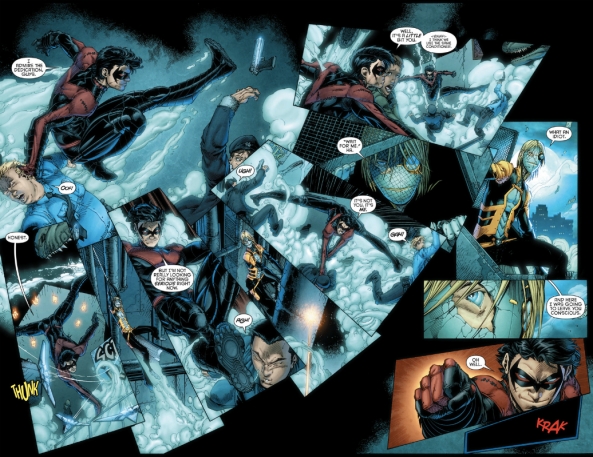 Dick never stops smiling in that entire spread; it’s all flips and quips, and it’s just a relief to see him enjoying himself again.

The Prankster’s deathtrap is a nice touch too. Despite the Prankster’s entire modus operandi seemingly coming straight out of Saw, this particular deathtrap feels closer to something that we would have seen back in the Silver Age, or on the Adam West Batman series. Watching Dick outsmart Prankster and find a way out of the trap is just good clean comic book fun, and it’s refreshing to see such an old trope put to effective use in a modern setting.

Anyway, Scott, I agree with you that the story of “The Mask Murders” really helps add an extra layer to the history of Nightwing’s Chicago. Still, up until this issue I had assumed it was only backstory, just there to give the cops an excuse to relentlessly pursue Nightwing; getting a flashback in this issue, though, makes it seem like a much more pressing matter. Now it’s entirely possible that writer Kyle Higgins could be laying seeds for a future storyline, or that the Mask Murderer could still introduce himself as a new, major player in this current story, but Occam’s Razor compels me to believe that the Murderer is involved with either the Prankster or with Tony Zucco; either way, it greatly changes the morality of how Nightwing is dealing with them, and I can’t wait to see where this plot goes.

Of course, as Scott pointed out, the lines that Dick’s crossing are the real thrust of this issue. His interactions with the Prankster actually form a nice parallel with the back-up story over in Batman 21, where a young Bruce Wayne learns stunt driving from an infamous, wanted man, and once he gets what he wants, knocks out the driver and leaves him for the police. In both cases, it’s nice to see our heroes do the right thing after stooping to questionable tactics, but while we’ll probably never see the stunt driver again, Prankster’s return is imminent. Still, it’s always a little fun to see Nightwing take after his “father”, even if he is emulating some of Bruce’s less commendable traits.

Tony Zucco is where things start to get really complicated, though. I can’t believe I’m saying this, but Higgins is actually making me feel a little bad for Zucco, even if it’s mostly because of his adorable little rugrat.

Zucco appears to have a surprisingly loving and functional family unit going on here, and I feel bad for them, because no matter what happens, they’re going to be the ones to end up hurt, and they don’t deserve it. Still, it will be interesting to see if the presence of Zucco’s family will temper Nightwing’s rage, or just make things worse.

I’m trying to suppress my initial sympathy for Zucco, though. The man did fake his death — presumably while still serving his prison sentence — and back in Issue 18 we saw him shaking down some businessmen for the Mayor. The Prankster even insinuates that the Mayor is a pretty shady dude himself. So even now I don’t think he’s a saint, but there’s still a lot of variables that could change our whole perspective on the situation. No matter how Nightwing chooses to approach Zucco — be it with “forgiveness”, berserker rage, or something in-between — I’m afraid that there won’t be a correct, satisfying answer.

If there’s one thing that bothers me about this Zucco story, it’s that it doesn’t fit into the New 52 Continuity. Excuse me as I go beyond the acceptable limits of nerdery for a moment, but we know Batman’s been around for a little over five years at this point. Assuming Dick became Robin somewhere in the first year, that leaves four years for Zucco to be arrested, fake his death, escape to Chicago, and start a family with a school-aged son. It’s just not possible. Did Zucco already have a secret family in Chicago even when he lived with Sonia’s mother in Gotham, or is this just one of those comic book things we’re supposed to ignore (like Damian’s age, which also contradicts the five year timeline)?

Maybe I shouldn’t worry about the past too much, though. After all, Nightwing himself is a character who always looks forward, moving to the next thing, and by becoming entangled in the demons of his past, he’s at a very real risk of losing himself in revenge. I have no idea where it will lead or what Dick will do next, but I can’t wait to find out.