Patrick: I used to live in an apartment in Uptown Chicago with Taylor and our friend Andrew. This is right out of college and none of us really knew what we were doing in that town – just that we had some friends in the area and where else were we going to find jobs? The later part of that equation proved more taxing that we had originally expected (hooray for economic downturns!), and living there eventually became an endurance match against the city. You’d spend the morning sleeping, the afternoon looking for jobs, the evenings trying to figure out what the fuck you’re doing with your life, and the nights drinking. It’s a vicious little cycle, and every phone call to your folks to ask for a couple bucks so you could cover rent, every email from faraway friends, piled up into this feeling of helplessness – like you were stuck in a make-believe life that bore to similarities to the life you knew before. Oddly, it was getting jobs that we all hated that grounded us – provided structure to our lives. It’s just when Batgirl feels that her old life has totally slipped away from her that regains her structure the old fashioned way: doing her job and punching a villain in the face.

Babs starts the issue by taking Nightwing up on his offer to talk it out. The “it” in that sentence is Batgirl murdering her own brother (or so she believes!). Babs kills the conversation with the always terminal “I don’t know what to say” and the phone call stalls out – totally unresolved. Barbara decides to work to get her mind off her grief, and she’s able to track The Ventriloquist’s license plate to her home in the ‘burbs. There, the magical ventriloquist powers are on full display as Shauna reanimates the corpses of her dead parents and sets them against Batgirl. It freaks her out a bit, but Babs battles the zombie-parents and movies on to confront Ferdie, the murderous — and seemingly sentient — puppet. That battle is actually anticlimactic: one concussive batarang takes out the puppet and one concussive punch takes out the puppeteer.

Batgirl is the first to admit that a one-punch knock-out can be satisfying in it’s own right:

… but it’s sort of telling that nothing in the Ventriloquist’s house posed any kind of physical threat to her. Sure, Ferdie has some kind of magical strength, but Babs is basically always fighting bad guys who are stronger than she is. She’s got gear, smarts and training enough to take them all down, she just has to get over the fact that she’s freaked out by what she’s seeing. Dead family members are a pretty obvious trigger for her at this moment, but even their appearance shakes her for just a moment, and then she’s back on her feet. For as much as Babs doesn’t think she can be a Bat right now, she’s acting an awful lot like one. And that’s because it’s her job, and the best way to push your own baggage out of your head is to just get back to work.

There’s a cute little coda at the end of the issue where Babs is making snicker-doodles and hanging out with her roommate. It’s a scene of quiet domesticity, and it’s interrupted by a date with Ricky Babs had totally forgotten about. It’s interesting to note how this situation doesn’t set her any more at ease than fighting crime: in fact, this moment of quiet affords her the grisly opportunity to think about her brother again. And that’s always a bummer. Plus, the look of panic on her face when she remembers who’s going to be on the other side of that door is priceless. 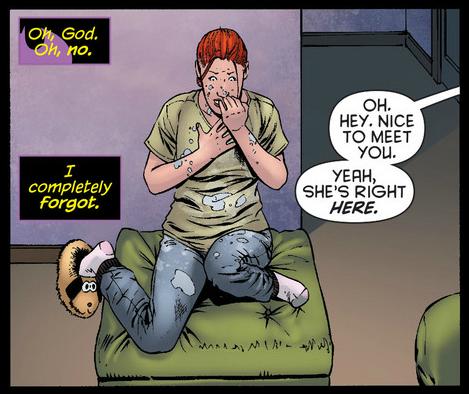 “Oh, God. Oh, no.” Compare that to the language she uses to express the petty frustrations of being attacked by magically-controlled puppets and corpses. She coolly says “I am not enjoying this” when the parents lunge at her, she sighs an “ugh” when she finally subdues them, and (my favorite) she throws out an “Ack.” when she realizes she’s walked into a trap. (“Ack.” Period. I had to double check to make sure, but she’s not even thinking it urgently enough to slap an exclamation point on there.) She is decidedly more put together when she’s Batgirl than when she’s Gordon Barbara Gordon.

And that puts us in a weird position as readers. After the Death of the Family, and then an apparent death in her real family, I want Babs to be able to take a break. And I want that break to be meaningful to her. I don’t know that movies with Alysia or dinner with Ricky will ever be as meaningful as she needs them to be. Dick’s right: she should talk to Bruce. After all, Babs already does know what’s meaningful to her.

So, Shelby, what did you think of this issue? There was a single page insert of a scene between Jim and Barbara Sr. that just sorta reminded us that they were still there and still kinda loved/hated each other. Simone’s got kind of a weird tendency to check in on all of her characters whether she has something to say about them or not. That scene falls squarely into the “not” category. But hey, one crummy page in 20 ain’t bad.

Shelby: I think the page between James and Barbara Sr, served more of a purpose than you might suspect. All her life, Babs has had two father figures; her regular father and her Bat-father. For the first time possibly ever, she can’t turn to either of them. Her conversation with Dick reminded us why she can’t talk to Bruce, and her parents’ conversation reminded us why she can’t talk to Jim. She’s got these major issues, and her usual support system is gone; she is alone and on her own. That sort of loneliness is not easy to conquer; the more lonely you feel, the more you retreat inward and the more alone you become. It’s a sad cycle, which is why I’m glad to see Dick and Alysia reaching out, and to see Ricky show up at the door with flowers. I’d hate to see Babs spiral inward into herself and disappear.

Even though the fight with the Ventriloquist was a little anti-climactic, she was the perfect villain for Babs to face right now. Want to talk about a lonely lifestyle, how about surrounding yourself with inanimate objects and corpses to talk to? Shauna is the extreme example of what happens when that inward spiral is paired with psychopathy, jealousy, and some sort of telekinesis. Babs is dealing with loneliness and isolation by confronting someone who is utterly and totally isolated.

I’m curious to see where Simone is going to take this title. I feel that between the Owls, the Joker, Damian, James, and the weirdness of Simone being fired, Ray Fawkes writing two issues, and Simone’s rehire, it’s been a long time since Babs has been able to just be Babs. I’m looking forward to this title getting some breathing room so our own Gordon, Barbara Gordon can get back on her feet. Simone is busier now, with The Movement and upcoming Red Sonja, but I hope she’ll still be able to find time for the member of the Bat-family we’d most like to eat baked goods with.