Shelby: Story breaks are a tricky thing to manage when you’re dealing with a serialized form of media. In the case of comic books, the writer already has to contend with a month of time passing between story points; I like to think I’m a pretty attentive reader, and there are times I have to go back and skim over last month’s issue to remember what all we’re dealing with. But to interrupt your own on-going story with a mini-story takes a lot of confidence in both your on-going work and your interlude. J.H. Williams III and W. Haden Blackman have that confidence for good reason, as they interrupt out regularly scheduled Batwoman programming for a touching look at Gotham’s scaliest villain.

This is the story of Killer Croc. As he lay dying after smashing apart the city as Medusa’s Hydra, Abbot’s followers take him to their lair where he heals up and shacks up with a snakey gal named Claire. Since Abbot is dead, they declare Croc to be their new leader, on the condition he kill Batwoman to avenge Abbot. He tracks down Maggie, since “…Batwoman’s scent is all over her;” Batwoman shows up, and a fight ensues. Between the two women, things are not going so well for Croc, and he feels himself sliding back into his raw, animalistic ways when a memory of the child he used to be grants him some clarity. If he does manage to kill Batwoman, her allies will hunt him down, and probably hunt down Claire as well. He hustles back to the were-beasts, kills their interim leader for risking everyone else’s lives for revenge, and plans to leave town with his pregnant ladyfriend. 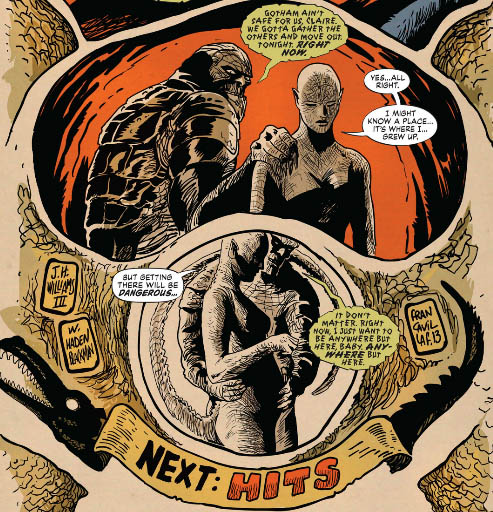 Even though I am dying to know what is going to happen between Kate, Batman, and the D.E.O., I never even thought about it once while reading this issue. Williams and Blackman have given us a beautiful, insightful look at the inner workings of a B-List villain. You all know how much I love to see my super-powered heroes and villains humanized, and that is exactly what Williams and Blackman have done here. Killer Croc has been a lot of things, but “relateably human” has never been one of them. He acknowledges his faults, that he’s not the brightest crayon in the box and that sometimes he loses control and becomes a monster. The prose these guys deliver this issue is outstanding; when describing his newfound clarity, Waylon says that before, “his brain dripped like a slab of raw meat.” Those are powerful words to describe the specific kind of crazy he used to be.

When I was hanging at at my LCS on Wednesday, my friend Bryan and I were talking about how disappointing it is when Williams isn’t doing pencils on this title. It’s not that the other artists are bad, they just aren’t Williams. I think this issue I’ll make an exception to that for guest artist Francesco Francavilla. I’ve adored his lurid, 70’s grindhouse style ever since Swamp Thing 10. As much as I love Williams’ precise lines and beautiful layouts, there is nothing beautiful or precise about Killer Croc. He’s rough and messy and passionate, and that is exactly what Francavilla brings to the table. 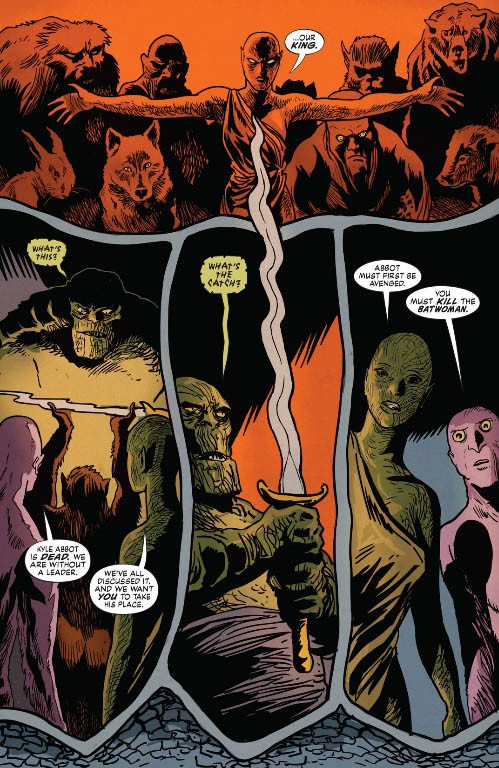 His panels are imperfect and organic, mimicking the shapes of the scales on Waylon’s body. Francavilla’s layouts drive home the fact that this is Waylon’s story, even down to the structure of images on the page.

I think the biggest reason I am so enamored with this issue is the growth Waylon shows. He finds himself thinking more clearly than he has in a long time, and makes reasonable decisions based on that new-found clarity. Jered, one of the other were-beasts, suggests that being Hydra gave Waylon an idea of his true potential, that knowing what he was capable of granted his mind that clarity. But it’s Waylon who really sees to the truth of that idea. Sure, he has the potential to be a nearly indestructible beast, but that still leaves him a beast, a creature whose mind is not his own. He figures out that, if he doesn’t take control of his mind, someone else very well could, and he doesn’t want to live like that anymore. The depth Williams and Blackman have imparted to this character is so impressive and so thoughtful that I honestly don’t care in the least that I have to wait another month to find out what Batwoman plans to do with the D.E.O. With that, I’m going to turn it over to our guest writer Suzanne. What did you think, Suzanne? Were you as charmed as I was with this look at Killer Croc?

Suzanne: So I am not the biggest expert on Killer Croc. In the Arkham Asylum video game, I vaguely remember Croc hunting Batman through the sewers and delivering lines of bland dialogue like “I have your scent!” My interest in the character ended there–at least until I read Batwoman #21.

I tend to get bored by the more physically formidable villains in the Gotham rogues gallery. Characters like Killer Croc and Bane (not counting his portrayal in Secret Six) tend to be more one dimensional and rarely pose a challenge the Bat family’s intellect. My favorites are always the characters that work on multiple levels, like the Joker, Two-Face or even Hush. So I was initially disappointed that J.H. Williams III and Haden Blackman devoted an entire issue to a scaly musclehead like Croc. I imagined myself stifling a yawn as Waylon Jones destroyed whatever buildings are left in Gotham City–maybe even Kate and Maggie’s new pad?

Instead this issue succeeds on multiple levels and is probably one of the best of the series. Like Shelby, I’m impressed by the tremendous growth Killer Croc shows while remaining true to his character and origins. He won’t ever have the smarts of The Riddler or the sympathetic origin like Two-Face. He doesn’t need to. Croc has the self-deprecating awareness of an underdog villain. That element propels the story and adds humor to his narration. The tone is perfect when Croc criticizes himself for baiting Batwoman with: “Time for a rematch, Bat-Bitch!” He knows how campy he sounds but can’t manage to come up with something better. 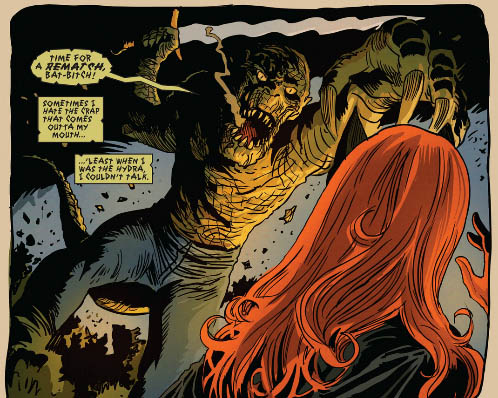 By the end of the issue, Killer Croc realizes that he has to up his game. He’s been played by several major villains in the series and was initially manipulated by the were-beast cult. Now he’s back on Batwoman’s radar and understands more about the bigger picture–specifically how that could affect him and his girlfriend Claire. In his own mind, Killer Croc is still running away from bullies like he did as a child. But this time he is running to protect his family. I like how that changes things for Croc and adds complexity to his decision-making.

I also appreciate how Williams III and Blackman include Batwoman and Maggie Sawyer in a meaningful way. The writing duo play on the common trope of the superhero protecting their loved one from the villain. Man, I love when Maggie busts out the shotgun and yells “Waylon Jones! You’re under arrest.” There will be NO WOMEN IN REFRIGERATORS  in this series, let met tell you. Maggie is a competent police detective and a kickass ally for Batwoman to have by her side.  The scene demonstrates Maggie’s position as an equal to Kate in their relationship, as she deserves to be. This is a character-driven series that develops relationships even in the smallest of appearances.

I’m with Shelby that Francesco Francavilla’s moody artwork fits the tone of this script perfectly. Also, I would kill to see him draw Alice someday. DC needs to make this happen. Like. Right. Now.

Suzanne is an American living in Melbourne, Australia. Her gateway drug to serious comics readership was Gotham Central. If you don’t like that series, then you don’t like kittens, rainbows or ice cream.