Today, Patrick and Mikyzptlk are discussing Birds of Prey 20-21, originally released May 15th and June 19th, 2013.

Patrick: Fun fact: when Family Matters debuted in 1989, Jaleel White had not been cast on the show. Instead of being the adventures of Steve Urkel and the neighbors he loved to annoy, the show was a simple spin-off of Perfect Strangers – the story of a middle class working family in Chicago. But Steve Urkel made his appearance in the twelfth episode and was so well-received that it changed the DNA of the series forever. For better or for worse Steve Urkel had taken over Family Matters, and suddenly he was the only thing mattered. As Birds of Prey struggles to find it’s own audience and its own direction, it receives an Urkel of its own: The Court of Owls.

Aided by the traitor Starling, Mr. Freeze learns the secret of Talon regeneration from the Owl scientists. Then he murders them because… well, come on. It seems like Ev wants to explain her actions, but no one is much in the mood for such explanation so she bails. That’s something the Birds will have to sort out. But in the meantime, Canary has liberated Strix from her icy prison with a Canary Cry, and Batgirl takes her up to the roof to warm up in the sun (teamwork!). Turns out the roof is not the safest place for an errant Talon, as Babs and Strix are attacked by Calvin Rose, a.k.a. Also Talon. Calvin’s a zombie-ninja-assassin, but he’s still a good guy, so he separates Mary from her teammates – thus reducing the potential collateral damage. The two Talons tussle, each showing the other odd moments of mercy. It doesn’t take long for them to realize that neither of them are monsters, and Strix wordlessly proposes that they team up to take out the Court of Owls together.

There’s also a little bit more about Dinah and Condor – he reveals his identity, but curiously he isn’t her long-thought-dead-husband Kurt, but some dude named Ben. Husband or no, they also share a kiss.

But… here’s the thing: Christy Marx’s entire run so far has been overshadowed by The Court of Owls. I really like the Birds characters – about a year ago, I declared Ev as my favorite new character of the New 52 – but between Freeze, Mary and Calvin, this book is quickly becoming about The Court’s infighting in the wake of the failed Night of the Owls. I mean, look at how many layers of programming Mary and Calvin are fighting when they decide to work together. There’s just so much more intrinsically at stake for them than for Black Canary or Condor or Starling. Plus, it helps that Talon has been a more engaging read in the last 10 months than Birds of Prey (to say nothing of how fun the Night of the Owls was). The series feels positively highjacked – thing is: I sort like it.

Also, on a totally shallow, superficial level, I love watching Talons fight. I know we’ve espoused their many inherently awesome qualities a couple of times on this site, but there’s really nothing you can’t have undead-ninjas do to each other. Hell, Mary’s opening move is to throw them both off the roof of the building. And then they keep fighting! Romano Molenaar takes advantage of the deadly acrobatics these characters are capable of, and their brawl is appropriately electric. 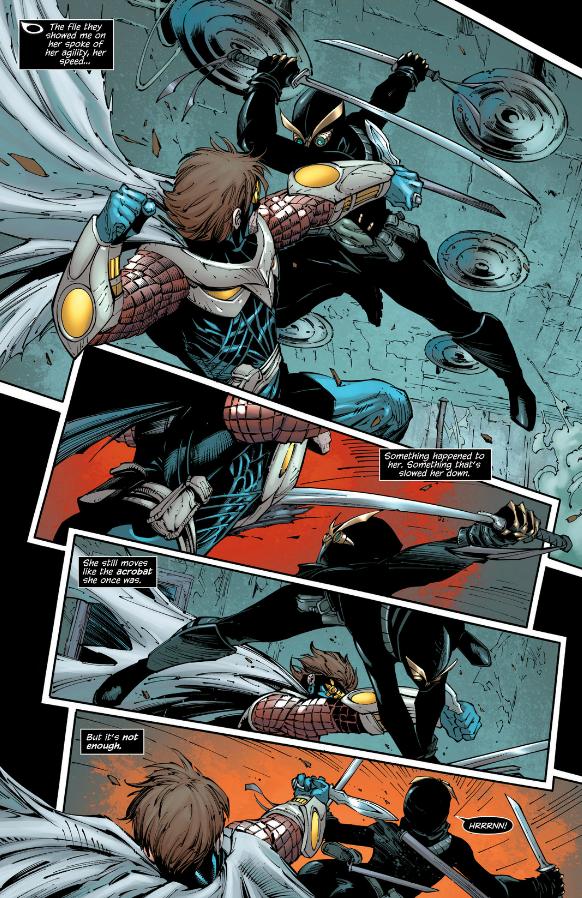 But Molenaar isn’t just flips and slashing swords. There’s a beautiful moment where Calvin gets his first look at Mary’s face through the goggle lens he smashed open. She’s covered in scars — interestingly, not scars caused by the Court — and takes pity on her. The panels’ perspectives pivot around the image of Mary’s one vulnerable, terrified eye. Never mind the fact that they’re zombie-assassins, in this moment, they are human beings with hope and fears.

It’s interesting how quickly Marx adopts Calvin’s voice over as a narrative device. We see it a lot in Talon, but Birds isn’t exactly in the habit of giving that power to its villains. We’ve never seen a Mr. Freeze VO box, for example. I wonder if that means he’s here to stay. Or perhaps Marx just wanted to do right by Talon fans that may have found their way over to this issue by way of Talon 8. Is there anyone like that reading this write-up right now? If so, I’d love to hear a Calvin Rose fan’s reaction to issue 21.

In the meantime, I’ll settle for Mikyzptlk’s reaction to these issues. What do you think – is there life in this series beyond the Court of Owls? What about Ev’s betrayal? She totally knows what she’s doing right? Everyone just needs to give her a second to explain. Also, Strix is coming back to this series, right? She’s not going to disappear into Calvin’s – that sounds crazy.

Mikyzptlk: That’s a good question Patrick. I think that Strix would be an interesting addition to Talon. She’s obviously going through a ton of shit, and who better to help a reformed Talon than another reformed Talon? I could easily see Calvin and Strix help each other out. Calvin can help Strix learn to talk, while Strix helps Calvin deal with his recent zombification. Man, the more I think about this, the more I’m looking forward to the next issue of Talon. Then again, Calvin could easily fit in with Birds or Prey as well. I mean, he’s already got the bird theme going for him, so that’s a plus. Also, since the Birds seem to be fighting the Court all the time lately, it would definitely be beneficial for the team to have a Talon that can actually talk. That’s the thing though, the Birds are fighting the Court a bunch…for now. That’s fine and all since the Court, collectively, makes for a good villain. However, to answer another one of your questions Patrick, the Birds of Prey have been around a lot longer (non-fictionally speaking) than those sinister Strigiformes, so I think this book could easily survive without the Court.

Since we’ve been pretty Talon-heavy in our discussion thus far, let’s switch gears to the other Birds. The most controversial character of the book right now is Starling. Patrick, you certainly aren’t the only fan of the character, and many are a bit perturbed about her recent actions. I can’t really blame them as it certainly was a shock to see her betray the other Birds. I’m not really sure where I stand on this whole thing. I don’t know the character all too well since she’s so new. I mean, she really could be capable of anything. The thing is though, I do find it difficult to see her as a villain now. Patrick, you mentioned that Starling tried to explain her actions and that is certainly the case. The following is just a sample of how many times she actually tried. You may want to click to embiggen.

Like I said, a lot of fans are concerned by her sudden change of allegiance, and while that’s completely understandable, this just doesn’t strike me as how a legitimate villain would react. Starling clearly feels bad about her betrayal, otherwise she wouldn’t be trying to explain herself to the Birds. Nor would she be trying so desperately to get them to join her and Dr. Freeze (What? He is a doctor. It’s only polite.) If she were a straight-up villain at this point, I’d think we’d be seeing way more “Mwa-ha-ha’s” from her, instead of appeals and explanations. My point is, I’m thinking that Christy Marx has a plan for Starling, and that she has a future with the BoP. I’m sure it’ll be a rocky road for the character, but I’m excited to see her traverse it.

So I’m digging this book, though it’s true that the book is a little bit heavy on Talons and the Court right now. As Patrick points out though, this is, kind of strangely, not that bad of a thing. I suppose that speaks to our interest in Court related matters. However, since Talon is probably the most appropriate venue for such things at this point, I’d like to see BoP bring the focus back on Dinah, Batgirl, and Starling. Marx has set herself up with a potentially compelling story with those characters, so I’m hoping we get into that soon. Seriously, what the hell was Starling thinking?