Spencer: A team doesn’t become a team just because a group of characters are assembled together. These characters truly become a team when they can put aside their individual goals, combine their distinct talents and work together as a cohesive unit, and doing so usually takes time and practice. Both of Geoff Johns’ Justice League books this week feature groups that are finally learning to be real teams; the real surprise is that the Justice League-proper isn’t one of those groups.

Instead, Justice League devotes its full space to finishing the first storyline of the Shazam! back-up. With Black Adam demanding the power of Shazam, Billy instead shares it with his foster-siblings (and Tawny the tiger), creating a whole family of Shazams. While they combat the Seven Deadly Sins (who have possessed the rotten Mr. Breyer), Billy defeats Black Adam by tricking him into transforming back to his human state; he immediately ages 3000 years, decomposing on the spot. Over in Justice League of America, meanwhile, the Catwoman who “died” turns out to be the Martian Manhunter; thanks to J’onn, Stargirl, and the ever-tenacious Hawkman, the team destroys the Shaggy Man, captures Ivo, and retrieves an undercover A.R.G.U.S. agent. Since the Society’s leader escaped, though, Waller still considers it a failure, but Trevor manages to convince her to allow the team to stay together. It’s no matter; Waller has plans of her own:

Man, the more of Waller I read, the more she’s coming across like a complete sociopath. Light is one of her own agents, a man dedicated to her and to America, yet she still feels the need to manipulate and threaten him to get what she wants. I don’t think Amanda Waller can function unless she is in complete, puppet-master style control of a situation. Her inclusion here, though, does make me notice a small thread connecting these two books: despite the real villains being larger-than-life monsters (The Society, Black Adam, etc.), both books feature less noticeable, more human antagonists (Amanda Waller and Mr. Breyer) who, despite that status, might just be more rotten than any of the actual villains.

Still, the main similarity between these issues is that they both feature teams finally coming into their own for the first time. At first it felt a little surprising that this group of young Shazams could work together so well right off the bat, but it actually makes a lot of sense; most of these kids have lived together for years, they’ve bonded, and they already work together and watch out for each other as it is. The real surprise here is that Billy Batson, the boy who pushed his foster-siblings away as much as humanly possible, actually cares about them after all.

It’s only by admitting—and embracing—the fact that he cares about his new family that Billy is able to save the day, and more importantly, finally find a place where he belongs. It’s an incredibly sweet ending, and while this issue’s got plenty of action and excitement, it’s this sweet tone that truly sets this story apart from Justice League of America.

We can chalk this tone up to several factors. Billy, Mary, Freddy, Pedro, Darla and Eugene are all lively, funny children who allow us to view this story through their lens of childlike wonder. Gary Frank’s artwork, meanwhile, really brings these kids to life; it’s his wonderfully expressive acting that sells the heartlifting, comedic moments so well.

These kinds of moments are sadly absent over in Justice League of America, which relies solely on action and intrigue to sell the story. Don’t get me wrong, it works—this issue was an exciting whirlwind of a read—but as always, I’d love for this book to really dig into its characters more; they all have so much potential.

Still, for now I’m satisfied to simply watch the JLA finally start acting like a team. None of their actions make their supremely stupid decisions from last month’s issue look any smarter, but at least they’ve managed to compensate for them. I was impressed by Hawkman’s tenacity in the face of sure defeat, I was impressed by Stargirl’s battle strategy to defeat the Shaggy Man, and I was impressed that all these characters came together and implemented the plan without a hitch.

Still, while things may be heating up with the Secret Society, and while our characters are finally asserting themselves as forces to be reckoned with, the real conflict of this series appears to be between Steve Trevor and Amanda Waller. Waller wants a team of brainwashed lapdogs ready to take down the League-proper at any moment, while Trevor just wants to help this team be the best they can be. Trevor sees potential in “the world’s most dangerous heroes”, and for the first time, I think I do too.

(Hey, what’s up with that “world’s most dangerous heroes” tagline anyway? What does that even mean?!)

Comparing these two books in the absence of the Justice League-proper has been a fun exercise, and I’m surprised by how much they had in common despite the Shazam Family and the JLA being such drastically different teams. So how do they stack up? Well, Justice League of America is certainly a huge improvement, especially over last month’s issue, but this first Shazam! arc could easily be the best New 52 story that Geoff Johns has put out, and I’d love to see that kind of heart in more of his books from now on.

So Patrick, there was also a Martian Manhunter back-up I failed to mention entirely. There’s still a few missing pieces to put together, but my gut is telling me that Thoth is the Secret Society’s leader: agree or disagree? Besides that, I look forward to seeing if you noticed any connections between these books that I missed. Compare, contrast, and show your work.

Patrick: You don’t want want to see my work – I doodle and write Smashing Pumpkins lyrics in the margins and there are Cheeto-y finger prints all over it. Honest to God, I used to have to re-copy my work the way I knew my math teacher would want to see it, because I did so much in my head or in goofy orders. I also make assumptions, and then check to see if those assumptions are correct, which doesn’t make for the clearest thought process. It doesn’t always produce the right answer either, but dammit, I knew what I was doing.

It’s neat that we get to compare issues that are both knock-down-drag-out fights. Justice League’s brawl is remarkably more simple than of America’s – I had the hardest time tracking the action in JLA. The battle is just happening on too many different fronts at once, and three panels on a single page will track the three different encounters. It seems like the least efficient way to tell an action story. 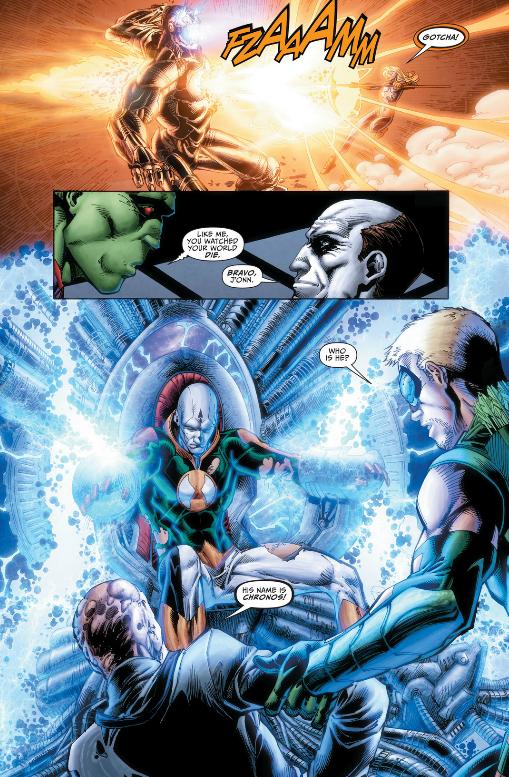 Also, I get a little hung up on the sheer number of characters Johns is injecting into JLA. I’m never quite sure what level of familiarity I’m supposed to have with any of them – like, is it a surprise that Shaggy Man is a robot? And who’s Chronos? And why is that what Dr. Light looks like now. Between re-interpretations, re-inventions and straight-up inventions, I can’t nail down what their fights are supposed to mean.

Conversely, the fight in Shazam! is incredibly clear. I may not be able to track what each member of the Shazam family is up to, but they’re supporting their adopted brother with the superpowers he extends to them. They love him and he loves them – that’s the point of it: it’s emotional support manifesting itself literally as superpowers. There’s no such underlying message behind the teamwork on JLA. The reinvention of Billy Batson’s supporting cast is made all the engaging by the fact that their new relationships are grounded in emotion.

On that subject: my Captain Marvel / Shazam history isn’t great, but I do recognize that Johns is using this mythology the way he always uses any mythology: he’s mining it and expanding it. Mary and Freddie get their names from Mary Batson and Freddie Freeman, old Captain Marvel allies. And Tawny the tiger was some kind of anthropomorphic tiger that fought with Marvel in the 40s and 50s. But there’s more than a little bit of Flashpoint’s S.H.A.Z.A.M., which split the power of Shazam up between six kids (and their tiger). Of course, they they transformed into Shazam (which they called Captain Thunder), they all sorta summoned him together – like Captain Planet. I love that they can all transform into their own version of Shazam, and I just hope that’s a change that sticks in this mythology and isn’t just a one-off thing that Billy won’t ever do again.

It’s also sorta neat that both of these issues find their ultimate resolution in quiet moments, rather than at the end of superpunches. Waller cons Trevor into keeping up with the JLA with some simple reverse psychology and Billy tricks Black Adam into transforming into a 500 year old man by simply talking him into it. I end up complaining an awful lot about how many superhero problems are solved by punching, and it’s a relief to see both of these issues resolved in other ways. I suppose it also helps when the punching looks so good.