Shelby: I’m a total sucker for magic tricks. As a kid, I obsessed over David Copperfield specials; as an adult, I understand it’s all a matter of misdirection and slight of hand, but I still fall for it every time. The magic of expecting one thing, but finding something else never grows stale for me. “Misdirection” is a label that can be applied to both this issue of Talon, and the title as a whole. James Tynion IV has continued to subvert our expectations with this title, making us think we’re reading one kind of story when it turns out to be another entirely. And, just like any slight of hand, the smallest little hiccup can knock the whole illusion askew.

Calvin can’t do it; he can’t pull the trigger on killing Mary. So, Mary helps him out by dressing up a body from Mr. Freeze’s lab in her uniform so Calvin can use the serum and claim he had killed the rogue Talon. The trick works, and the Court sends Calvin to Santa Prisca to take care of that whole villainous army thing. Before he leaves, Calvin says goodbye to Casey in the only way a comic book hero knows how. 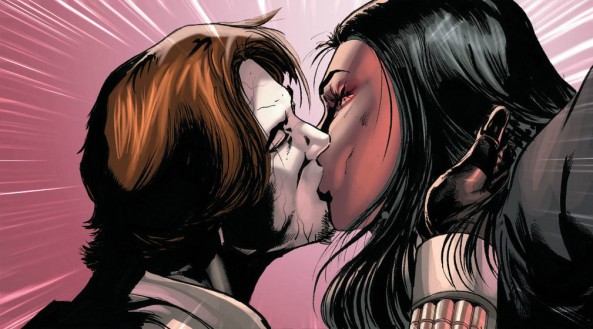 But it’s another trick! He was just slipping her some sort of lockpick, which she uses to great effect. She pulls out a molar, revealing a morse code transmitter, and gets to work getting the band back together. Meanwhile, Calvin parachutes onto the island, where he tracks down Clark, and is about to kill him when one of the monstrous, Venom-fueled experiments named Wolf-Spider is unleashed.

As I’ve said, this issue is all about misdirection. It’s one of the tricks of the escape artist, to make us think we’re watching the action unfold when actually the action has already unfolded elsewhere. As much as I like the idea of a book about misdirection misdirecting us the reader as we try to categorize it, there were a couple little problems that bugged me this issue. Problem one is Mary. Don’t get me wrong, I think she’s a really interesting character, and a great addition to Birds, but if Calvin really wants his plan to work, he’s going to have to do better than a fake body in a suit. Remember, the Court sent Calvin to take care of Mary because she was active with the Birds; aren’t they going to be a little suspicious when they see the person they thought was a steaming, dissolving corpse walking around like it ain’t no thing? It’s a small point, to be sure, but one glaring enough that it pulled me out of the story.

My other beef with this issue was the art. I have been a big fan of Guillem March’s work on this title, and the team of Graham Nolan on pencils and Miguel Sepulveda on inks just is not doing it for me. Or, Nolan on layouts and Sepulveda on finishes, I’m not totally sure how that breaks out. There’s the same sense of dynamic movement between the panels, which I like, but the characters seem to lack character; the slight distortion and exaggeration of March’s style served to add more movement to the panels and more expression to the players themselves. Now, Calvin and crew feel a wooden and somewhat disconnected from the story at hand. 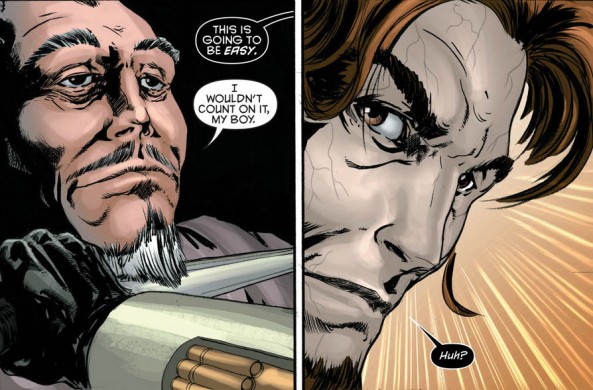 I’m not familiar with Nolan’s style, but I wouldn’t be surprised in the least if part of the problem is him trying to be too much like March, and landing short.

There’s still a lot to admire with this title. I like Calvin’s admission that he just cannot be the creature the Court wants him to be. The fact that he thought that the risk of Sarah and Casey’s lives was enough to make him shed his innate morality speaks to the depths of this character. The Court has taken away his body and much of his humanity, but they can’t alter who he is at his very core. As a character, I have a lot of respect for Calvin. He spent years running away, but now he’s taken this responsibility that’s been forced upon him. Really, the transformation by the Court has freed him to deal with them on his terms. He still has the safety of Casey and Sarah to deal with, but for himself, the Court has taken all they can from him. Once the girls are safe, Calvin will be in a position of “nothing left to lose,” which makes him a huge danger to the Court. What do you think, Spencer? Is a moral man stuck in the body of an undead assassin that big of a threat to the Court, or do you think they’ll be able to break him yet? How about that Wolf-Spider? That’s messed up, huh?

Spencer: Wolf-Spider is indeed messed up! By this point I’m used to characters with freakishly long arms, but what’s really scary about this guy is the fact that he looks like the love child of Vincent Price and Sinestro: 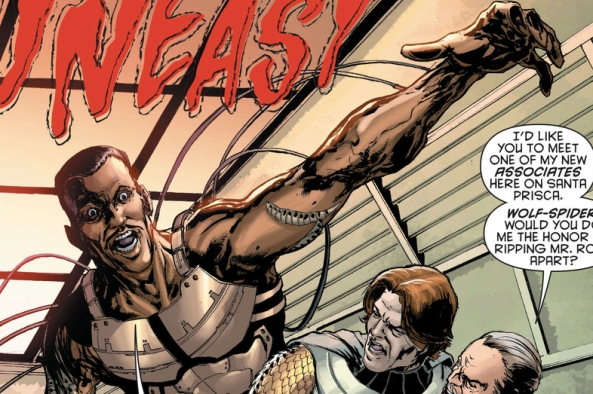 Ick. Still, Brute is far worse: the dude’s a mindless monster kept locked in a cage and fed human flesh! Calvin’s got his work cut out for him, but while we’re on the subject, what is Bane trying to accomplish here with these Venom experiments anyway? Also: why have Clark and Bane teamed up? I can imagine the benefits Clark receives from having Bane in his pocket, but what does Bane get out of it? A favor from the Court once Clark regains control, maybe?

As for your other question, Shelby, I worry about whether Calvin can truly ever gain the upper hand in this war, even as an undead assassin. He’s become nigh-unstoppable in almost any other situation thanks to his resurrection, but the Court still holds the one weapon that can actually kill Calvin, so I don’t know how much of an edge he actually has.

Then there’s the matter of Casey and Sarah. Shelby, you mentioned that Calvin would have nothing to lose “when they are safe”, but as long as the Court is operating, I don’t think the girls will ever be safe. Even if Calvin can free them and hide them (and even if Casey lets him hide her away), he will always have to worry about them being found or harmed. Calvin has lost so much, even his own life, but I get the feeling that those two women are more important to him than anything he has lost thus far. Unfortunately, that means things might not be as different for Calvin as we once thought.

But let’s say Calvin manages to escape with Casey and Sarah: would he continue to fight the Court of Owls at all? Calvin originally only came to Gotham to see if the Court was truly finished, and only got involved in the plot to take down the Court at all because of Clark’s plans and inside information. After all he’s been through, would Calvin keep up the fight on his own? After seeing what a noble soul he truly is, I hope so, but I couldn’t blame Calvin if he just wanted to call it quits and return to a life of hiding.

If there’s one thing that I think will keep Calvin on his righteous crusade, though, it’s Casey. Casey Washington doesn’t seem like a quitter. Honestly, I’ve grown to love Casey more and more with each passing issue, but ever since she’s become a prominent part of the series I’ve had one question on my mind: just what kind of relationship, exactly, do Calvin and Casey have? That’s why I was thrilled to get to this issue’s big kiss. Of course, two panels later this happened: 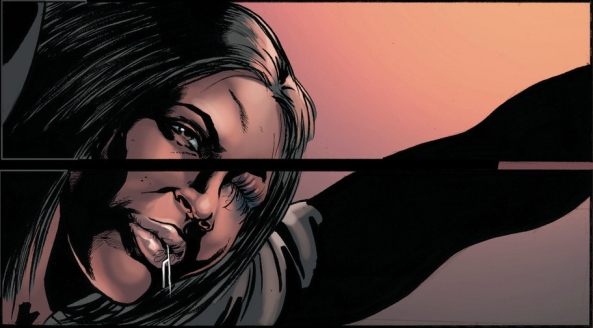 Yup, the whole kiss was a ruse, but I’ll be honest, I was even more thrilled by this. You see, I worried when Casey was first introduced. She could have easily become a Damsel in Distress, or been a love interest and nothing more, but instead she became a character that Calvin trusts to save herself when he can’t do it; she became a character who may be beaten up and trapped, but still smiles because now she has a chance to escape; best of all, she’s become a character as crazy-prepared as any Gotham vigilante. 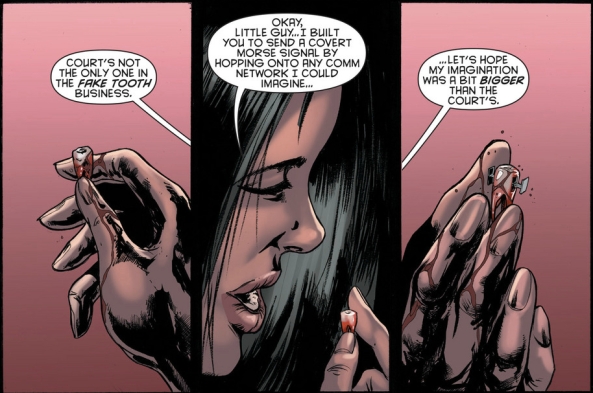 Seriously, how awesome is that? Sure, I’d still love to see any romantic feelings that might linger between these two addressed, but as long as Casey keeps getting to show off how hyper-competent she is I think I’ll be satisfied. Honestly, Calvin may have turned against the Court of Owls in the first place in order to protect Casey, but if he’s ever going to shut them down for good, it’s only going to be with Casey’s help.

Ultimately, though, all this speculation is probably useless. Talon has proven to be a completely unpredictable book, and who knows where the next big twist will take it? Even if its twists didn’t work, Talon’s sheer guts alone would probably have won it my undying affection, but as far as I’m concerned, they have worked, and I can’t wait to see where it goes from here.

(And hopefully we’ll have a better artist to take us there.)