Patrick: Comic books have an unhealthy relationship with death. For superheroes and their enemies and friends and families, death is a temporary setback. It’s such a common assumption that heroes will come back from the dead, and that assumption affects our language as we talk about these characters. Here’s a good example — in the blurb introducing the new Marvel series Superior Foes of Spider-Man, the editor explains the conceit of the series by saying:

…One thing they have in common is their shared hatred for their nemesis, the Superior Spider-Man — even if he’s possessed by their old boss Otto Octavius at the moment.

“At the moment?” Dude, come on, let’s commit to the idea that Peter Parker is dead. Otherwise, he’s not dead — he’s on vacation. So, it’s nice a character so integral to DC’s mythology journey all the way to heaven only to discover that he can’t just pluck the souls of his family from the afterlife.

This issue is like What Dreams May Come, but with 100% less Robin Williams (let’s count that as a win). The Stranger is lead up to heaven by The Voice, hilariously still in the body of an adorable Scotty dog. Y’see, the Stranger’s been kinda skirting his divine duties lately, and the family that he adopted as his own was actually the family of psychopathic serial killer Philip Stark. Stark was supposed to kill his own family, but the Stranger reversed the equation, killing Stark and stepping into the roll of Stark family patriarch. But that’s not the way the universe works, so Stark’s murderous intent came back as a demon-y thing and killed the family (and their babysitter Chris). The Voice offers the following: find your family in heaven and you may bring one (1) soul back to the land of the living. After a walking tour of heaven, Stranger locates his family and realizes that they were all supposed to die, and the soul he’s back to bring back is Chris’ — it the one extra death that resulted from the Stranger’s meddling.

And that’s where we leave the Stranger. He gets back to Earth, miserable and alone, with nothing but his immortality and his connection to the mythology to drive him. Lemme tell you what: this is exactly what I wanted from this character in the first place. Saddling the Stranger with a family fundamentally changed the DNA of the character — there’s a reason it’s a final-page surprise in the zero issue. He’s a character whose greatest loss and greatest regret is behind him. I can’t totally pinpoint why it makes him a more interesting character if he’s a passionless agent of God, but that’s what I want to see. What J.M. DeMatteis has done is added a layer of loss that’s more recent than his two-thousand-year old snitching-on-Christ mistake. He’s a man re-broken, which is actually pretty cool.

It also seems like the series is starting to live us to the weirdness promised by the this character. Fernando Blanco’s dark moody art does a great job of making some of the goofier elements of this issue almost sinister. I absolutely love that I can see that same Scotty dog character in two consecutive panels, and have completely different reactions to him. The first reaction is “d’awwww” and the second? 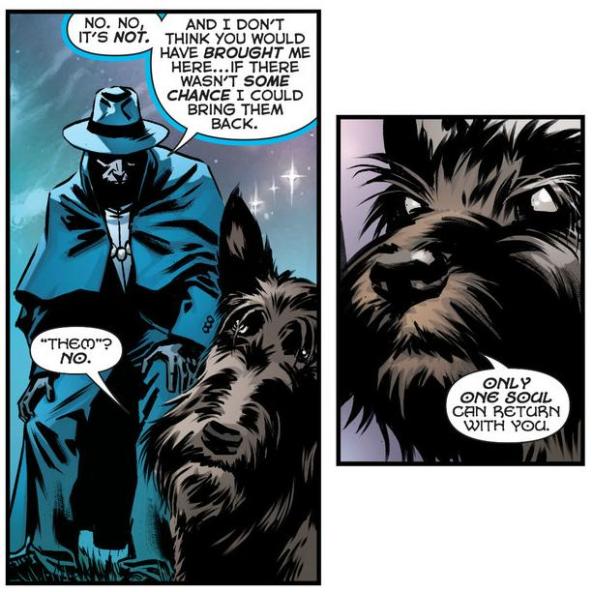 Stranger also gets an Angelic guide in heaven — Zauriel. This character has a weird history in the DCU. He was invented by Grant Morrison because he wanted to use Hawkman, but was told he couldn’t — so he made up someone who was sorta Hawkman-ish, only, y’know, an Angel. Anyway, he’s back. But rather than giving him the Hawkmanesque armor he donned as a superhero, Blanco strips him down to a long white skirt and covers his body with glowing runes. The result is pretty cool. 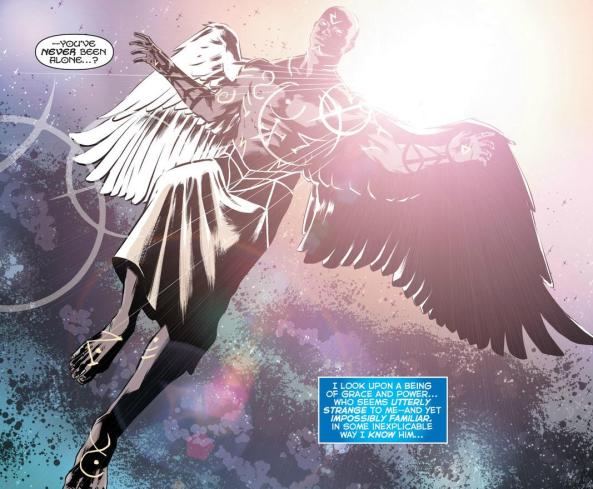 There are a bunch of other heavenly vistas rendered in a smokey digital-painterly style. Blanco and colorist Brad Anderson deliver an awful lot of soft glowing beauty throughout, but they dull the colors and darken the skies as the Stranger’s reunion with his family moves from sweet to bitter. Even if I’ve had a bit of a hard time caring about the Stranger’s journey to save his family as they lived, I can at least connect with his emotional journey as he says good-bye.

Taylor! If I recall correctly, Phantom Stranger was the first comic book you ever rage-quit. Does this issue do anything to move you past that rage? Also, I didn’t mention the one-page scene between Doctor Thirteen and The Question. It was clearly more Trinity War set-up stuff — which, I can understand because it’s a comic book and crossovers are good for business and blah blah blah. Seems like it should have been an epilogue, right? Like why insert that information into the middle of the Stark family reunion?

Taylor: After a lengthy hiatus from reading the Phantom Stranger I have returned to its pages with the promise that it has been much improved. Patrick, you’re the one who vouched for its improvement so it only seems right that you should be the one who asks me if this issue has turned me back on to this intriguing title. What has always been promising about Phantom Stranger is its ability to draw on Christian mythology to create a dynamic world where Heaven and Hell are in constant battle with each other. The first few issues of the relaunch of Stranger found us not exploring this enticing idea but instead the Stranger’s relationship with his family in maddening Hallmark tinged chiaroscuro. This wasn’t what I was looking for in the title and logically it flung me into a rage over how stupid and trite the whole thing felt.

But this issue of the Stranger has done much to reverse my opinion of the title. The rage this title invoked in me was so great that this issue is the first I’ve read in about half a year. With that being said, I’m not totally up to speed on all that has happened in the Stranger’s life but it seems like it is progressing in the way I had hoped. Patrick, you mentioned how you like the Stranger best when he is solely an avenging agent of God, devoid of love and hellbent (ha!) on divine retribution. I think I agree with you on this and that goes a long ways towards satiating my rage towards this title. Previously, I expressed my anger over how much the Phantom Stranger dwelled on showing us how happy the Stranger was with his new family. Soccer on Sunday mornings, kisses and hugs before bed, and promises of love seemed to dominate the plot. But now those are taken away and with it a lot of the problems that pervaded this title.

What’s kind of funny about this is that the Stranger himself doesn’t seem ready to let go of these things. While the authors are trying to move the focus of the plot beyond the Stranger’s family he is actively resisting it.

In a fit of rage (not unlike my own) the Stranger denounces God and says he will be taking all three members back to the living world even though he has only been permitted to take one. This is essentially the crisis point between what this series has been so far and what it promises to be. That is to say, here the Stranger is finally beginning to accept that his family will no longer be involved in his life and, thankfully, in this title. Also, it will be interesting to see if the Stranger, now devoid of family, will learn his place in the hierarchy of divine beings. Clearly, he thinks he can still defy God in the above panel, but we all know that that’s impossible.  But does he realize  this? Will he ever? Could this create future plot points? What’s this? The Phantom Stranger has suddenly become interesting! My rage is dying as we speak!

Patrick, you spoke highly of the art in this issue and I couldn’t agree more with what you had to say. The Heaven depicted by Blanco is somehow exactly how I expect it to look but also fresh looking. In particular I enjoyed the full page spread where we see that Heaven isn’t solely a Christian invention.

The idea that all religions basically are an expression of the same idea is intriguing and gives some depth to the mythical world the Stranger inhabits. In the future could we see the Stranger going toe to toe with Shiva in India or running along with fox demons in Japan? Limiting the Stranger to a strictly Christian mythology would be alienating to a lot of readers so it’s nice to see other religions getting a nod in this issue. Also, it’s hilarious how underwhelmed the Stranger is by heaven. Clearly, Dante he is not.

And that little aside with Thirteen was a little odd and out of place, all the more so because it was but a single page. I had entertained the thought of Thirteen killing himself and then the Stranger taking him back to the world of the living but that didn’t pan out, so it’s placement confuses me as well. Maybe the editors wanted to break up the family love-fest between the Stranger and company?