Spencer: I’m probably in the minority among the Retcon Punch writers, but I’m actually a huge fan of Catwoman. When written properly she’s an unpredictable, fun character, but I’m particularly fond of her team-ups with Batman. Catwoman’s been a lot of things to Batman in the past: a villain, a temptation, an ally, and even a love interest, and each version brings out a new aspect of Batman’s personality. When you throw these two characters together you can never be quite sure how they’ll react, and their team-up in Batman and Catwoman 22 doesn’t disappoint; Selina even manages to make Batman smile.

Bruce awakens (at 11AM, the lazybones) to find Carrie Kelley filming him. She’s there taking care of Titus, and she takes the opportunity to harass Bruce about Damian’s whereabouts. He promises to have Damian call her, but his attempt to splice together recordings of Damian is interrupted by the…Cat-Signal? Catwoman has summoned Batman for help with a JLA mission to rescue a captured spy. The two fight their way through the Chinese Embassy to find that their “spy” is actually a young child being used as a bargaining chip against her deserter father. The two rescue her, and Batman happily treats the child to the ride of her life. He also keeps his promise to Carrie and fakes her a call from Damian.

This team-up was immensely satisfying to me, easily the best in this storyline. Part of what makes it work so well is that Selina brings less baggage than the other members of Bruce’s family; thanks to the events of Death of the Family Bruce’s interactions with his former sidekicks are already strained, plus they’re a constant reminder of Damian’s death. Catwoman, meanwhile, simply wants Batman to accompany her on a fun little mission; it’s possible that Selina could’ve even pulled the mission off on her own, and just enjoys Batman’s company. Regardless, it puts Batman in a better mood from the very start, and the banter between the two is a lot of fun.

But what’s with all this talk of fun? Bruce is still grieving over the loss of his son; this storyline has been all about the five stages of grief; the title of this issue is even “Despair.” Why in the world is this team-up fun? Well, as far as I can figure, it’s because this issue isn’t about watching Bruce reaching the depths of despair; it’s about him finding a way out.

Despair is defined as hopelessness, or something that makes one give up hope. Despair is an interesting emotion to tie into Batman because, as far as I’m concerned, giving up on hope just isn’t something Batman does. Batman’s the guy who, as a newly orphaned eight-year-old, channeled his grief into a lifetime of crusading. Hopelessness, inaction, they just aren’t in Batman’s vocabulary, at least not long-term.

Of course, if anything could make Batman despair it’s the loss of his son, and we even see Bruce succumb to it briefly when he’s forced to pull up recordings of Damian to appease Carrie Kelley. 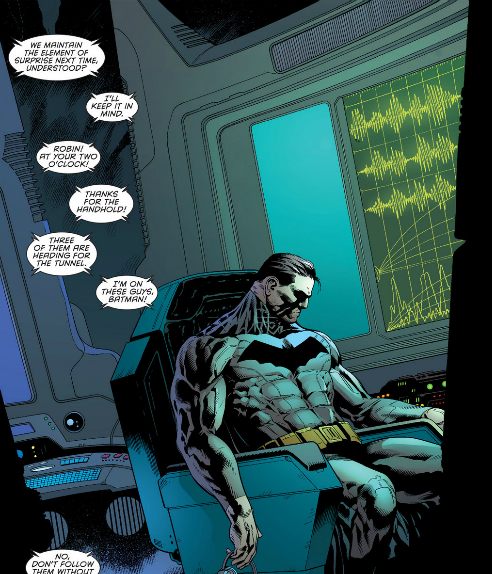 It doesn’t last long. Catwoman summons Batman into action, giving him a mission to take his mind off things. More importantly, though, she shows him a new side of herself:

He sees new potential in Catwoman, and it gives him reason to hope. More importantly, though, the mission reminds Bruce of why he fights at all. Simply put, there are people out there who need Batman. When Bruce sees that young girl, Jai-Li, held hostage, it’s easy to see him envisioning Damian, envisioning her father losing his child. It’s also likely that Bruce could envision himself as that little girl, about to lose her parents to fearsome criminals.

Bruce lost his parents, and now he’s lost his son as well, but he can certainly make sure that no one else has to endure that same loss. So he gives it his all to rescue that girl, and as he swings across the skyline with her, literally making her dreams come true, his smile feels incredibly earned. 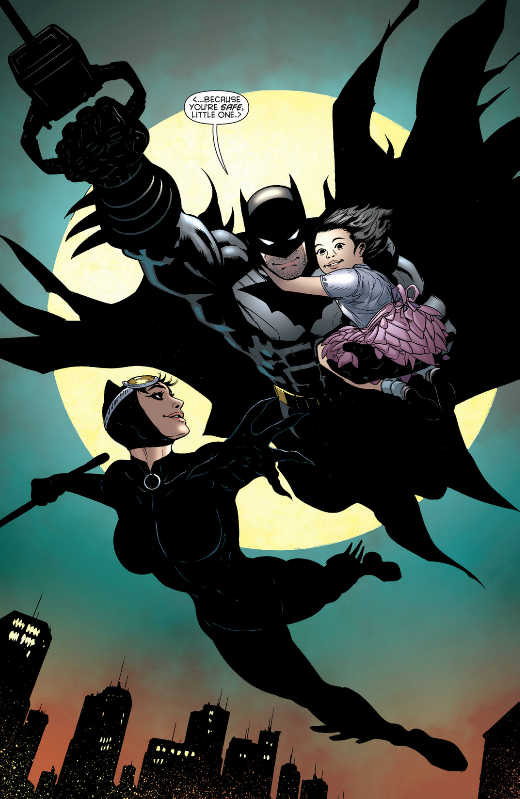 But what about Carrie Kelley? There’s been a lot of speculation about her becoming the next Robin, but I’m not really interested in rehashing that (For the record, I like Carrie, but if we’re getting another Robin, I’d rather it be Harper. Carrie doesn’t seem to actually want the job yet). Instead, I want to talk about how Carrie affects Bruce, because while Catwoman and her mission helped bring him out of a funk, Carrie’s presence is partially to blame for it in the first place.

In the future, once Bruce has had more time to grieve, I can imagine Carrie’s presence being a comfort to him. Carrie obviously loves Damian and knew him well, even without knowing he was Robin, and those are memories she could share with Bruce someday. For now, though, Carrie seems to represent a side of Damian that Bruce never got to know. Her mere presence is too much of a reminder of Damian for him to take, and her persistence makes it all the worse. Unfortunately, Bruce and his lies are largely to blame for that pesky persistence.

I realize that Damian and Robin both dying simultaneously is complicated, but Bruce is only making things worse for everyone by lying about Damian’s death. Not only is he prolonging his own grief, but he’s also leading Carrie along and robbing her of her own opportunity to grieve. Bruce has built his lies into a fragile little house of cards, and it’s only a matter of time before it collapses.

The last few issues of this title fell a little short for us, but this feels like a wonderful return to form. Mik, do you agree? What are your thoughts on Catwoman and Carrie and how they affect Bruce? And hey, what’s up with that helmet Bruce gifts Selina? I’ve got no idea what that’s about.

Mikyzptlk: I wish I could tell you what that gift was all about, but I have no idea either. I would imagine that it involves something that went down in Catwoman, but Gog knows I don’t go anywhere near that book with Nocenti at the helm. Tomasi always does a good job of incorporating events from other books into his own, making his book always feel like a part of the greater DCU, as opposed to how some other DC books feel much more isolated. So while I don’t personally know what Batman did to Catwoman’s previous helmet, I assume that it’s meant to strengthen the positive aspects of their relationship. Plus, I’m sure that readers of Catwoman appreciate the reference, so good for them.

I like your read on the unpredictability of how Catwoman will affect Batman. In a lot of ways, Catwoman acts as the Red Kryptonite for our beloved Caped Crusader, you never know how Batman will react to Catwoman’s presence. That aside, I think it’s understood that Catwoman has a “Get Out of Jail Free Card” with Batman mainly because she is a super-criminal and not a super-villain, which is  unlike most, if not all, of Batman’s other rogues. No matter how big the take, she doesn’t like putting people in danger, and she’s certainly not the hostage-taking type. Batman recognizes her sense of honor, but obviously has issues with Selina’s criminal lifestyle. Since I’ve mostly skipped her solo series, most of my experience with Catwoman in the New 52 comes from Justice League of America. Since that series is relatively young, that means that I haven’t had all that much experience with Catwoman in the New 52. I think that Tomasi does a great job of encapsulating the character of Catwoman, and it’s an absolute treat.

I was struggling to find how “Despair” entered into this issue, but I like your take on it Spencer. I think that out of all of the stages Batman is currently going through, despair is an undercurrent through all of them. So, while we only catch a brief glimpse of Batman clearly in despair, I feel that Catwoman helped to be the distraction that Batman needed in the moment of despair we found him in. Seeing Catwoman actually doing something good, and helping her rescue a young child, really did help to put a smile on Batman’s face, and it was definitely the most rewarding part of this issue.

I also agree with your take on Carrie Kelley in this issue Spencer. Since the majority of Batman’s allies know the true fate of Damian, they aren’t forcing Bruce into a fiction where Damian is still alive. It certainly isn’t healthy for Bruce to have to live this lie, and Carrie’s continued presence is definitely complicated Bruce’s grieving process. I mean, who else has to pretend that a loved one isn’t actually dead? Besides, murderers that is. Or Bernie. Honestly, I find this whole aspect of the story to be incredibly creepy. I understand that Bruce needs to hide Damian’s death to avoid any Bat-comparison’s that the truth would bring to light, but it’s still creepy. It doesn’t help that Bruce needs to splice together audio clips to leave a message for Carrie, nor that he’s now going to be taking Damian’s place in cyberspace. Creeper: Level Batman.

I hope that Bruce comes clean to Carrie sooner rather than later. Of course, that might also mean revealing who Bruce really is, which may be opening up a can of worms with a big ol “R” stamped on the front of it. There’s no telling where that aspect of the story will go next, but I do hope that Bruce will able to reveal the truth of Damian’s passing soon. Because, again, it’s just…creepy.