Mikyzptlk: As you know, all of the GL books have recently begun new directions with new creators. Kyle Rayner’s new direction involves babysitting the “New Guardians” and he’s recently run into some trouble. Sure, there’s Relic, but while I’m enjoying much of this book, the real trouble that Kyle has run into is that his book has been hijacked (again) by the main events of another book.

Relic has been released and everyone is flippin’ out. He starts to get up to some shenanigans as he sends some probes out into what seems like all of creation, and simultaneously begins to transform the surrounding spaceships into…something. Whatever he’s up to, it’s killing those inside the ships, something that Kyle aims to put a stop to. Kyle zips into one of the ships and in an “I immediately regret this” kind of moment, he finds that the ship has easily captured him. Carol Ferris is called in for backup and helps Kyle to escape. Unfortunately, the escape occurs only after Kyle has unwittingly revealed everything he knows about Lantern technology to Relic. 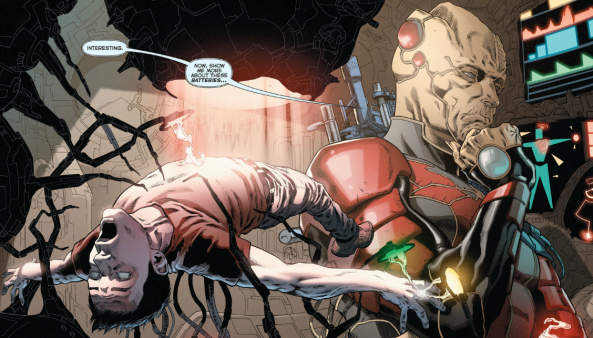 Ever since Justin Jordan hit the mean streets of the DCU, I’ve been a detractor. His work on Team 7 never grabbed me as it all just seemed to be violence without substance. I was convinced that his interpretation of Kyle would be an uncharacteristically angry guy who ring-slinged first and asked questions later, but I’m happy to say that isn’t the case. It’s hard to put into words, but Jordan’s Kyle still feels like the Kyle I’ve always known and loved. Jordan has started to give Kyle some familiar character flourishes that are more than welcome: 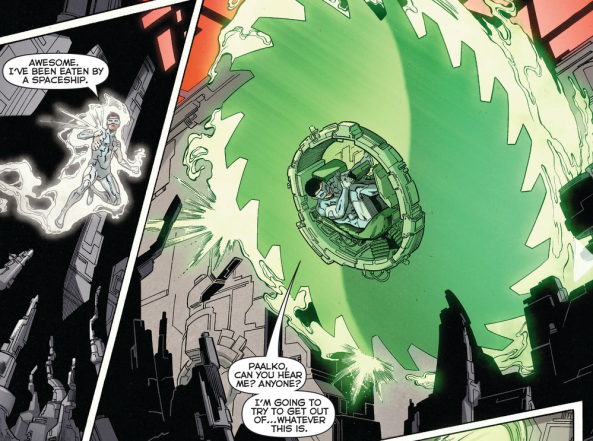 Just look at that construct! That’s a Kyle Rayner original folks. It’s safe to say that I’ve been enjoying character flourishes like these (his dialogue here also rings true to me), and I’m much more comfortable with the idea of Jordan taking the helm of this series. Another character I’m enjoying under the pen of Jordan is Carol. While I think he’s doing her character justice, I’m also enjoying where he seems to be going with her and Kyle. Over on Green Lantern, Robert Venditti has established that if Carol wishes to maintain her status as a Star Sapphire, she must continue to love Hal Jordan, even if the guy is mostly a jerk who never has time for her. That hasn’t sat right with me since it’s been established. At the same time though, Carol and Kyle have developed a bond throughout the course of this series that Jordan seems intent on developing further:

I’m excited for this; I think that their relationship is going to play into what Venditti has established with the nature of Carol’s power. Now, the obvious route to take would be to have Carol and Kyle realize that they love each other. That way Carol could keep her powers without having to be trapped in some kind of long distance not-quite-relationship with Hal. Of course, that still wouldn’t solve the the problem of  Carol having to love anyone to keep her powers. Basically, what it says to me is that if Carol has to love Hal to keep her powers, then her power lies in the love of a man. In other words, she has power because of a man. It strikes me as extraordinarily sexist and it’s got to go.

I’m beginning to think that Venditti set this particular domino up for Jordan to knock right back down again; it would be easy to just have Kyle and Carol fall in love, but the “connection” they share doesn’t necessarily have to be a romantic one. I’ve got my fingers crossed that the revelation will be that Carol will discover she has a platonic love for Kyle and that what sustains her power isn’t the romantic love she has for a man, but the fact that she has the capacity for love of all kinds. I know it may sound corny as hell, but damn it, I like it better than the alternative.

Now, let’s talk about Relic for a second. Jordan is painting an interesting picture for the guy here. It’s clear that he is bad news, but I find his approach to be quite interesting with all the research he seems to be doing. Take a look:

What is a Lightsmith? Are they truly responsible for destroying the “old universe?” What does he mean by a “second chance?” These are all questions I’m generally interested in learning the answers to. The only problem is that I’m assuming we aren’t going to find that out in this book. At the end of this issue, Relic is seen moving on to an unknown destination and I’m guessing that that destination is  Green Lantern. Even with the new creators on board, it’s still apparent that the GL books are still beholden to the overall storyline taking place in Green Lantern. While I’m enjoying much of what I’m getting out of the GL family of books, it’s frustrating to see creators chained to what’s happening in another book. It makes sense for certain events to be related, but to force one book to essentially act as a prologue to another just doesn’t seem fair to its creators or its characters. But hey, maybe all of the creators are working together on this one. Who knows?

What are your thoughts Shelby? Is this book shaping up for you? Do you like the direction Carol and Kyle are going? What about the “New” Guardians? Do you think they are doing enough to differentiate themselves from their departed brethren, or are they no better? Oh, and what about Brad Walker? I’m really digging his stuff.

Shelby: I’m feeling … better about the direction this book is heading. I don’t know yet if I’m totally sold on it, but it’s looking more promising than it was last issue.

Mik, I am one hundred percent in agreement with you about Carol’s role in the Green Lantern universe. Having Hal be the source of her love and therefore the source of her power makes me extremely uneasy. Especially after her decision to continue to love him but deny herself of him because he’s bad for her. Sister, that is not a healthy relationship, you need to cut that shit out! While I like the idea of Kyle and Carol having a romantic relationship, I think I like the idea of their love being platonic even more. We’ve already got someicky concepts to deal with with the all lady Star Sapphires, we don’t need to add to the list a requisite love of a man as their power source.

I’m intrigued by Relic, especially with Walker handling pencils. The whole scene with Relic absorbing the power of everything in sight while mashing the ships together into what he needed reminded me a lot of Akira, specifically when Tetsuo can’t contain the Akira force and his body begins to expand and absorb everything. I’d post a video, but it’s kind of gross in an overly fleshy sort of way; just do a YouTube search for “akira tetsuo transformation,” you’ll find it. Even though the fleshy expansion isn’t there, the technical aspects of what Relic is doing to Kyle are similar, and that visceral pain Kyle feels is made obvious in the incredible image you posted above.

As intriguing a villain as he is, I can’t help but feel like this is all something I’ve seen before, very recently. Depowered rings, Guardians making mistakes, powers being wielded in ways that cannot be understood, these are all things we saw in Rise of the Third Army and Wrath of the First Lantern. It’s just same shit, different day: I’m hoping Jordan is going to prove to us that this isn’t just a retread of what we’ve already seen. This could be the chance for Kyle to break away from the oppressive yoke of the Green Lantern universe and come into his own again. Most importantly, though: where can I get one of those adorable Ferris Air shirts Carol is wearing when she goes to rescue Kyle? You hear me, WeLoveFine? This has your name written all over it!