Scott: I recently watched a birth. I wasn’t in the room, I just saw footage that’s going to be used in a documentary, but trust me, it was enough. As anyone who has ever witnessed a birth can surely tell you, it’s not recommended for those with weak stomachs. At the same time, and probably for the same reason, it’s impossible to look away. It’s human nature; when you’re faced with something you don’t really want to see, you just have to look. It’s why, when you cover your eyes during a scary scene in a movie, you still peek through the cracks of your fingers. The same thing happened to me while reading Animal Man 22. Writer Jeff Lemire and artist Steve Pugh have crafted an issue full of things I never wanted to see, thus ensuring I wouldn’t look away. Those clever bastards…

Animal Man 22 picks up with Maxine exploring The Red and Buddy searching for an animal-murdering monster. While Maxine discovers she can reinvent the landscape of The Red in her own image, there are limits to her powers, as she learns when she tries to bring Cliff to life using new body parts, only to end up with a soulless husk of her dead brother. Buddy, meanwhile, tracks down the monster, only to find many more man-animals just like it, who swarm Buddy and hack him with an ax. Buddy wakes up sometime later on an operating table and learns that the monsters are extremely radical animal rights activists, trying to obtain something they believe Buddy has- a bond with The Red. They’ve taken Buddy’s blood and deliver it Brother Blood, the leader of Hollywood’s creepiest cult.

Lemire and Pugh are showing off the versatility of the word ‘gross’. I’d say they have the market cornered when it comes to cute-gross; fresh from the imagination of five-year-old Maxine, The Red looks like it belongs on a corner of a Candy Land board. It’s only when you look closer and realize it’s still a land made of flesh and bones that you start to feel a little uneasy. Even more unsettling, however, is that Maxine seems perfectly comfortable playing with organs. I thought she might be too young to really understand what’s going on, but then again, she seems to have a pretty impressive understanding of the human anatomy.

Maxine’s ability to manipulate The Red is beyond her years, but she’s still naive in some respects. I was glad that Shepherd told Socks to shut up for a minute so that Maxine could figure out on her own that bringing Cliff back to life wouldn’t be as easy as she imagined. Maxine is certainly ‘bullheaded’- just like any little kid who thinks she has a brilliant idea- and no amount of pleading from Socks would convince her that her plan wasn’t going to work. It’s obvious to everyone except Maxine that the Cliff she has created is only a shell of his former self, but that only heightens the impact of watching it sink in for Maxine. The realization is gross, creepy, and a little bit adorable.

If the whole cute-gross thing weirds you out, maybe Buddy’s half of the issue is more your style. His pages are straight up freak-show horror. What started as an innocent story about Buddy trying to find some lost pets has devolved into a stomach-churningly gruesome spectacle. But the monsters, or ‘Splinterfolk’ as they’re called, are more than just the mindless killers they first appear to be. The fact they’ve graphed animal parts onto their bodies in an attempt to be more like Buddy adds a new dimension to the story. Buddy’s connection to The Red is their inspiration (although their efforts to get closer to The Red are twisted beyond comprehension). That makes it difficult to brand these guys as evil- who can hate animal rights activists?- they’re just very, very misguided. And scary.

Drawing Buddy’s attention by kidnapping animals was hardly a mistake, it was their plan all along- or rather, Brother Blood’s plan. It’s a pretty smart plan at that, the only drawback being the massive attention from the media Buddy is currently getting. It’s actually kind of comforting to know that, while Buddy’s getting hacked up by the Splinterfolk, there are dozens of reporters and cameraman right outside the door. Eventually they were bound to notice that there are no cast trailers or craft services set up outside and that the screams they are hearing are not just part of some movie Buddy is filming. I like how Lemire sets up the cliff-hanger three quarters of the way into the issue; we never find out what happens after the reporters barge in. Instead, we follow Buddy’s blood to Brother Blood, and Lemire essentially ignores the question of “what happened to Buddy?” in favor of raising the question “who the hell is Brother Blood?” I tend to like when multiple questions can be answered at once, and I think that’s what he’s setting up.

So Shelby, what kind of gross do you prefer? I really thought this was a well-rounded issue, at least within the realm where Animal Man operates. It’s awesome to see a writer and an artist gel as well as Lemire and Pugh do here. Their styles are perfectly in sync. Do you think that means they both have wonderfully creative imagination, like Maxine, or are they just a couple of sick, twisted dudes?

Shelby: Honestly, can’t they be both? I firmly believe creative and imaginative and sick and twisted are not mutually exclusive states. My first exposure to Animal Man was a marathon of six or so issues, and it literally gave me nightmares, precisely because of panels like these, and I love every second of it. 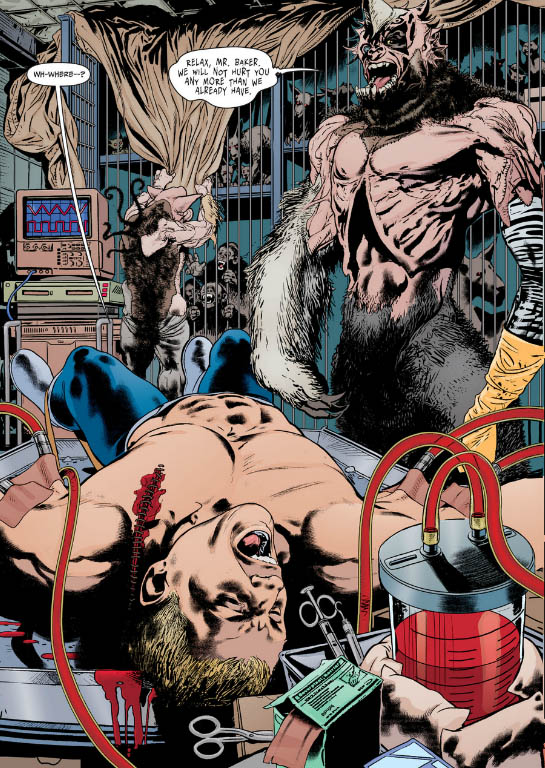 Scott, you are perfectly correct when you state Lemire and Pugh are “in sync” for this title. As horrifying and disgusting as it often is, Pugh’s art is perfectly appropriate for the story being told. We are dealing with the Red, the web of animal life. It’s all about flesh and muscle, bone and sinew. It’s not a matter of being gross for shock value, we’re just literally encountering animal bodies and all the squishy pieces that make them up. It’s why I love the sequence of Maxine in the Red so much. It’s easy for us to see the brain fields and only think violence and gore, but Maxine sees it for what it is: the natural building blocks of which all animals (man included) are composed.

The Splinterfolk are the flipside of that coin. They’ve taken nature and perverted it into something that is truly horrifying. Their position as animal right’s activists so passionate about animals they are willing to torture and kill them in order to be more like them reminded me of a story I read recently about PETA animal shelters. Apparently, instead of working to achieve the “no-kill shelter” status, which constitues a 90% adoption rate, PETA figures it’s better for the animals to just put them out of their misery; PETA shelters tend to have a near 90% euthanization rate as a result. It’s that same sort of blind hypocrisy that leads the Splinterfolk to mutilate both animals and themselves to try to better emulate the very same animals, all in the name of love. It’s a story that is just grounded enough in our reality for the reader to relate to, but twisted enough to fit into the bloody, meaty world Lemire and Pugh have crafted.