Patrick: We spent last month with The Killer Croc — an oddly blunt instrument for symphony as subtle and sophisticated as Batwoman. A few pages in to this issue, and we become aware that our heroes are searching for Bane to ask him for advice on how to capture Batman. I know Bane’s actually done this before, but it is interesting to see the brutish villains popping up in a more cerebral title. And the party doesn’t end there — the ranks of the good guys and the bad are fleshed out with soldiers and psychopaths. How exactly these opposing forced are going to accomplish their goals is another topic of conversation altogether.

The D.E.O. has set their nose to the grindstone on this whole “catching Batman” thing. Now that they’ve got Batwoman blackmailed into taking up their crusade, the question moves from “who’s going to do it?” to “how is Batwoman going to do it?” And who best to ask but half a dozen of Gotham’s notorious supervillains? Well, “notorious” might be overselling their infamy a little. Batwoman and Flamebird track Bane to Alaska, and pin him down for some Batman-catching advice, but the rest comes from Batman’s back-up bench of rogues: Black Mask, The Mortician, Fright, and Professor Pyg. Batwoman and the D.E.O. cook up a plan, but the readers aren’t privy to what that plan is exactly. We are privy to the COUNTERPLAN that Flamebird is going to put into action, aided by Jacob and his old army buddies. The stage is set for daring faux-Batman-hunting and cousin rescuing!

We end up reading a lot of comics that “put the pieces into place” for the next issue. They’re usually penultimate issues in a story, and they generally suffer from weird pacing and an excess of exposition. And while you grumble about it at the time, the theory is that, by the next month, the series is able to pay off all that tedious set-up. This is a criticism we tend to level against Justice League or Avengers — books that try to anchor big, dumb world-changing events. Batwoman is an island — it may as well exist in its own universe, so the fact that Beth is alive, and in captivity, is a big world-changing event. This series has never been particularly goal-oriented: the quest for the missing children was more-or-less a MacGuffin so we could explore the nature of myths, legends and monsters and we’ve had three delightful character digressions in the last year. J. H. Williams and W. Haden Blackman are just more interested in the journey than the destination — so what’s up with getting an issue that focuses do heavily on what we can expect to see next time?

For one thing, there’s an obvious difference in the way these two factions prepare for their respective missions. The D.E.O., apparently content to cast their lot with the likes of Professor Pyg, spend their prep-time interrogating Batman villains for information on how to catch and subdue Batman. I suppose these would be the closest thing you’re every going to come to experts in the field of Batman-hunting, but they all offer advice that ranges from incoherent to just plain insane. And with the exception of Bane, the rogues are basically peacefully interviewed, and their crazy little thoughts are scribbled down in a notebook — it’s an approach that doesn’t require and work or any discipline to attain. Bette, on the other hand, is working her ass off to get into fighting shape so she can infiltrate D.E.O. headquarters. Hell, we can’t even be introduced to Jake Kane’s Murder of Crows without being reminded of the bumps and bruises they’ve sustained during training.

But other than this “good guys work hard, bad guys don’t” lesson, this issue is sorta light. Batwoman’s been marginalized by the D.E.O for so long, and this issue sees her as their lapdog exclusively. I know that’s all part of the plan, but it’s a real bummer to see your protagonist jerked around like a puppet, completely robbed of her agency. Which, I guess makes a pretty strong argument for Bette being the main character of this issue. Or, more intriguingly, all the agency in this issue belongs to the Kane family, acting as a single cohesive unit. Some of them serve the greater good by punching Crows in the face, some train their nieces as superheroes and still others lull secret organizations into a false sense of security. Everyone plays their part, I guess.

Drew, do you find more to hang on to here? I like having Beth’s rescue set up as the be-all-end-all for the Kanes, but it sure is frustrating to see Kate sidelined so much. And whither Maggie?

Drew: I suspect Williams and Blackman are intentionally holding back playing their Maggie card until they’re ready for things to get a bit more emotional — much like they did with the intervention scene in issue 20. There’s enough stuff going on here that I barely notice the absence of one of the primary players, which I think is the point. Maggie’s entrance next issue will be some kind of badass surprise the D.E.O. can’t see coming. We still don’t know exactly how Kate’s distraction (or the 30 hours she needs to set it up) fits with Bette’s frontal-assault, but I suspect Maggie will play a key role.

Patrick, I’m glad you commented on the difference between the preparations Kate and Bette are making. To me, it’s the nature of those differences that really peg the D.E.O. as bad guys — while Bette is doggedly training for what looks like some very straightforward rescuing, Kate is tangled in some ever-more-complicated scheme to trap a hero. But how exactly do these interviews help the D.E.O. bring in Batman? Aside from Bane, the villains mostly just offer useless crackpot theorizing, ranging from “Batman is crazy” to “Batman is a robot” — that is to say, they know less about Batman than Kate does. It seems clear that these interviews won’t help Kate capture Batman at all, and are designed either to buy Bette time to prepare, or to be somehow used against the D.E.O.

This series has long been a site favorite because of its strong character work and its incredible art. As Patrick pointed out, this issue is a bit lighter on the former, but the latter more than justifies the cost of admission. Trevor McCarthy just keeps getting better, and I’m particularly impressed with the clarity of motion in the action sequences. He basically goes through Bette’s training scene twice — once in the footage the Kanes are watching, and again as the Murder of Crows are commenting on how tough Bette is. It turns what could have felt like two choppy, sequences of disconnected images into a coherent whole, adding a sense of reality to Bette’s training.

The interrogation scene could have been equally choppy — Williams and Blackman splice together the four testimonies to create a meta-interview — but McCarthy’s attention to detail really sells the structure. Each individual’s interview can be read straight through, but it’s that same sense of motion that makes that clear. 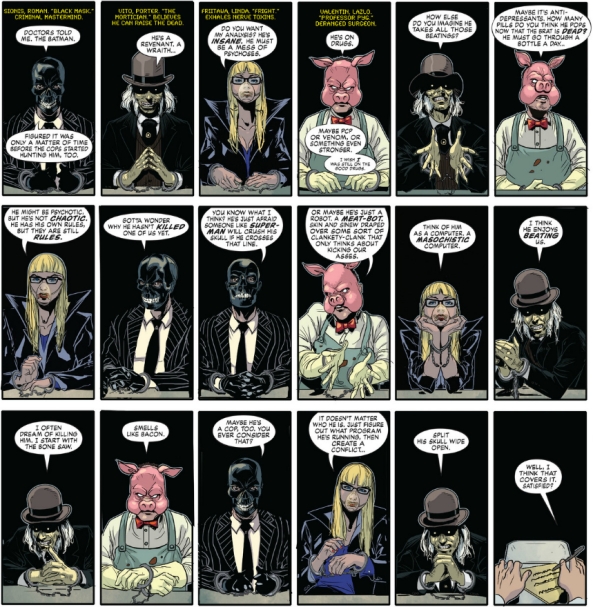 It’s the Mortician’s hands that really drive that point home for me, but all of the characters’ lines work on their own AND in tandem with the others’. It’s a clever trick that Williams and Blackman pull, but it only works because McCarthy sells it.

Patrick is right to suggest that this issue is putting the pieces in place for the next issue, but I think it also effectively builds up excitement for that issue. This obedient Kate is someone we hardly recognize, but it’s only by taking away the Batwoman we know and love that we come to miss her. I think that gambit mostly pays off — I might actually be more excited to see what happens next than if Kate had just been Kate this whole time. I can’t wait to see her return to form in the 30 hours she has out of the D.E.O.’s line of sight, or how Maggie and Bette fit into all of this.