Shelby: We’ve all heard the cautionary tale of the boy who cried wolf. He was a shepherd, and since watching sheep is a super boring job, he would shout that there was a wolf coming; everyone would run to save the herd, and he’d laugh and laugh because he was kind of a dick like that. After a few rounds of this, when a wolf actually appeared, no one believed the boy when he cried for help, and all the sheep got eaten. Lesson learned: if you’re going to be an ass and lie to people all the time, no one will believe you when you tell the truth. Now, who in the comic book universe do we know who’s a lying ass all the time…

As we saw in Justice League Dark 22, John has lured Shazam away from the group with a promise of info about his real family. What he actually wanted to do was trick Billy into un-Shazamming himself so he could swap voices with the kid and steal his power for a little bit. He doesn’t want to keep it, or anything; he’s actually trying to stop the Trinity War by removing one of it’s most powerful players. Seeing that Billy is just a kid seemingly reinforces John’s idea that Billy can’t be trusted with that much power. At the same time, Mr. E activates a henchman of the Cult of the Cold Flame, turning him into a giant demon, and instructing it to bring him the Englishman’s head. John has no choice but to summon the power of Shazam!

A fight ensues, and between John’s new superheroness and some quick thinking on Billy’s part, the demon is defeated and Billy gets his voice and power back. John tries to explain himself and warns Billy about Pandora’s box, giving him the “don’t tempt me Frodo!” speech: Billy may mean well by it, but by touching it he would only “light the fuse.” Billy is appropriately skeptical after the kidnapping and power-stealing. He leaves, and we discover that John was actually gored by the demon; as his friend tries to patch him up, John has an out-of-body experience and encounters Chris, the kid he let die way back in issue one.

John, John, John: you are such an idiot. I don’t blame him his distrust of Billy with that much power, especially considering that Billy kind of already set off the Trinity War with his actions in Khandaq. It was exactly what John was talking about, too; Billy was trying to do right by Black Adam, and he inadvertently set off a massive costumed battle. But kidnapping Billy and stealing his power from him is exactly the wrong way to go about it. How exactly did John think that was going to work? It looked like he was literally going to “bottle up” the power of Shazam, but was he just going to leave Billy cooling his heels, handcuffed to a bar, until the whole thing blew over? The worst part is that John is probably right. Billy shouldn’t be anywhere near Pandora’s box; if someone wielding that much power is corrupted at all, well, we all saw how Black Adam turned out. And John didn’t mean to use the power of Shazam, he only did so after the demon jabbed him in the gut. It’s interesting how powerful Shazam really is; John is kind of THE guy when it comes to magic, and he could barely wield it. It only serves to highlight just how important it is that Billy stays on the right side of this conflict, whatever that side may turn out to be.

Renato Guedes is back on pencils this issue, and I’m glad to have him. His skewed, fish-eye lense view of the world isn’t quite as prevalent as it was in issues past, but I love his take on a Shazam-ified Constantine. I especially love the way the collar of the cape mimics the collar on his trench coat. What I’m most excited for, though, is seeing Constantine’s encounter with Chris next issue. 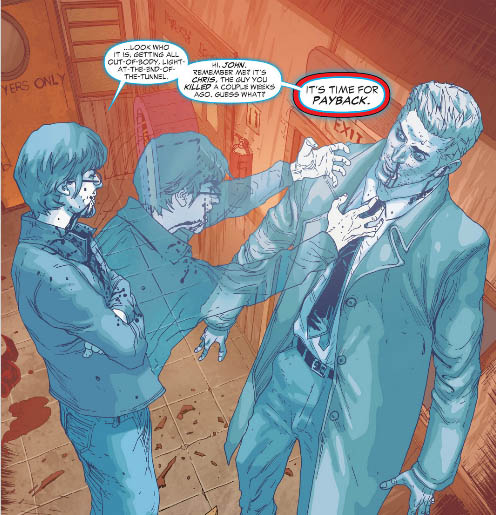 One of our biggest criticisms of the first issue of this title was how callously Constantine sacrificed Chris to Sargon. Here was a kid who was suffering, who had gone to Constantine for help, and was rewarded by being used and horribly, painfully murdered. It seemed a little much, even for John Constantine. Last issue saw John feeling bad for what he had done to Chris, and now it looks like John is going to have to confront his actions and really take responsibility for them. It seems like there are lines, even for someone like John, and that he crossed one by betraying Chris the way he did. Now he’s going to have to face the music, and I’m curious to see how he’s going to handle that. Will he try to Constantine his way out of it, or will he really own up to what he did? Taylor, what do you think, is John going to be able to come to terms with what he did to Chris? Is there any chance Billy is going to heed his warning about Pandora’s box? How weirdly bad-ass was Constantine Shazam?

Taylor: It’s interesting to speculate on how Constantine will handle this Chris situation. As you mentioned, Shelby, he has expressed remorse for the manner in which things played out but it’s not like he’s made a conscious effort to amend his ways. Instead of reforming and ceasing his conman lifestyle, Constantine tempts a kid (though to his credit he didn’t know Shazam was kid) and steals his powers all in an effort to meet his goals. Sure, Constantine is doing what he thinks will be best for the world, but why couldn’t he have been more up front about it? On the one hand I trust Constantine when it comes to all things magic, but, as always, the question on the other hand is are the ends justified by the means? So, while Constantine attempts to steals Billy’s powers, which is suspect, its for a good cause. Likewise, he used Chris to combat the Cult of the Cold Flame but in doing so ended up killing him. So what is the price of a safe world to Constantine? Also, does he maybe have an addiction to conning? Could the man actually act genuinely toward anyone at this point in his life? These are interesting questions which are only deepened in this issue. Speaking of which, I should talk about it a little it.

Seeing Constantine assume the mantel of Shazam, even if just for a minute or two, is a fun move by Ray Fawkes and Guedes. At the beginning of this issue Constantine speaks of all the superheroes caught up in the Trinity War in a derisive way. He chooses to call them “costumes” which can’t be interpreted in any other way than as an insult and it’s clear he has little faith in their ability to resolve their issues. Essentially, to say that Constantine has a low opinion of superheroes is akin to saying the British are fascinated by royal babies. However, in a twist of events, Constantine if forced to actually become the very thing he seems to loath so much. Brute force, ala Superman, has never been Constantine’s forte and it’s telling that even pumped up on Shazam’s powers he has trouble defeating Mopmop. The irony of the situation is interesting on several levels, but none is more interesting than the clear discomfort Constantine feels as a traditional, superhero even though he is the star of his very own comic book.

Guedes does an excellent job of portraying this discomfort. The angel of the camera is such that despite his magical muscles, Constantine still looks small. Additionally, the look on Constantine’s face isn’t that of someone who has just triumphed over evil. Rather, it’s the face of someone going about a necessary, yet disgusting duty, like emptying the trashcan and having garbage water land on your foot. And while Constantine speaks of the immense power he feels while Shazamed, he doesn’t look powerful in this panel. He looks like a man who has been gored and is near death. Not the type of thing we expect from someone who usually is in control the situation at all times.

Of course Constantine ends up having to give the Shazam powers back to Billy which solidifies this issue as a losing effort for Constantine. While the intervention of Mopmop certainly plays a roll in this, I never got the feeling that Constantine was fully in control of the situation throughout this issue. He admits that he’s playing everything by ear at the beginning of the issue but it’s still strange to see things go off the rails for him so easily and quickly. Perhaps most telling of how much things get mucked up is Billy’s clear distrust for the man.

Billy seems to know exactly what Constantine is and how he operates. He grasps the notion that sometimes Constantine will try to get you to act one way by persuading you to act in another. The only other person who seems to be able to see through the constant Constantine bullshit is Zatana, but she’s able to do so because she perhaps knows him better than anyone. Is Billy, for all of his youth, actually more on the ball than his grownup counterparts? Or could it be that kids are all kind of mean and manipulative, just like Constantine, so he easily understands how to handle the occult extraordinaire? Whatever the case may be it’s a little unsettling to see Constantine so off his game. What this could imply about the Trinity War is a bit staggering. If even Constantine is out of his league (or should I say, Justice League) shouldn’t we all be a little worried?