Ethan: Comics love to play with the idea of the parallel universe. As we grow in our understanding of the world and our galactic context, human nature still seems to gravitate towards the mystical Unknown. At the end of the day, we don’t always like feeling like we understand everything. We like horizons, unexplored places, whether it’s the vast, unplumbed expanses of the ocean floor or the weird, extreme, unvisited zones where black holes gobble up entire stars. So it makes sense that when given half an excuse, author Kieron Gillen and artists Jamie McKelvie and Mike Norton take us on a whirlwind tour through alternate realities full of bird-people, dead gods, and flying taxis. Young Avengers #8 takes as its setting the ancient and eternal game of wondering “what if?” while serving up it’s signature fare of hilarious teenage dialogue and angst.

The Young Avengers are sprinting through parallel dimensions, chasing the Patriot look-alike who zapped Speed in the previous issue. Most of the dimensions they pass through are nightmares, but they manage to take a break from the horror by stopping in on Earth-212 for Korean barbeque. When they resume their chase, their first stop is a post-apocalyptic Earth that was seized by an alternate-reality Noh-Varr as the capital of the Kree empire (world domination by Noh-Varr is a common theme across several realities). When a bevvy of Exterminatrixes show up (“Exterminatrices” for you Latin language lovers), they flee to a dimension full of adorable, four-eared, Furby-Gremlin hybrids. Still following the trail, they drop into a white-walled world of flat, square planes which turns out to be the home-dimension of “Mother,” the parasitic entity that brainwashed their parents. Miss America does her thing, kicking them into the next dimension, but the portal closes before Teddy and David can follow. While the rest of the gang take stock of their latest surroundings (which includes Loki’s BFF/arch-nemisis, Leah) Teddy and David look for a way out of Mother’s world. That’s about it for that issue! Not much else to say. Oh, except that one panel at the very end, the one where Prodigy kisses Teddy on the mouth.

As much as I’d prefer not to begin with the ending, it’s a little distracting, so let’s tackle that first. 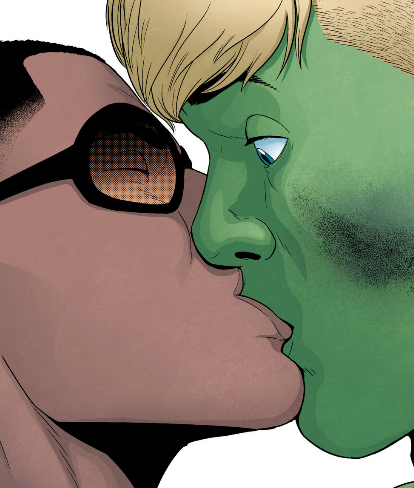 Mainly, I’m confused. David knows that Teddy’s in a happy relationship with Billy. David is not typically the kind of jerk that goes around macking on other people’s significant others. Finally, RIGHT before this scene, David admitted that the reason he isn’t good at magic is because it’s based on irrationality, and he’s “never been much good at [irrationality].” While the issue seems to be pointing us towards thinking that it’s kind of a “don’t want any regrets if we die here” kind of move, I’m inclined to think that Prodigy has a non-romantic good reason for doing what he did. For the life of me, I can’t think of how this would be a tactical move to get them out of danger, but given the aforementioned reasons it feels like there might be. As I’ve admitted before, though, I’m a rotten guesser, so we’ll just have to wait and see what the hell is going on.

Let’s get back to the other 99% of the issue. Alternate universes! Age of Ultron messed with our heads good and plenty, forcing us to watch its ghastly parade of favorite characters murdered, plus Tony Stark without a gotee. Naked face-flesh and shudders all around. Whatever you thought of that arc, it was in good company – alternate reality is a common theme in comic books. The idea keeps popping up for the same reason that people enjoy reboots and remixes: they take HUGE bodies of existing material – ideas and themes that with enormous canons and rabid followers – and play with them. Keep the essentials that you’ve come to love over the years and decads, but throw a twist on them by tweaking an origin story or changing the gender of a protagonist. You get the warm-fuzzy of familiarity with a fresh dose of novelty. You get to experience the truism of “the more things change, the more they stay the same.”

This issue had plenty of alt-realities to share, too. The cover alone was packed with them – I stared at it for a few minutes, trying to puzzle them apart. I’m not sure I ever figured them all out, but I do have to say that Mohawk Wiccan runs an extremely close second place to Eyepatch-Noh-Varr. With Miss-Robo-America creeping me out too much to give her a Coolness Rank.

My favorite dimension inside the issue has to be the home of the Furby-Gremlins. Not because of its little, furry denizens so much as for the crazy constellation hanging in the sky above them – a collection of millions of stars that happens to be a dead-on portrait of Billy. 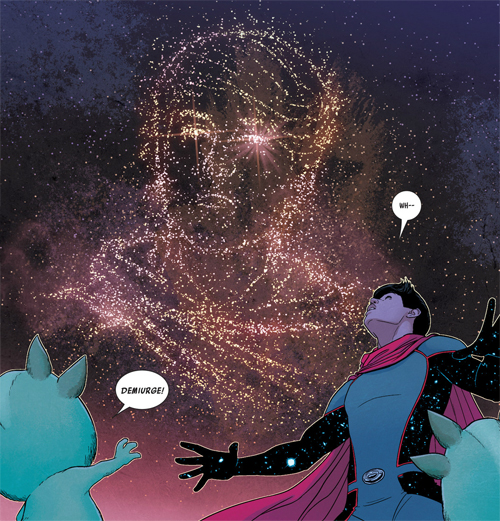 That one scene triggered a ton of questions and theories all at once for me. The issue establishes that the realities they keep jumping through all have a very personal connection to the characters -each place somehow directly owes its existence to them, whether it’s full of bird-bodied Kate-clones or yet another Earth that Noh-Varr has claimed as the capital of the Kree Empire. So, back in Furby-land, Billy is clearly its author – perhaps his reality-warping powers got the best of him in (a la his mother, the Scarlet Witch in the House of M) and he decided to re-order the universe in his own image? If so, what are the little critters? Did he turn the entire human population into tiny, Demiurge-worshipping animals that look like teddy bears? In just the previous issue, Loki was messing with Teddy by raising the questions of how improbable his relationship with Billy really was, and how coincidental that Billy’s superpower happens to be the ability to re-write reality.

Shelby, please save me from my ramblings. In a recent post you talked a little bit about the dangers of what-if-ing one’s way too far and losing touch with the core story, but the different worlds in this issue seemed to me more like a backdrop than a distraction – would you agree? And I’m dying that I did not get to the amazing dialogue in this issue, because I think it was superb – what was your favorite exchange?

Shelby: While I definitely love crying out against excessive speculation, there’s actually a lot of interesting tidbits in these various alternate universes. Billy’s universe as Demiurge is intriguing. Because Wikipedia never fails me, I looked up the term; demiurge refers to a Platonic idea of an artisan figure who crafts the universe. Not in a religious, god-like way, in a “hey, I found these raw materials and made something” kind of way. Then there’s the plethora of Noh-Varr ruled dystopias; not only are there so many, they all seem to be horrific. And I LOVE the visual  detail in the Mother Parasite’s universe. Remember how she wants to take all the kids and slowly feed off of them until there’s nothing left, and also how her world is basically a comic book template with only panel layouts? Check out her other prisoners.

This universe has been broken down into the bare elements of a comic book page, and McKelvie is running with it. Those poor prisoners are being stripped down to their bare, wireframe bones. For those of you who aren’t familiar, that’s how you start off drawing figures: simple shapes to capture the basic pose and proportions of the human body. You come back later and flesh them out as appropriate. That’s the sort of visual detail that makes me lose my mind with it’s cleverness; it’s such a smart way to represent the idea of this particular universe and its rules. Plus, it looks so cool.

Raving about McKelvie’s stellar art aside, I wonder if Pat-ri-NOT is leading the crew through these specific universes for a reason. Maybe he’s trying to teach them something about their fellow teammates: that Noh-Varr is not to be trusted despite his charming handsomeness, that Billy’s powers might be incredible, but that he’s too interested in cuteness to be a threat, etc. Maybe he’s just trying to sow dissention amongst the ranks; I feel like every terrible, Kree-ruled universe makes Kate slightly less fond of Noh-Varr. Maybe he’s just trying to break them however he can. We’ve still got way more questions than answers concerning this story.

Luckily, that gives us more time to spend with the team and their delightful dialogue. Gillen has such a way with these characters; they’re youthful without appearing patronizing towards actual teens. So often when teens are written, it’s painfully obvious the writer is trying to sound like what he or she thinks teens sound like, and that is not the case here. And as an added bonus, despite my jaded, quarter-life-crisis disdain towards youths, I love reading these kids. My favorite moment has got to be David’s attempted warning to Miss America about punching the Exterminatrix in the…uh, face? 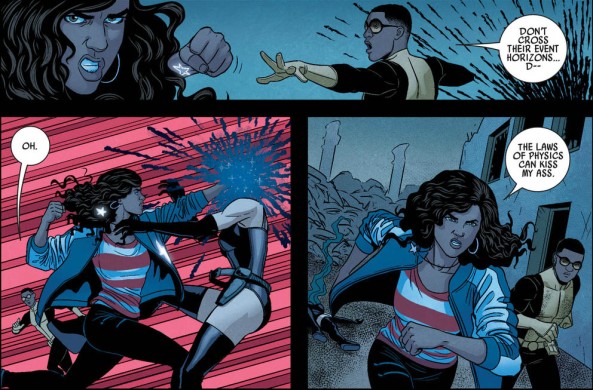 David’s no dummy, and any other person wouldn’t want to get anywhere near a black hole, even a little one mounted on some sort of sexy lady. But who does he think he’s talking to? Miss America can literally kick holes in reality, she’s not going to let the threat of spaghettification stop her from punching something in the face. Between McKelvie’s clean and creative style and Gillen’s solid characters and compelling story, it’s no wonder this book is one of my favorites every month.