Shelby: I hate a story that drags on too long. As a creator, it’s important to be able to edit yourself; you have to know where you want a story to go and be able to recognize when it gets there. At the same time, it’s just as frustrating as a reader when the story feels rushed. If I’ve settled in to savor a story as it unfolds, a sudden, “…andthenthegoodguyswinordidtheytheend,” is incredibly unsatisfying. A full-stop, wrap-it-up conclusion to a story arc just leaves me feeling confused, like maybe I missed an issue or something. As excited as I have been for Brian Wood’s X-Men, the end of the first arc has me feeling just that: confused and unsatisfied.

Our team has been broken up into two teams, sort of. Kitty is at the school with some students, dealing with the Arkea aftermath. Storm, Rogue, and everyone else have landed in Budapest; Arkea it seems has returned to her landing site. There’s a hospital there chock-full of patients who are themselves chock-full of of cybernetic implants. It’s also the same place Jubilee got Baby Shogo. A fight ensues; Psylocke gets the drop on Arkea, but doesn’t pull the trigger until Karima makes an appearance and insists on sacrificing herself. Something happens, and Arkea is gone and Karima is still alive, though not fairing too well. Meanwhile, back at the school the bomb goes off but seemingly nothing happens, Arkea runs rampant through the danger room drones, and Kitty is forced to do a hard reset by phasing through their entire server farm.

So, wait, what? What just happened? I feel like Wood just did a hard reset on this story. There are a lot of weird little hints at bigger meanings, implications to come, but none of that changes the fact that this story just ended by asking more questions than it answered. I was most confused by Jubilee’s commentary in the car, first to Shogo and then to Karima. 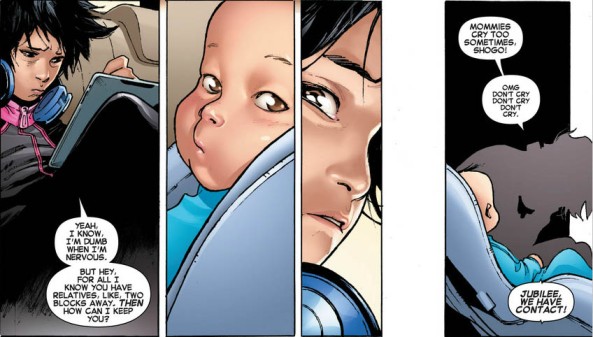 This is actually pretty touching. Jubilee feels mother enough to Shogo to know that she has to do the responsible thing and search for any relatives he might have while they’re in town. She loves him like her own son, and understands how his own loved ones would feel about him being gone. It’s noble and sad…and it means she basically stole that baby. Before that realization can even fully sink in, just a handful of pages later, she defensively declares, “He’s mine, one hundred percent. His name’s Shogo Lee. Don’t wear it out.” So, she suddenly felt the need to ensure she hadn’t kidnapped a baby from his relatives, and just as abruptly decided “jk, he’s MAH BABAY”?

I felt the same abrupt disconnect in the big Arkea showdown. Already, I was a little put off by how little Storm’s team cared about the patients Arkea had possessed. No one expressed any concern that all these sick people trying to get well at this hospital were going to potentially be reset, as we learned last issue, and they certainly didn’t have any trouble punching them in the face. 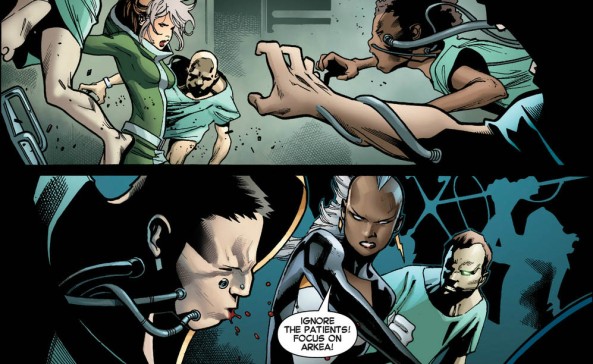 Now, it’s probably just a matter of Arkea being such a threat they can’t afford to show any care towards these innocent people, but it comes off as pretty insensitive. Hypocritical, too, since Storm delayed charging in guns-a-blazin’ precisely because it’s a hospital full of people. She delayed just long enough for Sublime to have the time to explain to us all what Arkea was doing and why she had returned: how convenient.

Even the scenes back at the school left me feeling disappointed. I love seeing Professor Kitty with students, I love seeing her trying to stop Arkea with firewalls, and I love her concern over how much her hard reset is going to cost.

The IT nerd in me can’t help but be impressed by how drastic the situation was, that she was forced to crash all of the servers. Ye gods, what a nightmare that would be. At the same time, even the interactions I enjoyed felt like a clunky set-up for the next story arc. Last issue we were left with the ultimate cliffhanger: a bomb about to hit zero. Except when the timer ran out, nothing seemed to happen. Instead of being grateful that at least one thing was going well, or suspicious/curious about what the device is, Kitty gives an awkward and transparent speech about always assuming that what was supposed to happen did happen. Clearly, this is supposed to be some sort of mystery to carry us into the next arc, it’s just such an obvious trick I couldn’t help but roll my eyes. Even worse was her reaction; instead of locking it away to study later in order to try to figure out what just happened to them, she just has Pixie launch it into space. Am I wrong, or is that the most irresponsible option? A) You just told us that it did something to the school, and you don’t want to try to figure out what that is? B) What if it’s still doing whatever it’s doing? Are you really going to throw it into orbit where it can potentially harm millions?

I’ve likened this issue to a reset a couple times, and it’s frustrating to me that Wood seems to be already resetting what he’s done a mere three issues in. I’m also just really surprised by what I found to be an awkwardly abrupt ending to a story that I was really excited about. Spencer, help me out here: is there something that I’m missing this issue, or was this really as rushed of an ending to the arc as I think it was?

Spencer:  It was certainly a rushed ending, Shelby, I won’t argue with you there. I’ve been pretty vocal on this site about my love of three issue story arcs (such as seen in Avengers and Batgirl), but that doesn’t mean that you should try to cram six issues’ worth of stories into three issues’ worth of space. I feel like that’s what’s going on with this issue, and it resulted in a story that just feels incomplete.

To an extent, I think that sense of incompleteness was intentional on Wood’s part, as much of this issue was an exercise in ambiguity. Take those scenes with Jubilee and Shogo you mentioned, Shelby. You seemed to read it as Jubilee suddenly changing her mind about finding Shogo’s relatives and deciding to keep the baby come Hellfire Club or high water, but my initial read was that Jubilee searched, couldn’t find any of Shogo’s relatives, and was proudly and happily declaring the baby as hers to anyone who’d listen. The thing is, I have no idea which one of us is right, and I honestly feel like we could find several more possible scenarios playing out within that scene if we really tried. The ambiguity of it all creates a slight sense of dread that has me legitimately interested in the future of lil’ Jubibaby.

Likewise, there’s some ambiguity to this panel that I thought was effective in generating speculation. Jubilee introduces Shogo to Karima, and it should be a heartwarming moment. That said, lurking under the surface is the fact that Shogo was Arkea’s first host and Karima her most recent; I can’t help but feel apprehensive watching the two of them interact, especially since we still don’t know just what exactly happened to Arkea.

Speaking of which! That scene was an example of ambiguity failing to elevate a moment. I’m sure the idea behind it was that, not knowing what happened to Arkea, we can’t be sure whether she’s really gone or where she’ll pop up next (and as the paragraph above testifies, it slightly works), but that idea never really pans out. The sudden cut to black feels more jarring than intriguing, plus the fact that Karima survives her apparent sacrifice seems to negate much of the conflict behind this entire arc. Can the X-Men stop Arkea without killing Karima?  Sure, it’s easy! How did she survive Psylocke’s sword when it seemed guaranteed to kill her only a few panels earlier? Who cares?!

Back when Drew and I reviewed Issue 1 of this title we both got hung up on a few similar inconsistencies littered throughout the issue, but the themes of growing up and coming home and the sweet character moments scattered throughout helped smooth over those blips for me. Unfortunately, that doesn’t work quite as well this time around. There’s not much room left to explore Jubilee’s new maturity, and the more the action picks up, the blander the characters seem.

Case in point: we’re three issues into this series, yet Rachel Grey is still a cipher. Her most notable role in this issue is to be the person who objects to the idea of killing Karima, but she still only actually does that once; Rogue just spends the rest of the issue harping about Rachel’s objection. Rachel’s lack of personality or relevancy would be better if she got to do something cool with her powers, but she’s barely used them at all; I literally thought she was depowered in the first issue and nearly exhausted myself scouring the net for confirmation. Storm isn’t much better; at least her leadership role gives her relevancy and a chance to assert herself, but we’ve seen no shades to her personality other than that, and aside from flying in Issue 1 (whoop-de-doo) I don’t think she’s even used her powers once.

The real saving grace of this issue is the plot with Kitty and the students back at the school. Sure, the P.R.Y.D.E. Bomb Squad was another failed exercise in ambiguity (but you already covered why that scene didn’t work, Shelby, so I’ll let it rest), but watching Kitty interact with her students was a lot of fun.

I don’t know the students of the Jean Grey School of Higher Learning that well, but in just a few scenes Wood gives them more personality than most of this book’s main cast. Bling and her efforts to keep out of trouble are fun and endearing, Armor and Hellion’s powers are visually exciting, Pixie’s still adorable (Olivier Coipel does a fantastic job of making everybody look adorable, but Pixie and Shogo are the standouts), and I honestly want to read a whole book about this lil’ guy:

Kitty’s role as teacher (and she seems to be the cool teacher at that) is a neat parallel to Jubilee’s return home as a mother and one of the more interesting elements of the book. Both girls started out as the X-Men’s tag-along sidekicks, and both have grown up and taken on new roles, and it’s a lot of fun to watch. I’d love to see this aspect of the series explored more.

Hopefully Wood hops on that opportunity; for now, I’m still going to stick around and see what he does next. Shelby, you mentioned this feeling like a total reset, but I disagree. Wood’s set up a lot of stuff that’s still lurking in the background, and I think we’ll be exploring the repercussions for a while yet. Yeah, the way he did it left a lot to be desired, but I’m still curious to see what Wood’s got up his sleeve. Hopefully he just takes his time and plays things with a more deft hand in the future; that’s all I ask.