Drew: We often joke about “historical fiction” being an oxymoron, but that mostly stems from a misperception of just how fictionalized history is. Indeed, if history were simply a compilation of irrefutable facts, we could probably stop writing books about the life of Abraham Lincoln or whatever. Instead, we have a messy timeline made up of conflicting accounts and countless ways of explaining all of it. To me, the biggest difference between history and historical fiction is that history needs to back up its conclusions with more facts — it’s basically the narrative between to factual points — whereas historical fiction treats the facts more as a starting point, but doesn’t need to tie back to any facts. In that way, Manhattan Projects has become a kind of meta-historical fiction, taking a fictionalized conclusion as its starting point, and building to ever more spectacular fictions. It’s never been anything other than divorced from reality, but as the narrative continues, it somehow manages to become even less related to history.

The issue picks up with the ramshackle funeral for Enrico Fermi. The team can barely bring themselves not to spit on his grave as they leave, but Einstein and Feynman stay behind to unearth his body in order to begin project Gaia in earnest. You may remember project Gaia as Oppenheimer’s plan to enhance human physiology through genetics. A full year after the funeral, and Einstein and Feynman have dissected and analyzed the genomes of 58 alien species. That year has been kind to Oppenheimer’s other projects, as well. Project Vulcan has successfully created the new most abundant source of energy on Earth, and project Ares seems poised to meet Oppenheimer’s goal of putting men on Mars within two years. Oh, and Oppenheimer’s other plan, the super secret project Charon? That seems to be progressing, too, though the infinite Oppenheimer’s have just successfully convinced him to kill the rest of the team. 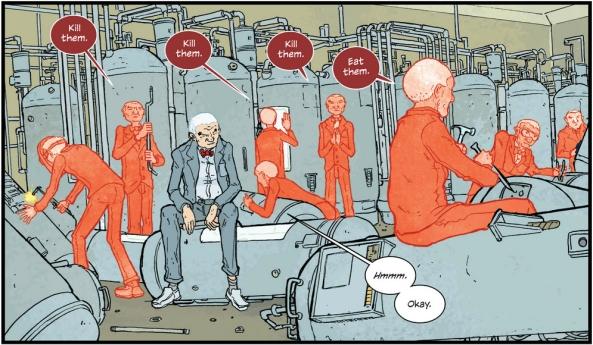 Otherwise, we only get a tiny glimpse of what project Charon might entail. All of those man-sized pods with windows makes me immediately think of cryo-tubes, but I can’t quite explain what that has to do with Charon, ferryman of Hades. It’s also not clear why Oppenheimer would feel the need to sabotage the other projects, but he makes a point of turning over pictures of Groves palling around with Ustinov and Gagarin to a coke-addled JFK.

It’s the presence of JFK that really stuck out to me here — and not just because his Oval Office is littered with used needles and women’s underwear. JFK-as-president places this issue rather firmly in 1961 (or shortly after), which seems oddly specific for a series that has basically kissed reality goodbye. I know we left World War II in the dust a while ago, but I was kind of surprised to realize we’re suddenly in the 1960s. Maybe I need to refresh my memory, but have they addressed why the rest of the world would believe Einstein died in 1955? Why would the team lead the world to think Yuri Gagarin was the first person in space? Why would Laika also be a part of that rouse? Attempting to reconcile this narrative with reality is obviously a mistake, so it’s strange that Hickman tempts us with the presence of JFK. Then again, maybe he just wanted to trot out a goofy impression. 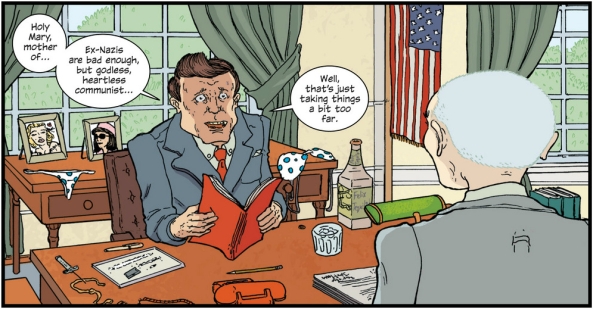 To be fair, this issue is really in exposition mode, which is why I may be so willing to read into JFK’s presence. After the “One year later” banner, we’re basically just catching up with each of the characters and their respective projects. We get a few character beats — Daghlian was slow to get over Fermi’s betrayal, Gagarin is sad to see Laika go — but this is mostly explaining away how next issue will feature space-traveling super-men with a seemingly limitless power source…assuming Oppenheimer doesn’t kill them all first.

I don’t know, Patrick, this issue was all about putting the pieces in place, so it’s hard to judge without seeing the fallout. It wasn’t nearly as interesting as this series best issues, but I think it was every bit as charming. Is that enough, or did this issue fall a little flat for you?

Patrick: The thing that felt strangest to me about this issue was how straightforward it is. I’m used to doing a little mental gymnastics when processing Manhattan Projects – figuring out what takes place in the past, or in someone’s imagination, or an alternate reality, or all three at once. The only time colorist Jordie Bellaire (a name so cool, i just clenched my teeth typing it) gets to use the series’ signature red-on-blue color palette is during the flashback to Fermi’s funeral. And the flashback is presented as it would appear chronologically to boot: before the events of this issue take place. It’s like writer Jonathan Hickman is acknowledging that he’s being honest with us for once – no narrative tricks, nor visual codes, not even any incoherent voice over boxes. There’s even a constant visual motif of exposing cross-sections of objects: the alien body, the shuttle launch, Gagarin’s space suit. 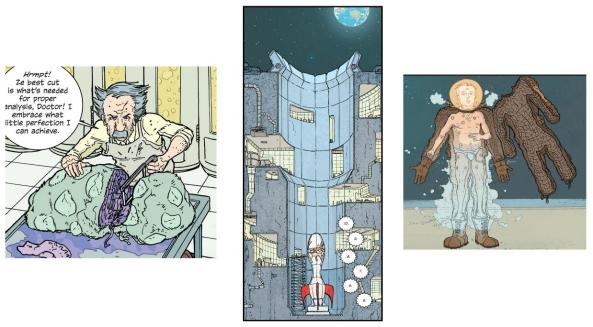 If transparency is the name of the game, then Drew’s questions about how this fits in actual history are even more nagging. In good faith to Mr. Hickman, I’ll take a swing at those I have answers for.

First, Einstein. Maybe we witnessed his death in 1955 back in issue 4; the parallel-world Einstein that’s currently palling about with our heroes never bothered to check in with the rest of our world, preferring instead to just stay in an study the machine other-him had invented. As far as Gagarin and Laika are concerned – we met those characters in issue 6, during which we see them both in space. As far as I can tell, this is still during Truman’s presidency (he’s president during the “now” sections of the next issue), so the chronology here is already pretty far out of whack. Laika wouldn’t go up into space until 1957, three years after Truman’s presidency end. So, maybe we’re just playing it fast and loose with history. If it allows for silly depictions of JFK, then I’m all for it.

On that note, I totally reacted viscerally to the Oval Office being in that state of post-party. There was a moment where I was sort of horrified, but then I flipped back to my earlier issues of Manhattan Projects, and remembered that that office was filled with Free Mason death-orgies during Truman’s administration. The degree to which Hickman is exaggerating for comic effect seems to have gone down a smidge – perhaps in a continuing theme of transparency.

I think Drew hit the nail on the head when he mentioned that this issue is “every bit as charming” as what he’s come to expect. Especially given the faux-historical nature of it’s characters, there are so many very specific choices throughout this issue. Hickman and artist Nick Pitarra aren’t afraid to give the series personality, whether through JFK’s signature (“Keepin’ it real, John F. Kennedy”) or through the fact that someone packed Laika a brown bag lunch for her five year mission to Mars. 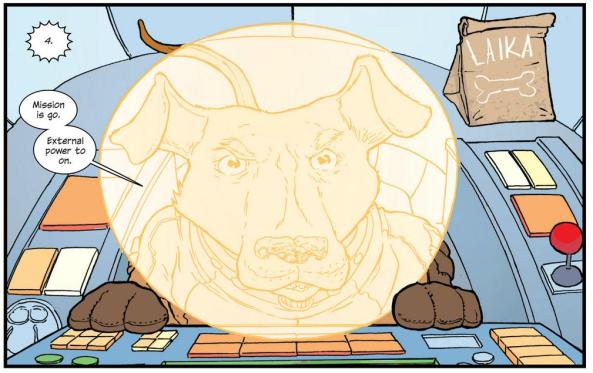 The queen mother of these awesome details has got to be Fermi’s funeral on the very first page. They don’t leave him in an unmarked grave, exactly, but it does look like they spray-painted his name on some rock in the desert, and were sure to add the word “traitor.” There’s also a cake at the funeral that Feynman appears to be the only one eating it, though it also looks like Von Braun gave it a shot before putting it down so he could gesticulate and chuckle. Also, notice that the telekinetic Nazi slave is in the background – wearing a suit instead of next-to-nothing. The single best detail in this image though, has to be that Harry is wearing nice pants and a vest over his protective suit (and holding flowers too!). He’s the only one mourning the loss of his friend. 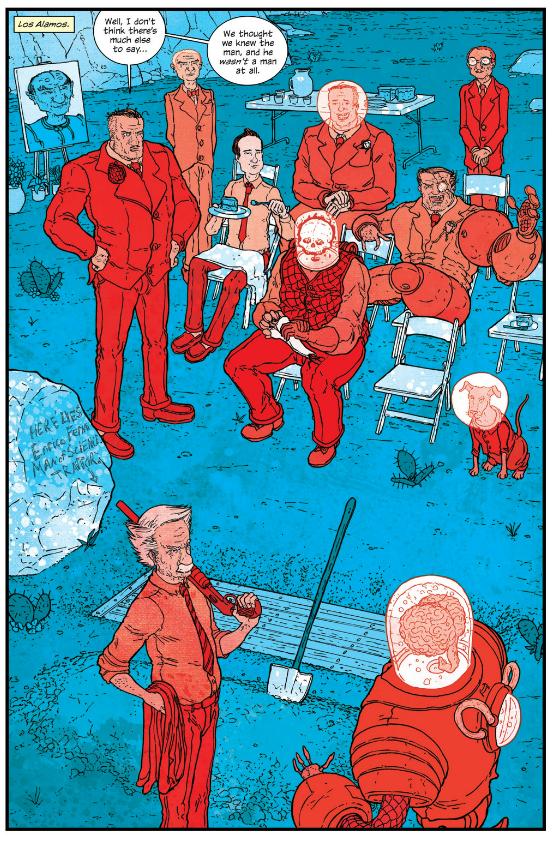 That’s enough personality to carry the rest of the issue right there, if you ask me.