Spencer: “So…what is Infinity actually about?!” It’s a question that, in one form or another, has been tossed around Retcon Punch quite a bit the past few months. Up until now, my answer has always been, “Um…Thanos?,” and even the Preludes over in Avengers and New Avengers did little to clarify things. Thankfully, now that the first issue has dropped, I can finally give a clear answer: “Infinity is the story of what happens when two different universe-ending threats—each capable of supporting a summer crossover all on their own—hit at the same time, leaving the Earth absolutely helpless.” Pretty cool, huh? Now I only hope that the series can live up to the massive threats it’s spent its first issue establishing.

A threat is moving through space, destroying entire worlds, sending the Shi’ar into high alert, and reducing the Skrulls to fleeing in terror: they’re the Builders, the creators of Ex Nihilo and Abyss, and they’re on a collision course with Earth. Left little choice, the newly-expanded Avengers roster launches into space to face the Builders head-on. Meanwhile, one of Thanos’ Outriders has infiltrated Earth, looking for the location of something Thanos desires and finding his answer within the mind of Black Bolt, King of the Inhumans. The Outrider barely escapes with his life and returns to Titan to report his findings. Thanos’ men seem scared to death of fighting Earth, but their ruler can only smile; thanks to a S.W.O.R.D. double agent, he knows that the Earth currently has no Avengers…and thus no chance of rebuffing his attacks!

The above summary is only the broad strokes of the issue’s happenings; there’s a lot going on in this massive first issue, and almost every single detail seems to have been thrown in specifically to build up the dual-threats of Thanos and the Builders to epic proportions. Writer Jonathan Hickman has always had a gift for setting a mood, and he puts that gift to good use in Infinity 1, using a very deliberate pace and multiple title pages to create the feeling that something mythical is happening within this issue’s pages.

Drew and I found ourselves a little overwhelmed by the barrage of new threats Avengers threw our way recently, largely because we had no context to tell us who they were or why they were so dangerous, but Hickman corrects this mistake big time in Infinity. Some of his tricks are simple — the Builders are shown scaring some of Marvel’s most fearsome intergalactic races witless, for example, and Thanos’ world destroying/tribute collecting scheme is certainly beyond evil — but some of his tricks are more elaborate, and thus more effective.

I’ve always found double agents to be a terrifying concept. Not only is someone in a position of authority using our trust against us a much more personal kind of hurt, but the potential they have to interfere with the heroes’ plans is seemingly unlimited. This guy, for example, doesn’t appear to be in a position of high authority with S.W.O.R.D., but he still managed to snag the one piece of information that gave Thanos the go-ahead to attack; what other damage can he cause? How did Thanos even get a double agent into S.W.O.R.D.?! I hope we find out.

Captain Universe’s trip to the planet Galador also shared an interesting — and very meta — side to the threat of the Builders. 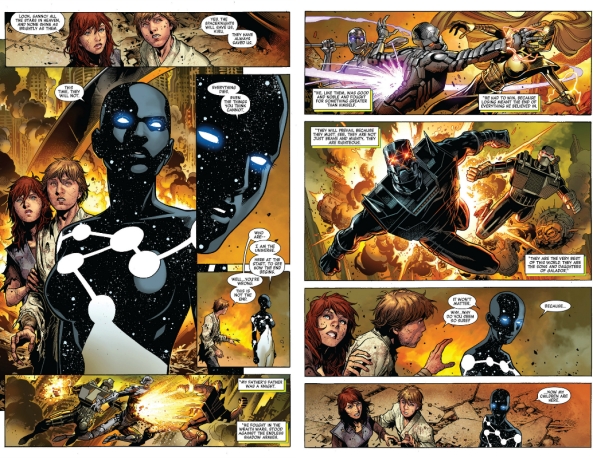 Sanno speaks of the spaceknights with awe and reverence, and the words he uses to describe them reminds me of the ways one describe superheroes such as the Avengers, heroes who “will prevail because they must”, heroes who “are not just brave and mighty, they are righteous.” I feel like Sanno is a stand-in for us readers, and the spaceknights for the superheroes we so love; we too believe they will never be defeated, never die. Of course, in this case, that’s exactly what happens; the Spaceknights and their entire world are destroyed on the next page. That doesn’t leave much hope for our heroes, the Avengers. On some small level I know that the Avengers won’t lose and I know Marvel wouldn’t let them be killed off (at least not for long), but if there’s any writer in Marvel’s stable I wouldn’t put it past to try, it’d be Hickman. More than anything, this scene has me unnerved to discover what Infinity has in store for the Avengers and the Earth.

Of course, an issue that does nothing but pump up the villains might get old fast, and fortunately, Hickman does throw some other elements into the mix. There’s a fascinating history of Black Bolt and the Inhumans (that this rookie fan desperately needed), some nice tie-ins to plot elements from Avengers and New Avengers, and, of course, more fun times with Bobby and Sam!

Hm, I hope that the Star Wars shout-out means Hickman has grand things in store for the space-opera segments of Infinity; it’s certainly one of the gold standards of the genre. (This is also not the only Star Wars reference in the issue; does Sanno remind y’all of anyone?)

Ultimately, though, the reader’s enjoyment of this issue is largely going to boil down to how invested they are in the threats Hickman is establishing and how much faith they have in Hickman to deliver a worthy payoff. While the long, long wait for answers over in Avengers makes me hesitate slightly in saying so, my money’s still on Hickman coming through in the end; after only one issue Hickman seems to already have all his pieces in place, and with only five issue left to tell his story he certainly can’t slow down now.

Patrick, do you share my excitement over Infinity’s concept, or did something about it fall flat for you? Any idea where any of this is going or how it ties into Hickman’s other books, or is it too early to tell? And hey, when did Hawkeye (Mr. “[French stuff, wait, maybe some Italian too?]”) learn such fluent Spanish? I smell a rat.

Patrick: Not actually speaking Spanish right there – it is Italian. Maybe Hickman is just assuming that there’s no way Clint could exist as a landlord / superintendent of an apartment building in Manhattan without accidentally picking up a little Italian. Though, Cap fought in World War II, mightn’t it make for sense for him to know Italian? TRULY, these are the nagging questions.

There certainly is a lot of meat to this issue. If you buy the digital — which might be my recommendation — there’s just a ton of fucking content here. But the reading experience kind of groans under the weight of extra narrative. Let me break it down. The issue starts with two pages from New Avengers 6, followed by the Infinity content from Marvel’s Free Comic Book Day Issue. Between these retreads and title pages (of which there are five, plus one that introduces the enormous cast), it’s not until page 19 that we get any new story content. And then, once Infinity 1 proper has concluded, the digi tacks on the Infinity: The Silver Surfer – Against the Tide infinite comic.

It’s like the whole thing is going to explode, it’s packed so tight. Hickman has repeatedly given the Avengers the mandate to “get bigger” — adding heroes to their ranks until its barely possible to name them all. It’s like he’s taking his own advice and making sure the first issue of his event is so big and ungainly that it’s almost impossible to digest — especially if you spent 200 words talking about how big the issue is.

I think Spencer’s right to say that a reader’s mileage on this series is going to depend greatly on how invested we are in the individual threats facing Earth in this issue. The Star Warsiness of the Avengers’ plan to confront the Builders is fine enough, I guess — I always get nervous when Earth-based characters leave the planet for too long. Both the characters and the audience become disconnected from the thing they’re fighting for. Lucky for me, Hickman put those same concerns (in not so many words) into Starbrand’s mouth.

It’s a little weird that he’s referring to himself in the third person, but Patrick’s cool with it. I trust this is Hickman acknowledging the inherent flaw in pulling off these characters off-world to punch bad guys in space. But I guess time will tell on that one.

The Thanos side of the equation is much more interesting to me. Not only is he threatening Earth directly, but he’s basically using Genestealers with the ability to INVADE YOUR DREAMS to do so. Jim Cheung renders Black Bolt’s dream (or memories or whatever they are) is such a straightforward way, usually with the characters in question simply lined up, as if for a family portrait. This is partially for efficiency’s sake, so we know what information the Outrider is divining, but it also suggests that the Outrider is just getting the fact — too cold and evil to get any of the emotional connotations behind anything that its seeing. And I love that, even in these clinical, line-ups, Cheung finds a way to be a little poetic, showing the destroyed Infinity Gems as held by skeletons in Illuminati costumes. 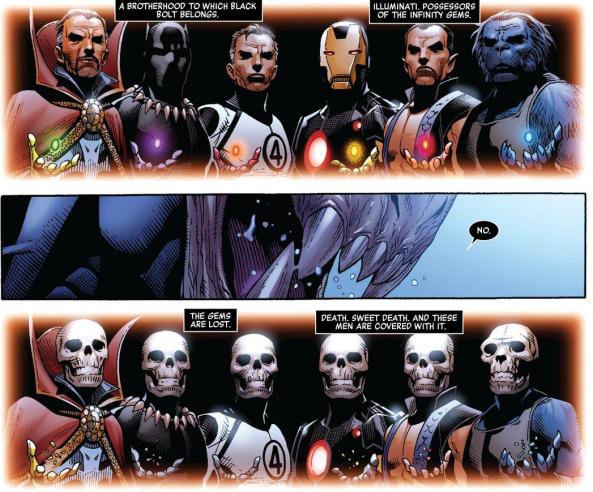 And it might be a hard and fast CLUE there — the Time Gem, which reportedly vanished in issue 4 — is not pictured shattering. What does that even mean?! Hickman is one of those writers that takes the latter half of the advice “show; don’t tell,” but then sometimes neglects to be clear in his showing (what for want of telling).

Here’s an example of Hickman doing “show don’t tell” incredibly well: that whole raid on the Skrull family (the “Orbital” section). It’s just a cute little story about kickin’ in doors and finding a group of Skrulls eating pizza, right? It is that, but it serves as a reminder of just how big Marvel’s universe is already. We have a fun little reminder that warfare with intergalactic races of aliens is nothing new for the Avengers — almost routine. So when they’re all staring at a monitor later, mouths agape in horror at the threat posed by a different intergalactic race of aliens, we know it’s serious.

Last thing I’ll leave us all with — because it’s something I don’t know that I totally understood until this moment. Black Bolt’s whole deal is that his voice is a destructive force. He’s like an involuntary Black Canary — which explains why I’ve only seen him talk in other dimensions. I love this moment he uses his voice to stop the Outrider. Notice that he’s not shouting at it, so it’s not like the voice is particularly loud, it’s just powerful. I leave it to the comments to discuss what exactly that means. 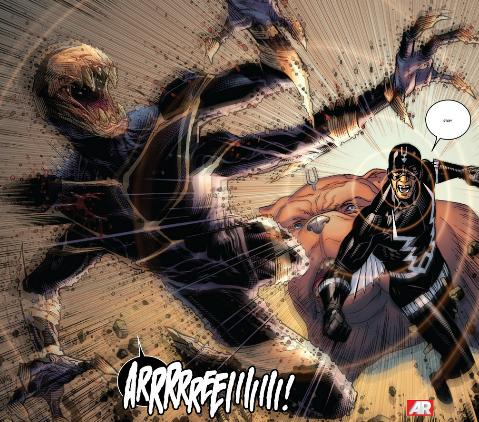