Drew: When Scott (my younger brother) was in college, he inherited hosting duties for an event called “Wine Wednesdays,” where friends would get together to drink wine on (you guessed it) Wednesday evenings. Due to scheduling conflicts, the event had to move its regular meeting time to Tuesdays, and in the interests of alliteration, became known as “Taco Tuesdays” in spite of really just featuring the wine. That same year, he was living in an apartment his friends all called “Bear Snake.” Anyway, in a message to his friends informing him that this week’s Taco Tuesday would be held at Bear Snake, Scott thought it would be funny to replace all of the vowels with the letter “a,” such that the message read, simply: TACA BAAR SNAKA. The fact that that message could possibly convey that his friends should come to his apartment for wine on Tuesday amuses me to this day, but it’s actually quite common for shared knowledge and jargon to pile up in similar ways. Green Lantern Corps 23 achieves something approaching “TACA BAAR SNAKA” impenetrability, digging DEEP into recent Green Lantern history, delivering an issue that may be difficult for all but the most hardcore fans to follow.

The issue picks up with everyone’s rings still de-powered. The Khund are about to execute John and the new recruits when their rings finally flash back to life. The lanterns fight for a bit, but are eventually forced to retreat, much to the chagrin of the Warrior-like Jruk. Meanwhile, Yrra isn’t fairing nearly as well in her pursuit of the Durlans — a wasp burrows through her brains, and she is taken captive. She barely manages to escape, arriving back on Oa just as John et al. are returning. While she recovers, John catches up with Kilowog and Salaak, who are still trying to figure out why their rings are on the fritz. They haven’t come up with anything when a dying Ion emerges from the central lantern, begging for help. Just then, the white entity (with a few other color entities in tow) shows up to whisk Ion back “home,” adding that “it is time to die.”

Right. So I started reading Green Lantern books about two years ago, and I have basically no idea what this means. Indeed, aside from Parallax showing up in Green Lantern 20, I have no familiarity at all with the emotional entities. I can appreciate that the source of all of their power leaving to die would be bad, but any more specific baggage or connections to these characters is entirely lost on me.

Still, it’s clear to me that the entities Poochie-ing out on us like this is meant to comment on the departure of Geoff Johns and company from the Green Lantern universe. I mean, the giant, all-powerful beings behind all of the mythology are moving on to greener pastures — I couldn’t really think of a more apt analogy. It’s a little unfortunate that the first few issues after Johns’ departure are basically devoted to setting up addressing his absence — especially given how exhausted we might be of Green Lantern crossover events at this point — but it does lend this first arc a bit of reflected gravitas.

Intriguingly, while much of the end of this issue seems mired in Green Lantern history, the first half is extremely ingratiating to new readers. Indeed, this is the best introduction to the Green Lantern Corps I’ve seen in my two years reading this series. Writer Val Jensen reveals telling details about each of the new recruits without ever feeling expository. Feska is motivated to action in order to see her children again, Jruk is an honor-obsessed warrior-type, and quiet Maro seems to have a violent edge. That last detail is particularly effective, as it basically flies in the face of what we’ve already learned about this character. 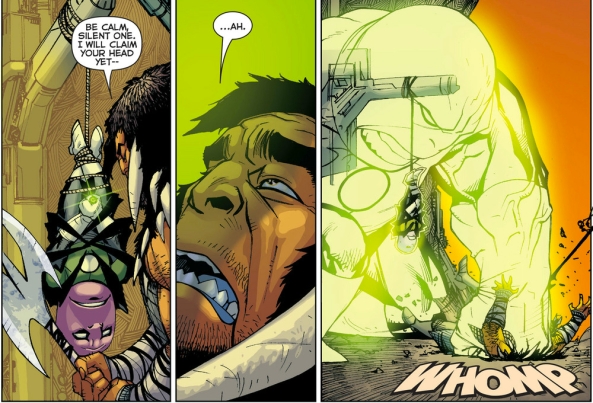 As a relative n00b to the Green Lantern universe, I’m a bit torn. The promise of a team of characters I actually care about (and deployed with more finesse than most team series) is enticing, but the thought of continuing the conversation about Geoff Johns’ contributions to the mythology and how much we’ll miss him is a bit of a turn-off. I might like this corner of DC as soon as it stops being about Geoff Johns, but in the meantime, I’m getting a bit impatient.

I don’t know, Spencer, am I being unfair? I appreciate that there are a lot of fans out there who want this kind of devotion to continuity, but I’ve lost patience for having my head talked over. I’ve put two years into this thing, but I still feel like I’m being left out of the conversation for not having been around longer. I thought for sure the creative change-over would bring me into the loop, but much of this stuff still feels like TAKA BAAR SNAKA.

Spencer: I can’t say you’re being unfair, Drew—if you feel left out of the loop, then you feel left out of the loop—but I do think that this issue tells us everything we need to know about the Entities at the moment: namely, that they power the various Corps and that they’re dying. There’s obviously more to them—knowing the feats Hal, Sinestro, and Kyle have performed while possessed by the Entities shows us exactly how powerful these creatures are and just how significant it is for their power to be fading, for example—but I don’t think these facts are exactly necessary to understand why the Entities dying is a bad thing. It means the end of our protagonists; ‘nuff said.

I love your interpretation that the death of the Entities represents the departure of Geoff Johns, Drew, but I don’t know how right you are about this metaphor being a way to yet again celebrate Johns’ run; I feel like writer Val Jensen’s got something different to say about it. First of all, it has to be a Herculean task to take over the Green Lantern books after Johns’ run. It isn’t an understatement to say that Johns’ tenure may be the most important run the title has ever had, second only to the original issues that established the mythology to begin with. I don’t know how much Green Lantern history y’all know, but besides its first ten to fifteen years of publication (which I’ve been told were surprisingly ahead-of-their-time), Green Lantern has always been a series that has struggled some to figure out just exactly what it’s wanted to do with itself. The Green Lantern/Green Arrow stories altered Hal’s personality and age in ways that the series never really recovered from until Rebirth; instead, the next few decades were spent in a continual cycle of Hal retiring to go soul searching, being replaced by another Earth Lantern, then coming back, then retiring again, over and over and over until the powers that be decided to destroy it all and start over from scratch with Kyle. And Kyle, while he certainly amassed a large and loyal legion of fans, was never really able to win over the Hal Jordan fans the way that DC wanted; eventually DC had Kyle rebuild the Green Lantern Corps, but it wasn’t until Geoff Johns and Green Lantern: Rebirth came along that the title’s popularity started exploding, turning it into the juggernaut it is today.

So not only do the multiple Green Lantern spin-offs being published right now basically owe their very existence to Geoff Johns, but Johns also tied up the entire Green Lantern universe in a nice little ribbon before he took his leave. No matter how much the current writers of the titles may have enjoyed Johns’ run, they have to be feeling overwhelmed and perhaps even a little resentful about what Johns left them to work with and live up to. They have to know that, no matter how well they do or what new direction they take, they’ll be fighting against that comparison to Johns. There’s something Soranik says in this issue that I can’t help but imagine coming straight from the mouth of Val Jensen and the rest of the current Green Lantern bullpen:

Soranik longs to be able to put aside the past and start anew. Who doesn’t, right? But considering everything I’ve already said, this seems to exemplify how the writers must feel about the massive past they inherited when they took on this assignment. So yeah, what if this plot isn’t a celebration of Johns’ run, but a Declaration of Independence from it? What if the Corps finds a new way to power their batteries aside from the Entities, or if, when they repower the Entities, they change all the rules and take things into their own hands, showing that the new writers’ takes are just as valid as the old one’s?! As loathe as I am to see these books fall into another crossover so soon, I’ve got to admit, it’s a very cool, very intriguing idea.

The idea of the past being an obstacle isn’t just limited to the meta-text, of course; the Corps themselves are dealing with the same issues. Much like the writers of the series, John Stewart and the other Lanterns have inherited something they struggle to deal with and make their own—in this case, the Green Lantern Corps itself. 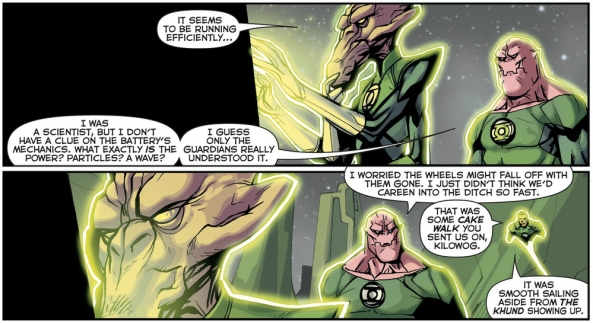 The issues the Corps are dealing with are fascinating to me. Not only do they have to learn how to run the Corps from scratch—without a teacher of any sort—they’re also working to repair the damaged the Guardians’ did to their reputation across the universe—yet another example of the past serving as an enemy. You’ve gotta love that thematic harmony, and the fact that every appearance of the theme leads to an interesting idea to explore is just the icing on the cake.

The first month or two of the post-Johns Green Lantern books were worrisome, but I feel like most of the writers are beginning to find their groove now. Drew, you’re right to praise the characterization of the rookies, and the battle scenes featuring them are a lot of fun. Truthfully, that describes this issue well: fun characters and battle scenes, bright, bold art from Bernard Chang and Marcelo Maiolo, and some intriguing thematic groundwork that captures more and more of my attention the more I contemplate it. Maybe the mythology behind the Entities is a little impenetrable, maybe it’s a little too soon for these new creative teams to be beginning a new crossover (okay, it’s definitely too soon), but I’m still totally eager to find out just what Jensen and his compatriots have to say about this little corner of the universe they’ve inherited.