Patrick: I don’t care how many times we say it around here — it bears repeating: comics are weird. Every time I think I get a handle on the time travel, or space travel, or clones, or moloids or whatever, I discover that the well of weird is deeper than I could ever imagine. Enter: The Impossible Man. Who’s The Impossible Man? Just a shapeshifting alien with nearly unlimited power and a comprehensive knowledge of (and fascination with) Earth popular culture. I did a little rudimentary research, just to familiarize myself with the character, and my favorite piece of trivia about The Impossible Man is that he once talked Galactus out of eating Earth, and then celebrated by going to the Marvel offices and demanding that Stan Lee give him is own solo series. It is in that spirit that FF 11 introduces his son.

Just as Ant-Man, She-Hulk, Medusa and Ms. Thing are about to head out into time and space to locate the Fantastic Four, their ship is POP!ed away to a place that — initially anyway — looks like the top of the Baxter Building in New York. But the rubbery nature of this reality quickly reveals itself to be an illusion created by The Impossible Man. Turns out, The Impossible Man has a son that is proving to be far too Possible for his liking, and he’d appreciate it if the FF could find him a spot at their school. They agree to spend a few minutes with Adolf, the Impossible Boy, to try to talk him in to moving to New York with them. Adolf freaks out — not only does New York not sound like fun to him, the very idea of change and confronting his true nature terrifies him. Medusa is able to convince him that that’s totally the kind of stuff that they work on in the FF, and our gang has successfully recruited a new student.

Back at the f’real Baxter Building, it looks like they’ve also recruited a new teacher and a new stow-away (to the extent one does stow away in a non-moving structure). The alien shapeshifter that the Fantastic Four met as Julius Caesar now appears to be content to just be Julius Caesar, and has started teaching classes to the kids. But the more interesting development comes when Maximus the Mad — recently freed from his prison in Atillan — runs into Caesar in the kitchen. Rather than get into a punchy-fight, they bond over their shared affection for conquering worlds.

There are a lot of strange conflicting points of morality in this issue, and for every troubling aspect of the story, there’s a lighthearted counterpoint. The end of the issue should be pretty dark — in fact, it is pretty dark — but the meeting of a frustrated world conqueror and Maximus the Mad is undercut by some inspired silliness. Even in that moment that they meet, Maximus refers to the kids that freed him as his “idiot nephew and his pets.” He also has to describe what exactly animal crackers and a juice box are – I guess that’s not too common of a snack on Atillan. Earlier in the issue, we see that Max has been hiding out in a storage closet, evidently meditating and reading old issues of Daredevil. 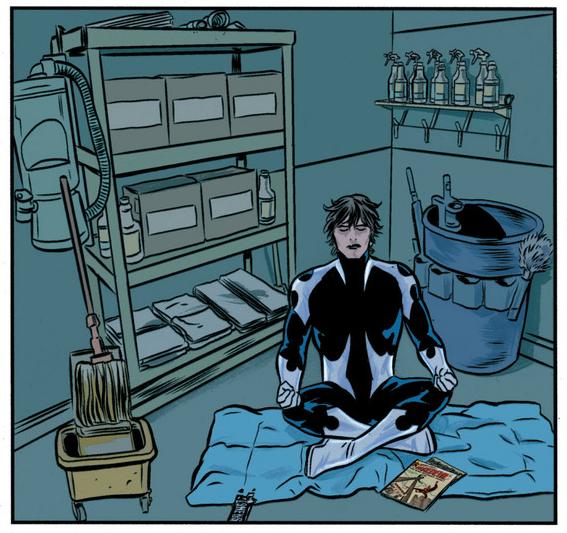 I love it! Also, what is that, a Hershey bar on the ground? I love seeing one of the Inhumans reduced to this quiet indignity. Even Max’s escape plan, which involves wearing one Hall Monitor Robot to trick another, is hilarious (but sorta horrifying if you think about it too much). Also, least we forget, “Hall Monitor Robot” is a delightfully silly concept in and of itself.

Mike Allred pulls off these joke with such a straight face – there’s no point where anything but the sternest look graces Maximus’ countenance. But the cute details thrown in by both Allred and Matt Fraction soften the character immensely. The same is true of Julius Caesar, who — even while helping children plot Dr. Doom’s murder — presents us with the best visual gag in the issue.

I know I’m hammering this point home, but the message is one that carries over to the story about Adolf, The Impossible Boy. Medusa is able to get the boy to admit that sometimes he hates himself and that everything scares him. Everything about this issue suggests that the scary things really aren’t so scary if you spend a little time getting to know them. The adults start their conversation with Adolf by gracelessly making this point — they list off everything that would be great about living in New York City, but it’s overwhelming to the little guy. What Medusa is able to offer him is a safe introduction to the world, so he can experience it and find for himself why all those things that freak him out are actually totally charming and fun.

Shelby – you sent me an email right after you read this issue, proclaiming it to be too charming to wait until Friday to discuss. Well, have at it! Did you have to do a little extra work to understand The Impossible Man, or did you just go in blind, unafraid of being confused, and find your own reasons to love the character?

Shelby: I went into it blind. After I saw that he was a building, then a mailbox, I figured I had a solid enough grasp of his deal. As much as I like the implications behind Caesar and Maximus meeting up to chat about conquering, it was Medusa’s conversation with Adolf that prompted my email. The team’s conversation with Adolf, his response, it’s all so…normal. Fraction and Allred never let us forget that, despite the superhero nature of all parties involved, that we are dealing with children who are students and adults who are teachers. I know that Adolf’s normal, childhood anxieties are what make his parents so concerned for him (not because he has anxiety, but because it’s so normal), but I love that this boy who can bend and twist reality to his desires has the same worries I had as a kid.

I also really like to see Medusa redeemed a little bit. She took a lot of flack last issue for allowing herself to be compromised and putting the children in danger. A lot of that flack was from herself; to her, her inattention was unconscionable, and her litany of her jobs here really drives home the importance she places in her responsibilities to these children. It adds a lot of depth to her character; it would be very easy to paint her simply as the arrogant royal who is convinced she is better than everyone else around her. Fraction has shown he wants more from this team, so he has written her with that royal arrogance, but also a great deal of kindness and care for those around her. She’s flawed, but able to recognize her flaws, admit to them, and try to move on from them. Once again, Fraction shows a remarkable knack for highlighting the human nature of these super-humans. The Impossible Man is going to be disappointed when he discovers how truly normal the members of FF can be.