Patrick: A+X prides itself of being a pick-up and read series – a zero-cost entry point for anyone looking to have some fun with the Marvel characters. As such, there’s no nonsense that’s too out of line for these stories – you want Beast and Spider-Man to travel to a post-apocalyptic future? No problem! The carefree nature of these stories is compounded by the fact that there are two in every issue – it’s not just a one-off story, it’s a two-off (or half-off… I guess I’m not totally sure how you’d articulate that). A+X 11 bucks this trend, nestling both of it’s stories between the events of current series. It’s a bold, oddly alienating decision for a series that boasts such inclusiveness.

Patrick: One day, while aimlessly harassing his armorer, Thor touches a demon skull and is transported to Limbo. Oops! Thor, a frequent visitor to worlds foreign and hostile, engages in a diplomatic discourse with the demons, ensuring peace and prosperity between Asgard and Limbo for years to come. Or. He beats the fuck out of the demons with his hammer – whichever sounds more like Thor. Magik appears, and is dismayed by the conflict. She and Thor team up to repel the demons. In the fighting, Thor opens a crater to… some worse level of Limbo, releasing Beetlejuice-esque giant worms. Magik declares the fight lost and spirits them both back to Earth.

I find it exceedingly dull that Thor happens upon this Limbo-skull while just asking around Asgard to see if anyone has seen his buddy Volstagg, The Enormous. Thor’s an immortal god with a history of intergallactic adventuring, why not have him encounter the skull on one of those adventures? As it stands, writer Mike Benson, almost has to do more work to put Thor in a peaceful place at the beginning of this issue. Benson also seems to have a problem writing in that elevated King Jamesian style that befits the Norse God of Thunder. 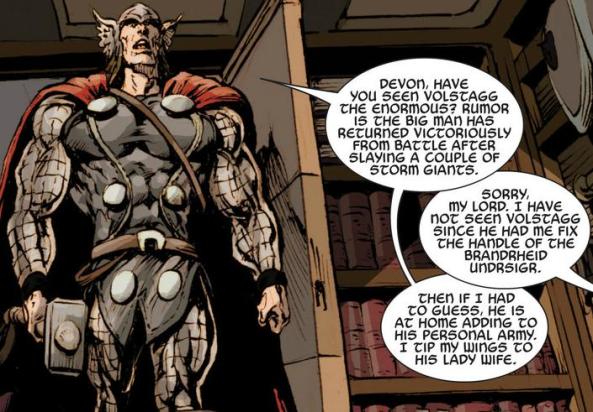 “A couple of Storm Giants?” “Rumor is?” Perhaps I’ve been spoiled by Jason Aaron’s writing on Thor: God of Thunder or Jonathan Hickman’s writing on Avengers, but this version of Thor just doesn’t have that grandiose verbosity I’ve come to expect.

Also, artist Max Texeira has some strange things to say about the human body (or god and mutant bodies, as the case may be). Thor’s muscles are out of control throughout, but poor Magik is straight-up cheesecake – when we’re introduced to her, her shorts are basically disappearing up her prominently-featured ass. I had to go back and check issues of Uncanny X-Men to confirm that this is actually her costume (it is), because I’ve never seen those series-regular artists objectify the character this much.

Taylor, I’m obviously approaching this one with a lot of baggage – you’re not reading any of those series, right? How did this story sit with you?

Taylor: Yeah, I’m not reading either of these titles but I really found this issue pretty weak. I was speaking with Shelby just last night about all the major story lines in the Marvel Universe so I’m pretty up to speed with some of the implications in this issue, but that really has nothing to do with my distaste for these adventures.

What I found off-putting about this issue is just how fucking vapid it is, particularly in the first half. Look, I understand that A+X is a series that prides itself on fluff. In fact, that’s one of the main reasons I’ve actually enjoyed many of these issues; it’s fun to see our favorite heroes in weird situations where the world or their lives aren’t on the line for once. However, this adventure with Thor and Magik seemed especially devoid of substance. Thor gets transported to a nether realm, he meets Magik, they fight for basically no reason, more monsters come and then it ends. Seriously, look at how this story wraps up:

So just to be clear, Thor and Magik don’t even finish their mission (if you could call it that) by the end of their allotted page count.  I mean, “I’ll clean up the god-sized mess you made?” Every story needs a resolution and even though virtually nothing was at stake in this yarn, I would have at least liked to see how it ends. Instead, I’m just stuck with Thor in a field.

Also, maybe we can write-up the weird physical dimensions of both Thor and Magik as poor attempt at humor?

Taylor: The second adventure in this month’s A+X has a little more substance than it’s predecessor. However, it feels like writer Jim Krueger was trying to make an important statement in one of the worst titles to do so.

Cyclops is chasing Malice (a body snatching mutant) through New York for reasons either never explained or just because she’s a bad person. Along the way Scott muses about how he is now considered a villain now all because he killed one of the most beloved characters in comic book history. Malice changes bodies a couple of times and eventually she (gender?) and Cyclops end up on the subway. They fight, then Spiderman (Doc Octofied) shows up. He fights Scott, Malice takes over Cyclops body, then Spider-Man incapacitates him. Later, he somehow extracts Malice’s consciousness from Scott’s body and puts it in a tube. The End.

Whereas Mike Benson went far to light in his portion of this issue, it seems like Krueger tried to get a little to heavy. The result, however, isn’t a story that’s impactful or even substantive. Scott muses on his new life as a villain and it seems like we’re supposed to either empathize with him or reconsider on own views on what it means to be considered bad. While I usually enjoy this type of exploration in my comic books, I found the ideas floating around here to be out of place. As I said earlier, A+X is great because it’s the cotton candy of all of the Marvel titles, which is say, we don’t expect or want grand statements coming from it. Looking for a deep meaning within these pages is akin to major news outlets dissecting Miley Cyrus’ fascination with twerking. While it can be done, don’t we have better things to think about and better theaters in which to have these discussions?

A perfect example of this comes when Spidey lectures Scott a little bit on the merits of being perceived of as a villain and/or being a super hero.

This statement has a bit more meaning coming from a hero who is possessed by a villain, but it suffers from a bit lag that is unwanted in an A+X story. While I find the idea that deception is an important part of being a superhero interesting, I would rather just see Cyclops and Spider-man punching the shit out of Kraven or a giant spider shooting laser-beams out all eight of its eyes.

So I guess what it all comes down to is crafting a fluff narrative is harder than it would first appear. It can’t be too light or too heavy. There’s a nice, just-right porridge tone a writer needs to hit when writing an A+X story and unfortunately neither hit the sweet spot in this issue. Do you agree Patrick? Does knowing more about the extended Marvel universe deepen your appreciation for the second part of this issue or does it bog it down with unnecessary baggage?

Patrick: Yeah, this is totally what I thought was going to happen. I actually did like this second story quite a bit more than the first because these themes are being explored in both Uncanny X-Men and Superior Spider-Man. I had never made the connection between these two characters, but they are both sort of fluid on the whole morality scale, and neither of them can really be held responsible for their previous alignments. Scott killed Xavier, and alienated both the Avengers and the X-Men while possessed by the Phoenix Force. Spider-Man used to be Peter Parker. In the wake of their changes, both are struggling for ways to both be good and be perceived as good, but they are also both willing to go a little darker if that’s what it’s going to take to get the job done.

It’s also just sorta fun to see this story play out, which is does fairly organically. Scott is chasing Malice through New York City, and mid-chase, we see some of Otto’s Spider-Bots on the subway wall.

There’s no convenient magic skull that puts these two characters into conflict, just an encounter consistent with what we know about both of these guys.

The end of the issue is a little shitty: with Scott thanking his lucky stars that Spider-Man isn’t more evil — otherwise he’d find a way to weaponize Malice’s consciousness, so the nonsense goes. It glosses over the more emotionally poignant part of their encounter, that Scott’s allows himself to be taken over by Malice, in the hope that Spider-Man can stop him. Scott’s whole thing deal right now is his inability to control his life: he’s lost his friends, his school, even his powers are all out of wack. And it can all be traced back to giving himself over to the Phoenix Force. Losing control should be the one thing that Scott can’t do, but it is proving to be a superpower more salient than shooting lasers out of his eyes.

I also rather liked the art in this story. There’s not a lot of tricky acting you can pull off when your heroes have their faces obscured the entire time, but there’s a wonderfully sketchy quality to the finished drawings. Ron Lim and Chris Sotomayor almost achieve as Esad Ribic-like texture with their dark, strokey inks. It gives the action sequences just enough slop to make them really exciting.

Plus, Spider-Man punching Cyclops in the mouth! What fun!