Mikyzptlk: “Evil is Relative” was the tagline used to hype the Forever Evil event that has just started to sweep the DCU. Trinity War has succeeded in tearing down the accepted norms of the DCU. Forever Evil is primed to explore what happens when the heroes are nowhere to be found, and the villains are the only ones left to defend the world.

Lex Luthor is a newly freed man. Exonerated of all of his wrong-doings, Lex is more than eager to get back to business, literally. Unfortunately for him, his meeting is interrupted by a power failure affecting all of Metropolis, along with a simple message: “This world is ours.” Meanwhile, the Crime Syndicate of America gets busy releasing the world’s super criminals from their prisons. They gather the villains at the Justice League’s former headquarters to reveal that the League is dead, and that the CSA is now in charge. As Ultraman blocks out the sun, Lex Luthor is left asking a simple question.

As far as events go, this is one hell of a kick-off. I’ve always loved the idea of the Crime Syndicate, and Geoff Johns has gotten off to a great start with the twisted versions of the Justice League. Johns uses them to startling effect in this issue. Oftentimes, when I’m reading villains, I’m usually too busy enjoying their wicked ways to ever be afraid of them like I think I would be if they confronted me in real life. However, with the CSA, Johns actually has me terrified of them. The heroes and villains of the DCU always seem to have a kind of understanding with one another. Generally speaking, each side knows how far the other side is willing to go. The CSA on the other hand? Well, they prove multiple times in issue 1 that they are playing by a different rule book altogether.

Say hello, and goodbye to Monocle, folks. That’s how the CSA deals with descent in the ranks. Johns has utterly convinced me that the Syndicate is a threat worthy of the scope of this story. They are absolutely terrifying, and there is no doubt in my mind that they are capable of crushing the world beneath their collective thumb. So, while it’s clear that the CSA is going to be a worthy opponent, who is going to oppose them? Sure, there are still heroes standing like the Teen Titans, but is their might enough to defeat the Syndicate?

The last page has Lex Luthor stating that, “This is a job for Superman.” What I can’t wait to see, however, is for Lex to realize that this is a job for Luthor. For years, Lex has always seen Superman as a threat to the world. While a lot of his arguments boil down to, “Superman never lets me do what I want,” his most convincing argument has always been that Superman’s presence hinders the potential greatness of humanity. At the same time, Lex has never truly feared Superman, because he’s always known that the Man of Steel would only ever go so far. Now though, with Ultraman and the Syndicate on the scene, Lex knows that things are different, and he’s afraid. 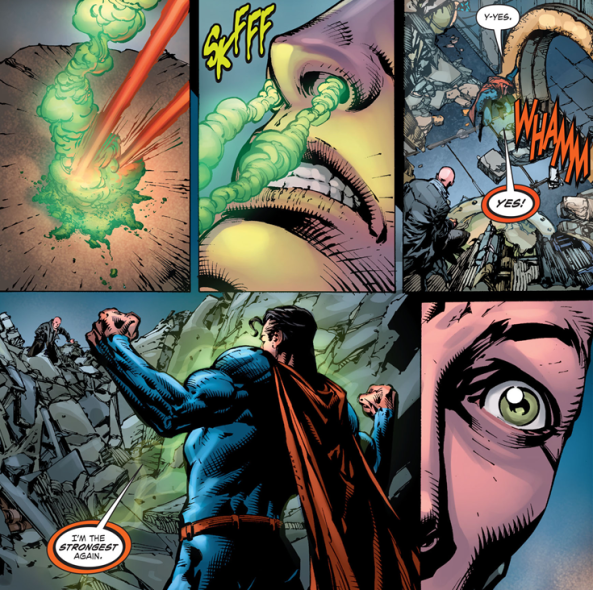 Yes, that’s Ultraman snorting Kryptonite, more importantly though, that is Lex Luthor trembling in fear of a “Superman” gone rogue. At the end of the day, Lex is a villain. However, he also wants the best for humanity, even if his interpretation of “best” is twisted in a Luthor-y sort of way. I’m curious to see where Lex is going to go from here. More than that though, I’m curious to see how Johns is going to use the conceit that “Evil is Relative.” Forever Evil and Villain’s Month are going to give us quite a bit of facetime with the dastardly foes of the DCU, but what I’m hoping to get more than anything else is a deeper examination of the concepts of good and evil in a comic book world.

What do you think Patrick? Was Forever Evil a good start to the exploration of those concepts, or are you expecting something different? There were a lot of villains in this book, did you feel overloaded at all, or did Johns handle them with aplomb? Lastly, what did you think of how Dick Grayson was treated in this issue? That can’t be good. Although, I guess that depends on who you ask.

Patrick: No hero wants to have their secret identity blown, but given the circumstances, this is like the least traumatic thing that happens to Dick in this issue. The world of Forever Evil is fucked in a way I wasn’t totally prepared for. I’m sure we’re going to mention this a lot in the coming weeks, but it is remarkable how thoroughly the world went to shit without superheroes. There’s no power (except when Grid wants you to have power so you can watch Nightwing’s televised unmasking), no heroes, no jails, seemingly no law or order of any kind. So like, does it really matter if Dick has to fight them as Dick Grayson or as Nightwing? I mean, who are they going to target now that they know who he is? Barbara Gordon? Tim Drake? Other heroes they were already going to target anyway?

Mik, I agree with you that Johns established a set of villains that are genuinely terrifying, but I wonder what the costs of such baddies is. There are — as you mentioned — just a ton a villains in this issue, and I wouldn’t necessarily say that I feel overloaded, but I am having flashbacks to those overpopulated issues of Justice League. The only difference here is that I have far less affinity for the assembled cast coming in. There are a lot of little character beats throughout the issue that all hit one fundamental character traits of DC’s vast stable of villains, but the scenes are cobbled together in such a way that these moments seem arbitrary, as though checked off a list as Johns achieved them. Sometimes it’s cute – like how Black Manta proudly claims Aquaman’s trident (like he did anything to earn it). But more often than not, these character moments are weird and forced. Why, for example, do Two-Face and Riddler use the phrases “I’m of two minds” and “riddle me this” (respectively) in their one conversation together? Because it’s the easiest way to write those characters without having to create a morally ambiguous situation left up to chance or craft a riddle – that’s why.

I think this bothers me most where the Crime Syndicate is concerned. I don’t know these guys, but I am always happy to learn about alternate versions of DC’s big heroes. They are all comically opposite to their Earth-0 counterparts – to the point of absurdity. Power Ring (oh, lord, Power Ring) is a cowardly character. Naturally. He’s the opposite of Green Lantern, who we all know has the power to overcome great fear. I assume the power ring selected this guy by saying “You have the ability to give in to any fear… or social anxiety… basically anything can make you uncomfortable.” Why would a ring select a bearer based on cowardice? But even granting that totally ridiculous premise, the execution is in label only: the character never acts as though he’s scared. Sure he stutters a few times, but that’s only to pay lip service to a quality listed on the character’s stat sheet – he’s still standing bravely along side his Crime Syndicate brothers.

I guess all of my complaints stem from the same issue: I don’t really know what to hang on to in this story. The issue’s early focus of Luthor was promising but that melted away the second Johns realized he had so many fun plotty toys to play with. I’m sorta reminded of the first issue of Age of Ultron, which was able to keep its center by focusing pretty tightly on Hawkeye and Spider-Man. The issue delivered a ton of information about life in the aftermath of the robot invasion, but there was a single through-line about survival and friendship and hopelessness. Forever Evil 1 isn’t a story so much as it is disconnected scenes about the CSA taking over the world.

Even that big final moment isn’t born out of conflict or anything like that. Ultraman moves the moon to block the sun because he’s annoyed that the sun weakens him. That’s it. No one is even aware that’s a possibility until it happens. The closest thing to a character-driven plot point in this issue is that Ultraman assembles a meeting of the supervillains, and that’s so boring, I just yawned while coming up with a joke about how boring it is. They’re administrative villains, conquering worlds because… well, I guess just because that’s what they do and Earth-0 is the next one on the list.

David Finch’s art isn’t exactly a joy to behold either. For whatever reason, he routinely draws Nightwing poorly – one panel he’s barrel-chested, the next, his neck is two feet long. And the less said about this panel of Barbara Gordon, the better. 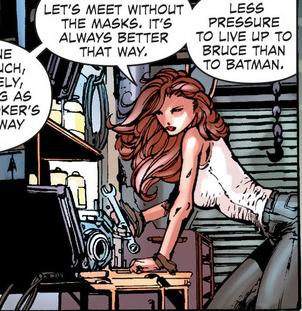 Oh, and here’s my last complaint — then I’ll promise I’ll stop shitting in your sandwich — the Justice League is dead? I read Justice League 23, and I can tell you that I didn’t see any of those characters die. But there’s the cape, there’s the trident, there’s the golden lariat. Is Johns just lying to us? What’s the fun in telling us a lie we don’t believe?