Drew: Why do we like Bizarro Superman? Is it his goofiness? The absurdity of the premise? For me, I think part of the appeal of Bizarro stories has always been the way they reveal Superman’s compassion for even his exact opposite. Then again, I also just love a good backwards-joke and sentences that begin with “me am.” Whatever it is that draws us to Bizarro — and might make us pick up an issue with his name on the cover — Sholly Fisch willfully avoids in Superman 23.1. We may have expected a story about a goofy, unintentionally dangerous oaf, but instead, Fisch seems content to offer us one about a hyper-serious, willfully antagonistic genius. What we get is so perfectly the opposite of what a Bizarro story should be, it almost achieves a kind of fevered meta-genius — a Bizarro story of Bizarro stories — but it’s simply not good enough to deserve any kind of benefit of the doubt. At least, not beyond how fitting it is that it features a totally senseless monster exploding into a pile of messy goo.

Other than a strange opening sequence that serves no apparent purpose other than introducing ideas about opposites it never delivers on, the issue is told entirely from Luthor’s perspective. A handy flashback reminds us that Luthor managed to collect a sample of Superman’s blood way back in Action Comics 2. Of course, Luthor has genetic engineering plans for that Kryptonian DNA, and is ready for his first test run. Also of course, the plan goes horribly awry. Bizarro time? NOPE. The monster created by Luthor is decidedly not Bizarro, and is also dispatched within a few pages. Hubristic as ever, Luthor vows that his next try will go much better (oh, and will probably actually be Bizarro).

Obviously, I’m peeved at the complete absence of Bizarro in this issue. I’ve never been a fan of retellings of origin stories, precisely because they favor going over well-worn story beats instead of having the character actually doing the things that make us like them, but I think this is the first origin story I’ve ever seen that features neither the character as we know him nor the origin of that character.  It’s related to Bizarro in the worst way possible (“Here’s a shitty explanation for how and why he looks and acts the way he does”), and related to Luthor in the dumbest way possible (“His mistakes make him try harder. Also, here’s that time where he accidentally put salt in his coffee”). Failing any kind of character purpose, this story simply explains why there might be a tank in Luthor’s lab that contains Bizarro, something that would have more imaginatively been explained away as a “failed experiment” whenever that tank finally opens.

Unfortunately, this issue is overflowing with similarly hyper-redundencies (things that have not only been said before, but actually never need to be said under any circumstances). Take, for example, this handy exchange, here for no other reason than to remind us that Lex Luthor might not be Superman’s biggest fan. 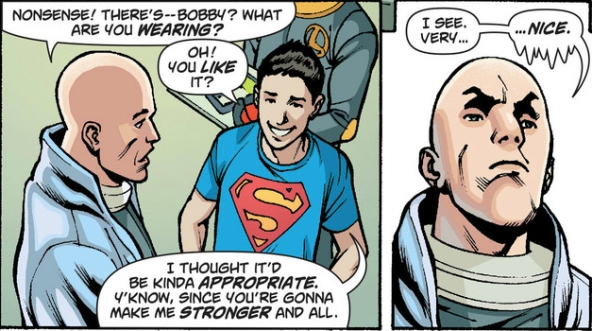 Beyond being unnecessary here, this exchange is unnecessary in every Superman story, ever. Hey! Did I mention that Lex Luthor doesn’t like Superman?

I do have to hand it to Fisch for being so committed to Luthor’s voice. Indeed, Luthor is so convincing in his confidence that he’ll find a solution to his rampaging monster problem that the scene never picks up even an ounce of tension.

I never fear, nor suspect, nor care that something bad might happen to Luthor. It’s a masterclass of boredom.

I dislike everything about this issue, which again, might come off as intentional if I was feeling a bit more charitable (but because of, you know, disliking everything about it, I’m not). I’ll admit to never really being able to get over the utter lack of Bizarro, but I think I could have if the story was actually worth reading. I don’t know, Patrick — am I missing something redeeming here?

Patrick: Well, this is fascinating. I didn’t find much to enjoy in this issue — it’s basically the least exciting part of the Frankenstein story — but I don’t think I take it quite so personally. The issue patently doesn’t deliver on the promise of “Bizarro,” and the Bizarro that it suggests isn’t the goofy, backwards-Superman concept that that Drew and I have a fondness for. I think part of what Drew might be responding to is the really unfortunate idea that the impossibly silly concept has been replaced with “superman clone.” Which, incidentally, is kind of what happened to Superboy too… Anyway, it’s certainly a sad day if this issue proves that there is no such thing as Bizarro world – that’s the kind of inspired nonsense that thrives in comics, and so rarely works in other media. Can you imagine how fun a throw-back Bizarro story written by Matt Fraction would be? Or anyone interested in telling a fun story? Unfortunately, “fun” is not the order of the day at DC, so we get this thing instead.

But what I find so interesting about Drew’s reaction is that we always always always try to approach comics with a fresh set of eyes – none of our preconceived ideas about characters or concepts are going to sour us on a good idea that just so happens to be new. You know how some people have taken one look at Batman: Zero Year and determined that “there’s nothing new here?” It’s that kind of thing we want to avoid. Whatever we may love and value about the Bizarro concept, we shouldn’t have a knee-jerk reaction of “this is terrible because it’s not what I expected.”

Holding the issue up as its own piece of literature isn’t very rewarding either. For one thing Luthor is motivated to make a humanish Superman clone by events that take place outside of this issue, and he obtains the Kryptonian DNA similarly outside the issue. So at the start of the issue, he has the means and motivation to do something and then he does it. Wooooo. Not a particularly dramatic development.

If there’s one thing I do like about this issue, it’s how well prepared Luthor is for an out-of-control Superman. By his own reckoning, the Kryptonite gun “would have decimated a true Krryptonian.” Decimated? Sounds like you’ve got your Superman deterrent already, huh, Lex? But the next two examples — those of Superheated Plasma Drones and Transdimensional Quantum Hounds — are ridiculous in just the right way. Lex’ final solution is fine and all, but I would have liked to see him exhaust more anti-Superman measures. If there were some more clever and/or convoluted methods of containing Bizarro-A, we could have learned something about Luthor’s intelligence. But in the end, we’re left to take Luthor’s word for just how smart he is.

I mean, whatever. The whole issue seems like build-up to the following joke: 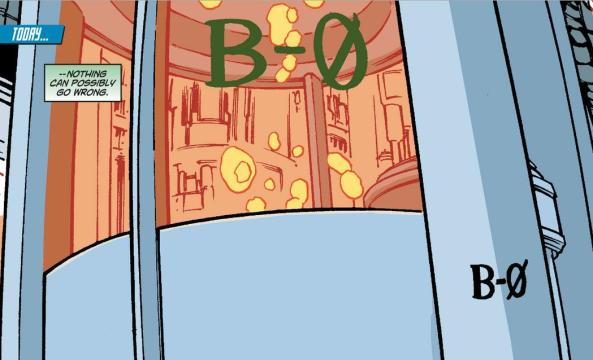