Drew: Hulk is indestructible. It’s a fact so indisputable, Marvel went ahead and put it right in the title of the series. That is to say, there isn’t much tension to be garnered from the question of whether something might destroy him. Like Gloria Gaynor, Hulk will survive. He’ll also likely smash whatever tries to destroy him. There aren’t really going to be any surprises on his part, so much of the interest in the failed attempt to destroy/successful attempt to get smashed must come from the other side of the equation — the one attempting to harm the Hulk. Fortunately, writer Mark Waid is no slouch when it comes to coming up with interesting villains for Hulk to face.

This issue finds a time-displaced Hulk (with Banner-Bot in tow) in Camelot — er, just outside of Camelot, as a Chronarchist has exiled King Arthur and his knights from the castle. Merlin is able to explain this to Banner-Bot, but Hulk is in full-on rampage mode, making him decidedly more difficult to reason with. Merlin and Banner-Bot decided to use Hulk’s rampage to their advantage, teleporting them all to Camelot, where Hulk can make short work of the castle’s defenses. This forces a battle between the knights of the round table and the Chronarchist’s cobbled-through-time meta army, but the real fight is between Hulk and the Chronarchist himself. The Chronarchist throws every trick he has at Hulk, but, you know INDESTRUCTIBLE, so Hulk wins (with an assist from the Black Knight, a renown champion of the round table and/or a Martin Lawrence vehicle), sending the Chronarchist and his army back into the time stream. That seems like a wrap until Hulk speaks in a complete sentence, suggesting that the third (and final) Chronarchist is altering Hulk’s own history.

That is quite the twist, one that runs the risk of completely stealing the show. These jaunts through time have been fun, but have been decidedly frivolous. Seeing Hulk dispatch another Chronarchist here felt like a bit of a rehash, but it feels especially pointless when compared to a story where the stakes will actually effect Banner in some way. I enjoyed this issue as goofy fun — the way I tend to like my Hulk stories — until that reveal pulled the rug out from under me, creating all kinds of expectations for things I didn’t even know I wanted. Sure, it gets me excited for next month, but it also makes the frivolity I didn’t otherwise mind here seem kind of silly.

My excitement for Indestructible Hulk 14 aside, this issue certainly layers on the ridiculous comic book ideas. I mentioned the Chronarchist’s insane time-displaced army, but no description could ever really do it justice.

You’ve got spartans rubbing elbows with samurai, tanks alongside mounted knights, and while you might see some parallels with Ares’ “all of them” army from Wonder Woman 23, I’d gladly draw your attention to the monsters, robots, and that dude in the Halo armor — this army is drawing from armies past AND future. It’s a zany concept, but one we actually spend relatively little time with, since there’s so many other goofy ideas to get to.

One of these is the Ebony Blade, the indestructible enchanted sword the Black Knight wields, said to cut through anything. Before all the Marvel historians jump down my throat, let me clarify that I understand that neither the Black Knight nor the Ebony Blade are Waid’s invention. I do, however, think it’s a stroke of genius to put an indestructible weapon in Hulk’s hands. Moreover, I think it’s genius to put the “cut through anything” to the test by having Hulk literally slice through time. It’s an absurd, but deliciously comic-booky idea, and Waid manages to have it make far more sense than I could ever hope to explain.

Ethan, I’m excited to hear your thoughts on this issue. Were you able to enjoy the goofy fun, or were you as distracted by your anticipation over the next issue as I was? I mean, wouldn’t an erudite Hulk be a fun thing to explore? Oh, and most importantly, what did you think of Merlin’s wizard hat?

Ethan: I figure Merlin’s hat is a bit of a bellwether for how well things are going at any given moment. Basically the same thing as most other character’s lower lip: our heroes can get thrown through a few walls without so much as mussing up their hair, but when they’re really getting hammered, they might get a bloody lip. In the panel you included above, Drew, Merlin is rocking his magic Hadouken, feeling pretty good, and then (watch the hat) –

When the hat comes off, you know the battle isn’t going the way Merlin had planned.

I’m actually glad you mentioned Merlin though, because this issue brings up an interesting, not-quite rock-paper-scissors relationship among time, magic, and the Hulk. We see that magic does have some affect on the green guy, in that it can move him far away, but that just delays the inevitable. Time – or some kind of causality quirk that the chronarchist has access too – definitely trumps magic, since Valdar Ahd is able to loop Merlin’s blast of magic back onto the caster. Time vs. Hulk? Again, it’s not so clear-cut: Valdar is able to slow Hulk down, but he clearly meant to freeze Hulk cold. Hulk’s superlative nature apparently lets him begin to overpower the time-stop, and I’m really curious whether or not Hulk would have been able to “break out” of it if things had continued. Instead, Valdar gets the hint and changes it up, giving up on the Pause button to try the Fast Forward: 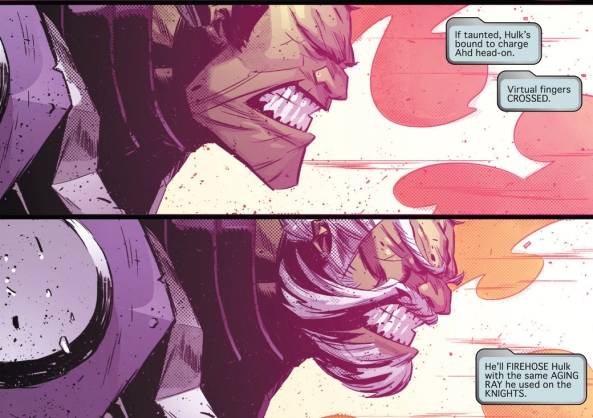 This definitely seems to be a better strategy, at least if you’re trying to help the Hulk grow out a sick Fu Manchu ‘stache. As for killing him, not so much. Robo-Banner seems to attribute the non-lethal outcome to the Hulk’s chronal armor, but again, I wonder if it’s really just that easy to turn Hulk into a pile of green dust. None of this addresses the total weirdness that you have to accept to believe that the time-traveling bad guys have guns that are point-and-shoot means of completely disregarding the excessively regular, linear, unchanging nature of time. We’re already accepting the fact that people can bounce through the “timestream” like pinballs anyway, so maybe this isn’t such a big suspensions of disbelief, but I can’t say that the entire idea of a time-gun doesn’t irk me a little. While I think the implementation of the idea is a little more stylishly done with the Uriel Worthington’s manipulation of “artificial time” in some other Marvel titles right now, I still find it pretty silly. Thankfully, it doesn’t really matter, because the point of the time-gun existing at all in this title is to serve as another example of a big, scary thing that STILL can’t kill the Hulk. Not science, not magic, not the flippin’ laws of physics themselves; Hulk is indestructible no matter what means of destruction you want to throw at him.

To answer your first question, Drew, I’m definitely looking forward to seeing what kind of fun the next issue holds, given the specter of the well spoken Hulk we got at the end of this one. In the alternate version of reality that occurs when the third chronarchist screws with the gamma bomb experiment / accident that created the Hulk, does the Hulk keep all of his indestructibility AND get to speak in real English? Or did the chronarchist prevent the accident from happening – is the Hulk’s acquisition of language going to be accompanied by a weakening of his awesome powers as Hulk reverts to plain old Banner? And while I think it would be a really neat character development for Hulk to permanently gain the power of speech (even at the cost of some of his powers to smash), sadly, I don’t think it’s likely. Hank McCoy (Beast) kind of has the bulked-up scientist thing pretty well covered, and too much of Hulk-ness has to do with the Jekyll / Hyde duality, so as fun as the next issue will be, I predict it’s only going to be a brief foray into the higher thoughts of the Hulk.