Spencer: For better or for worse, the New 52 created the perfect opportunity for DC to update and reboot its characters. The changes that really worked were the changes that solved a major problem with the character or provided them with a fun new direction; the rest just seemed pointless at best. The changes to Lobo’s character made in Justice League 23.2: Lobo definitely fall into that “pointless” category, but that isn’t all that’s wrong with it; its biggest issue is that the changes are made in a manner that seem to punish Lobo’s fans for having ever been invested in the character in the first place.

Lobo’s an intergalactic bounty hunter; violent and immensely powerful, Lobo is only concerned with getting paid and getting his next job. That job comes from Rhialla, who offers Lobo a gig hauling some cargo through a dangerous stretch of space in return for some information he’s been looking for; turns out the cargo is actually a group of aliens who are being harvested for their valuable bones. They think Lobo is there to rescue them, but without even flinching he hands them over to his employer. In return Lobo receives the information he desired:

So yeah, for those of you without a program, the “imposter” Lobo is actually the original, pre-reboot Lobo; in effect, what DC and what writer Marguerite Bennett are saying is, “Hey, you know that Lobo character you guys love? Yeah, turns out he’s a fake. This guy is the real Lobo. He’s going to take down the Lobo you know, and you gotta deal with it.” I don’t understand what led to this decision. It’s pointless, it’s patronizing, and it’s needlessly inflammatory. What is DC thinking?!

I’m guessing this twist was supposed to be edgy or something—which I suppose is appropriate considering this is a Lobo story—but this kind of move only works when the story attached is so excellent that the offending moment can be glossed over. It’s probably no surprise, but this story just isn’t good enough to pull it off.

Lobo works best as a character when he isn’t taken seriously. After all, Lobo is basically a highlight reel of 90’s-era comics’ worst indulgences—ultra-violence, regeneration that basically makes him unbeatable, needlessly edgy and provocative—and as an art form, comics rallied against those kinds of traits long ago. The best way to make Lobo enjoyable is to turn those traits up to 11, basically allowing him to become a parody of himself; we can laugh at the character while still getting a little guilty pleasure out of it. Unfortunately, this issue abandons that take almost completely. There’s once or twice where Bennett allows Lobo to talk wise or make a silly joke—I loved the running gag about using his bounty’s head as a hood ornament—but besides those rare moments, both the issue and Lobo himself are painfully humorless.

It’s hard to latch onto this new Lobo as a character at all, actually. He’s so “cool” that he barely shows emotions at all; he smiles when he kills, is bored at all other times, and that’s his entire range. Unflappability can be a great trait, but when it’s all a character has going for him than he’s going to be a complete cipher. There’s nothing to enjoy about this Lobo and nothing to relate to.

I’m almost wondering if we’re supposed to revile him. The scene where Lobo discovers what his “cargo” actually is and allows them to be taken to their death anyway was painful to get through. I don’t necessarily think that the “old” Lobo would have tried to save them either, but it doesn’t do the “new” Lobo any favors putting him in this situation when he’s already been introduced in such an off-putting way. I realize that it’s Villains Month, but that doesn’t mean the featured villains can’t be interesting, nuanced, entertaining, or even sympathetic. This new Lobo isn’t any of those things. He’s an evil, intergalactic Fonzie, only without any of Fonz’s patented shark-jumping charm.

Perhaps the biggest strike against this issue is that its actual merits (or lack thereof) are almost impossible to discern through the editorial quagmire it got caught up in. I think editors often get a bad rap (and no credit for the good things they do), but it’s impossible to look at this issue and not see a dozen poorly planned decisions that led to this issue’s mismatched cover and poorly introduced replacement character. I have no idea if Bennett could have done more with the character if given more freedom, but I’m disappointed she didn’t at least get the chance.

Patrick, I don’t think we’ve ever talked Lobo before; do you have any prior experience with the character, or is this your first foray into the world of the Main Man? Did your experiences—or lack thereof—with this character color the way you perceived the new Lobo? Could you find anything appealing or interesting about the character that I overlooked, or were you equally turned off?

While you answer those questions, I’m gonna go watch some of the DCAU’s Robert Barone-voiced Lobo to wash the taste of this new one out of my mouth:

Patrick: I have a little experience with Pre-Flashpoint Lobo – he was stomping around the universe, herding emotional entities in the wake of Blackest Night. I didn’t love the character then — under the Pen of Geoff Johns — and I didn’t much care for him during Rob Liefeld’s run on Deathstroke (but then again: duh). I get that he was invented as a parody of 90s comic excesses – he’s not played with any subtly: Lobo is an outer space biker who rides around the cold vacuum of space without sleeves.

I guess I have a hard time separating parodies of 90s nonsense with the actual 90s nonsense – especially in comics. Like, how do you exaggerate the following for comedic effect? 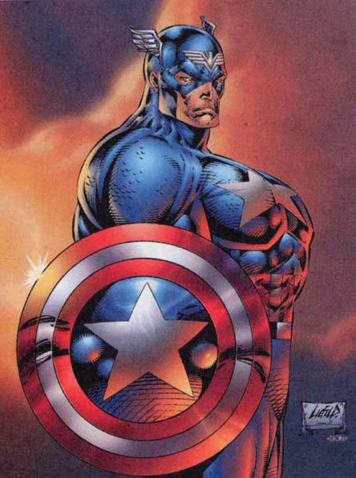 Which is to say that the concept you are championing never worked for me. And while I don’t necessarily feel like the new Lobo concept particularly works for me either, the fact that this new character is essentially an amalgamation of 00s-style comic book characters (complete with bullshit-retcon-twist) is just too fun to pan outright. Further, I think the beauty of the Lobo / Lobo relationship is that this issue actually leaves the previous version of the character completely in tact. You can’t say the same for Wally or Steph or Cassie. It’s not even as though the old Lobo is of no consequence to the new Lobo, it’s actually quite the opposite, as pretty boy has been working for years to track down the big guy.

Spencer, I don’t disagree that there’s not much to love about the narrative or the character, but that sells short the fundamentally ballsy idea that Marguerite Bennett puts forth. The first two lines of voice over in this issue are:

You think you know me. Screw you.

And then the retconned Lobo behaves like a humorless jackass while seemingly defying every characteristic of the original (except his cruelty, of course). In this issue, Lobo is representative of every reboot and every fashionable redesign – of course he’s unpleasant. Bennett’s not having fun at our expense, she’s having fun at the expense of the suits that make the decisions – those that say “sorry” and mumble “not sorry” under their breath. It’s such a bold idea, I wish there was a fun story supporting it. As an experiment, as a statement against DC’s editorial practices, I think this is a smart, brave issue.

I also find the the dialogue to be particular well-written. Lobo may be an unrepentant fucker, unworthy of our affection, but he is a man of few words, warrior-like in his brevity. When the other characters get a chance to speak, they’re actually remarkably eloquent. The MC in the first scene uses the words “ebullient” and “gloaming” – both of which are pretty good GRE words (meaning “joyous” and “dusk” respectively). There was a second I thought Bennett was employing bullshit alien slang — something I’m on record as hating — but was pleasantly surprised to discover that “gloaming” is a real word. Something new, every day.

Actually, there’s shocking little copy in this issue from any source and Ben Oliver and Cliff Richards are left to convey much of Lobo’s brutality through their art. Their work is never so balletic as when Lobo gracefully slices someone in half — an act that occurs more than once in 20 pages.

Also, while that scene of Lobo sending the slave-people back into their cage (and by extension, to certain doom) was stomach churning to read, it is viscerally rendered by Oliver and Richards. everything from the way the representative prisoner emerges from the bottom of the panel, to Lobo’s two-finger point back into the box perfectly establishing the power dynamic, and the utter shittiness of the merciless bastard we’re following.

So, I don’t know – am I meeting Bennett half-way on this one because I don’t have any affinity for the old version of the character? Probably. Am I excited at the prospect of reading future stories about Lobos duking it out for the title of “Real Lobo?” Not really. But it is hard for me to stay mad at this issue, when it seems to articulate complaints about itself right in the text. I am a sucker for that kind of shit, after all.