Taylor: The encore of a show is always a little awkward. With most shows you attend nowadays an encore is almost expected. Gone are the days of the earned encore, where and artist actually had to earn the audience’s appreciation and rewarded them with a few extra bits of music.  This has been replaced with instances where artists look a trifle bored with an encore, seemingly wishing that they could just retire to their bus or greenroom. The situation has become so problematic that some artists have gone so far as to state they won’t be doing an encore no matter how much the audience claps or yells. It’s hard to determine precisely what brought us to this point, but the fact remains that the encore has become not the exception, but the expected. Given this state of affairs, I was curious to see how the issue 23.3 of the The Justice League: Dial E (part of the Villains month event) would be treated by writer China Mieville. Would this be an artist merely pandering to the crowd or an artist excited by the chance to once again share his art with his fans?

In Littleville, four hooligans have found the E (for evil) Dial. Turns out a small time thug named Tibb has somehow gotten his hands on the dial and plans to use it for nefarious purposes. However, before he gets a chance to use it, Gwen (one of the hooligans) steals it. With her four compatriots she figures out how to use the Dial and as a super villain she robs a few stores. Everything is going swimmingly until Tibb shows up looking for the dial. Turns out he wants the dial back and has the firepower to take it. Al, Gwen’s friend, takes the dial and begins to defend his friends when the police show up. More super villains are dialed and more fights happen and then shit really hits the fan. The mother of all evilness, the Centipede shows up, fights Al for a bit, then nabs the dial. Things look bad until Rescue Jill shows up to knock out the Centipede and take his dial. Game Over man.

If that recap sounds a little schizophrenic it’s because the issue itself shares the same trait. Perhaps the most striking element of this issue is that every page is drawn by a different artist. Every penciler that had the chance to work on Dial H while it was a regular series makes an appearance somewhere in this issue and even Jeff Lemire even lends his artistic talents to the fray. Each artist brings a dramatically different style to the table and the result is an issue that feels at once chaotic but strangely appropriate for this issue. 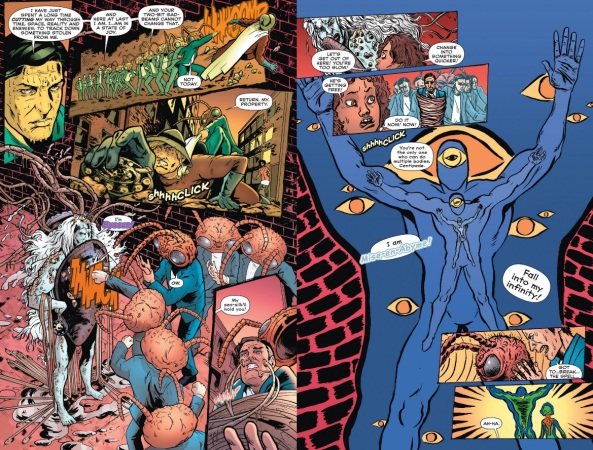 While each page looks different, some more strikingly so than others, the disjointedness matches the tone of the issue. Mieville’s run with Dial H has always bordered on the surreal and with the depiction of events being handled by several different pencilers, the art seems to appropriately mirror the writing for the issue. The reader never quite feels settled in this issue and at times the action becomes a bit confusing because it’s difficult to switch between art styles so rapidly. While some might view this as a drawback of the issue, I see it as a strength. I enjoy that this issue makes me work to understand it and that it leaves me feeling a bit dizzy. I imagine that’s what it’s like to use a dial so instead of feeling disconnected from the action, I feel as embedded in it as ever.

Of course, it’s easy to get lost in this issue when Mieville does his best to give every artist the opportunity to strut their stuff. On virtually every page a new super villain makes his or her appearance and one can only assume Mieville wrote this issue knowing each page would be rendered by the hands of a different artist. For those of us who enjoyed the Dial H series with its plethora of heroes and their unparalleled set of powers, we couldn’t ask for much more. One of the secret pleasures of reading Dial H was the revelation of new heroes and their names, most of which were humorous or exceptionally clever in nature. I’ll always remember the infamous Cock-A-Hoop, but who could forget such bizarre and unique characters like Defenestration Man or the Glimpse? In this issue we are treated to such gems as “Suffer-Kate” and “Decalcomaniac,” and my personal favorite “Baba-Iago.” 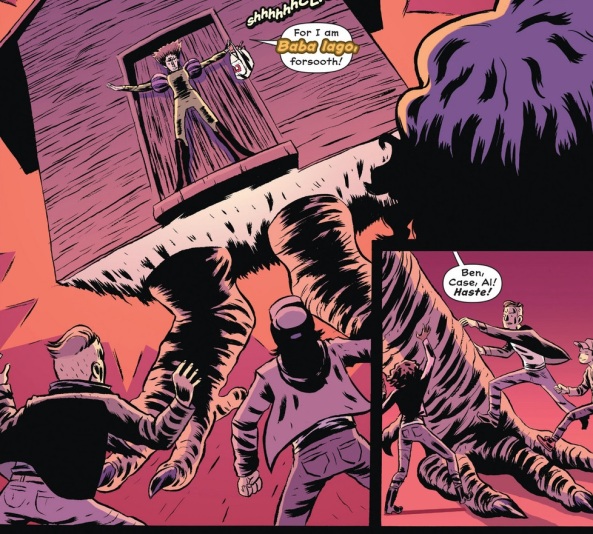 Ultimately I think this is representative of what those of who read Dial H liked so much about the series. While the plot was fun an interesting, the most enjoyable aspect of the series was the imaginative scope of Mieville and his sometimes humorous and sometimes poignant analysis of what makes a super hero. Every time we were introduced to a new hero or villain we had to wonder what their power was, what their story was, and what exactly their name means. It’s a fun little exercise and one that made me more appreciative and aware of the artistry of the comic book genre.

That being said, I think this issue is a great coda of sorts for the Dial H series. It’s an encore that delivers everything we wanted from a Dial H issue such as multiple villains/heroes, but which also seems to be just as much about artists really appreciating enjoying their fans and their product. I couldn’t ask for much more from this issue and find it a suitable addition to Mieville’s run on Dial H. Do you feel the same way, Drew, or do you find the issue to manic? The plot in the issue was a bit thin, but were we really expecting much more from a one-off issue like this?

Drew: Oh, I think this was the perfect encore for Dial H. The goofy, pun-y powers were the first thing I loved about that series, and while I appreciate why the final chapters of the series had to focus a bit more on the mythology behind it all, it felt like they were missing a key element of what made that title special. This is a very welcome last hurrah for whatever superhero ideas Mieville never got to use in the series proper, from Topiary Rex to Wet Blanket. The fact that Centipede is ultimately thwarted by the female counterpart to Nelson’s made-up “Rescue Jack” from issue 4 is just icing on the cake.

I have to admit, the page-by-page stylistic shifts took some getting used to, but once I got into the rhythm of the issue, it actually coheres into a beautiful essay on the medium. Sure, jumping from Jeff Lemire to Frazier Irving to David Lapham can be jarring, but it’s also a fantastic tour of what comics are capable of. It’s easy to spot the stylistic differences between these artists, but just below the surface are some fascinating differences in their storytelling. It’s rare to get this kind of side-by-side comparison outside of maybe an anthology (and even then, 20 different artists is pretty unheard of), and seeing, say, Michelle Farran’s illustration-inspired work in the same volume as Emi Lenox’s cartoonier style is an absolute treat. My favorite page has to be Zak Smith’s freeform depiction of Centipede cycling through power sets:

Eschewing panels, Smith piles all of the images on top of one another, creating a collage of characters that is both striking and purposeful. Bear in mind that Centipede’s abilities allow these things to be happening in rapid succession, or even simultaneously. The choice to eliminate panels emphasizes that confusion of time, creating a visual jumble that also happens to be gorgeous.

Other sequences require a bit more rigidity when it comes to form, but every artist treats the page differently. Most employ somewhere around five panels, but Jock demonstrates how to effectively bring that number down without losing any drama.

Any one of those panels could be split into a shot/reverse-shot, but Jock manages to find the shots that give us the most information. That final panel, with Ayenbite in the background and Nick in the foreground basically functions as two panels, but by clever staging, Jock eliminates that extra step, keeping the shot uninterrupted.

This issue is a fun little study of graphic storytelling and sequential art, Sure, Mieville doesn’t get to flex that plot-writing muscle of his, but his sense of humor gets to share the stage with his collaborators. It’s breezy, frenetic, and maybe a bit confusing, but it’s also a beautiful love letter to the medium. I read plenty of comics that I like, but this is the first in a long while I’m grateful for.