Drew: A reviled leader returns, shocking a land that had long ago moved on. OR A beloved leader returns, rescuing a land that had long ago lost its way. Depending on your political ideology (and location) those statements could equally describe Silvio Berlusconi, Vladimir Putin, Newt Gingrich, or Hillary Clinton. The point is, nobody is the villain in their own story, though they may widely be seen as such by others. It can be hard for people to understand how their political savior is seen by others as pure evil, and it’s exactly that kind of superlative exaggeration that has devolved modern politics into tribal chest-thumping matches. Thor: God of Thunder 13 isn’t quite even-handed enough to confuse anyone about who the villain is, but it does provide a thrilling introduction that has us rooting for that villain…at least until he starts killing babies.

The issue opens on the rescue mission of the exiled king of the Dark Elves, Malekith, from a prison in the realm of the dead. It’s the kind of colorful, heroic mission that you might see the Warriors Three undertaking to rescue Thor. Indeed, the giant spiders and venomous snakes the rescuers face are enough to make any villain seem cute and cuddly by comparison. It’s not until Thor and the Warriors Three confront Malekith that we realize just how villainous he is. Sif makes it clear that Malekith was justly imprisoned for horrific crimes, but by that time, he’s already massacred his own people — apparently for not celebrating his return. Malekith escapes, promising to hunt down every Dark Elf in all nine realms for their betrayal.

By the issue’s end, it’s clear that Malekith is a horrible dude, but writer Jason Aaron pulls a pretty neat trick making us root for him in the first half. Indeed, he even titles the issue “The Great Niffelheim Escape OR The Svartalfheim Massacre,” wearing the narrative’s shifting subjective lens on its sleeve. He wants us to root for Malekith, and frames the escape as the kind of heroic epic we’ve come to expect from Aaron. Of course, that sympathy for the Dark Elves is hard-won; Aaron also goes out of his way to paint these guys as monsters.

They killed that poor wizard for the crime of helping them. Who cares, though? When it comes to giant spider fights, you’re always going to root for whoever isn’t a giant spider.

Of course, we also don’t really know what the stakes are. Sure, Malekith kills one of his rescuers, but only after he’d already been bitten by dozens of venomous snakes. All we really know is that these warriors were willing to brave storming the gates of Hel itself in order to rescue this guy. Of course, as soon as Malekith is free, he sets to eating the raw hearts of every giant spider he can find — there’s something decidedly unsympathetic about eating giant spider hearts raw. Basically, from that moment on, we get a creeping “I’ve made a huge mistake” feeling.

Aaron then grounds us with a celebratory feast in Asgardia, as Thor demands “MORE MEAD!” (I love that, no matter how ambiguous the world around Thor may get, MORE MEAD can center us.) The gods are celebrating the election of Volstagg as Senator. As a newcomer to Thor, I’m entirely unfamiliar with the Warriors Three, but Aaron clearly has a strong sense of Volstagg’s voice, it’d be a shame if he was actually sidelined for Senatorial duties. It’s not entirely clear what this will mean for the Warriors Three (though I suspect Sif’s strong presence throughout the issue may posit her as a logical replacement), but it barely matters — Volstagg suits up with the rest of the gods when word comes of the attack on Svartalfheim.

So it’s a chase! I’m excited for the tour of the nine realms, but more importantly, I’m excited to have someone for Thor to talk to that isn’t another Thor. They say you can judge a man by the company he keeps, and while we’ve seen plenty of Thor in this series, there hasn’t been as many opportunities to see him bouncing off of other characters. What do you think, Shelby? Does the god version of a car chase sound like a good way to get to know these characters?

Shelby: The only way I’ll be disappointed in this high speed chase will be if there are no space sharks.

But seriously, you raise a good point, Drew; this will be our first story wherein Thor has someone who isn’t a past/future version of himself to interact with. I think Aaron was very smart with his first arc; what better way for us to learn about the kind of man Thor is than by introducing him to us in his youth, middle age, and old age? With every adventure Thor goes on, we know who he was and who he will become; this is probably the most comprehensive view of a character we’ve seen yet.

Speaking of a tour of the nine realms, how awesome is this map of Yggdrasil? 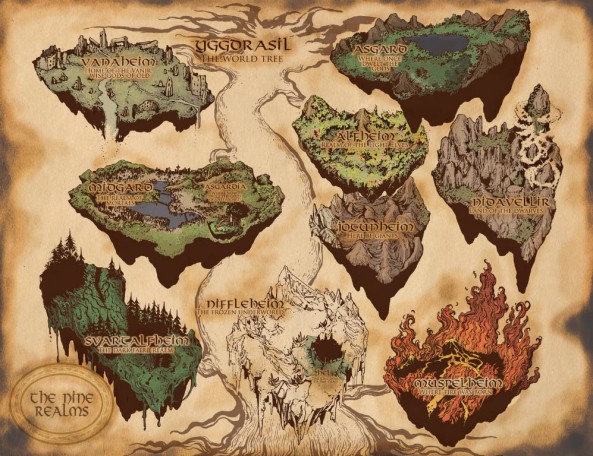 As a big fantasy nerd, there is little else more exciting than finding a map of the land on the inside cover of a new book, so I was thrilled to see this. Ron Garney did a beautiful job rendering this spread: the inky, brushstroke lines of the world tree, the burnt edges of the parchment, that Thor fantasy font, it’s all perfect.

I like the approach Aaron is taking with this title. With Gorr and his godbomb, we learned a lot about Thor. Now, with this wild chase through all the nine realms, we’re going to learn a lot about Thor’s universe. We all know he’s totally in love with Midgard and he’s from Asgard, but as the boy said to the gunslinger, “There are other worlds than these.” Aaron is doing slow, methodical story-building; he gives us a multi-faceted look at our favorite mead-swilling Viking, and now he takes us on a guided tour of the nine realms. I don’t mean “slow” as “without action” (need I remind you again of the space sharks?), I mean “slow” as carefully applied layers. He keeps us interested in the immediate story by making it at times laughably epic, all the while building up a complex and rich character and universe. Get your next drinking horn of mead to go, because I suspect this adventure will last a while.