Patrick: I’m gonna pull back the curtain at Retcon Punch here just a little. We like to invite our friends and family members to write about issues that don’t require a lot of context to understand – anything that seems like it’s going to be elemental and insulated. This way, we can get the perspective of non-comics-readers on a comic book. It’s a valuable perspective to have, and one that’s impossible to recreate within our regular writing and editorial staff. This policy bites us in the ass from time to time. It turns out that the more elemental characters are wrapped up in DC mythology because of their singularly compelling nature. We were bummed when Scarecrow was 20 pages of weird connective tissue and set-up for Arkham War – we thought for sure that our buddy Greg could just write some funny stuff about the scary drawings. That’s selfish though: why should the most interesting characters be relegated to the least interested writers? Without further ado: Bane.

The issue opens on Bane in the workout room at Santa Prisca. And even though there are weights and medicine balls and shit in there, all of the exercising takes the form of sparring… if you can call it that. Bane mostly bullies his henchmen for a while before murdering them. It honestly doesn’t even look like it’s much of a workout for him. The daughter of one of these murdered henchmen thanks Bane for freeing her from her abusive father. Bane thanks her the only way he knows how: 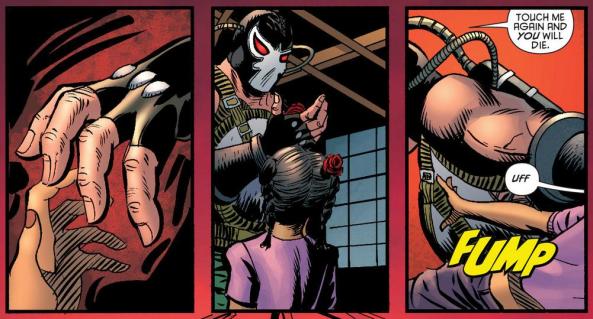 This interaction typifies the issue. Frustratingly, Bane is cast here as a man whose only asset his his ability to punch shit super hard. Peter Tomasi links this brutality with the power of Bane’s legacy. There’s a three-page portion of this issue where one of the henchmen is reciting Bane’s origin story as a sort of loyalty oath, and Bane’s hilariously depicted with his fist pulled back, ready to punch an outrageous four times in that time (with an additional two drawings of him following through on a punch). Rather than suggesting that Bane is a master tactician or a leader of men, he’s just a brute who somehow gets his way all the time.

But I suppose that’s not a deal-breaker, right? Just because I don’t find the myth of Punchy McPuncherson very compelling, doesn’t mean that there’s not an interesting story about a egotistical, homicidal, muscle-bound maniac in here. Bane’s plan, which he sorta half-enacts in this issue, is to round up the inmates of Blackgate Penitentiary, and use them as his army to wrestle control of Gotham away from inmates of Arkham Asylum. Weirdly, Bane’s not actually at Blackgate when the power goes out and the prisoners riot. That awful Play Boy Bunny character from the first arc of Batman: The Dark Knight has to explicitly connect their prison take-over to Bane, otherwise we’d never know he had anything to do with it. And even by her account: he called?

The issue is kind of a slog, miserable and violent and wordy and without any sense of joy. This is a recurring theme of our Villain’s Month criticism – it turns out that it’s sort of a bummer to follow malevolent sociopaths as they pointlessly murder people. Who knew!? But what makes this issue even more of a chore than its peers is that it serves as pointless connective tissue between greater events in the Forever Evil storyline. Andrew, I know you’re not reading comics on-the-reg, so I also understand that you’re not reading everything that DC’s publishing. The shape of things is that the Justice League is dead/missing and an evil version of the Justice League known as the Crime Syndicate has organized the villains of Earth to… I don’t know, be dicks to everyone, I guess. The myriad Batman rogues have sliced up Gotham to rule their own districts in Batman’s absence. I hope that context helps you, buddy, because on its own, I have a hard time justifying this issue’s existence.

But don’t dig too deeply into Bane’s recent history, or you’ll be frustrated by who this issue doesn’t adhere the existing universe continuity. In the pages of Talon, Bane was already set to invade Gotham, with his own private army. He didn’t need Blackgate then, why should he need it now? Hell, he was even prepared to take out the entire Court of Owls, why shouldn’t that same force be able to take down the fucking Riddler or whatever?

Andrew, my good friend, how did you feel about this issue? I thought about you earlier this month, when I was starting to feel evil-fatigue. Whenever there’s a video game with some kind of morality system, Andrew always plays as the good guy — without fail. It means missing something like 50% of the content the game offers, but he’s just not interested in being evil, even in a fictional setting. And this dude’s a serial completionist. I love him for it. Do you find anything to enjoy in a nonstop parade of punching and face-demolishing? Also, did you know that Graham Nolan, the artist on this issue, helped create the character — and even drew him during the famous Knightfall arc that found Bane folding Batman like paper? Am I maybe missing something or is this depiction of Bane as boring as it is dark?

Andrew: I was pumped to have a chance to read an issue with Bane as the protagonist. Bane has a fairly cool backstory and has a particularly compelling history with Batman: seems like fairly fertile ground for a few pages of villainy. While waiting around for the issue to come out, I did a cursory survey of the Batman rogues gallery. I’m sure I don’t have to tell you, but with nearly 75 years of Batman, there are some ludicrous baddies. I would have been less pumped to read about, oh say, the Penny Plunderer who, after being captured by Batman, was sentenced to death for stealing pennies/throwing stolen pennies at people. Yeesh. After this issue, it’s hard not to feel sorry for the Penny Plunderer — who I guess is dead now, you know, because of all the penny stealing — when I have the sneaking suspicion that Batman is just going to lock Bane up in some insane asylum… you know because of all the murdering…

Patrick, you’re right about my distaste for senseless violence. Don’t get me wrong; I find theatrical violence as entertaining as any of my peers, but if there is no effort to provide even the slightest rationalization for the violence, I quickly lose interest. ‘Why?’ the internet collectively didn’t ask. ‘Because,’ I answer dutifully, ‘a character devoid of a coherent motivation isn’t compelling to me.’ As a narcissist with a limited ability to understand others, I assume such characters are not compelling to anyone else either. This is not a deep literary insight, this is basic storytelling.

Let me just list off a few contemporary iconic antiheros and villains steeped in violence. There are characters that I love because they act in a way that is at least rational given their situation: Breaking Bad (Walter White, Jesse Pinkman, Gustavo Fring), Game of Thrones (umm… every Lannister, Lady Stoneheart), Homeland (Abu Nazir). Every one of these characters does morally reprehensible things on-the-regular but they were crafted with care by their respective creators, writers, and actors. While we may not forgive them their transgressions, it is possible to at least have some empathy for them (or so I’ve been told by those who, unlike me, can take a minute to turn themselves away from their own reflection). With Bane, we get random acts of violence which only undermine his own chances of success. To me, reading a character behaving in this way is essentially reading gibberish: it makes no sense, and I get very little out of it. I guess I was hoping for a deeper take on Bane’s motivations in what I thought was Bane’s own issue.

As Patrick said, I don’t delve into the dark side of a game’s morality system because: a) it makes my tummy turn to force a Wookiee tear his Twi’lek freind’s arms off; b) being in love with myself, I’m always looking for adulation which you get more of playing the good guy, and most relevantly; c) it never helps you accomplish a goal larger than ruining someone’s day. It doesn’t make sense that I would treat Dragon Age’s Alistair like a dick for no reason. He’s not better at helping me kills bears, or whatever, if he has low self-esteem – that’s not a Dragon Age game mechanic. Shooting Mass Effect’s overzealous Conrad Verner in the foot doesn’t help me stop the Reapers any sooner; it’s just something that should get me locked up for 10-20.

Unfortunately, it’s this sort of baseless aggression that we’re subjected to with this issue. And all of Bane’s aggression is baseless. It’s baseless when Bane is threatening to kill deranged little girls trying to say thanks and give him flowers. It’s baseless when Bane is threatening to kill the captain and crew of a ship eager to ferry him to Gotham. (A ship — by the way — he doesn’t seem to know how to operate and which his Gotham-takeover plan relies on.) It’s baseless when he murders guys in prison with workout equipment and it’s somehow even more baseless when he’s murdering apparently loyal sycophants bound with rope on his way to Gotham. All I’m sayin’ is, “Por qué Bane?”

I’m unsure how this issue stacks up with the other Villain’s Month issues but it seems a waste to dedicate a month to villains only to treat them with the same one dimensional lens we always see them through. It seems like Tomasi et al. had the opportunity to lay Bane down on the couch and ask him to tell us about his mother. Instead, they chose to incoherently summarize the Bane stories we’ve had before: raised in a bummer of a prison and pissed at Batman for not letting him run amuck in Gotham. So maybe that’s good enough to explain his antisocial nature and hatred for Batman, but does it explain throwing a 20 pound barbell weight through his own dude’s head? I’m no doctor but, no: no it does not.