Drew: I like to think that most people want to know how magic tricks are done, but every so often, I’ll encounter someone who swears they don’t — they don’t want to ruin the illusion. But let’s be honest: we all know there’s a trick — it’s not like anyone is under the impression that the coin actually disappeared, or that the lady was actually sawn in half — we can fully appreciate the effect, but we know that there’s some secret to how it was achieved. It’s only natural to want to know a secret you know you don’t know. I get a similar thrill out of thinking about how illusions in art are created, from film editing techniques to harmonic analysis to pacing and form. Those last two have been a centerpiece of Jeff Lemire’s Trillium from the start, and issue 3 offers a beautiful study of their effects.

The issue opens with a touching (if a bit cliche) flashback as Nika and her mother escape a Caul-infected planet, leaving Nika’s selfless father behind. Nika wakes from this apparent nightmare to find herself being held by Earthlab for observation after being discovered just outside of the Atibithian city. Or, rather, the official story is that she’s being held for observation, and that the Atibithians attacked her, but it’s all a cover to allow Pohl to forcibly take the trilliums without Nika’s interference. Nika manages to interfere anyway, staging a cunning escape, managing to beat Pohl’s forces to the Atibithian temple, but most of the Atibithians are gone. The remaining creatures insist that Nika go through the temple door once again, and as before, she arrives in 1921. Oh, and then Pohl’s forces somehow also travel back to 1921. 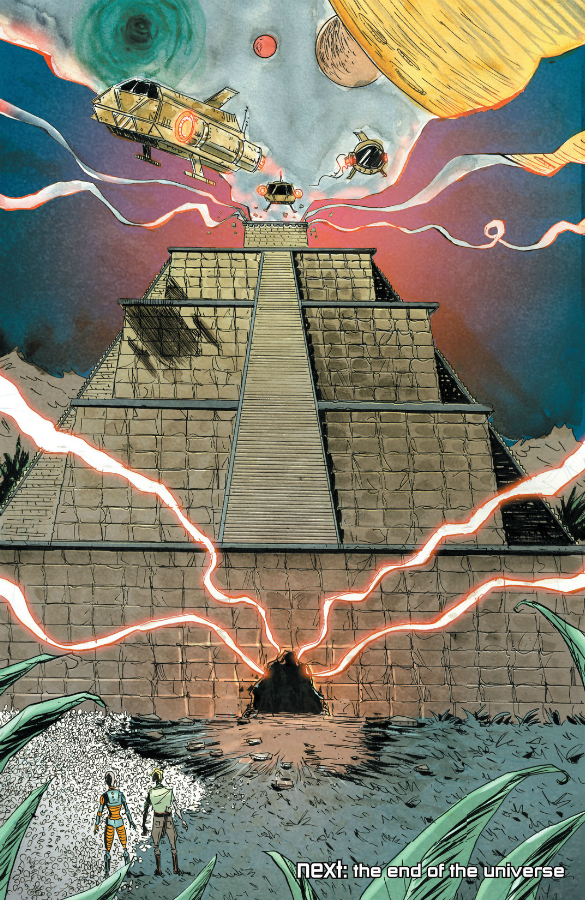 That’s a straightforward enough narrative, but it’s actually interspersed with the B-story of William attempting to, and eventually succeeding in, eating a trillium to re-open the portal. Only, his buddy Clayton simultaneously tried blowing the door open with some dynamite, which probably has something to do with the temple sucking Pohl’s ships through, too.

Calling William’s story the B-story is a bit unfair — it’s more of a separate, parallel story, that carries William to the same point in time as Nika’s. Indeed, not only are the two narrative’s equally important, the way they interact might actually be more important. Similar to issue 1, William’s story is printed upside-down, relative to Nika’s, only this time, the stories are interleaved, forcing the reader to flip the book (or tablet or laptop) over multiple times throughout reading. It draws extra attention to each time Lemire cuts from one story to another, making us acutely aware of just how he’s goosing the tension. Oh no! Pohl won’t let Nika back to the temple! Oh No! Clayton won’t let William activate the portal! Oh no! Nika’s escape plan might not pan out! Oh No! Clayton just lit the fuse of the dynamite! The rate of the flipping becomes increasingly frequent, putting the form of the issue ever more present in our minds until Lemire returns to the mirrored layouts he used in the first issue.

Those parallels draw our attention to how similar the narratives are to issue 1, building towards the same moment from different perspectives, while being utterly different, formally. The narratives of the first issue ended in the same place, and even had identical layouts, were essentially two separate, modular pieces. Here, the stories build off of each other to get us back to the moment that they collide.

Intriguingly, Lemire drops the flipping effect for the last two pages, where Nika and William are reunited, but also where Clayton discovers the Atibithians. Should one of these be read upside-down? That is, while it looks right-side-up, is that actually meant to show how disorienting these events are to characters who heretofore been represented upside-down? If so, which one is now upside-down relative to itself? You could argue that William’s story was always upside-down, but that Nika’s presence somehow reorients him. Or you could argue that Clayton’s story was always upside-down, and that traveling through the portal somehow “flipped” him.

Geez, this series is neat. Some might write off all the flipping as a gimmick, but it informs the story in a much more substantive way than more “traditional” forms. Or maybe I’m just too focused on the form to be freaking out about how spaceships from 3797 are now in 1920s South America, or about how Clayton is now on another planet, or about how William is apparently married, and has a history of mental illness. Did any of those developments make an impression on you, Scott, or are you as pleasantly distracted by Lemire’s formal mastery as I am?

Scott: It’s hard not to get lost in all of the flipping and rotating and, if you’re like me, accidentally turning the wrong page because you forgot the book is upside-down. Lemire has created a game, where we examine the two parts of the story, searching for artistic and thematic parallels. Some might consider it overanalyzing, but anytime you can extract additional meaning from a piece of art by looking at it in another way, I think it’s worth it. And putting half the pages upside-down really forces the reader to pay extra attention to form, so I’m guessing that’s exactly what Lemire wants.

That said, Lemire packs plenty of substance into his story, as well. It all comes back to the mysterious temple. I’m especially interested in learning what the aliens are getting out of sending Nika through the temple again. I haven’t yet decoded the alien language, so I’m just going off of the tidbits that are already translated, but the aliens referring to themselves as “the ushers” stuck out to me.

Several of these aliens stuck around in the face of imminent death just to lead Nika back into the temple. What significance does she hold for their civilization? Are they just the ultimate wingmen in this great love story? I don’t yet know what role they play in the grand scheme of things, but they seem to know a lot of things I don’t. At the very least, watching Clayton try to interact with them should provide a few good laughs. Or maybe some more dynamite.

This comic is incredibly engrossing. It still looks and feels unlike any other comic I’m reading. I can easily be turned off by sci-fi when I have no idea what’s going on, but I simply can’t put this one down and I fully expect Lemire will make it worth my while. I really did flip the wrong page more often than not, but that’s a testament to just how immediately captivating this story is- even after just a page or two I’m so fully immersed in the story that I’ve forgotten that I just flipped the book over 30 seconds ago. OK, maybe it happened once or twice because I’m forgetful, but mostly it was because I was captivated.