Today, Patrick and Ethan are discussing All-New X-Men Special 1, originally released October 2nd, 2013. This issue is part of the three-part Arms of the Octopus story.

Patrick: No matter how well superheroes puncture the zeitgeist, there’s always going to be a stigma around actually reading comic books. Both the medium and the genre have a ton of idiosyncratic problems, and even those of us willing to suspend our disbelief to read stories about muscly warriors putting on pajamas to punch each other in the face — a suspension which is largely worth it — struggle with the way stories are distributed. Extreme serialization leads to long epic, emotionally fulfilling stories, but it also means you get entire months where nothing really happens. On the flipside, extreme episodism leads to easily digestible stories that leave little lasting impact on the reader. Mike Costa’s Arms of the Octopus seems to have its sites set somewhere in the middle, combining the fun escapism of something like A+X, with the more meaningful stories from the series it borrows its titles from.

If — like just about everyone I’ve talked to — this mini-event crept up on you, let me just lay it out: Arms of the Octopus is a story written by Mike Costa that spans three different series. Sorta. Each issue is a “special” from a series that sorta-kinda approximates the casts of that series. Of course, this issue of All-New X-Men also heavily features The Superior Spider-Man. So even if the named-series’ cast serves as the focal point of the issue, the through-line of this story is Doctor Octopus. None of these home-series are being interrupted by Arms of the Octopus — Battle of the Atom and Infinity continue on, unmolested — so let’s just enjoy these issues for what they are: a graphic novel in three-chapters.

Chapter One follows the Original X-Men on a day-trip to Manhattan, and chronicles their reactions to the very different world they find themselves in. Scott and Jean struggle to find a quiet place in the city to veg-out; Bobby is enthralled with a yoga class in Central Park; and Hank follows a cute girl back to their mutual college professor, Dr. Jude. The reunion — which is awkward for a couple reasons (not least among them is the time-travel involved) — is cut short when Doctor Octopus bursts through the wall… looking like a blast from the past. 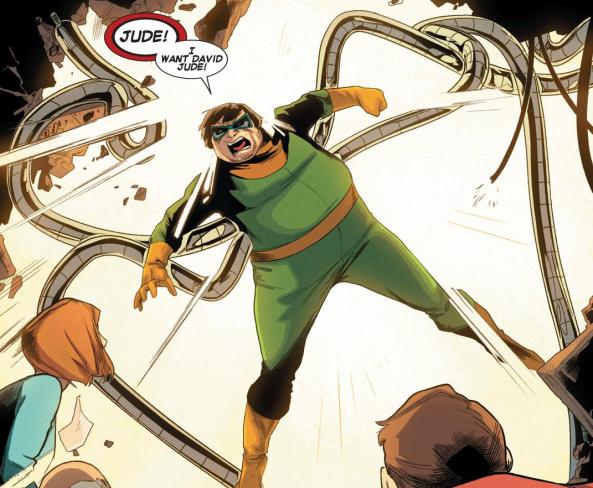 Beast leaps into action, thinking nothing of Ock’s surprise appearance, and it isn’t long before the rest of the Original X-Men are fighting alongside him. It’s not until Spidey shows up that the weirdness of the situation sinks in. The X-Men follow Spidey’s tactically correct orders and they subdue the Doc. They take him back to Dr. Jude’s lab to figure out what the hell’s going on, and Spider-Man determines that time travel must be involved, so he calls S.H.I.E.L.D.’s time-traveler-in-residence, the Indestructible Hulk, for assistance.

For all of the virtues of Brian Michael Bendis’ All-New X-Men, one area its been lacking is addressing the real-world perspectives of visitors from the past in the present. Sure, sure, there are excellent moments of the Original X-Men discovering what has happened to the X-men in the intervening years, but there’s little that’s been said of what happened to the world in that time. X-Men #1 was originally published in 1963, and I know we’re dealing with some flexible-ass time-lines, but take a second to consider just how different the world has become in the last fifty years. Mike Costa uses the ol’ Times Square Shocker — a staple of outsiders-being-surprised-by-modern-NYC stories — to draw attention this. If you’ve been watching movies over the last decade, you’ve seen this trick employed a couple times – my girlfriend chimed in with the example of Enchanted – but I thought immediately of Captain America: The First Avenger. It’s a hyper-sensory moment, one that simultaneously celebrates and criticizes the bright, crass, sensational commercialization of American culture. We immediately know exactly what it means, but we also know how alien it must feel to a quartet of teenagers that missed the culture’s gradual transformation. 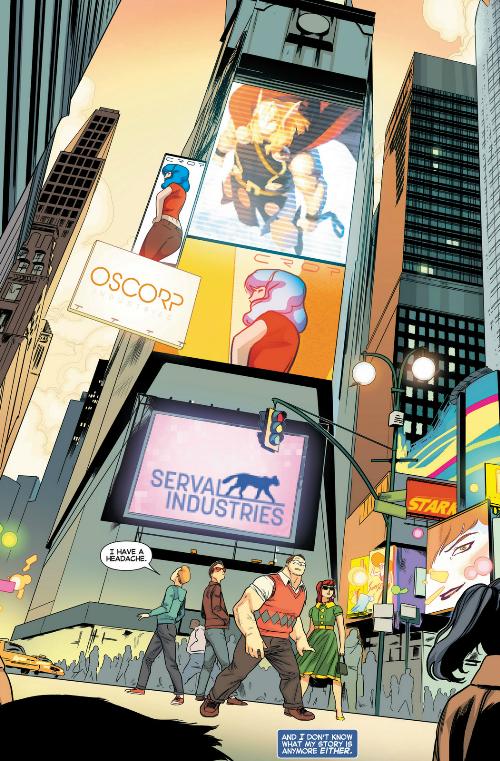 I really like the appearance of Doc Ock in this issue. Interestingly, Otto also made his first appearance in 1963, which makes him a contemporary of the Original X-Men. So it actually does stand to reason that Otto could have been pulled into the present by whatever means Beast used to get them them there. More than those mechanical concerns, however, I’m interested in what it means that writers are pulling from the same era of comics. Both X-Men and Spider-Man have changed drastically since their introduction, and just as the Original X-Men point to what is so elementally appealing about the concept, so too does the original Doctor Octopus point to what’s so compelling about that character – at least theoretically. Ethan, you can correct me on this if you felt differently, but as of the end of this issue, there’s very little to distinguish the menace Doc Ock ’63 represents from any other generic bad guy. Actually, one of the defining traits of Otto is his self-perceived victimization, and our heroes are sorta playing right into that, by beating up and disarming the guy when he was explicitly looking for help.

Artist Kris Anka is a great choice for evoking that more cartoon-y, clean 1960s aesthetic. His rendition of plump, dopey Otto is a show-stealer for sure, but he extends that slightly awkward-cute vibe throughout. I love how Hank appears almost uncomfortably large, emphasizing the idea that his pre-blue-fur beastliness was awkward too. And then there’s the moment that Hank is love-struck by the woman in the park. Not only does he see hearts, he sees a ruler, a protractor and a microscope.

Ethan are you digging this story as much as I am? I love the idea that we’ll read these three specials and then that’ll be the end of this journey. Whatever mystery we’re dealing with is promised to be revealed by month’s end – that’s exciting right? Also, you can’t tell me that Otto’s not more open to the idea of time travel – he’s dealing with Spider-Man 2099 right now. Got an explanation for that?

Ethan: Patrick, I love your A+X comparison. The first couple of times I read this, I knew that my favorite part was the interactions between Otto and the X-Men, but I still thought of it as more of a standard team-up situation. To some extent, you can argue that it is, but the comedy – both in the surface dialogue, and the almost Shakespearean dramatic irony we’ve got going on with two Ottos in the picture – really does have a very A+X flavor to it.

Every moment of Spider-Man interacting with (read: bossing around and insulting) the X-Men is priceless. I agree with your assessment that his tactics are spot-on, too. Not only is he a pretty smart dude, but as of right now, Spider-Man twice-over the world’s best expert on how to take down Doc Ock. What I really enjoyed, though, was how Otto applies this same practice of quick, in-the-moments assumptions and decisions to labeling the Young X-Men, which are almost as weird to see in modern New York as Doc Ock himself (after all, Jean and Doc are two birds of a feather “dead” when it comes to being dead).

In the space of a few second, Otto manages to push Jean’s buttons like a pro: 1) everyone knows you’re dead, so, you’re a clone or a Skrull or something; 2) your identity is pretty much that of “cosmic destroyer” and “Scott’s girlfriend”… with an emphasis on the latter, to be honest. Otto couldn’t care less what they call themselves, if “Cyclops Jr.” and “Iceboy” and “Jean Grey clone” work in getting their attention in he middle of a fight, he’ll indulge himself in this condescension while he takes care of business.

The second thing that grabbed me about this issue was just the simple thing of seeing Spider-Man hanging out with the X-Men. For one reason or another, this triggered some big echoes for me. New Avengers volume 1, with its hilarious scenes of Wolverine and Spidey coming at the problem of being a loner who’s now part of a very conventional superhero team, from VERY different angles. Ultimate Universe Spider-Man, dropping by the Xavier School, getting ooh’ed and ahh’ed at by the students, and sparking off a fun, quirky relationship with Kitty Pryde. I know that this issue was worlds away from the Ultimate storyline (ouch, no pun intended), but there’s something that always resonated well when it came to Spider-Man hanging out with the X-Men. Spidey’s got his PR troubles, and his money troubles, and the fact that he didn’t fit into society all that well even before he started dressing in red and blue from head to foot. In that respect, he’s a perfect fit at the Xavier School – the world can’t quite find a place for him, but he’s consumed by his passion to do good and to protect that same culture, all the same. Only there’s the little technicality that he’s not, you know, a mutant. Bobby’s comment about Doctor Octopus could have as well been leveled at Spider-Man himself: 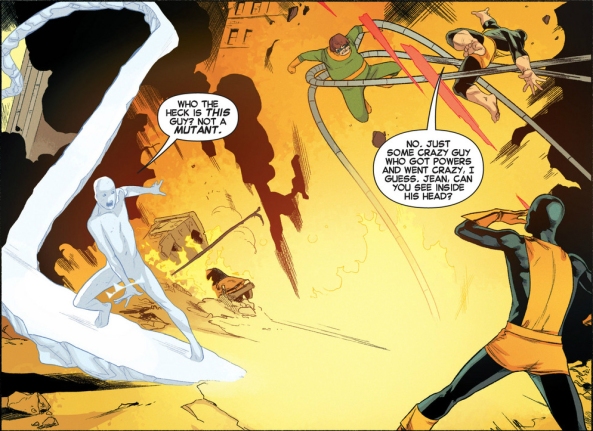 Without digging too deep into the problematic hypocrisy of “Us vs. Them” that the X-Men are always struggling with, this panel serves to at least give a nod to the issue. The X-Men are a little weirded out by Spider-Man, mostly because of his jerky Otto-ness, but also to the same degree that they’re weirded out by anyone who has superpowers without the X-gene. For them, superpowers are a natural part of being a superior sort of human, so whenever they run into someone else who’s slinging around a distinctly not-human skill set, there’s always the moment of evaluation. Is this person one of us who’s just off their rocker, or are they one of THOSE people – a normal, un-evolved person who’s making the same bad decisions with their remarkable abilities as Magneto made with his own “god-given” ones?

Finally, there’s the question of where the heck Mr. Octopus came from. Otto is clearly not convinced that this Doc Ock is the real deal, and his conviction seems to come in a few parts. First, as he says to the group, Doctor Octopus is dead, as public record will show, and time-travel is allegedly the exception to the rule. Second, Doctor Octopus was a formidable adversary and would have handily defeated these youngsters, clearly! The arrogance of that assumption is classic Otto, but it’s interesting that he doesn’t quite realize that this is exactly what was happening before he came along – the X-Men might have rallied and won anyway, but Spider-Man’s appearance and his quick thinking is clearly what turned the encounter around for them. Third, Otto doesn’t remember any of this happening. He obviously can’t come out and say that, but it seems like this is the reason he’s so certain that he’s dealing with an imposter. Doctor Octopus’s appearance is “some kind of sick joke”; his robotic arms are “an almost perfect replica”; whatever this is, it CAN’T be Otto Octavius.

Whether it’s some kind of alternate-past version we’re dealing with, or whether this past-Otto is going to get a royal conk to the noggin, I’m guessing that Spider-Man is letting his assumptions get the better of him. One way or another, I’m looking forward to seeing Doctors Octupus and Banner get some facetime.