Todd, of course, is nominated tonight for Best Actor for his chilling portrayal of a psychic FBI agent who falls in love with a beautiful, deaf dolphin trainer in the amazing film Sea of Echoes.

Patrick: DC has since abandoned the following nomenclature, but Animal Man used to fall under the line of “Dark” comics. This distinction generally just meant supernatural: we weren’t dealing with alien supermen or gadgety crime fighters, but Swamp Things and Magicians and Vampires. These stories also veered more into the horror genre, and there are few series that took that “dark” label to heart more literally than Animal Man. Buddy’s enemies are grotesque, his powers distort his body and mind and the bad guys routinely target his family. Hell, agents of the Rot killed his son. Writer Jeff Lemire is always careful to keep his eye on the tone, and keeps the series from becoming a slog. He’s able to lighten the mood here by pointing to his own work, and that of new series artist Rafael Albuquerque, and remind us that it might all be sorta silly. It’s a healthy reminder, and one that makes all the surrounding darkness go down a little smoother.

Within the Red, Brother Blood and the member of the Parliament of Limbs — which I will heretofore refer to as Ram-Horned-Face — execute their coup. Within seconds, the other members of the Parliament are murdered and the entire tenor of the Red changes. Maxine’s loyal following rallies around her and whisks her off to safety on the edge of the Red. Unfortunately, this means that Maxine will have to give up her crusade to bring her brother back to life. Naturally, this is heartbreaking. 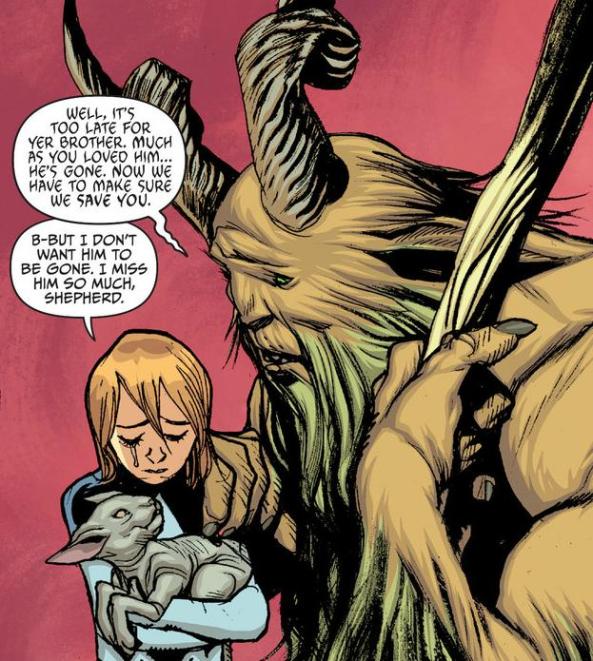 Maxine has always been an irrepressible ray of sunshine — upbeat and adorable in the face of any adversity. She’s been our cheerful guide through so much grizzly shit, and her love and enthusiasm have been unflappable throughout. Cliff’s death was a tough blow, and that Jae Lee cover to issue 18 expressed Buddy’s anguish pretty impressively at the time. But there’s not much that can compete with the naked honesty of a child. Albuquerque is an inspired choice to take over for Steve Pugh. Pugh, while a great artist in his own right, often labored under the shadow of Travel Foreman, paying homage to his sinewy style for over a year after Foreman left the series. Albuquerque doesn’t subscribe to the same guts-aesthetic, and all of his darkness comes from dramatic posing and acting. That same gift for staging allows quieter moments, as the above between Maxine and the Shepherd.

Albuquerque’s style really shines when we pop back into the real world. The Splinterfolk that had previously attacked Animal Man disappear into the Red, allowing Buddy to take a call from his wife. Maxine is missing, and Ellen and her mother are freaking out. It is the evening of the 85th Annual Hollywood Screen Awards, and the awards show is providing some cold comfort to Grandma. Buddy and Ellen make up, and resolve to rescue their daughter together. Just then, the HSA’s are hijacked by an agent of Brother Blood demanding Buddy Baker turn himself in. And, hey, if not, he’ll just kill everyone at the award show.

The lead up to that hijacking is my favorite part of the issue. There’s a fair amount of joking around that accompanies the red carpet celebrity worship. Jeff Lemire loves his celebrity sound-a-likes, as previously confirmed with the director of Buddy’s film being named Ryan Daranovsky (an obvious reference to filmmaker to Darren Aronofsky). The award show itself is hosted by a comedian with a receding hairline named Jimmy Diamond — a reference to perennial Oscar host, Billy Crystal. When it comes to the show biz side of the Animal Man saga, Lemire doesn’t mind getting a little goofy. One of the guys nominated in Buddy’s category is praised for his “underwater scenes alone” which could be a reference to Lemire’s own Underwater Welder series. And then one of the presenters came to fame by playing Skinner Sweet — the protagonist in Albuquerque’s American Vampire series.

Admittedly, that’s all just dressing on a well-crafted story. This issue promises to be part 1 of 2 of “Hollywood Babylon,” which suggests that we might need to wait yet another month to find out what’s happening with Maxine. Frankly, I’m sorta looking forward to Buddy rescuing the Hollywood elite in a real, physical space. I like the fantastical land of the Red, but there’s something so concrete about being able to image the space the Awards are being held in. It’s a tiny detail, but Albuquerque is sure to give us at least one solid panel laying out that space. 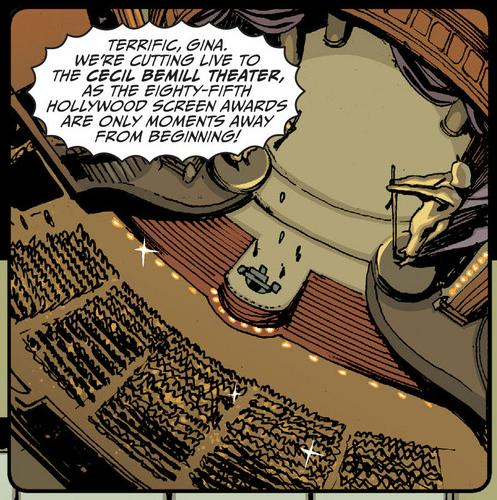 Scott, how are you enjoying the new art? It’s not nearly as gruesome as we’re used to, but maybe that’s a good thing. I mean, the members of the Parliament of Limbs fighting to the death should have been the most disgusting thing possible, but I’m almost relieved I didn’t have to see that as horrifyingly imaged by Steve Pugh.

Scott: You’ve got to hand it to Pugh, he knows how to do gross-out imagery. It’s what I’ve come to expect when reading Animal Man: there will be at least a couple panels that test the integrity of my stomach. I appreciate that Albuquerque is taking a different route, proving that this title can be scary without the gore. In fact, I found this issue to be particularly scary, due mostly to the acting and staging in Albuquerque’s art. It’s frightening right from the start, with the scene in the cell with Buddy and Hogue setting the tone for the rest of the issue. 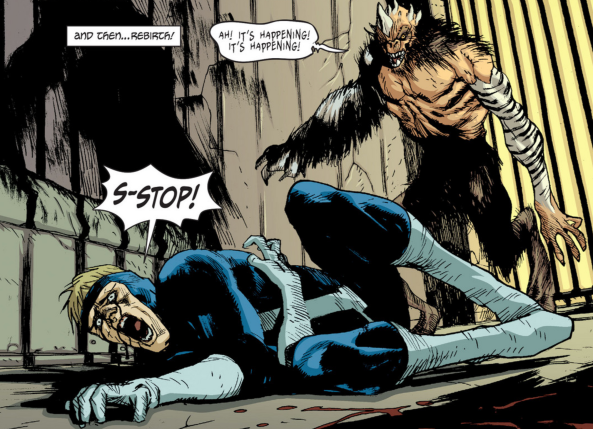 The look of absolute horror on Buddy’s face is haunting, but it’s his hands that put this panel over the top for me — contorted into claws, awkwardly wrapped around him, grabbing at nothing in particular. Those are the hands of someone experiencing immense pain — pain so great it can’t be described with words. This panel is almost too intense; it’s been so long since Animal Man 23 that I didn’t immediately remember how that issue ended, and Albuquerque had me wondering if I had forgotten that Buddy was seriously wounded by Hogue.

Like Patrick, I really enjoyed the real-world settings in this issue, and I think it’s because of the drama Albuquerque incorporates into those panels. I love the way Albuquerque adds tension during the phone call between Buddy and Ellen. It’s a brief conversation and he could have gotten away with not ever showing Ellen at all. Instead, we see a frantic Ellen sitting in the dark on the floor of her kitchen, of all places. 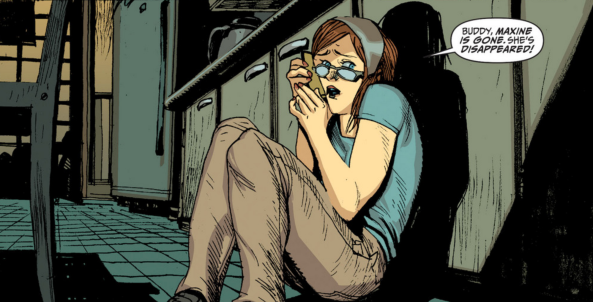 Ellen’s body language is important. She looks afraid, and that alone makes the scene scary. For me at least, the fact that’s she’s on the kitchen floor adds to the eeriness of the scene. It’s just so irrational. It looks like she’s hiding from something, too scared to even move.

Albuquerque’s art is a natural fit for Lemire’s style, which employs constant dramatic shifts among its characters. The acting throughout the issue is just phenomenal, and it really helps sell the big emotional moments, like Buddy and Ellen’s heartfelt reconciliation. 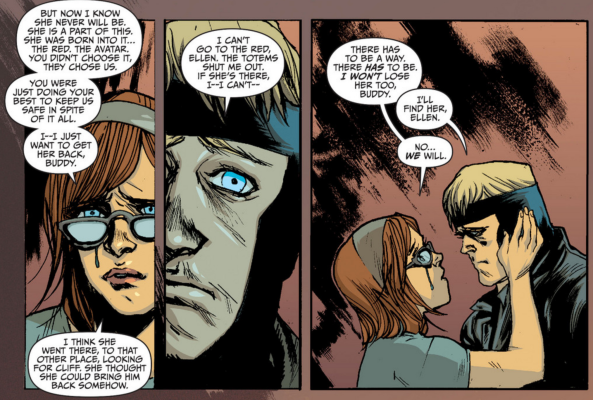 This is really good melodrama. I didn’t expect Ellen and Buddy to get back together by the end of the issue, but while reading those panels I realized that I really wanted them to. That’s the power of great writing with great art — it makes you see clearer. It’s awesome to see a writer/artist team gelling so quickly and awesome that we’ll get to see their relationship develop in the coming months.