Drew: When evaluating a work of art, I tend to ignore the artist — I’m far too focused on what the art means to me to care about what it means to anyone else, even if that anyone happens to be the one who made it. I think it helps me stay focused on the work in question — it’s all to easy to excuse bad art from an artist you like, or dismiss good art from an artist you hate — and focus on the meaning of a work of art. Occasionally, though, the artist (or the context into which the art was released) dominate the work’s meaning. Van Gogh paintings are presented as springboards for discussions of madness, and Beethoven symphonies simply cannot be performed without someone mentioning deafness. The real-world drama surrounding the release of Batwoman 24 are not nearly so biological, but in many ways, that only makes the issue a more frustrating read.

The “This Blood is Thick” arc has all been building towards the execution of a plan we aren’t entirely privy to — think Ocean’s 11 — and issue 24 finally gives us the first half of that plan. The Arkham inmates Chase released to bait Batman are tearing Gotham apart. It’s all Kate can do to keep herself from stepping in, but finally, Batman arrives, quickly discovering that Bones is behind everything. Batman confronts Bones, but Batwoman is there to defend him, and the Bat-people duke it out. Meanwhile, Bette’s training has paid off, and she easily infiltrates the D.E.O. facility where Beth is being held. Unfortunately, her plan seems to only get her to Beth’s cell, with no escape route.

I don’t mean to oversell the departure of J.H. Williams III and W. Haden Blackman — this series is going to have to conclude this arc (even if they’ll delay it yet another month with a diversion to Zero Year) — but dammit, I wanted to see what their plan was. They’ve played this whole arc very close to the chest, and the payoff was going to largely lay in how all the setup paid off. It’s all well and good that we’ll get a conclusion, but it’s hard for me not to lament the fact that we won’t be getting the conclusion. Again, I shouldn’t oversell the writer’s authorial voice — comics are a collaborative medium, and, like it or not, the editors are collaborators, too — but artworks finished by other artists occupy a dubious place in history, even in the most collaborative settings (see: A.I. or Beethoven’s Symphony No. 10).

I don’t want to turn this write up into a eulogy for Williams and Blackman’s run — it wouldn’t be fair to them, or this issue — but the turmoil that drove them from this series has left fingerprints all over the issue. Sandu Florea and Derek Fridolfs offer artist Trevor McCarthy an assist on a few random pages (likely due to the last-minute editorial changes Blackman mentioned in his departure announcement) — turning in finishes that are drastically different from McCarthy’s typically polished style. I was downright distracted at how unfinished Fridolfs finishes looked:

This doesn’t feel like the Batwoman I’ve come to care so much about, making the fact that this is Williams and Blackman’s last all the more disappointing. That big black bar that runs down the center of that sequence appears in the two previous spreads, as well. It almost acts as a visual cue that these aren’t double-page spreads, but the thunderbolt motif that splits the page in each case ties the opposite pages together. Williams and McCarthy have always used and reused motifs, but have never repeated them as wholesale as they are repeated in these closing pages — and I’m still not sure what those black bars are doing there.

The only scene that feels totally true to this series is Maggie’s confrontation with Chase — who has just declared martial law in Gotham. Maggie knows that this isn’t part of the plan, Chase is surprised to learn that Maggie knows anything about the plan, and Bullock is just trying to keep the peace. Maggie gets to be tough, Chase gets to be slimy, and Bullock gets to be confused at what any of this has to do with Kate Kane. It’s a great scene.

Geez. The good scenes are bittersweet, and the bad ones just leave me feeling bitter. It’s hard to read this issue without the baggage we all have about Williams and Blackman’s departure — even our guesses about what might happen next are loaded. Are you having as hard a time taking this issue on its own terms, Shelby? What do you suppose Beth is going to do once she gets those gloves off? And/or what do you think she was going to have done once she got those gloves off?

Shelby: I knew exactly how this issue was going to go the moment I saw the creators’ names on the covers. 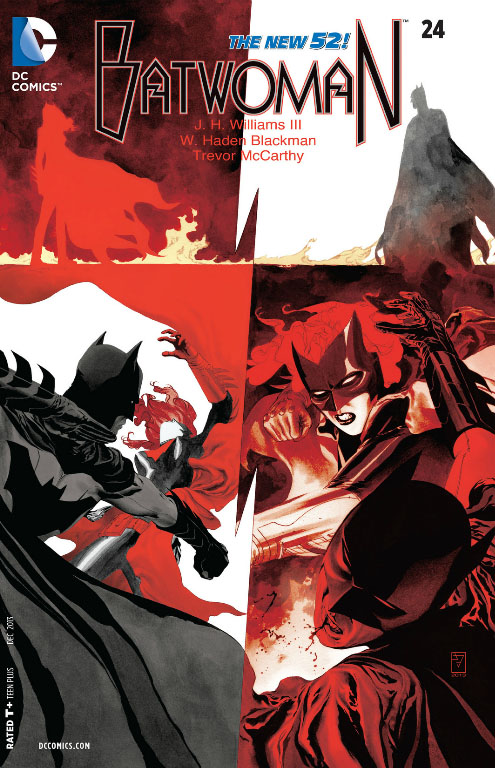 And with that uninspired sans serif font, I knew it was the end. Drew, I understand and agree with you that this shouldn’t turn into a eulogy, but that’s really what it feels like. It’s bad enough that Blackman and Williams are leaving this title, but to not even get to finish it breaks my heart. I certainly don’t mean this as a slight to the new creative team; in fact, I feel especially torn on what to do with this title now. I don’t like the way DC treats its creators, and I DEFINITELY don’t like the editorial decision to bring in the new team before this arc is finished. I think it’s disrespectful to the all the artists involved and its disrespectful to the fans. Blackman and Williams deserve the right to finish what they’ve started, just like Marc Andreyko deserves to take this title over and make it his own instead of finishing up someone else’s story and creating in the shadow of ire DC editorial has earned from fans. A big part of me wants to drop this title going forward, but I know that all that will do is punish Andreyko and the rest of the new team, and I don’t want to do that. I don’t know what to do just yet.

The biggest disappointment for me is not really seeing what will happen with Alice. My love for Alice is well known ’round these parts; I love her enigmatic origin, and I especially love the complications she added to Batwoman’s story. I couldn’t wait to see her outcome in this arc, and now we won’t get it. What could those gloves be for? She doesn’t have any powers they could hinder, so what are they hiding? Was the plan always to have Kate distract the DEO with the fight with Batman, or is she still genuinely trying to deliver him to them? The bat has no love for the DEO, he probably would have gone along with the plan, though he may have had some objections to the whole “releasing a psychopathic murderer” part.

As intriguing as I find the details of Team Batwoman’s plan, I’m more intrigued by the effect having a team will have on Kate. She has stubbornly tried to shoulder the burden of the Bat mantle largely on her own, especially since Bette was attacked. Now she’s got a partner in the field as well as a team at HQ, one of whom has direct ties to GCPD, which I believe makes her the first member of the Bat family with someone on the legal side of law enforcement who knows her secret. This has heavy implications for her personally as well as for the GCPD, and I am again disappointed Blackman and Williams will not be able to lay those final pieces in place before they depart. All in all, this is an extremely disappointing end to a run that has been challenging, risky, unique, and beautiful.