Today, Greg and Taylor are discussing Indestructible Hulk Special 1, originally released October 16th, 2013. This issue is part of the three-part Arms of the Octopus story.

Greg: A friend of mine asked me the other night, “If a guy teleported in front of you, told you he was a time traveler, and asked what year it was, how would you respond?” We’re both comedy folks, so I imagine he was looking to start riffing. Yet rather than fire off any number of instinctual punchlines (“What year is it? Why, it’s Christmas Year, sir!” is one of the many perfect ideas I had), I decided to pause, think, and mull over what I, Greg Smith, human being, would actually do if that actually happened.

“I would probably try to ask him who he was, stammer out panicked words, and then fall over.” And that truth, over any dumb joke I could’ve invented, made him laugh.

Mike Costa’s story is an absolute crackerjack yarn to read through because of this fundamental concept of storytelling: reacting to fundamentally illogical situations as logically as possible. Thus, the story of Bruce Banner dealing with a time-traveling maybe-he-is-but-maybe-he-isn’t Doctor Octopus with the 1960s All-New X-Men and Superior Spider-Man avoids any convoluted pitfalls or plot traps by presenting clear, identifiable, and wholly human reactions and points of view. And believe you me, with robot monsters, wrinkles in space and time, and several separate factions to keep track of, this is not an easy task.

This storytelling approach matches the point of view of Bruce Banner, our central character, perfectly. He’s a man, more than any other superhero, who’s been charged with an impossibly difficult power, one that’s so overwhelming and encompassing he can’t even control it. If one can’t control something, one must instead react to it as best and pragmatically as one can. Do this, and you succeed at remaining human, at keeping the beast at bay for at least a moment.

It’s this line of thinking that leads to one of the chief joys of this issue: a beautifully dry and level-headed sense of humor. Jokes here aren’t one-liners robbing the issue of its power or laughing at its lack of plausibility; rather, they’re observational nuggets of honesty which simultaneously strengthen what the issue is fundamentally about.

For example: how, really, can someone calm down the Hulk? Costa avoids any amount of strained invention or pseudoscience in favor of maybe the single greatest superhero picture of I’ve ever seen, that stems from a simple human observation. Puppies are awesome. Puppies can calm people down. Therefore: Puppies calm down the big guy. 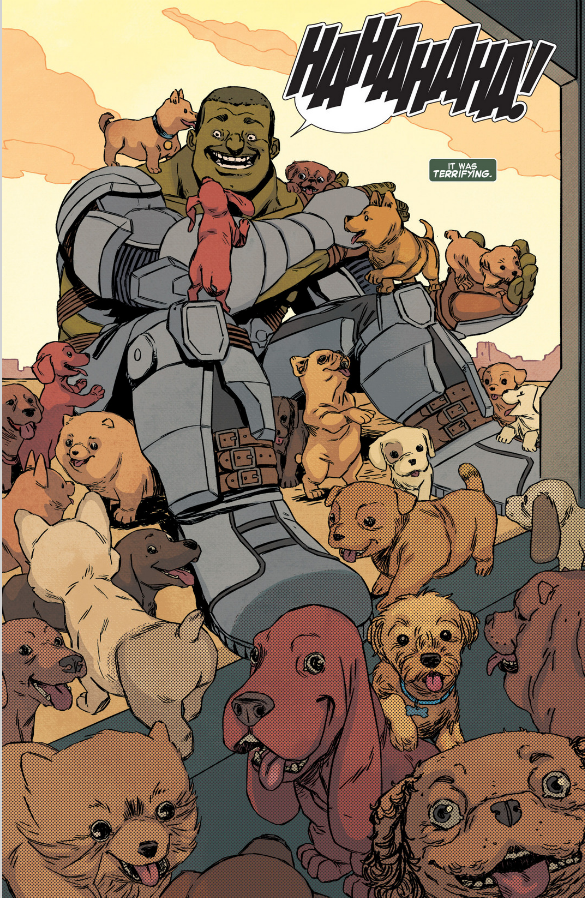 Jacob Wyatt’s art is a marvelous aesthetic complement and extension of this writing style. His work is succinct and clear, yet never flat and boring. Even on huge splash showcases like the nonlinear portrayal of everyone working, with multiple renderings of the same person in different spaces and times, are communicated easily and immediately understood. In one section of this page, Dr. Jude looks at a theorem and marvels to himself, “Really? That sophisticated?” I found myself saying the same thing, but for different reasons.

This issue works like an efficiently badass fighter robot, with each part simultaneously performing its own badass task while also following the orders of the central badass robot CPU. Jorde Bellare’s coloring, in this case, would be the robot’s badass secret weapon.

Throughout the issue, there’s a beautiful usage of single-color patterns in the background. This technique, like any good piece of design, serves its observed function immediately, yet the formal ingenuity of it sneaks up on you. The throughline of the issue is seeing the central humanity behind any external obstacles or convolutions; therefore the choice of simple, solid colors in the background frames and draws attention to the humans in focus beautifully. I’m particularly struck by the stunningly orange sky contrasted against the greens of Hulk borrowing the head of Robo-Abomination (Robomination?) 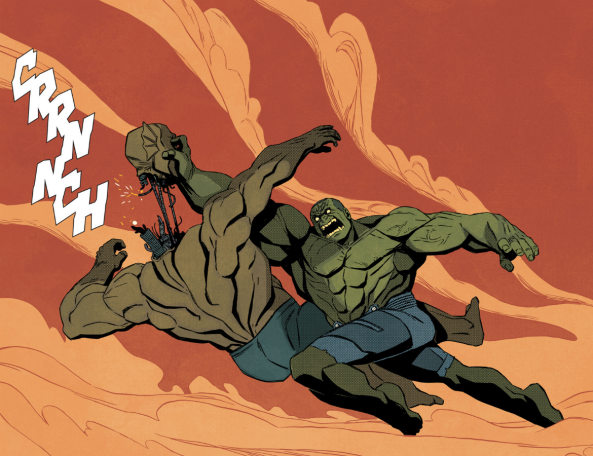 When attempting to read the Hulk’s mind, Jean Grey compares her lack of success to dealing with a child – a marked contrast to the maturity of Bruce Banner. In some ways, this issue (and any story about the Hulk) presents the best of both worlds: the simplicity and clarity of a childlike point of view, coupled with the formal expertise and world-weary observations of a seasoned adult. What did you think, Taylor? And how would you react to that time-traveling question?

Taylor: I would imagine I would say “What?” first then I would tell the poor chap the year. Then I would want to know all the things. Can cars fly? What weapons did they use in the third world war? Do they ever come up with a more addictive food than Doritos? Do I get cyborg legs after the “accident?”

Greg, I also really enjoyed this issue, not least for some of the very reasons you mentioned just now. I know you talked about it already, but I think we need to show everyone the full page spread where Banner and company are working in the lab. 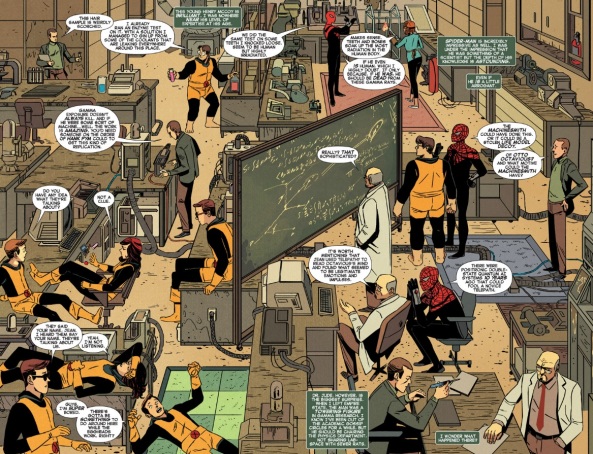 Jake Wyatt is basically putting on a clinic on comic art throughout this issue and this panel is a perfect example of everything he gets right. More noticeable here is the way time is portrayed throughout this image. There’s no right or wrong way to go about reading all of these speech bubbles and the reader has free license to begin and end wherever she or her likes. It’s a neat effect that gives a huge amount of control to the audience and it’s hard to think of any medium save video games that allows for such fluidity. Despite what could be a pitfall, it’s more than clear that we are witnessing the passage of time in this panel and the number of ways Wyatt portrays this, from the bored X-Men to Banner’s different poses, is both fun and effective. What’s even more astounding is that when I was reading this issue I found myself wanting to capture almost every image of it for my write up. While I do suffer from an inability to make choices when faced with many options regularly, that really wasn’t the case here. Instead, it’s just that the art is that good. Choosing a favorite image is like trying to pick a favorite between cool ranch and nacho flavored Doritos. IT CAN’T BE DONE.

But the art isn’t the only thing that makes this issue a pleasure to read. Again, Greg, you’re analysis of Mike Costa’s is spot on. The tone he strikes in this issue walks the fine line between nutty fun and actual consequential action. While the dialogue keeps things lighthearted you can’t help but be wrapped up in the mystery that’s taking place in these pages. Additionally, the picture he paints of Banner strikes me as something remarkably genuine. Here, Bruce is a man who has come to terms with his Hulky and who knows the dangers and thrills that come along with turning into a green machine of destruction and rage. While Bruce has come to terms with that singular fear, he still has the capacity to feel excitement when faced with a scientific mystery and little resources. He becomes absorbed in his work and for Banner this is perhaps him at his happiest.  Also, his reaction to the time traveling X-Men (in reference to the Battle of the Atom event) is classic. 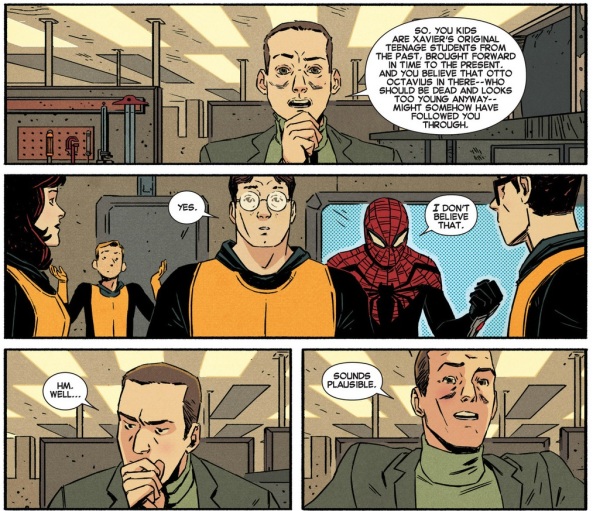 After a good hard thought, all he can muster is a “sounds plausible.” It’s a typical reaction regarding time travel in the Marvel Universe and perhaps sums up Marvel’s view on time travel in general. Instead of trying to make hard and fast rules, those in charge seem to look and it and say “meh” with a shrug of the shoulders. Time travel can happen, and maybe certain consequences happen because of it, but there’s no need for grand edicts or proclamations about it’s use in any given title.

I can only hope such rules govern time  travel in our own universe. That way, if a dude suddenly appears in front of me claiming to be from the future and asks me what year it is,I can respond with a joke that will make us both laugh and not have to worry about how my actions might have caused me never to have been born.