Drew: The lone wolf has always been an alluring figure. Every continent has their tales of solitary, wandering soldiers — most often period stories (knights, ronin, cowboys) — but comics have always featured that notion pulled into the modern day. All-Star Western has always been about playing with that line, often in reverse, pushing our expectations of superheroes back to the old west, but the current arc makes that relationship explicit, pulling Hex into the modern day DC Universe. Surprisingly, he fits in quite well.

The issue begins by explaining away Jonah’s trial (he has public opinion on his side), freeing up Jonah to wander the country. Arkham suggests that Hex simply couldn’t survive in the modern world, but one month later, Hex seems to be doing just fine. 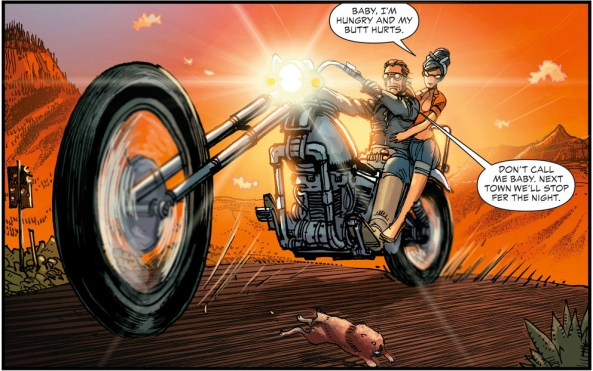 Hex has found kindred spirits in the modern west, where the ideals he embodies are worshipped in the form of old westerns. He’s on his way to dig up a box of treasure he buried in the 1800s, containing $100,000 in gold, and antique bills worth some unspoken fortune. Accompanying him is Gina Green, who acts as his steward throughout the issue, skating him on her credit card until they recover the treasure, and helping update his arsenal of pistols. At the end of the issue, they’re approached by John Constantine, who warns of a giant demon about to unleash hell on Earth.

I had lost a bit of interest in this title when Hex showed up in the modern day — something about the humor of the fish-out-of-water thing didn’t jibe with the character for me — but writers Jimmy Palmiotti and Justin Gray find the through-line for a modern-day cowboy in this issue. Having not read the whole of this arc — where Hex was both persecuted and prosecuted for his vigilante ways — I can’t speak with any authority on what Palmiotti and Gray might be saying about city vs. country or east coast vs. out west, but those contrasts seem important for Hex’s success in this issue. There are passing mentions of gun control in the courtroom scene, but are addressed so vaguely as to be completely toothless.

I straight-up don’t understand this argument: how does being contacted by representative of both sides of “the argument” influence the judge one way or the other? Like, he’s disappointing one group either way. Ultimately, the judge is cowed by the Mayor’s interest in the case — a totally boring (and equally nonsensical) copout — but none of this is really the point of the issue.

Neither is Bruce and Arkham’s willingness to let Hex (who they both believe is actually a time traveler) just wander away from the courthouse. Arkham even states that he thinks Hex isn’t equipped to survive, but neither of them do anything about the situation. Again, it’s not really the point of the issue — Gray and Palmiotti just need to get Hex back out west, but it feels distinctly like vague hand-waving. I’d probably be more willing to accept Arkham’s assessment as just set-up for showing Hex thriving, but they scuff the punchline with the title card, telling us what the joke is before we actually see what’s funny about it.

Those title cards seem a bit more overbearing than usual, working just a little to hard to be funny, tipping their hand at an authorial voice. The scene where Hex and Gina visit a local bar is preceded by a card that reads “We know what you’re thinking. And you’re wrong.” Only, I have no idea what it is that they’re talking about. Is it that Hex might get into a bar fight? Sure, that occurred to me when the hotel clerk suggested that the bar “gets a little rough” a few panels earlier (Hex does have a reputation for bar fights), but the card isn’t jumping us from that thought to the bar scene — that thought is interrupted by the discussion of the “weirdo sex festival.”

Thoughts of Jonah Hex at a weirdo sex festival are obviously the most salient after reading that panel, so the “We know what you’re thinking” seemed to apply to whether or not suckers are the only things Jonah puts through that cheek hole.

Aside from those few small gripes, I actually enjoyed this issue quite a bit. The one word introduction to Constantine? The Raiders of the Lost Ark homage when recovering the treasure? Hex buying a semi-automatic? All of these were fantastic. I’m also thrilled at the prospect of a Hex/Constantine team-up — they’re not the most intuitive team, but there’s something alluring about seeing the only two smokers of the New 52 (outside of the GCPD) talking to each other. For better or for worse, these guys are both from another era, which gives them outsider status in the updated DC Universe.

Taylor, I’m willing to bet that you enjoyed all of those elements as much as I did (though I’ve been wrong about this kind of thing before), so I’ll leave it to you to really dig into what was fun about this issue. First, though, can you explain why there would be so many unicycles at a weirdo sex festival?

Taylor: My best guess is that having sex while riding a unicycle is probably one of the most gratifying actions you’ll ever attempt. Just think of the amount of concentration and skill needed to pull that off. Doing that instantly puts you ahead of the average person and what better place to attempt the impossible than a weirdo sex festival? Also I’m pretty sure the festival in question is supposed to be Burning Man, the week long event held in the Nevada desert that in theory celebrates self expression but in actuality celebrates hedonism. Perhaps for copyright reasons, Gray and Palmiotti were unable to talk about the festival with it’s proper title, for so litigious is our society these days even the most granola and hippy inspired endeavors are protected by a team of insidious courtroom types. That could be why it’s referred to as a weirdo sex festival but that doesn’t really matter. It’s still the perfect place for a demon rampage.

Like you, Drew, I was a little skeptical of the whole “Ol’ Cowboy in the Modern City” cliche this issue seemed to be heading for. However, Jonah is whisked away from all of that in the turn of a page and the issue is all the better for it. It’s a safe bet Gray and Palmiotti realized this and that’s why we don’t get any explanation as to why Bruce and Arkham never follow up on the man they seemed so invested in previously. Sure, it maybe makes for nonsensical plot points but the sooner Jonah is back in this element, the West, the better.

This West, as it is portrayed in All-Star Western, is what I found most interesting in this issue. We can’t help but compare this modern West with the Old West that Jonah left behind before his time travellin’ days. In some ways the west is the same and in some ways it’s different, however, the constant is that Jonah is equally at home in both. This is exemplified by the ease of which he is able to not only meet a travelling companion, but also his sudden ability to manage a new kind of steed.

The similarities that exist between the West of old and new serve to highlight some interesting aspects of our own society and that’s what I found be the bread and butter of this issue. As they are descending to rescue Jonah’s hidden gold, Gina (who apparently is more than just a pretty face) makes an astute observation.

It’s a keen observation and one that rings especially true given the time travel elements in play in this series. In some ways it was always easy to dismiss the violence or strange plot twists of All-Star Western simply because of its setting. In fact, that is what makes the first issues of the series so enjoyable. It dabbles in history and our notions of it, while acknowledging some romantic stereotypes like the lone gunman, bar fights, and the occasional evil spirit. Of course, that has to make us wonder if we would find all of these elements suitable for a story set in the modern day.

We get our answer later in the issue when Jonah, having rescued his legendary gold, decides it’s time to upgrade his arsenal. At a gun shop, he wants to buy a weapon but doesn’t have a license, a matter which might for might be a problem, but not for a man of Jonah’s economic status.

In the Ol’ West such an exchange would seem natural. Our romanticized notions of the time allows us to believe that owning a gun during that period was not only ok, but a necessity. In a modern setting, however, this is a much more upsetting exchange. It reminds of the accessibility of guns in a culture that has no need of them and with it the wave of violence that has plagued the country of late. What’s odd about the whole thing, and this is regardless of your stance on gun laws, is that as a culture we are okay with violence happening in the past but not the present. The Ol’ West was violent, but we also think it was kind of fun. Transpose that violence onto modern society and it suddenly becomes horrific. It’s a lot to think about and Gray and Palmiotti do a great job of broaching the subject without hitting us on the head with it. I can only hope such ideas continue to permeate this title. If that’s the case then I feel like Hex will be a great addition to the modern day DC Universe.