Spencer: You don’t just wake up the day you turn 18 or 21 and immediately become an adult. There’s no ceremony or initiation. Adulthood is subjective, and most of us spend the majority of our twenties trying to figure out just what it means, or even actively fighting against the idea of growing up. It’s a difficult transition period of our lives to navigate, and the only thing that could make it worse is throwing a multidimensional parasite and a league of evil exes on top of it. That’s exactly what Kieron Gillen and Jamie McKelvie do in Young Avengers 11; while the issue mostly sets up the plot and characters for the final battle against Mother, it’s anchored by the various characters’ viewpoints about becoming adults.

In the aftermath of a battle, Loki discovers that Leah and Mother have captured Hulkling and are planning on unleashing the Alternate Young Avengers from the mayfly dimensions onto Earth—a plan that would likely result in the destruction of all reality. Forced to enact their plan early, Wiccan uses his abilities to age Loki to a young adult, but he still doesn’t have the power needed to diffuse Mother’s curse. The only other option, he says, is to help Billy tap into his Demiurge status, if only for a few seconds. It’s risky, but fortunately Prodigy has sent out some messages and enlisted the help of nearly every young hero in the Marvel universe. Mother and Leah are prepared, though, and place a call to Billy’s parents for a little back-up.

The character who most obviously comments on the idea of growing up in this issue is Kate, who is still worried about Mother’s comment back in issue 9. Although Kate’s anxiety has legitimate basis in the fact that she might come under Mother’s thrall, it’s easy to connect these issues with the anxiety any typical twenty-something might face as they grow older: when am I really an “adult”?; I’m not ready for these adult responsibilities!; am I too old to be hanging with these people or doing this activity? As someone who’s fielded these questions myself, I appreciate her teammate’s answers:

Loki’s “you’re only as old as you feel” is a common saying, but particularly apt coming from an ageless Norse God who’s lived in multiple bodies; still, it’s Noh-Varr’s sentiment that particularly touched me. Being young can without a doubt be difficult, but our own anxieties can make things a million times worse, and in that sense, it’s nice to see Kate’s worries so easily brushed aside.

Loki tackles the issue of growing-up in a more head-on fashion by literally growing up (and eliciting an internet-wide cry of “oh no he’s hot!”), but as I said, Loki’s age does little to dictate his behavior anyway. What interests me about this is the fact that Loki has more power in an adult body, which could be implying that adults are somehow more suited to solve this problem than young people, a theory further supported by the fact that Billy too has to grow up—into the Demiurge—in order to stand any chance against Mother. It’s a daring statement to make in an arc where the main conflict has basically boiled down to “parents just don’t understand.” Is the key to parents and kids getting along simply the kids growing up and gaining more perspective? Only time will tell, but in real life I think more compromise is involved, so I can’t wait to see what kind of curveballs Gillen throws into this mission.

Prodigy, meanwhile, seems to be supporting the opposite end of the argument by supplying an army of Marvel’s youngest and finest. This army is the antithesis of Loki and Wiccan’s plan, so it should be fun to see which strategy is more effective–or maybe if the victory comes from a combination of both, perhaps the adults and children will even be able to band together.

Or perhaps I’m just reading too much into it. That’s entirely possible, because I can’t seem to figure out how to apply these twenty-something woes to Noh-Varr. 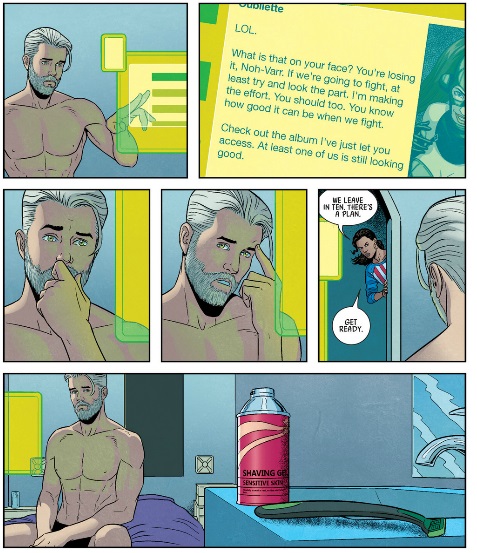 I’m a little unclear on what’s actually going through Noh-Varr’s head in this scene. He ultimately shaves the beard off; is it because Obuliette’s words hurt him, or because she made him realize the beard didn’t look good or was just a way to seem more adult or embrace Earth culture more, or is it something more obvious, like maybe Noh-Varr simply still has a thing for these girls (though how someone could pick Obulette over Kate Bishop is a mystery)? I am legitimately not sure what to think here, and I’d love to hear thoughts from you guys.

Meanwhile, Leah – like Loki – also grew up rather quickly (though that’s mainly from our perspective; it was likely much longer from her point of view), but I don’t think it’s granted her the same maturity that Prodigy or Kate or Billy seems to be finding. Loki abandoned her in the past, so it’s hard not to feel a little bad for Leah, but her revenge is taking things to an extreme; she’s willing to possibly sacrifice an entire universe to take down Loki, and that’s just a tad insane, especially considering that she used to be so nice.

And hey, why is her team of evil exes going along with this? I’m sure Patri-not and Obuliette have no love for Earth, but none of the others are even batting an eyelash at what they’re going to do for the sake of revenge? I’m half expecting that either Leah or Mother has them under her thrall, but it’s entirely possible that these guys just need to grow up already.

On that note, I’m going to turn things over to our guest writer, Suzanne. Suzanne, what did you think of this issue and the characters’ growing pains? What about Loki? Even after his plans were revealed last issue, there still seems to be so much he’s keeping hidden; do you trust him at all? And hey, how about that neato page of Prodigy’s army all texting each other? Are you familiar enough with those characters to get any references out of it?

Suzanne: If Noh-Varr cheats on Kate Bishop with Obuliette, I may have to send Kieron Gillen some nasty fan mail. Just kidding. No seriously, I love what Gillen and McKelvie have done with this series over the past year. They endeared me to characters like Marvel Boy, who I didn’t know from Adam before the first issue of Young Avengers.

Spencer, my best guess is that Noh-Varr is having some identity issues and his beard symbolizes that ambivalence. His little black book is filled with exes who give him constant attention and flattery. Maybe he’s not getting that kind of validation from my favorite Hawkeye. Why else would he be talking to these crazy girls? Him cheating on her would be a perfect example of how people screw things up because of immaturity in their early twenties.

Did I mention how much I love Prodigy being on the team? He balances out their group dynamic with some calculated logic to counter Miss America’s punching, Billy and Teddy’s emo drama, and Loki’s manipulation. I’m not sure about his emotional maturity, but his intellect reaches well beyond his years. Mother threatens to destroy the world and he responds by networking with essentially all of the young superheroes of the Marvel Universe. That one-page spread is fantastic and includes some of my favorite, more obscure characters (i.e. Armor and Dust).

I admit there were quite a few references I missed (Butterball is not just a brand of turkey?). Any chance this will lead to some more recruits to Young Avengers? Granted, they only came together because Billy screwed up and unleashed Mother in the first place. But I would kill to see characters like Bling! and Spider-Girl make guest appearances in future issues.

I may be in the minority here, but Loki’s metamorphosis into an adolescent didn’t do a lot for me. He’s more intriguing as an evil character stuck inside such an innocent-looking body. Now he looks like a young Severus Snape with douchey hair. The only advantage to him being older is that he’s considerably more formidable and dangerous. But he hasn’t made any staggering emotional progress to match his physical change. He reminds me of Shazam (formerly Captain Marvel) from that other comics publisher, a selfish and immature boy gifted with a superhero body.

I agree with Spencer’s insight that this issue ties into each character’s development and their fears about growing up. Yet I couldn’t help feeling frustrated by the end of the issue. Instead of moving the plot forward, the team talks about their plans to take down Mother ad nauseam.  It feels like being stuck in a meeting all day talking about the job you’re supposed to be doing. I’m grateful Miss America got at least one punch in this time. Bring on the final battle against Mother!